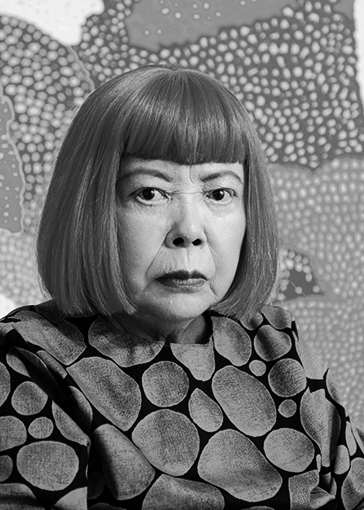 The healing power of art exists. Many artists and sector professionals have been singing the praises of its therapeutic properties for both the body and mind for centuries. Now we have the proof. A recent scientific study conducted at the Santuario di Vicoforte by Prof. Enzo Grossi – Professor of Quality of life and promotion of health at the University of Bologna – has shown that art and beauty have a positive effect on our health.
A sample of saliva was taken from 99 people before they were allowed to enjoy the view of the Sanctuary and its magnificent elliptical dome – the largest in the world – and another immediately after the visit. The surprising results of the test show that during the aesthetic experience the level of cortisol, a hormone associated with stress, decreases sharply.
This happens to those who enjoy the art of others.
But can beauty have a curative effect on its creator?.
The example of Yayoi Kusama gives a positive answer to this question..
Before coming to have a decades-long influence on the entire art world, as a child this extremely well-known eclectic Japanese artist was afflicted with various neuropsychiatric disorders which led her to obsessive behaviour both in acting and thinking. Art was her escape valve.
Already at 10 she began to paint compulsively and to portray her dreams and above all her nightmares on canvas. Her hallucinations were so frequent and powerful that soon the young Kusama was convinced that they were real. She began to interact with the objects surrounding her and the line between real and imaginary art became thinner and thinner until it disappeared altogether.
This is where her obsessions, fears but also her innermost desires started to enter into her work.
At first her paintings were filled with biomorphic elements in the form of orifices and vaginal symbols, then these elements changed shape and became jumbles of indistinct objects – almost biomorphic nerves – composed of multitudes of squares that gradually went on to fill the different media used. In this way she was able to channel her suffering within this creative whirlwind, allowing it to give vent to an obsessive-compulsive continuum of endlessly repeated shapes.
Despite her mother’s strict prohibitions, the young Yayoi continued to give vent to her frustrations through painting.

The first examples of what would go on to become her immortal trademark appeared at the start of the 1950s.
The little squares that broke up her canvasses and transformed them into fragile glass plates seemingly ready to shatter were replaced shortly thereafter by tiny dots.
Unlike Impressionist pointillism, her polka dots completely fill the space of the pictures without creating real images and they were neither mechanical nor depersonalized executions.
On the contrary, these small entirely handmade forms fully symbolized the artist’s passionate, tireless and endlessly restless soul. The polka dots continued to grow and needed more space and Yayoi thus began the series of Infinity Nets, large scale canvasses dotted with a dusting of Kusama Dots. The number of dots increased dramatically until they spilled over from their medium, invading the easel, the floor and everything they touched, like measles spots infecting everyday objects and even people.
The Polka Dots War started, everything and everyone could be invaded, there were no prisoners. Well actually, yes. Yayoi looked for new forms of expression and imprisoned visitors within her Rooms, in which mirrors amplified the presence of her inevitable dotted shapes to infinity. Here the public were catapulted into her obsessive world, experiencing her feelings, anxieties and at the same time her relief.
But even this wasn’t enough for the artist, she wanted to take her art out of the galleries and let it leave its mark on the whole world and so she began to display in unexpected performances in public where the protagonists were her and the Polka Dots, occasionally some performers and even the public itself. Her happenings were always different but they had one common denominator: the overwhelming or purification and dematerialization of all that they invaded.
The “anatomical explosion” as she herself defined it had a powerful effect on everything: the worlds of painting and drawing, sculpture, performance, installation and even environmental art. But the real revolution took place when Kusama encountered the product design and fashion industry. Not in terms of style but in the spirit with which she approached her art.
The early years of the new millennium saw the advent of collaborations with highly significant fashion industry names.
It was here that her artwork was transferred to the creations of Issey Miyake and later also onto bags, clothes, shoes, accessories and jewellery by the designer Louis Vuitton.

The artist’s trademarks – Polka Dots, the biomorphic nerves, the infinite network – extended to the great classics of the French fashion house creating a unique collection, a symbol of how art can lead to other channels and reach the public in constantly different and innovative ways. In this case the visitor is, however, a buyer, who thanks to the collaboration between Yayoi Kusama and the former artistic director of Louis Vuitton, Marc Jacobs can afford to take home an original work of art at a much more affordable price and feel it on their skin every day.
Besides the products she also dedicated herself to leaving her mark on the storefront windows of the fashion house, creating artistic installations which at the same time aimed to present the collection through its unique design. This then is the artist’s real Pop breakthrough, in which her polka dots become mechanical and 100% pop-ular. At this point, critics were divided: the artist’s stylistic consistency was absolutely impeccable for sure, but could you say that this commercial turning point had undermined the very purpose of her art – or rather the channelling of her obsessions – or was it just a different and more extensive way of expressing them? Posterity will judge.
The Kusama explosion thus spread through time and space, affecting everyone and everything. It started in the last century and we feel its effects even today.
Yayoi Kusama recently stated “The earth is a dot. I am a dot. The moon is a dot. The sun is a dot. The stars are dots. Dots are innumerable, infinite, that’s why my life has been a continuous struggle for the creation of my art”.
These words perfectly explain the reasons why for some 70 years the artist stubbornly and consistently continues to fill her life with Polka Dots. We cannot know if art has really cured Kusama of her ailments, but we do know that the fight against her demons has been overcome through the battle for creativity and that her works have protected many of us from our own high levels of cortisol or at least, have sharply lowered them. 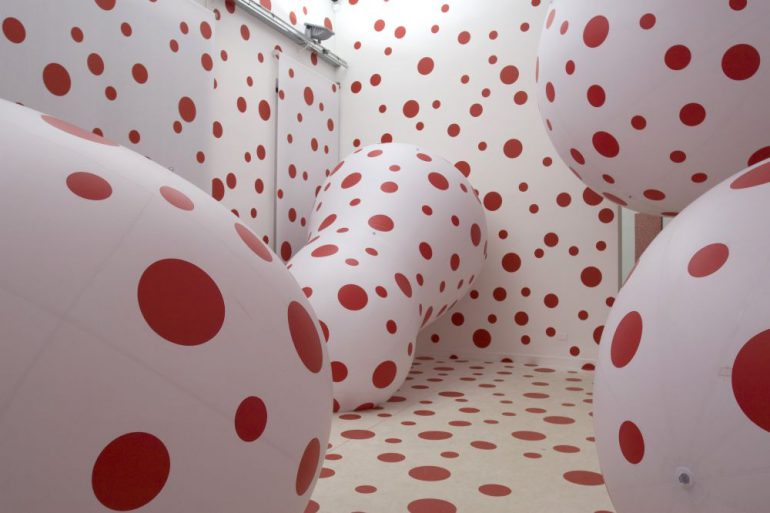 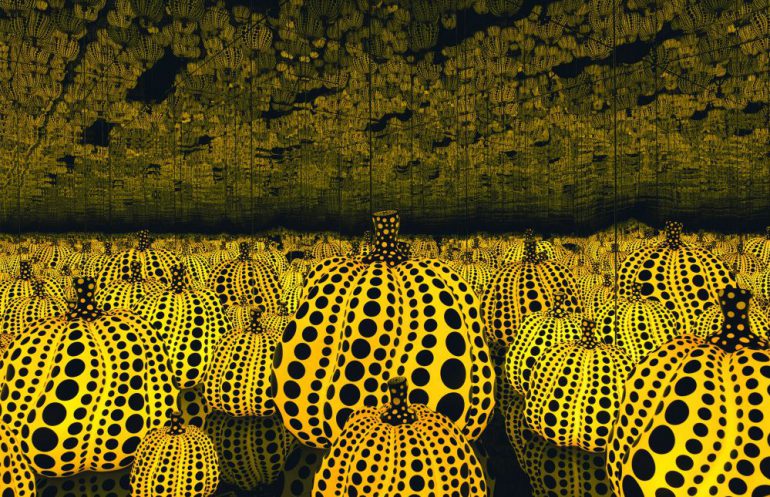 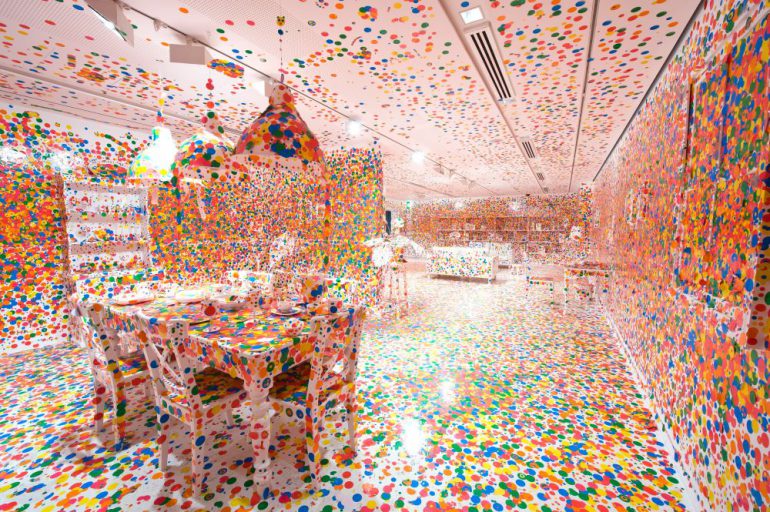 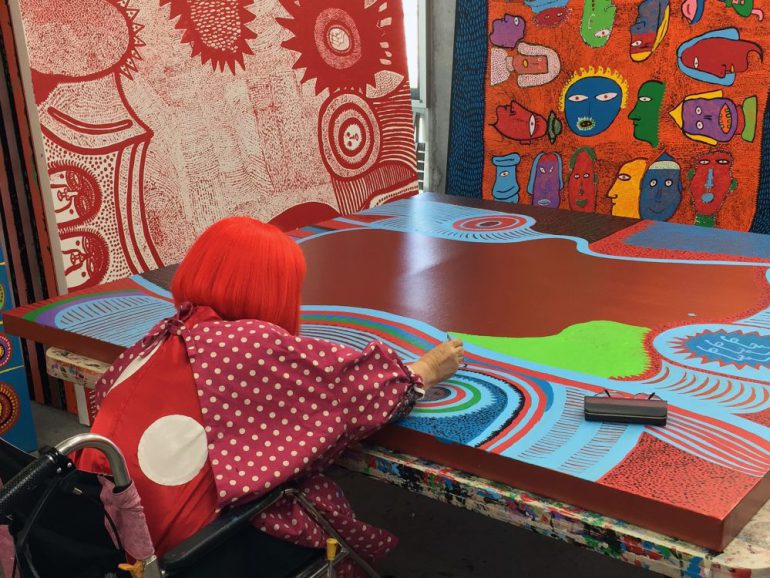 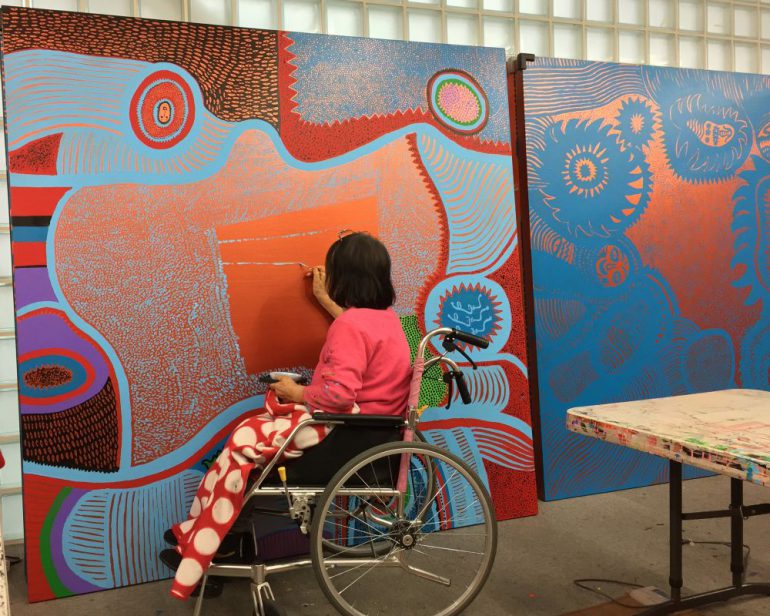 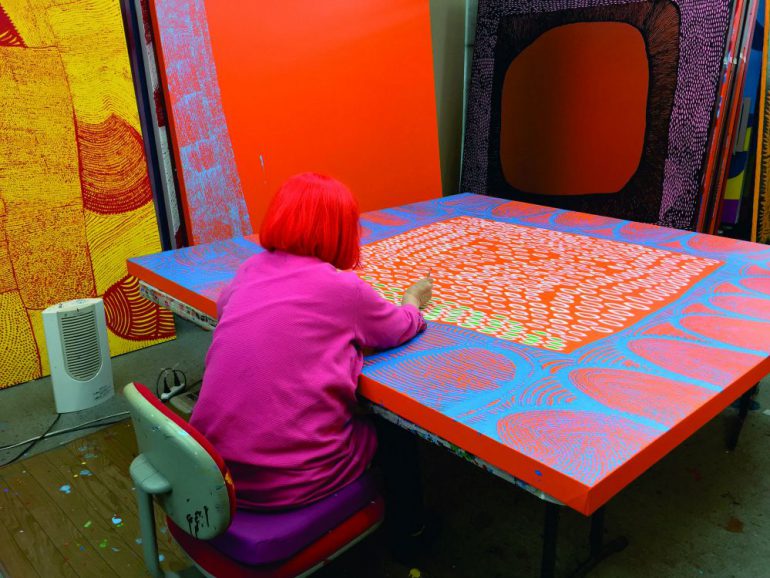 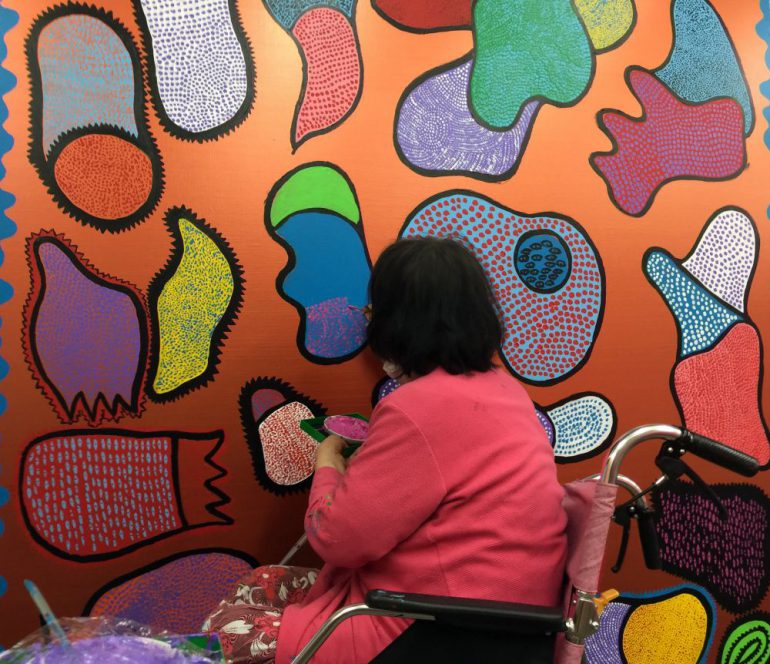 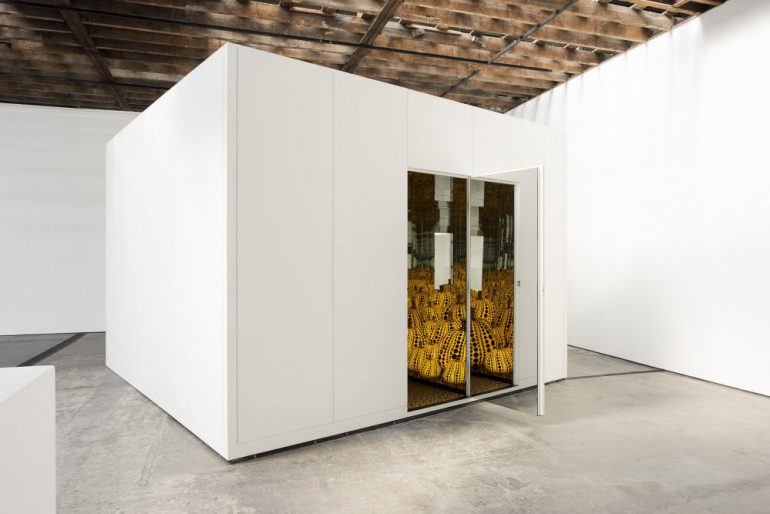 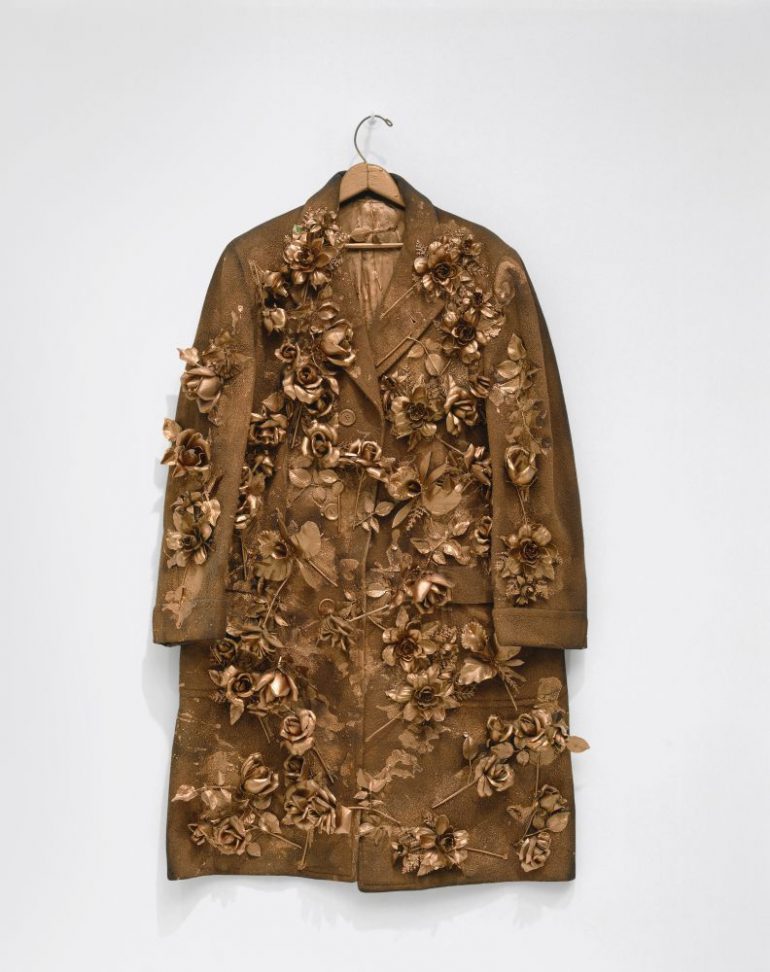 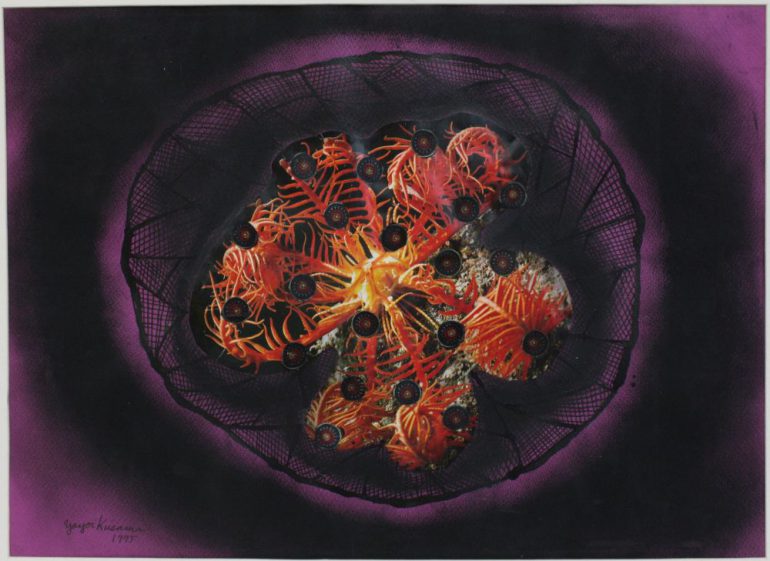 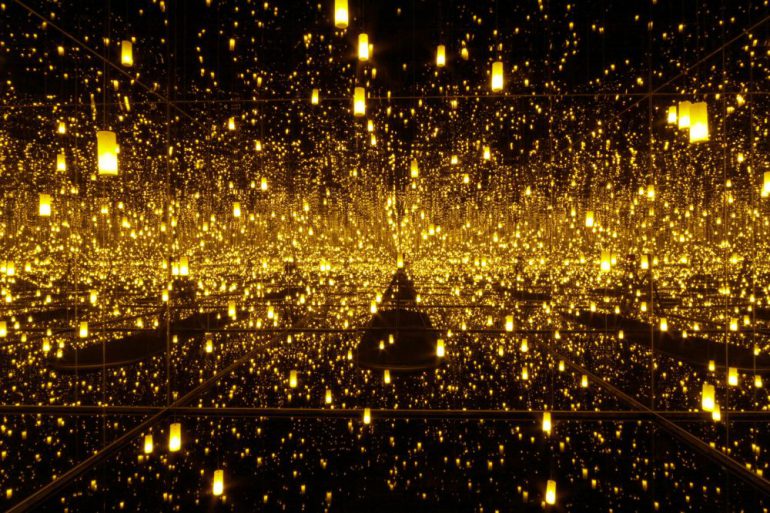