To provide the best possible service, we use cookies on this site. Continuing the navigation you consent to use them. Read more.
PROJECTS
·17 November 2020 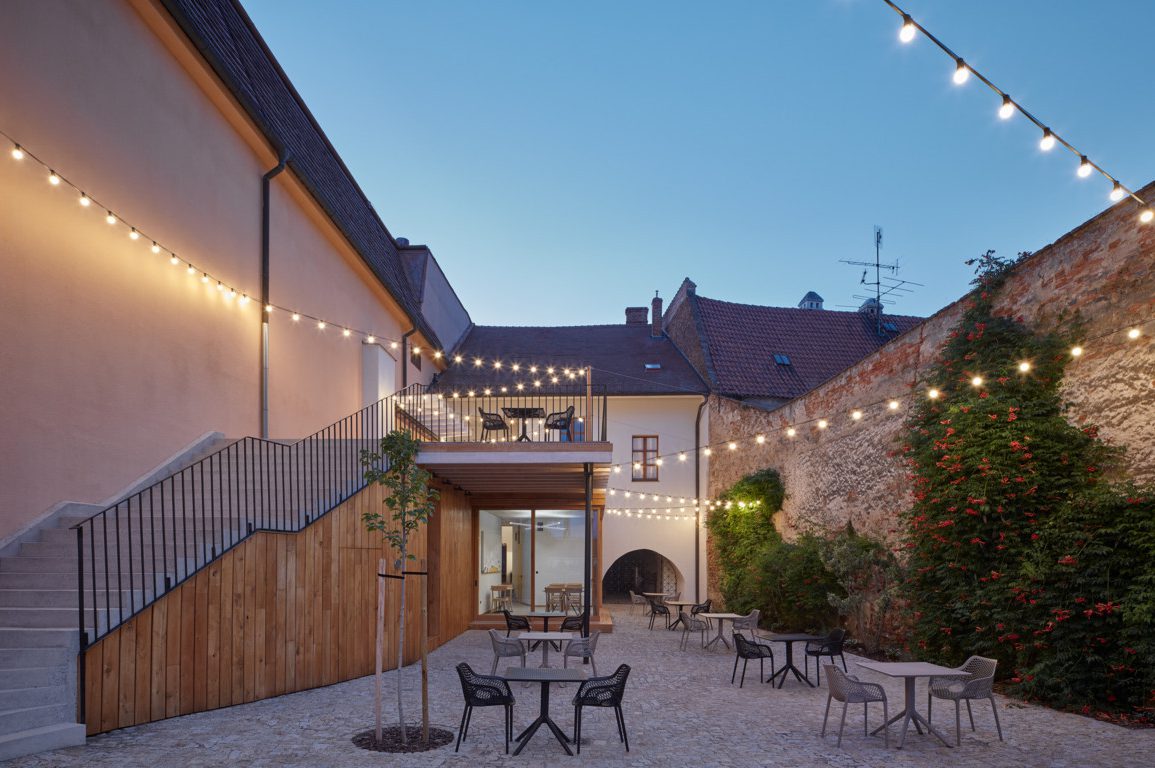 A winemaker approached Studio ORA – a young studio based in Znojmo in South Moravia in Czech Republic – with his dream of creating a prosperous winery in the heart of Znojmo in a Renaissance house on Masaryk Square. The task was to create a place where wine would be produced, sold and tasted, and at the same time, there would be feasts, events and accommodation for guests. Such an ambitious program forced us to make use of every centimeter of all levels of the townhouse, its courtyard, and the cellars adjoining the Znojmo underground.

Five years ago, the reconstruction began with a small wine bar. The space under a pair of cross vaults is naturally divided into two parts. At the entrance, there is a seating area for guests, with a distinctive chandelier in the shape of a cross and a long bench. The architects illuminated the vaults, otherwise leaving them intact. The basic motif of crossing permeates the entire interior.
The passage has become the main entrance, the crossroads of all operations, the warehouse of winemaking utensils and technology, a place where the wine matures in Georgian ‘kvevri’, ceramic vessels built into the floor. The passage is the entry point into the accommodation on the first floor. It is also open for larger events, serving as the central passage leading directly to the courtyard.

The yard is the most outstanding quality of the project. The narrow plot is situated between a pair of high walls. The first beautifully weathered stone wall belongs to the former Capuchin monastery. By contrast, the second wall is bare, belonging to a vast cultural centre from the late ’80s that has not been in operation for many years now. The walls frame a magnificent view of the Capuchin garden and the representative courthouse. The architects further supported the view by lowering the enclosure wall and demolishing sheds standing in the courtyard. An operational necessity was to design an extension with service rooms in the yard. The studio decided to cling to the ugly wall of the cultural centre and thus set it aside, making the monastery walls stand out as much as possible.

The extension stands in the footsteps of the former courtyard wing which was destroyed during the war. The only part of the former wing still standing today is the cellars which the architects designed to be used for the production premises. They designed a contemporary pavilion hidden from the outside, the roof of which is an observation terrace and an extension of the courtyard space. It is connected to the courtyard by an expanding concrete staircase.
The cellars are entered through a secret door in the facade of the extension. In order for the underground to retain its authenticity, the studio left it almost without interference. Barrels are located on the second floor of the cellars, and the Znojmo historical underground is directly connected to this part.
For further information, please visit www.o-r-a.cz. 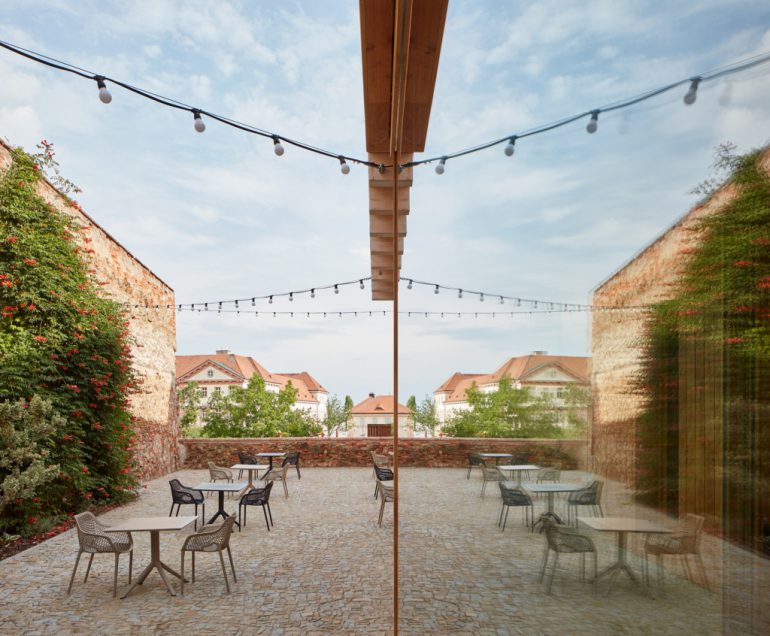 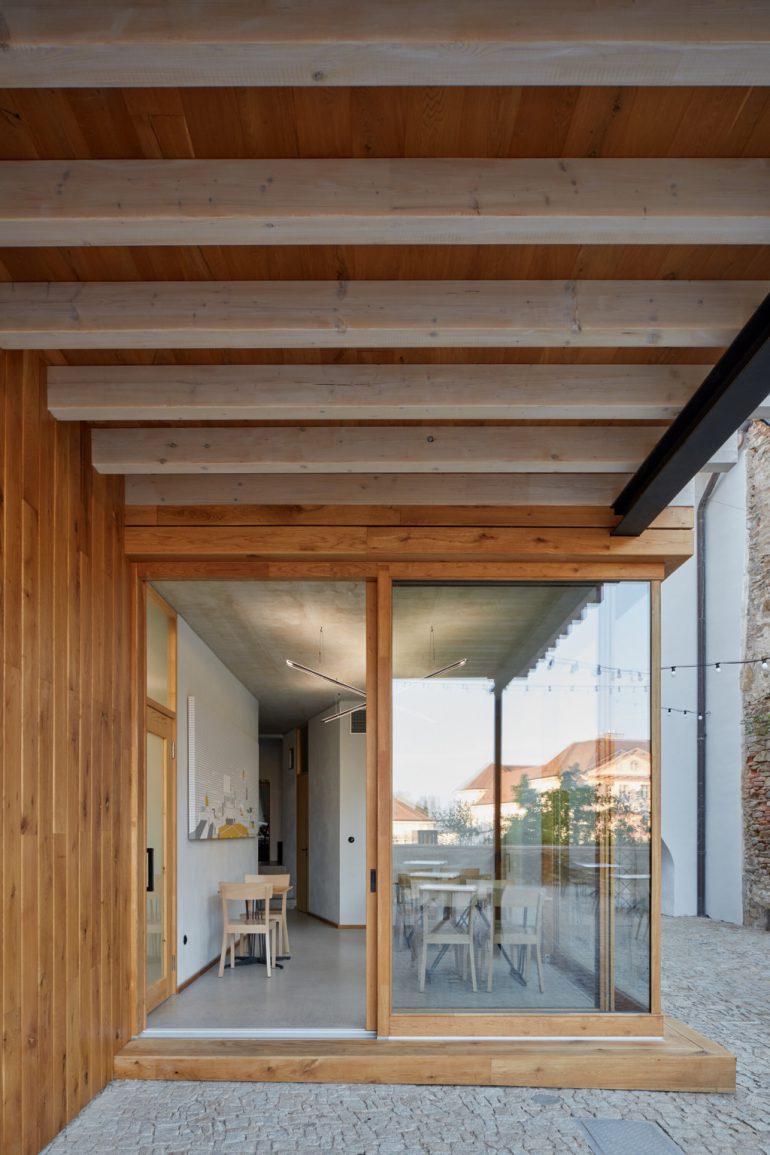 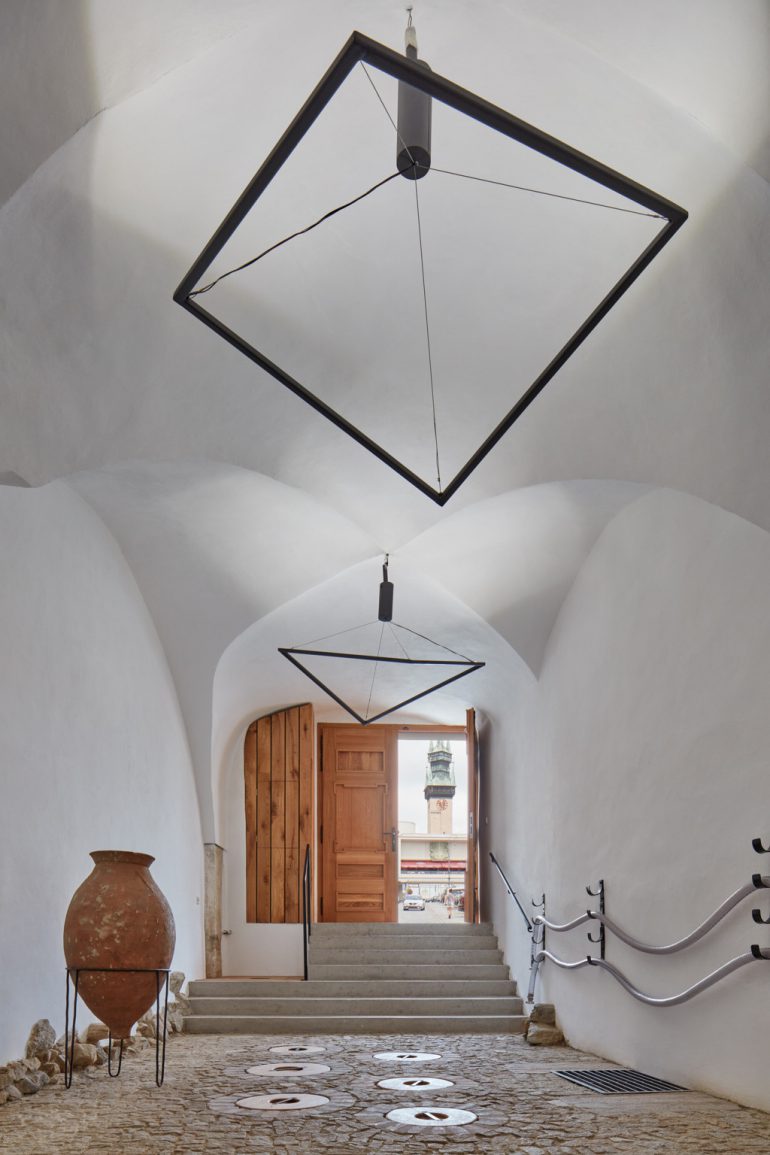 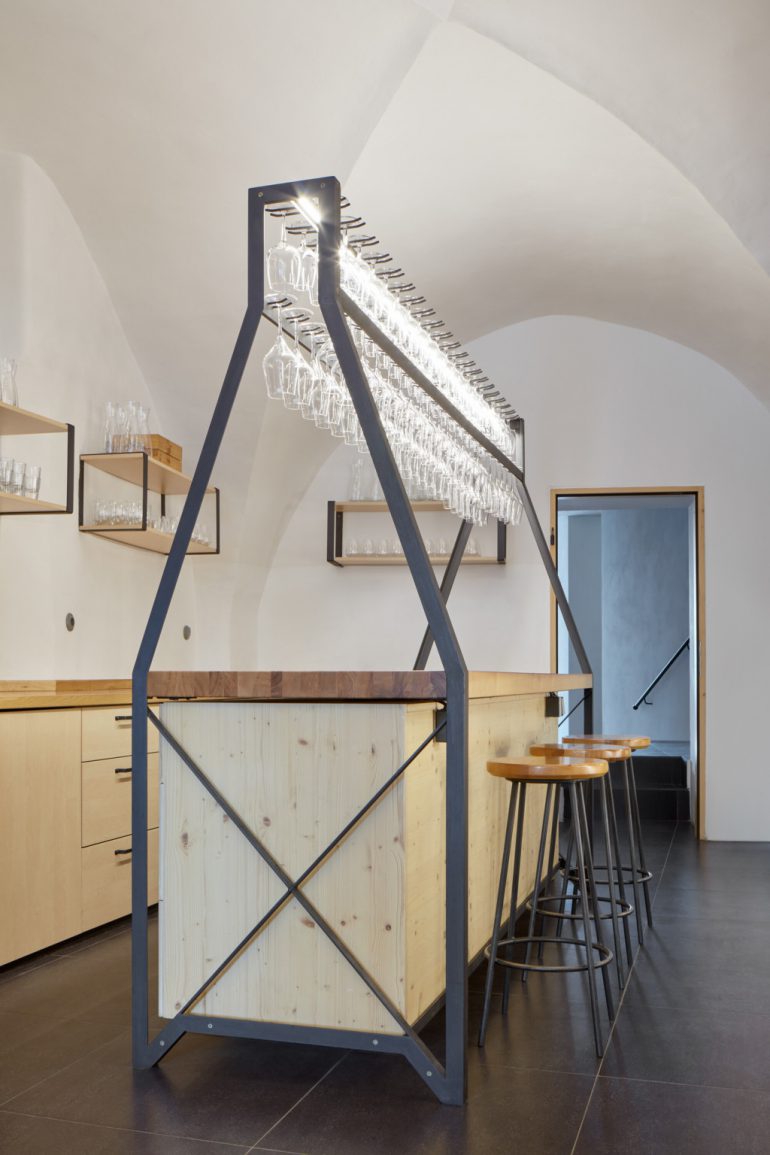 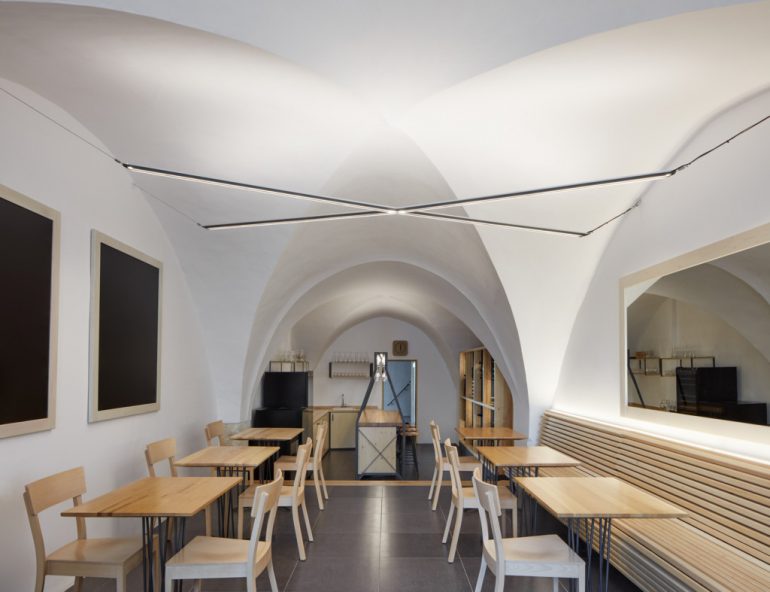 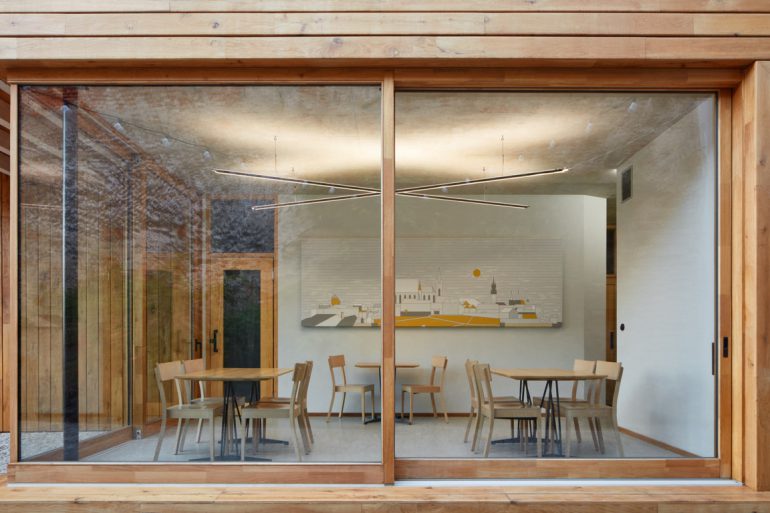 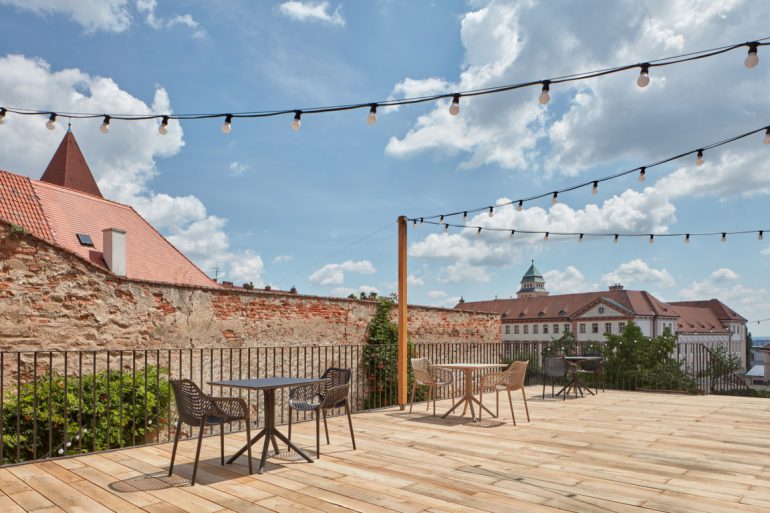 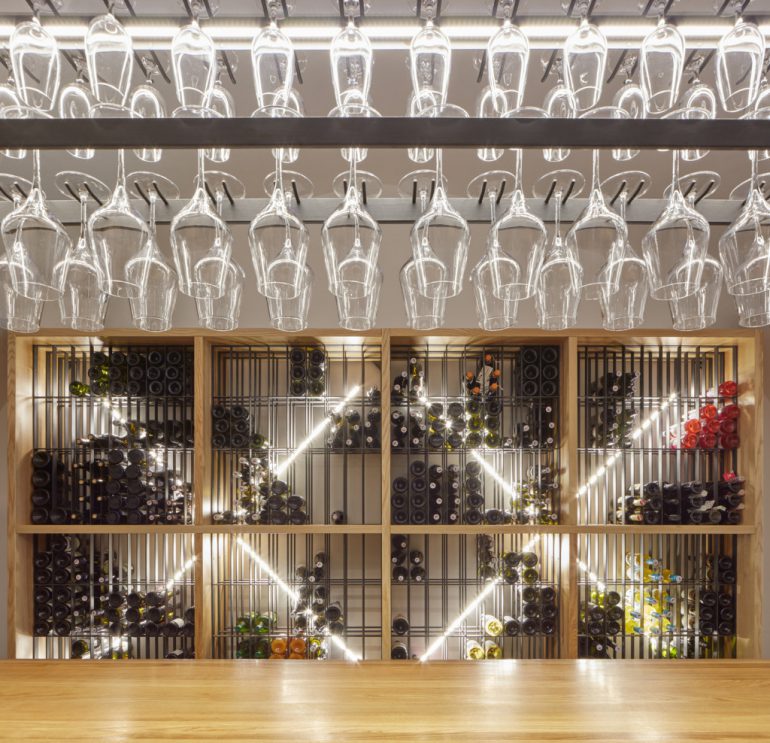 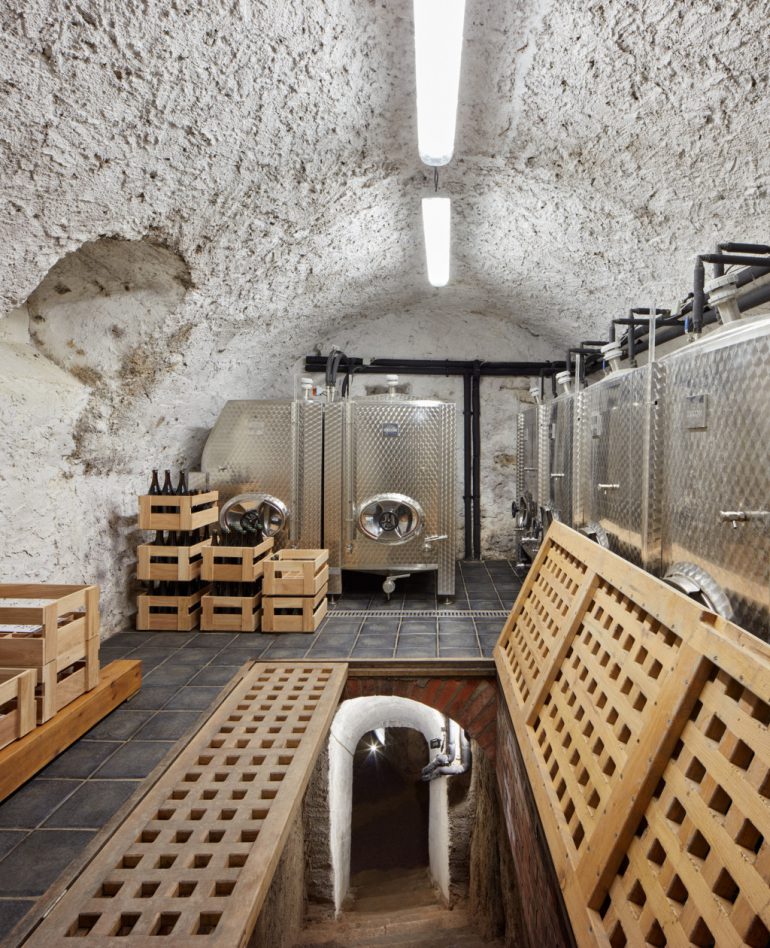