To provide the best possible service, we use cookies on this site. Continuing the navigation you consent to use them. Read more.
PROJECTS
·14 December 2020 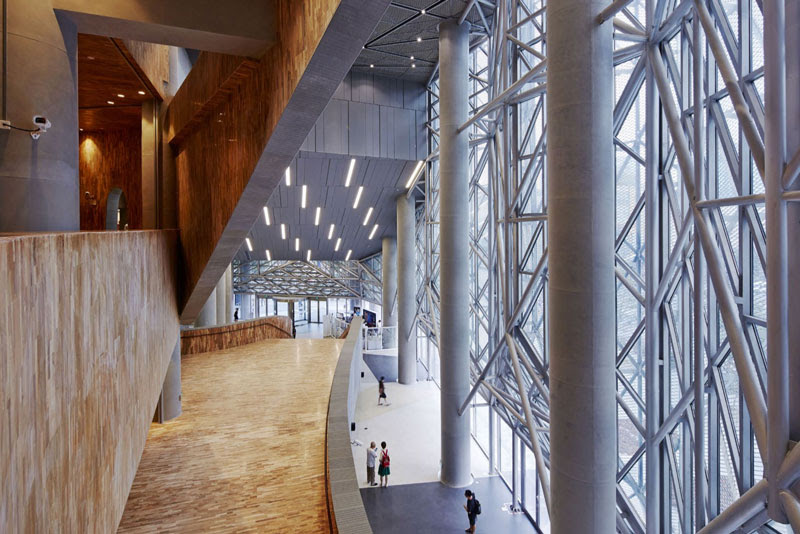 The Shanghai Hongqiao Performing Arts Center project was designed by BAU (Brearley Architects & Urbanists), and is located on Tianshan Road, one of the newest shopping streets in the Hongqiao district in the centre of Shanghai.
In this chaotic, frenetic scenario of lights, shops and glitz, BAU opted for the “less is more” philosophy when designing the Arts Center, a process that took five years.

The building replaces the old state cinema, and becomes a place where the traditional and the modern merge, housing both a theatre (1000 seats) and several cinemas (seven rooms of various capacities).
This transversality offers visitors the possibility of contaminating their passions, of involving them in new experiences.
The two sectors, theatre and cinema, come together physically in the centre of the structure, a square where visitors gather, the diversity of programmes is emphasised and the fusion of the two arts is encouraged.

The structure is built like a rock monolith, a material used for traditional projects, with articulations of curved lines and a spectacular staircase.
The cinema area is composed of metal “containers” stacked together, recalling the style of the 20th century.
The central plaza features ticket offices, exhibition spaces for events, cafés, and an exceptional view of the surrounding landscape.
In contrast to the hardness of the exterior, the interior of the building has walls and ceilings covered in wood, while the floors are made of local stone with a texture similar to that of wood.
At the rear are rehearsal spaces, support services and changing rooms for the artists.

The project also faced technical difficulties, which made the development a kind of puzzle.
BAU had to include the mandatory safety requirements for an earthquake, which is common in the area.
In addition, the underground line 15 crossing is located adjacent to the building, so a cantilevered structure was created along the north-eastern boundary.
Lastly, the size of the building was designed to avoid obstruction of the light on the surrounding buildings.

The project meets the standards proposed by China’s Ministry of Housing and Urban and Rural Development (MOHURD) Green star accreditation, including renewable energy facilities. These include solar panels, air source heat pumps that produce hot water for the building, and the reuse of rainwater collected on the building’s roof.

One of the goals of the Art Center is to communicate the value of its design to the outside world and share the feeling of welcome.
For this reason, the sides of the structure are entirely made of highly transparent glass, while the flooring is virtually continuous between the lobby and the outside.
Finally, the square at the southern entrance of the building hosts informal performances for all passers-by. 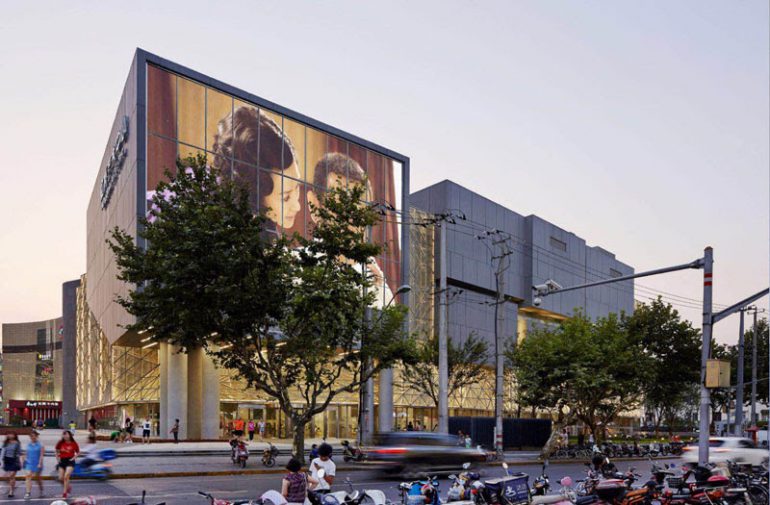 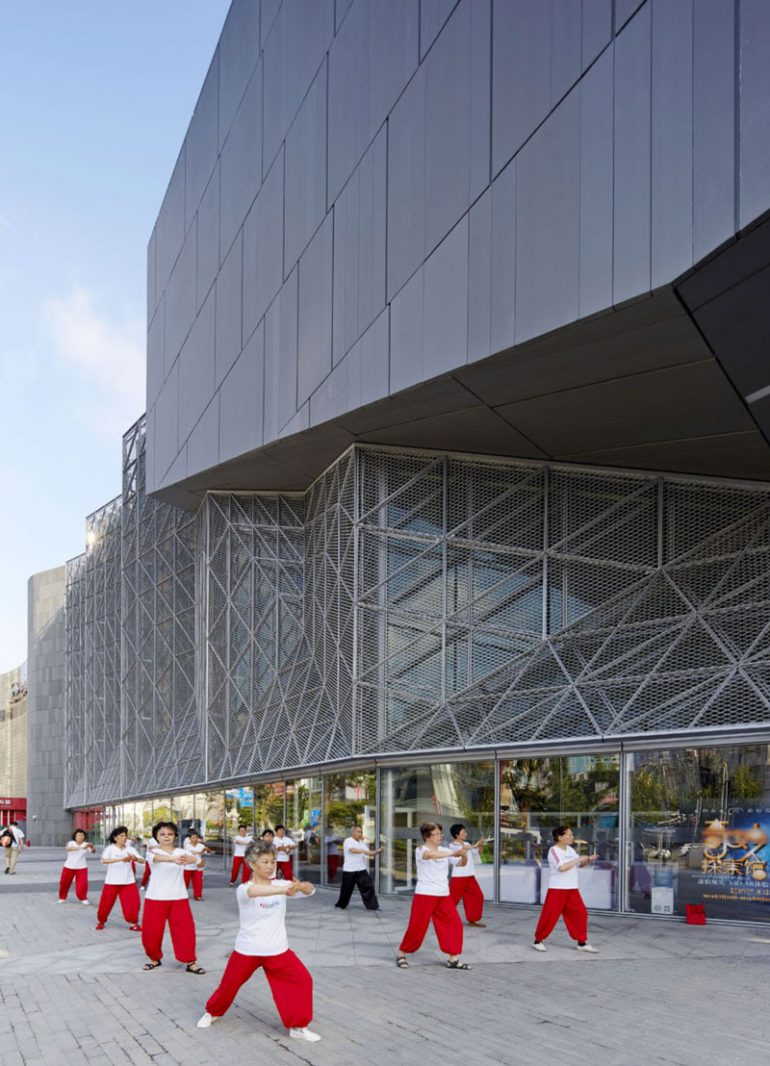 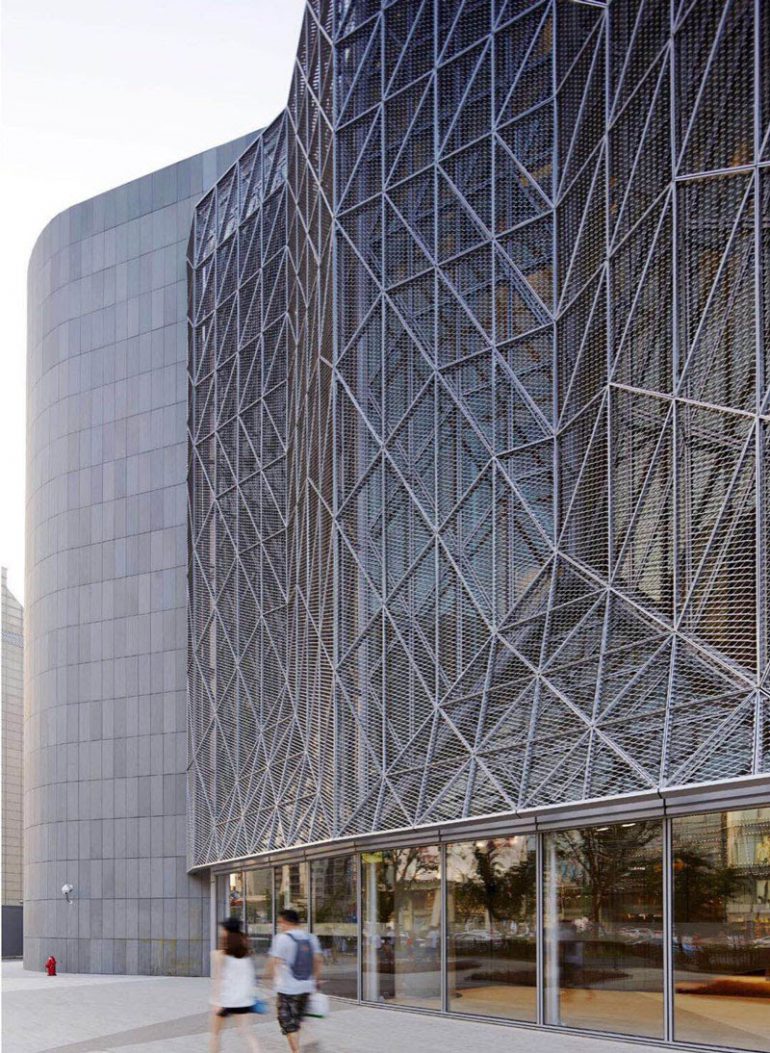 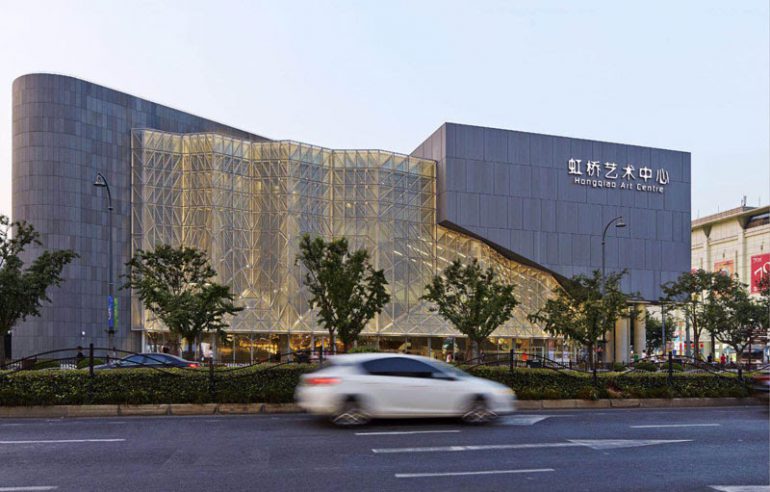 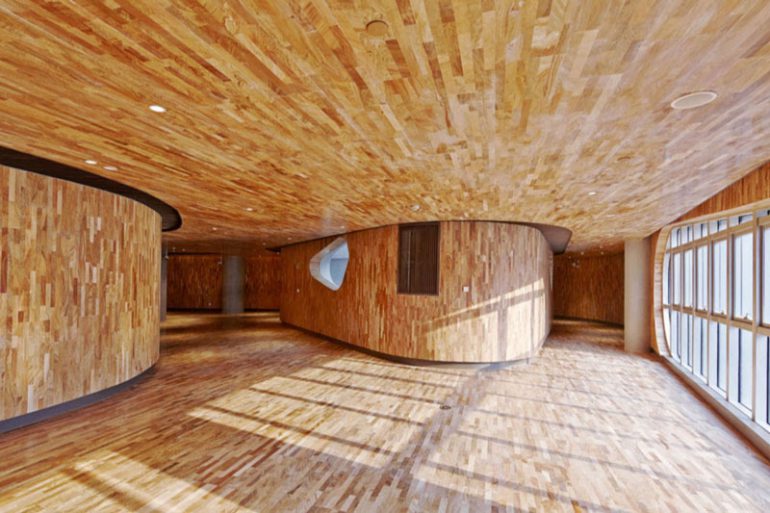 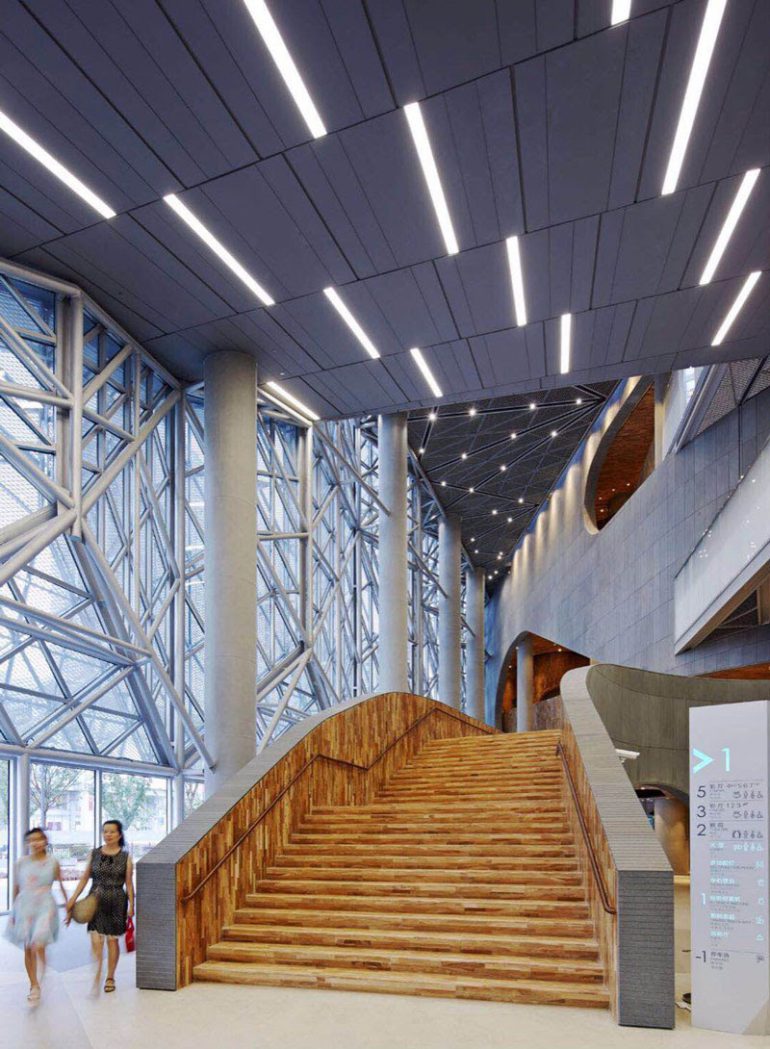 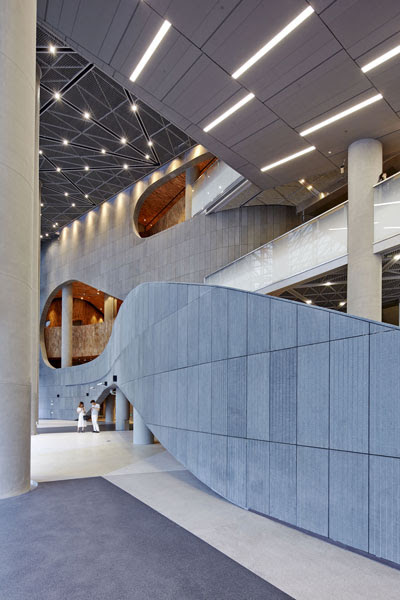 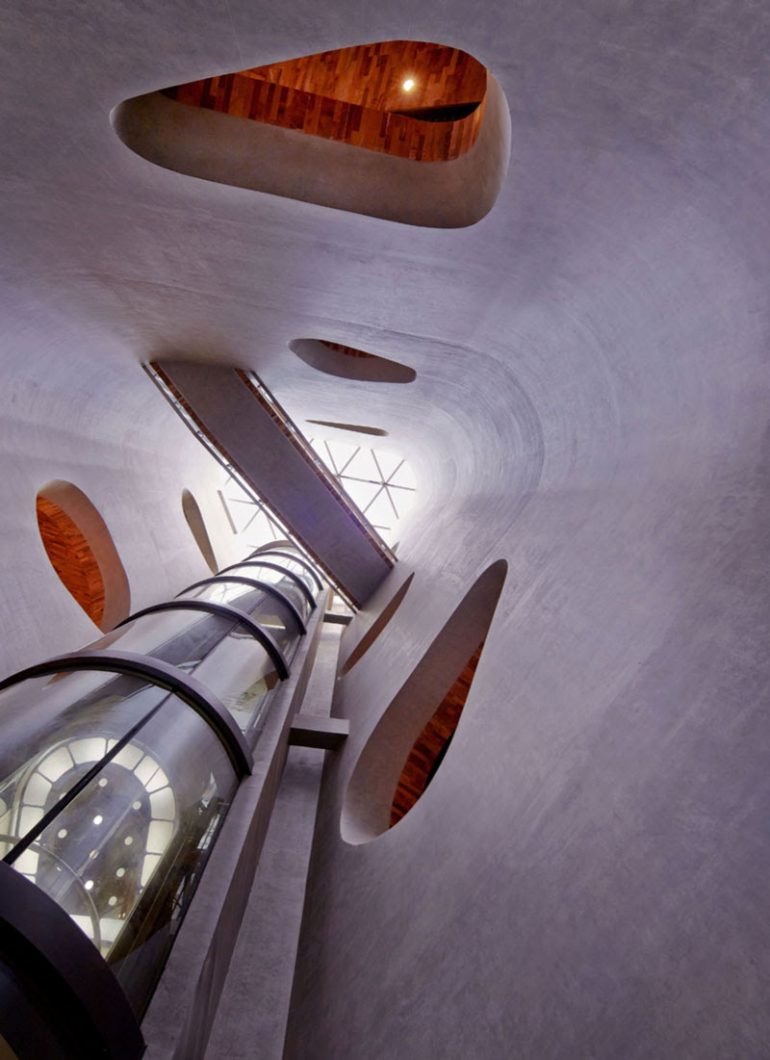 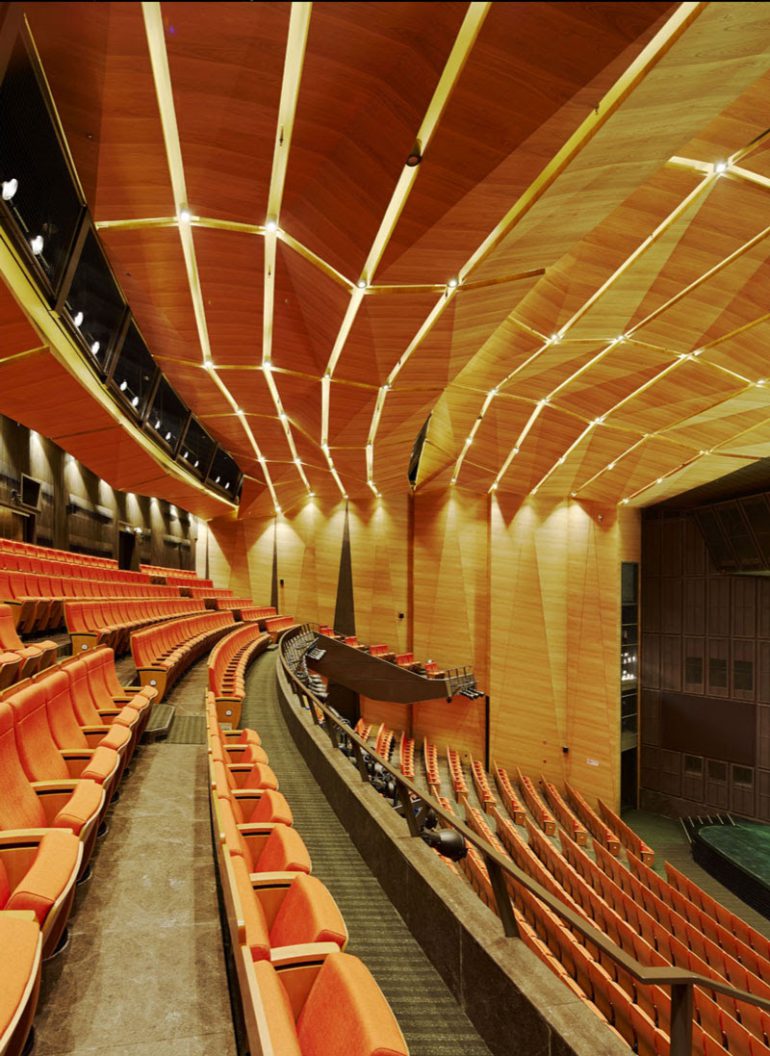