To provide the best possible service, we use cookies on this site. Continuing the navigation you consent to use them. Read more.
PROJECTS
·1 March 2021 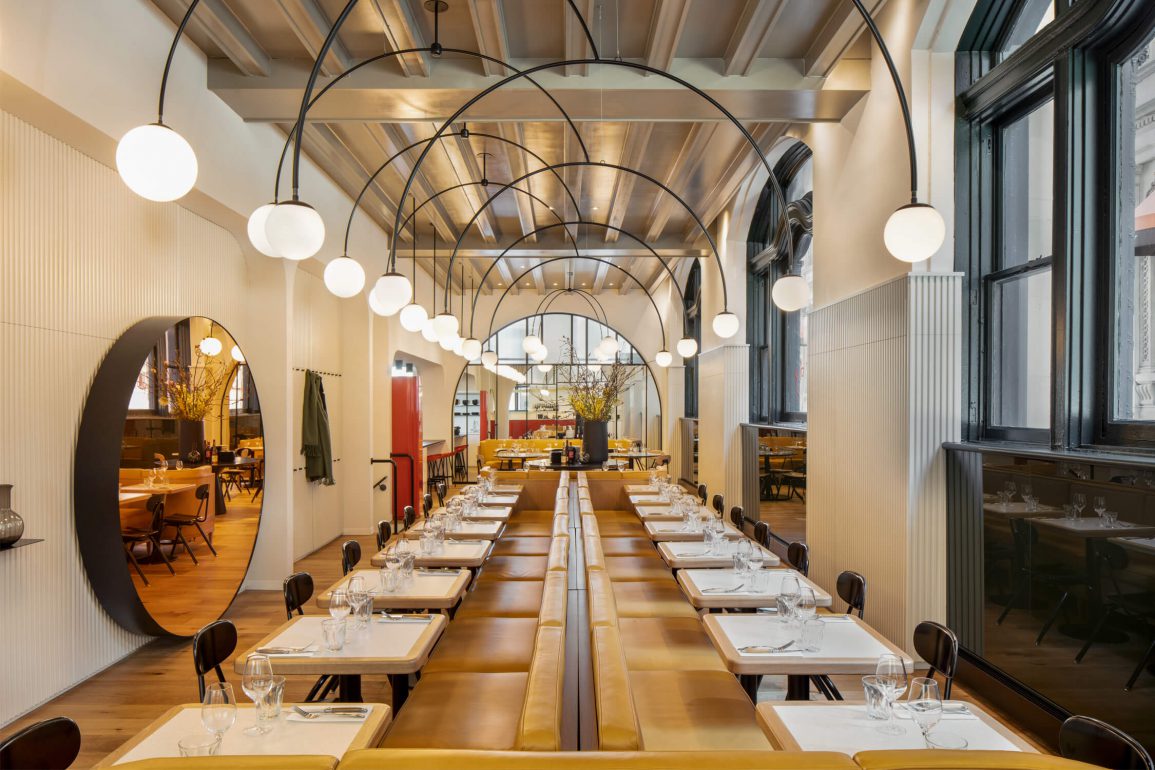 Prestigious interior designs, distinctive and elegant features are the goals of the studio BlazysGérard, a dynamic team of professionals led by Alexandre Blazys and Benoit Gérard and their uniqueness, capable of creating impeccable and timeless structures.
And it was BlazysGérard’s studio that the former chef of Olive et Gourmand and Le Club Chasse et Pêche turned to in order to create a welcoming design for his new restaurant, Dandy.

The restaurant is located on Saint-Jacques St. in the old area of Montreal and offers its service during the day.
The designers therefore decided to create a bright, simple and people-oriented space.
The building was originally an insurance office and has been transformed into a large room with huge windows. However, the former function as an insurance company inspired the designers to insert a bank-like service counter, completing the dining room with two rows of banquettes and the kitchen at the back of the room.
The dining room is highlighted by two large arches, which maintain the style of the curved windows.
“We like it when the architectural language of the exterior finds its way into the interior,” says Gérard.

Among the elements that have been given the most attention is the lighting, which has been worked on as if it were a raw material. The use of yellowish accents allows the light to be absorbed, reflecting natural light and enhancing the whole environment.
On the ceiling, the beams inserted to optimise acoustics have been finished with a reflective paint, which allows light to bounce around the room.
The space is decorated by a chandelier with stems which seems to float above the dining room, illuminating precise points in the room and creating a sort of intimacy among the guests.
Because of this ample illumination, the lower part of the windows has been painted with matt varnish, protecting guests from outside glances.
In place of the old safe, a large round mirror facing the windows has been installed, which is popular with guests for taking selfies.

Energy, freshness and simplicity can be found in the yellow-orange colour chosen for the restaurant, which makes for a sunny atmosphere, while the points of activity, such as the service counter at the entrance, are distinguished by the use of the colour red.
The floor is made of white oak, while the entrance hall is reminiscent of the banquet hall with the terrace poured on site.

Dandy’s refined cuisine and chic, cosy ambience are reminiscent of New York restaurants, hosting young professionals from nearby offices during the week and offering a place to enjoy brunch at the weekend. 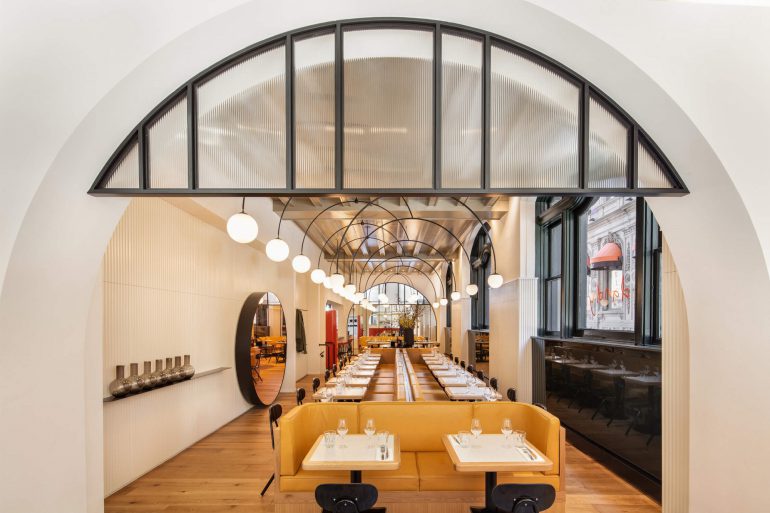 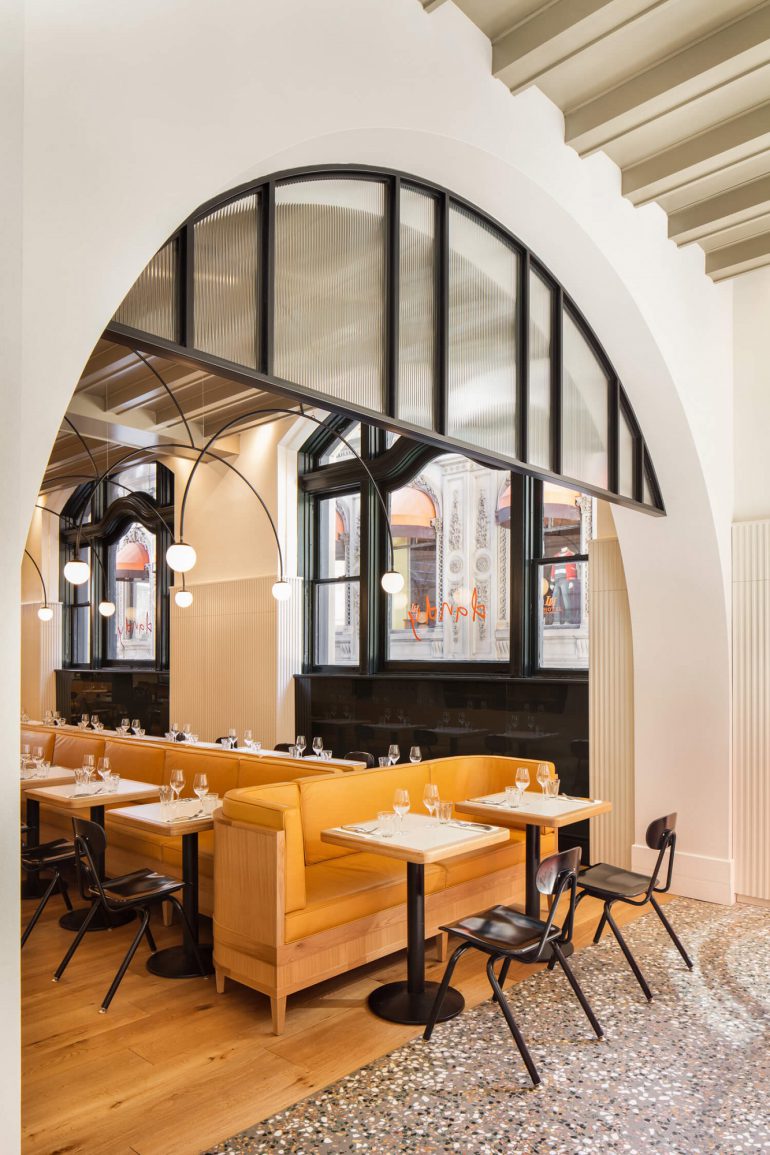 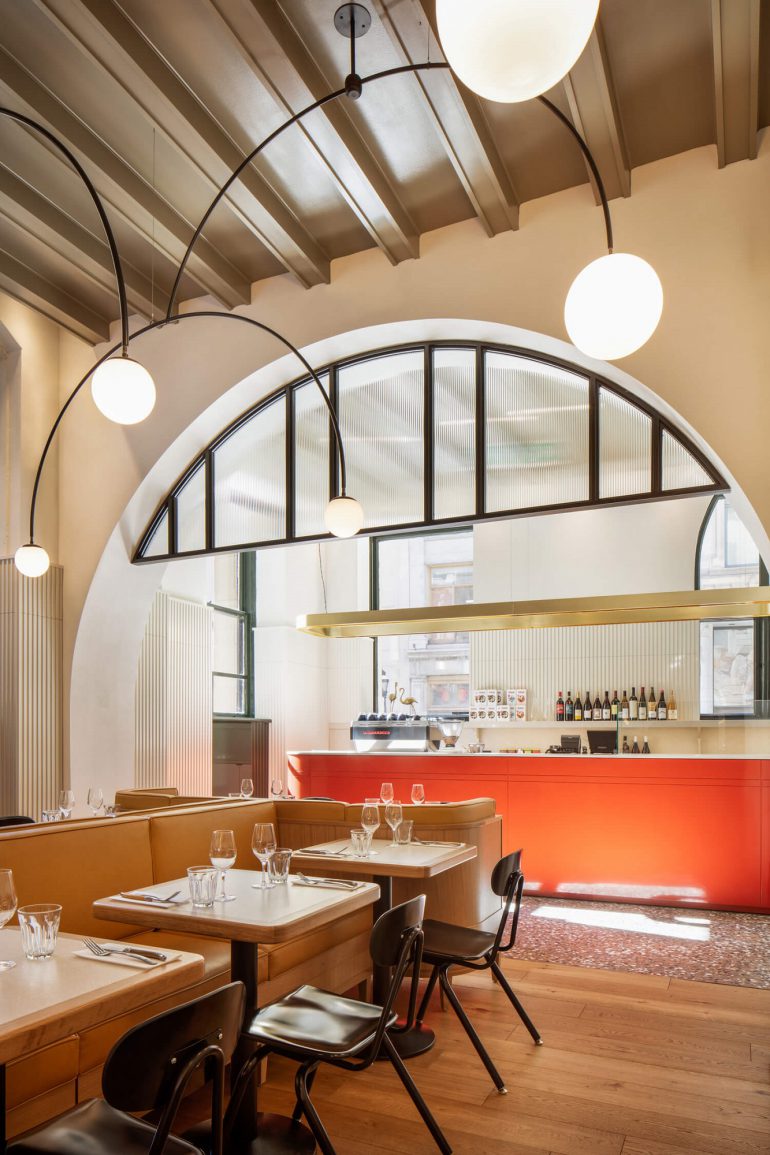 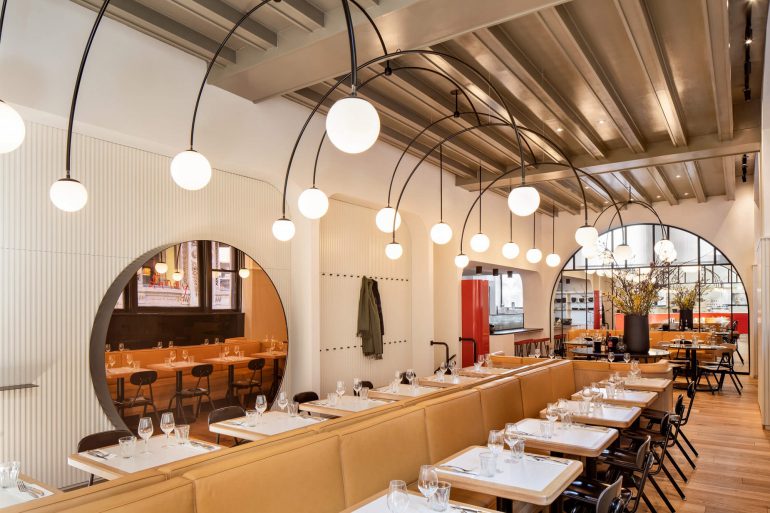 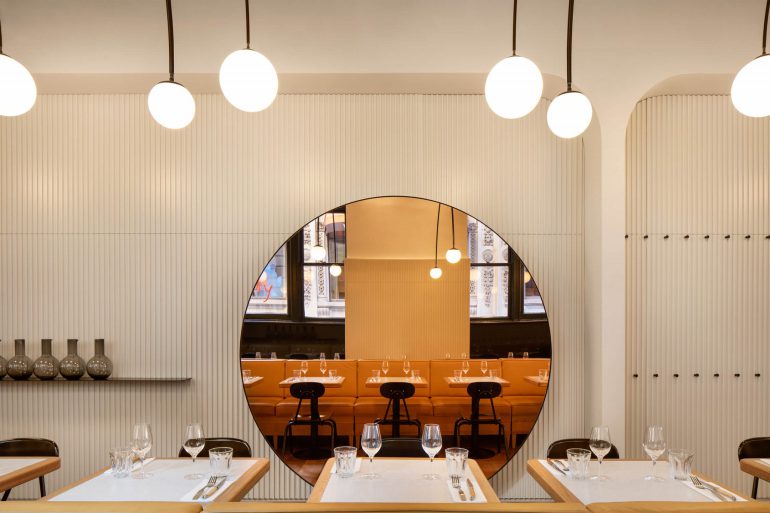 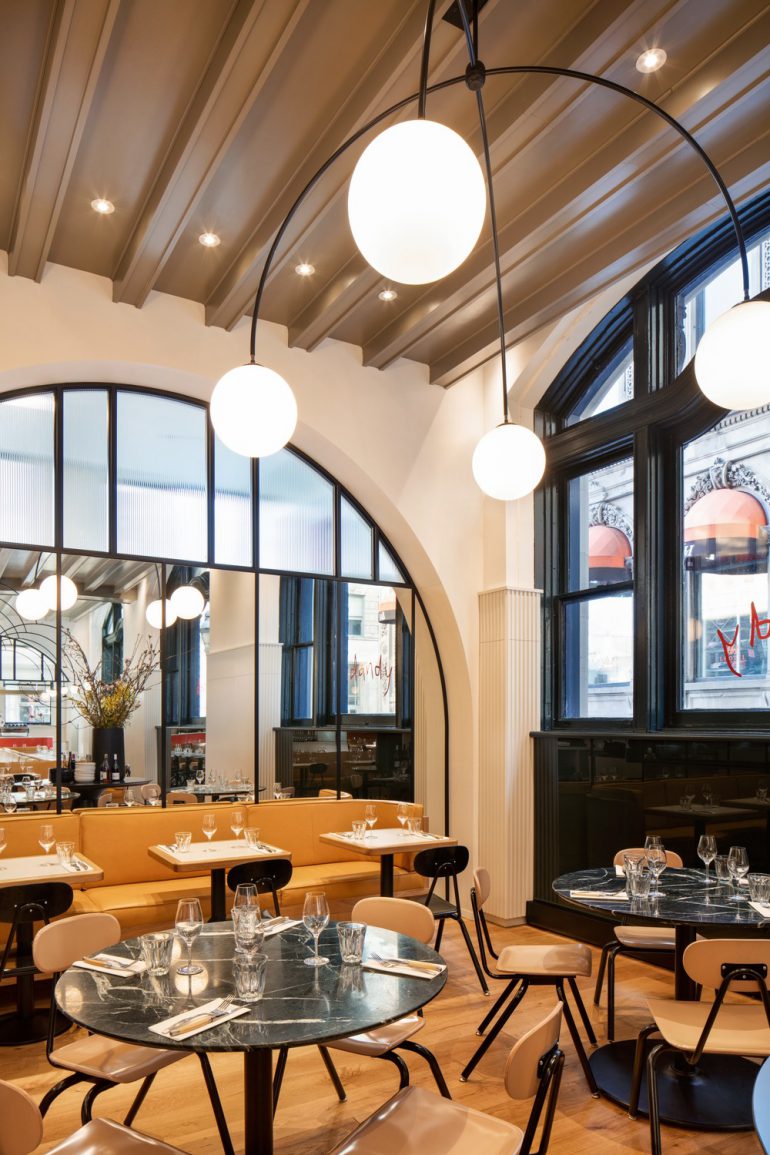 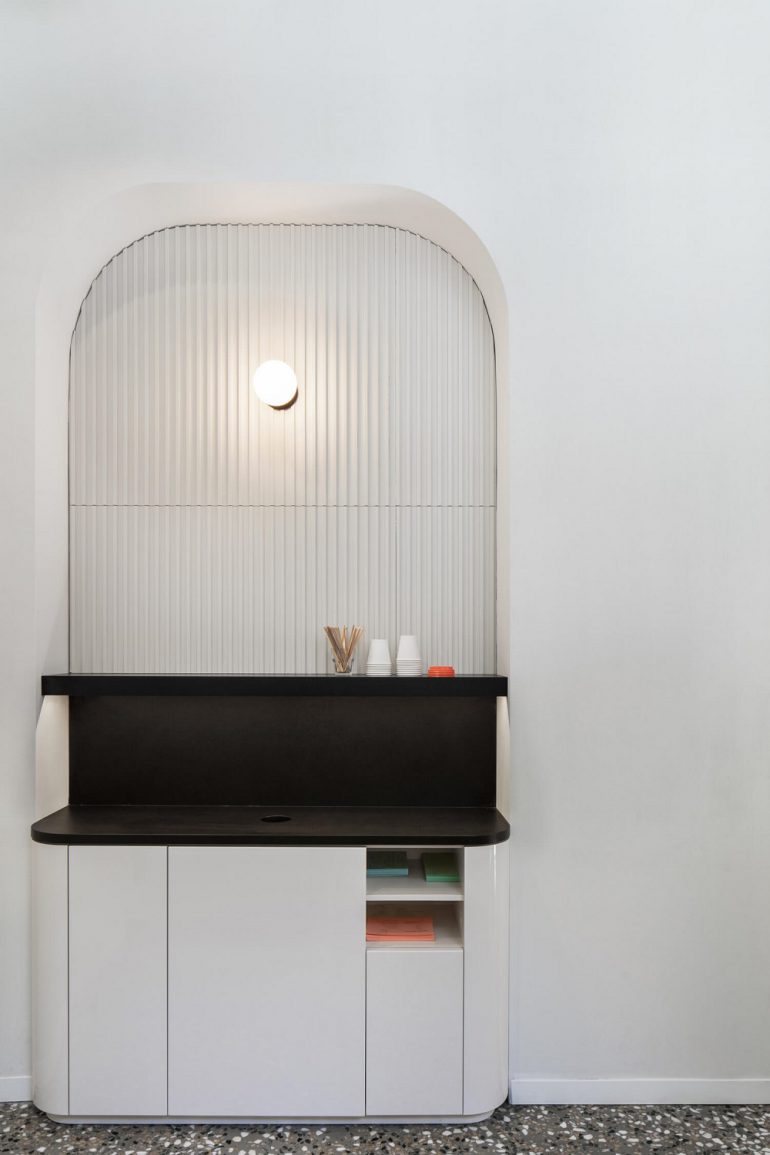