To provide the best possible service, we use cookies on this site. Continuing the navigation you consent to use them. Read more.
PROJECTS
·24 March 2021 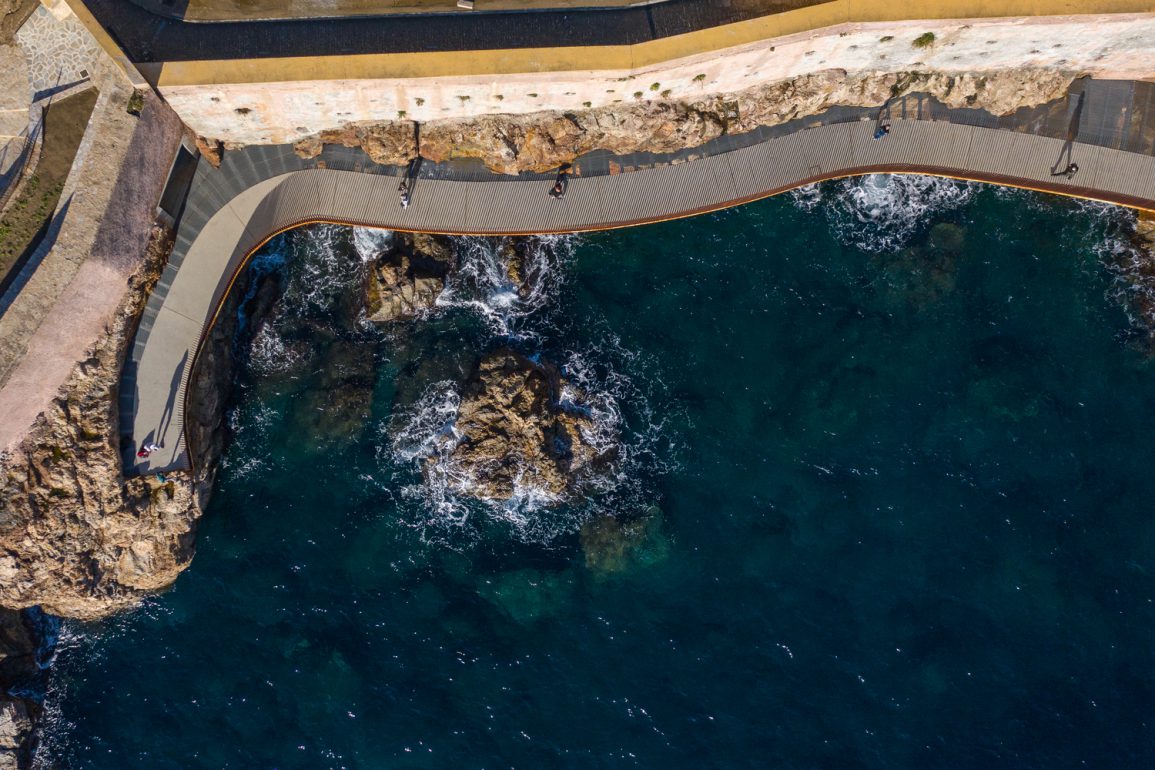 In Bastia, Corsica’s second largest city on the north-east coast, Dietmar Feichtinger Architectes achieved the promenade Aldilonda, which means “Above the Sea” in Corsican with local architects Buzzo Spinelli, Insitu landscape and the engineers of Sbp France.
Anchored in the rock, Aldilonda follows the cliffy coastline five meters above sea level. The rock forms the massive natural foundation of the mighty enclosing wall of Bastia’s fortress, which gave the city its name. Until now, the coastline under the fortress wall was only partially accessible. More than a path, a destination with new perspectives on the open sea, suspended between sea and sky, Aldilonda becomes a spectacular event.

The softly curved path contrasts the massive fortress and the rock on which the bastion is founded. The path nestles against the rock, leans against it, and breaks through it. Sensitively, the construction blends into the rocks, the rich natural space of the coast are carefully traversed.
The path widens out and offers places to rest. The sea can be experienced through the area covered with a transparent grid. The balcony is exposed to the rough surf; when the waves are high, the water penetrates the stainless-steel grid on the rock, thus reducing the massive force of the water.

Hydraulic tests in a basin in La-Seyne-sur-Mer were necessary to determine the force of the wave impact at 14 tons per square meter. Special care was also taken to ensure the durability of the materials. For example, the reinforcement density in the areas most exposed is around 400 kg/m3. The acrobatic use of workers, suspended from the platform of the fort on the trapeze, made it possible to anchor the construction in the rock. Drilling jigs had to be designed to anchor the 25-metre-long tension bars.

To keep the toe of the fortification wall, which stretches furthest into the sea, clear, the path at the south end pierces the rock in the form of a gallery, a tunnel. It connects the walkway above the sea with the “Spacimare” promenade by a gently sloping path at the exit of the tunnel. A vertical lightwell provides natural light to the passage. A staircase leads up to the elevated plateau of the fortress.
The sidewalls and the ceiling are made of fair-faced concrete. The wood grain of the shuttering is reflected on the surface. The lighting is embedded in the ceiling.

To the north, the path connects to a staircase that provides direct access to the old harbor. At the same time, a gently sloping ramp accompanies the quay wall “Jetée du Dragon” and closes off the promenade accessible to all, elderly people, people in wheelchairs, and parents with children in prams, as well as cyclists and rollerblades.
The safety is formed by narrowing uprights with a spacing of 110mm. These are made of solid Corten steel. The iron-rich rock harmonizes strongly with the rust-red of the railing. An L-shaped profile, also made of Corten, closes off the concrete on the outside of the path. The individual uprights are welded to the L-profile and follow the undulation of the path. Frontally they offer maximum transparency.   From the side, they form a band that provides a sense of safety.
At intervals of three meters, LED strips are integrated into the uprights as lighting. They discreetly illuminate the path and the rock in the lower area of the walkway. 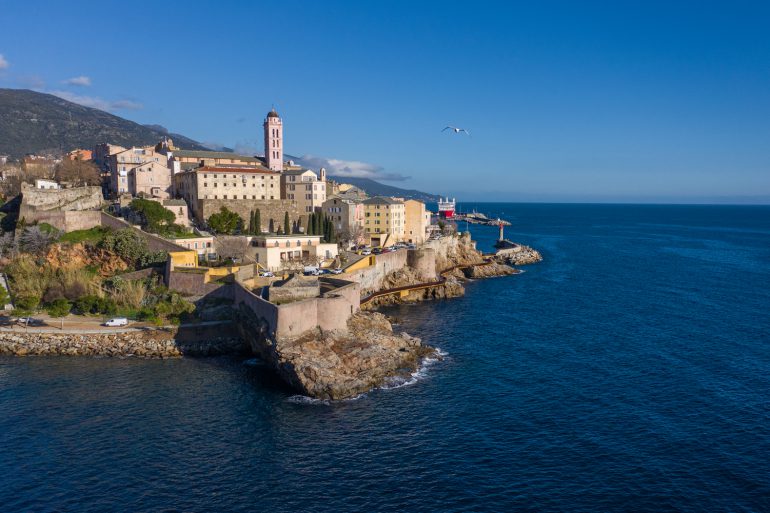 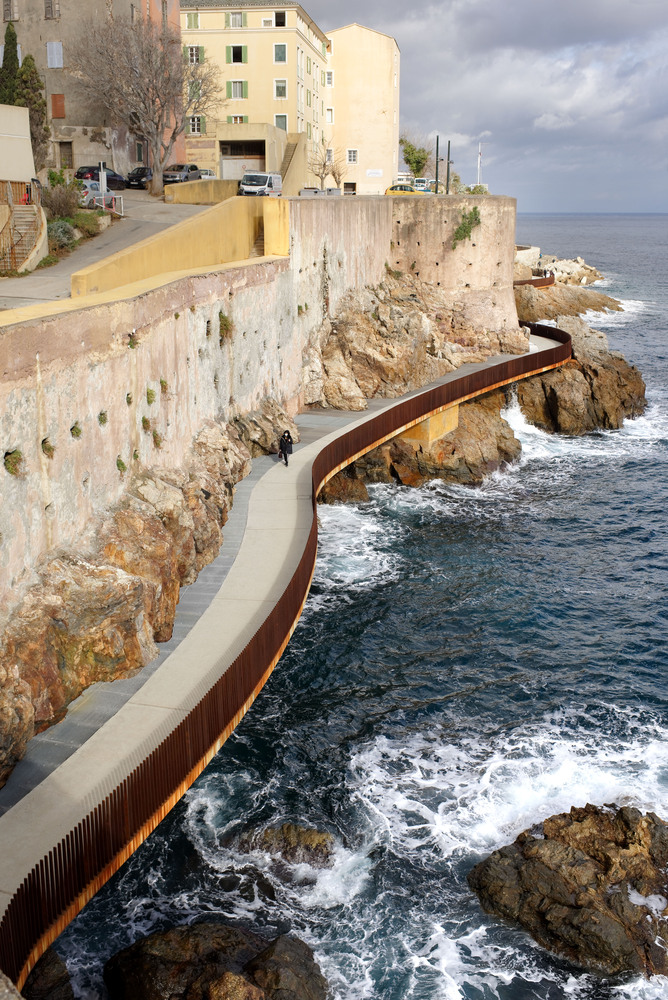 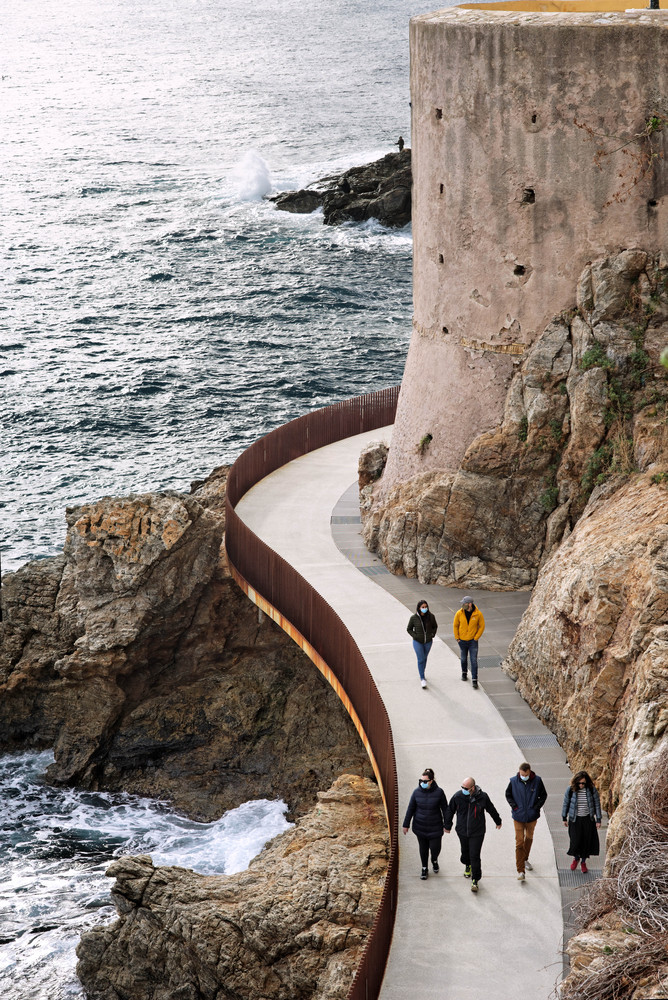 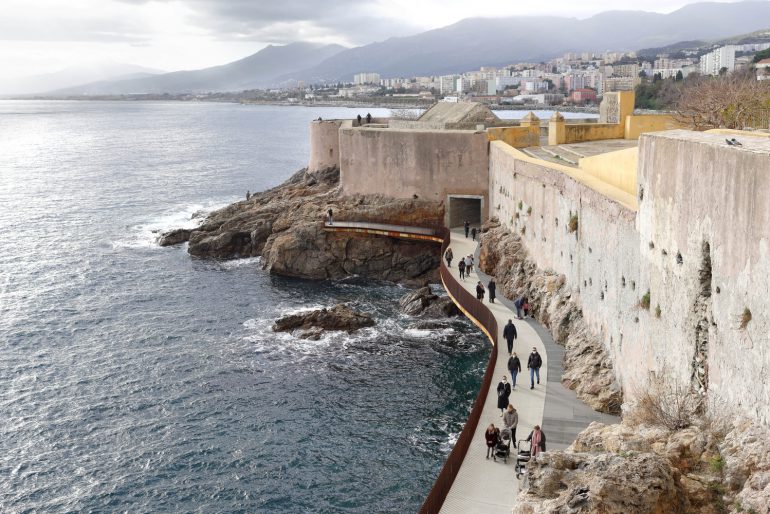 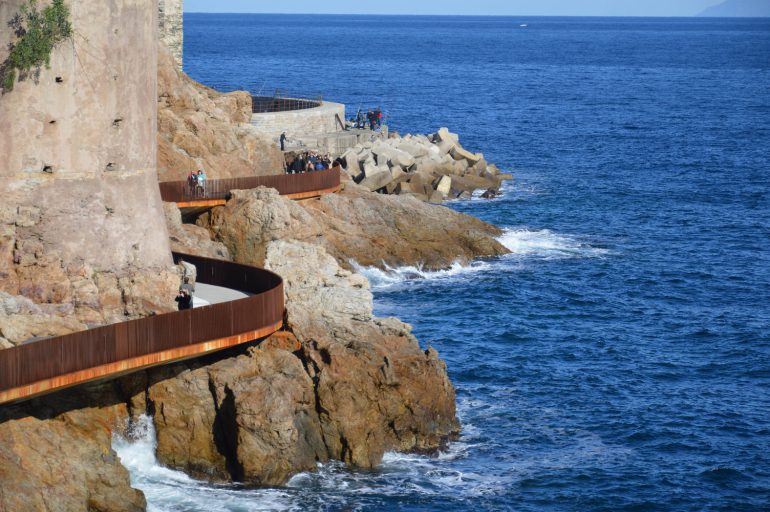 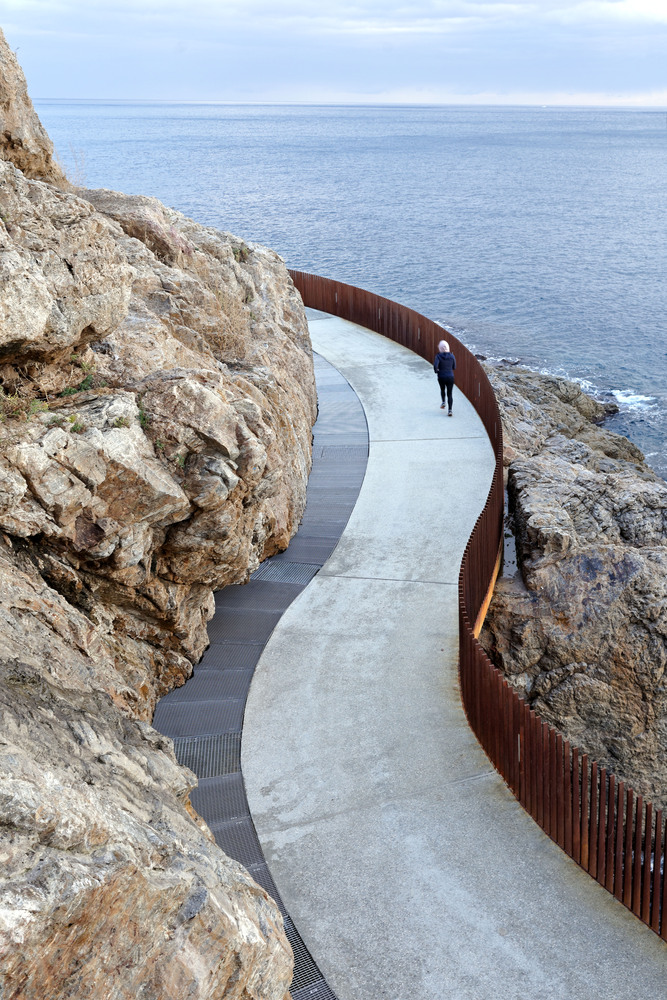 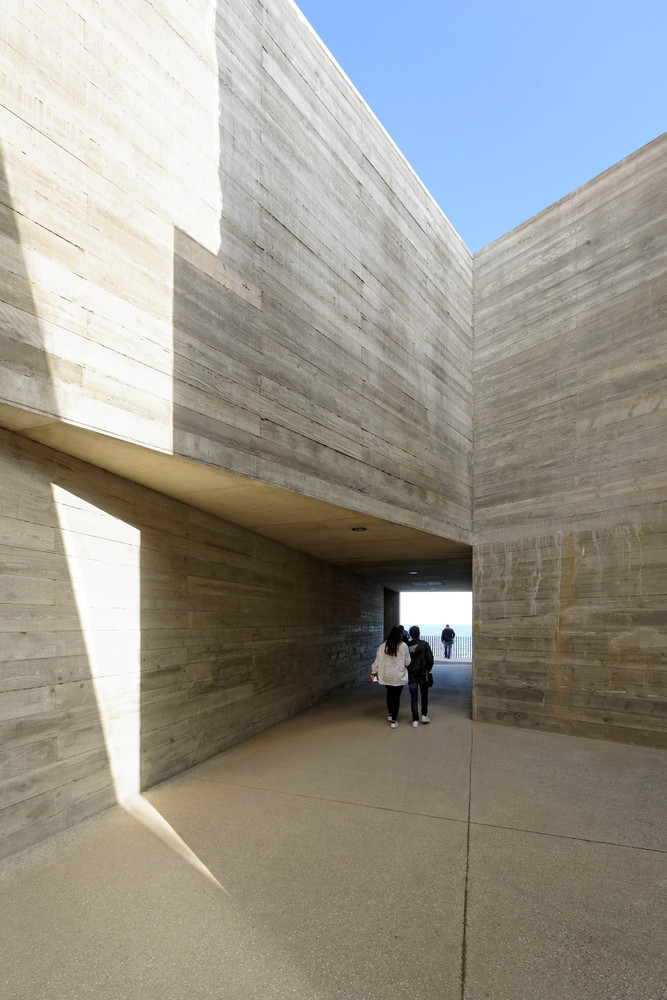 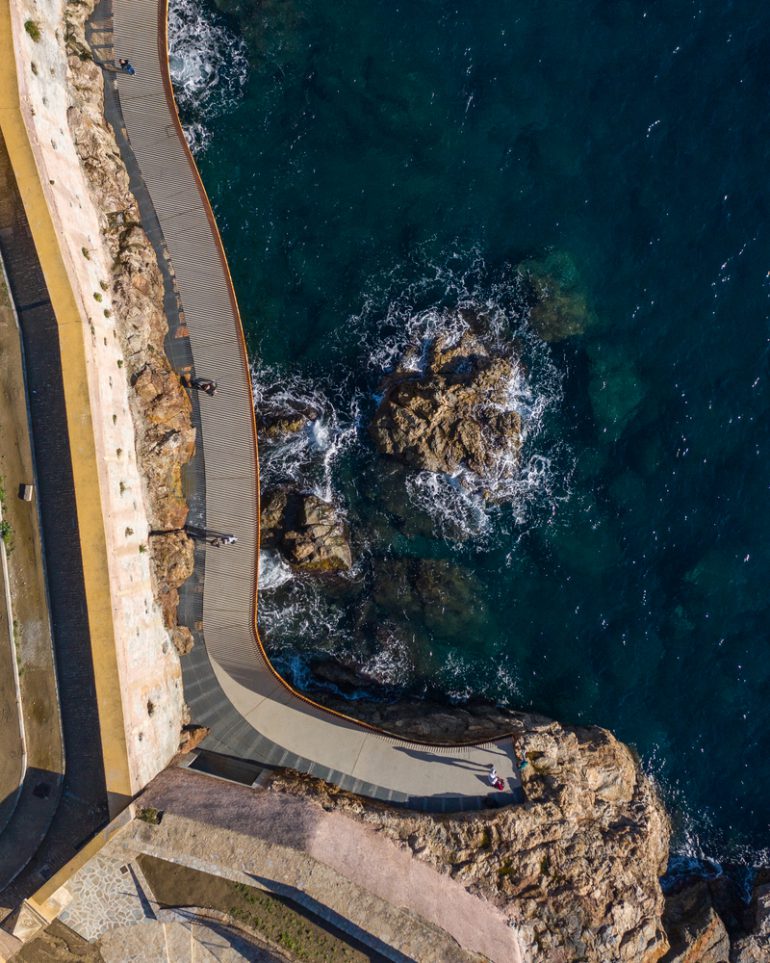