To provide the best possible service, we use cookies on this site. Continuing the navigation you consent to use them. Read more.
PROJECTS
·27 September 2019 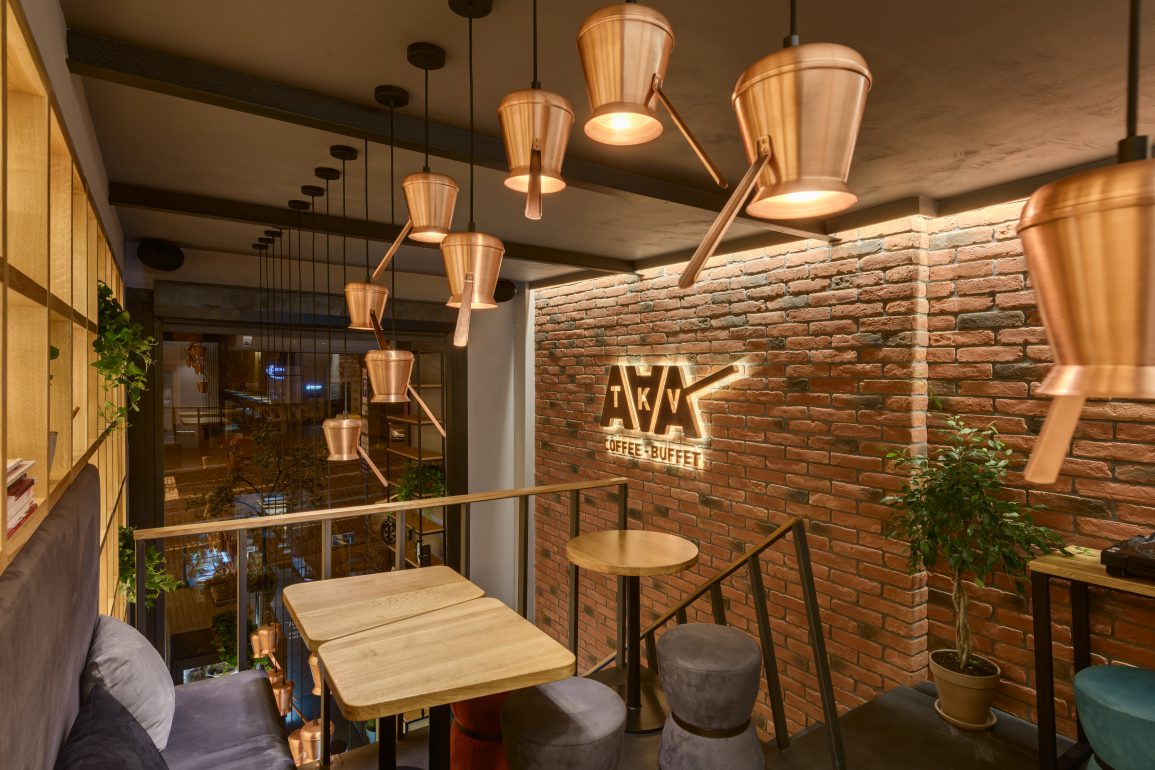 Takava coffee-buffet is an atmospheric coffee shop in the center of Kiev, the brand, the interior and exterior of which were created by designers Aleksandr and Vladimir Yudin.

Like any script or book, Takava declares itself already in the title. When you hear it, you think about the best coffee you seek in the morning, which will fix all thoughts and is so tasty and fragrant that you want to share with your friends or immerse yourself in it with your dreams.

The logo of the coffee shop was rounded in the shape of a Turkish cezve. Its sense of the same “proven place” and association with “Turkish” became the leading motifs in the interior of the studio Yudin Design.

Takava coffee-buffet design encounters velvet impressions, which reveal more and more a rich taste, along with the contemplation of individual details. So, the designers deliberately chose for the design of the cafè materials that create barely perceptible an aged effect: light wood and the same rustling plaster, red brick and burning copper. Scattered lighting complements this impression.

Fixtures in the form of jezve helped the designers to create a Lviv workshop PikArt Lights. Bulbs are hidden not only in copper vessels, but also in the niches around.
Such a capsule distribution of light helped Aleksandr and Vladimir Yudin to harmonize the daylight, coming from the two-story front window, with the interior. In the evening, the atmosphere of TAKAVA coffee-buffet becomes completely different, as daytime haze changes the lights of the night city. To create the effect of open heat, which prepares the Turkish coffee, designers have illuminated a logo that adorns the brick wall.

The soft textures in the interior are represented by velvet wall panels, which in the form resembled a jezve. The same shape can be found in the design of round puffs of different colors. Coffee, red and even turquoise shades inspire associations with an oriental coffee shop. Tables, like all other furniture, were designed by the studio YUDIN Product – so named Vladimir and Aleksandr their workshop which creates design furniture and accessories. Both sides of the coffee tables are slanted, which again reminds the jezve. Interested eye will see this symbol not only in the interior, but also in all the elements of the establishment of the institution that personalize TAKAVA as a brand.

In a friendly atmosphere that reminds people about the common preference, is created not only the aroma of coffee, but also organized a collection of vinyl and books in a high cabinet with niches. Thanks to a thoughtful planning, it’s also nice to sit and look at the rhythm of the city. Coffee makers and retro connoisseurs will especially appreciate the legendary Victoria Arduino machine installed in the cafè, that have been preparing coffee for over a century, starting in 1905.

Particular attention is also paid to the exterior of the institution. The glass front door is part of a solid glass faсade that affects not only the illumination at different times of the day, already taken into account by Aleksandr and Vladimir Yudin, but also the interior of the institution, because one side of it is like a constantly moving picture, which opens an extraordinary view of the city center. 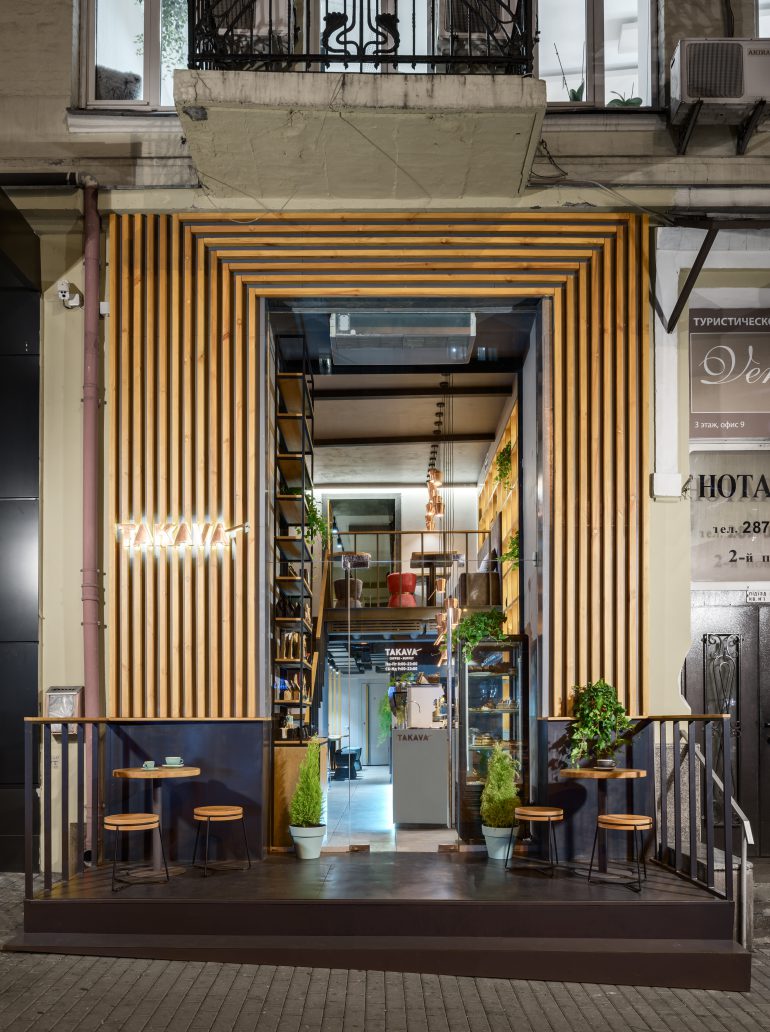 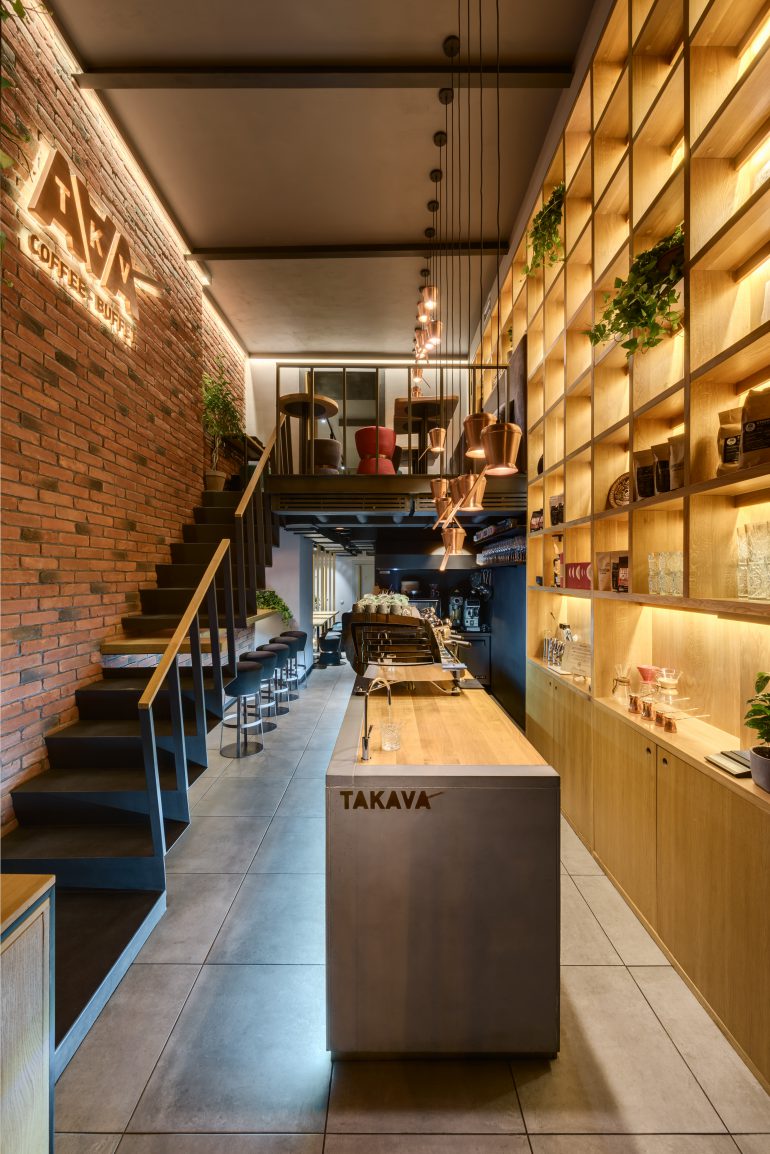 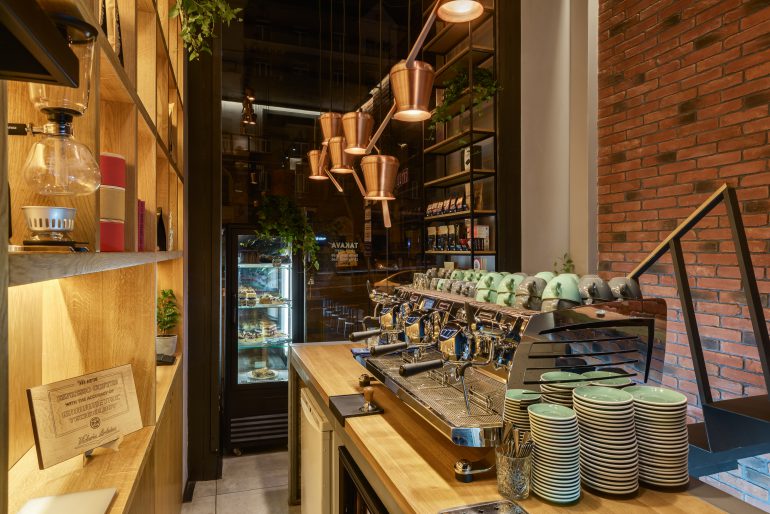 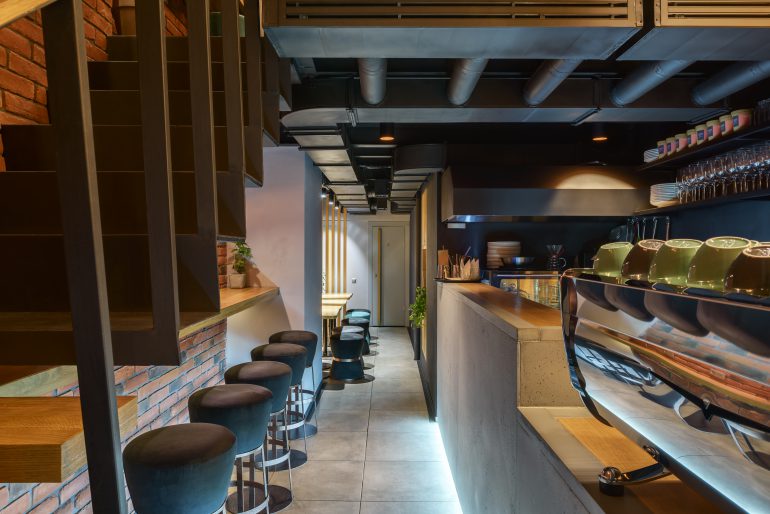 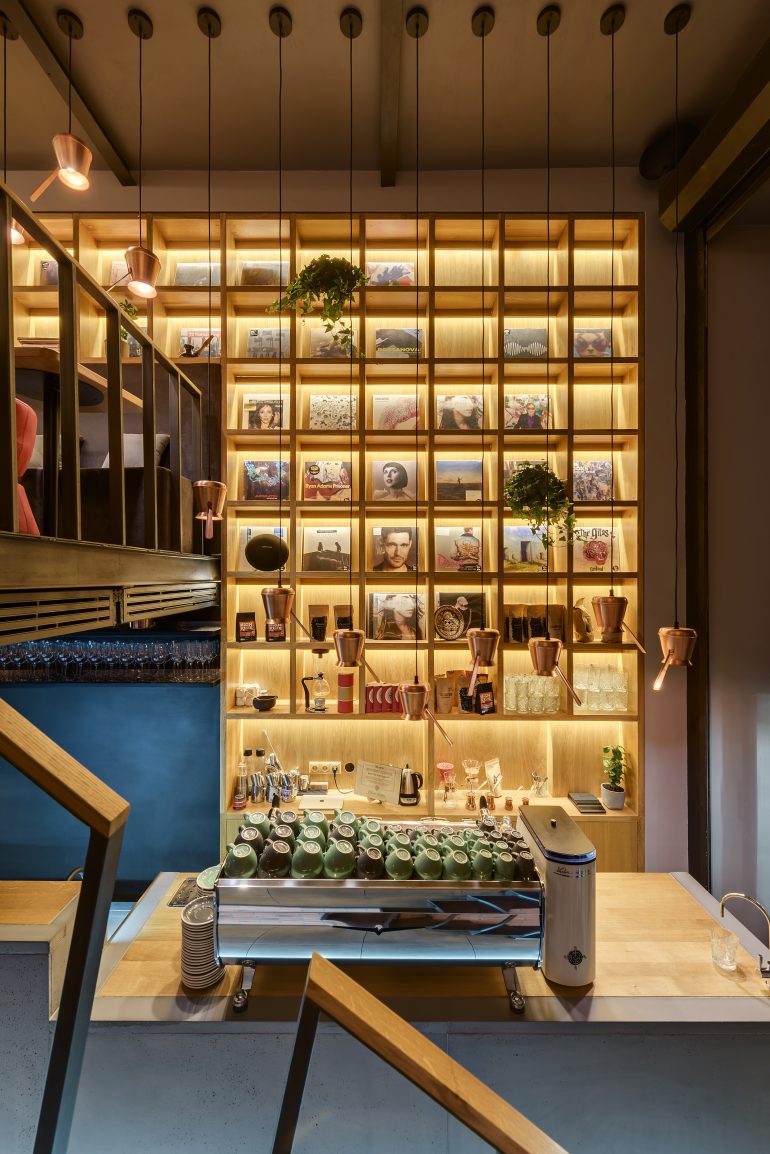 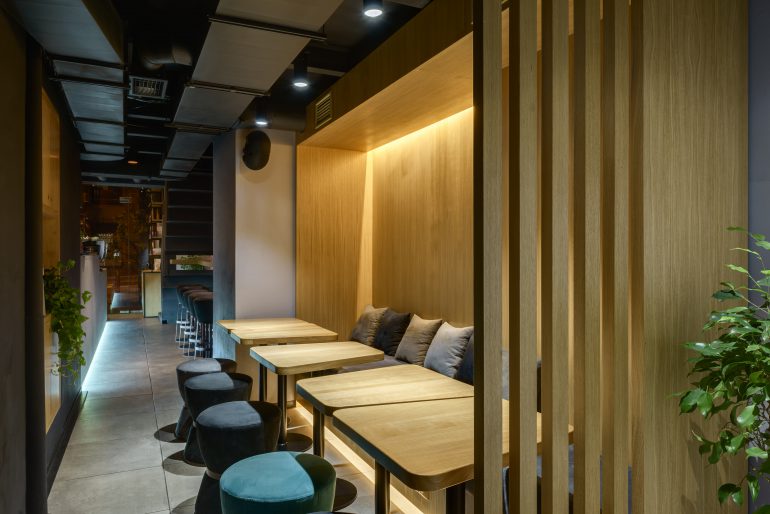 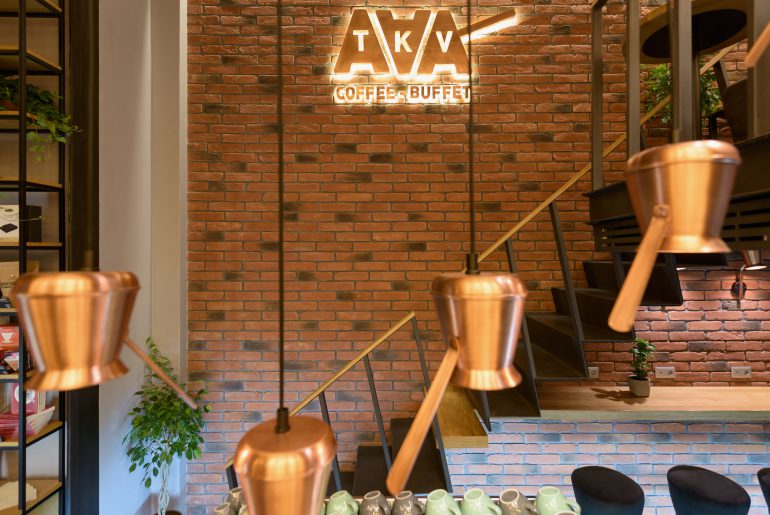 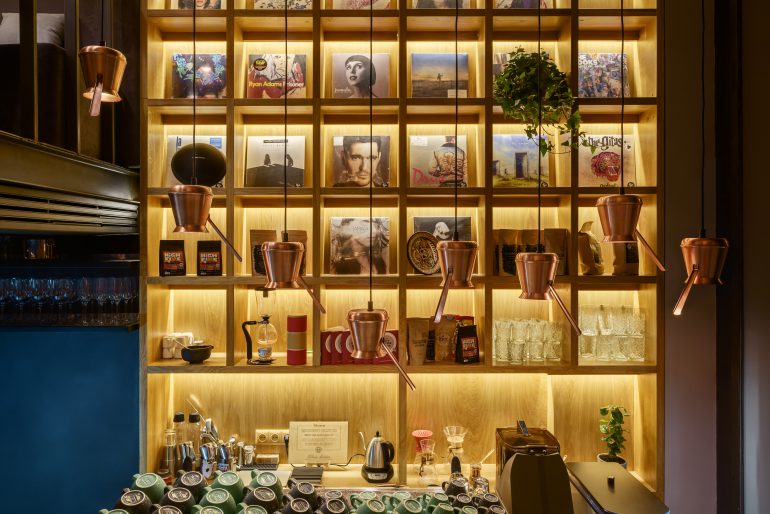 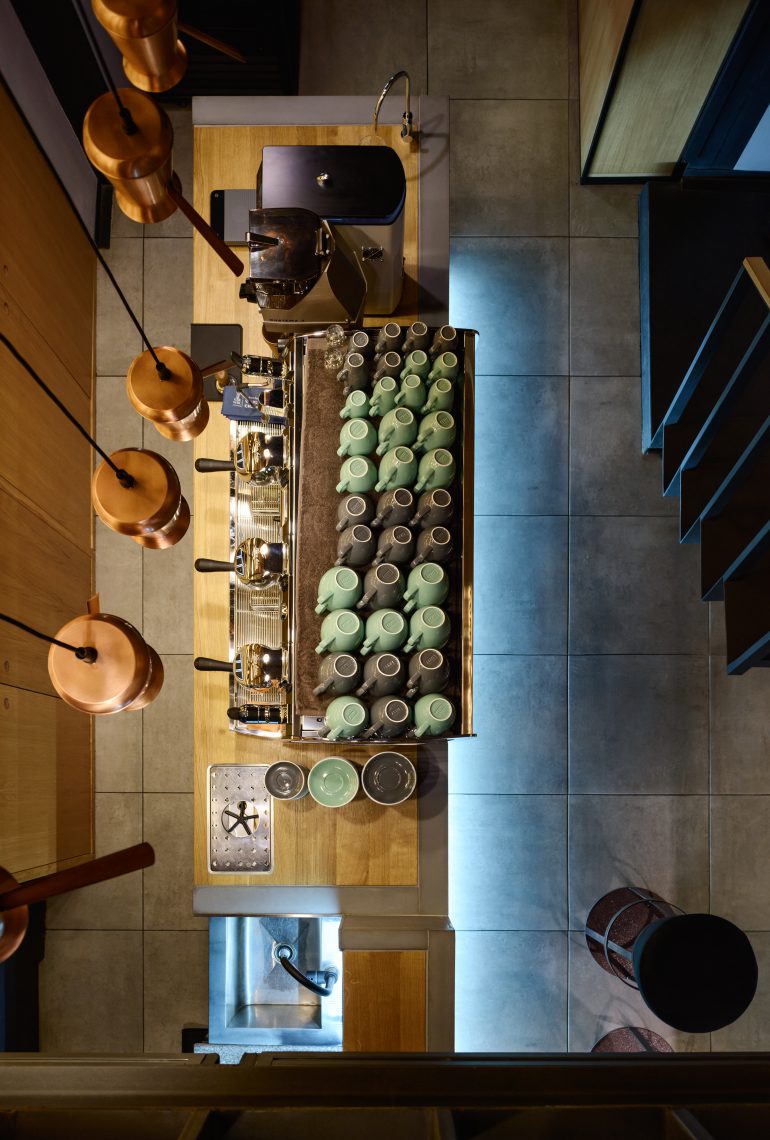 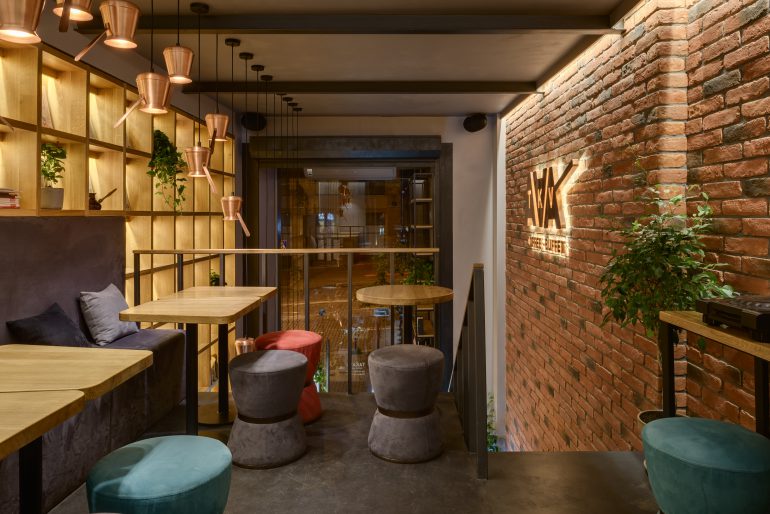 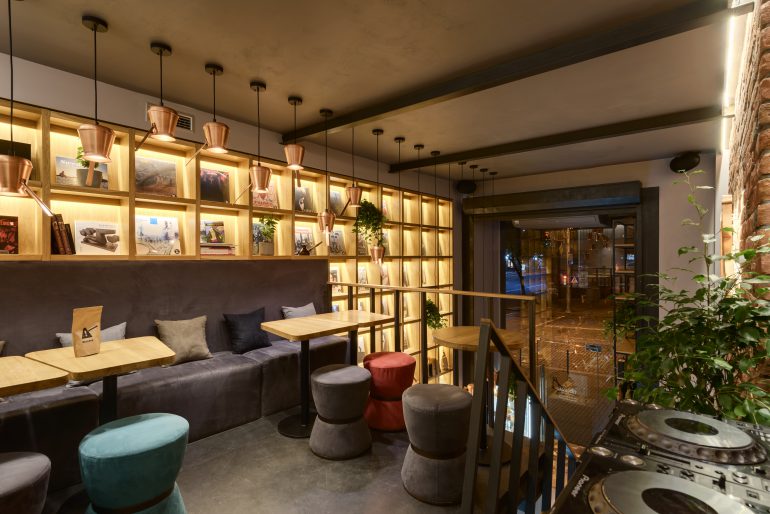 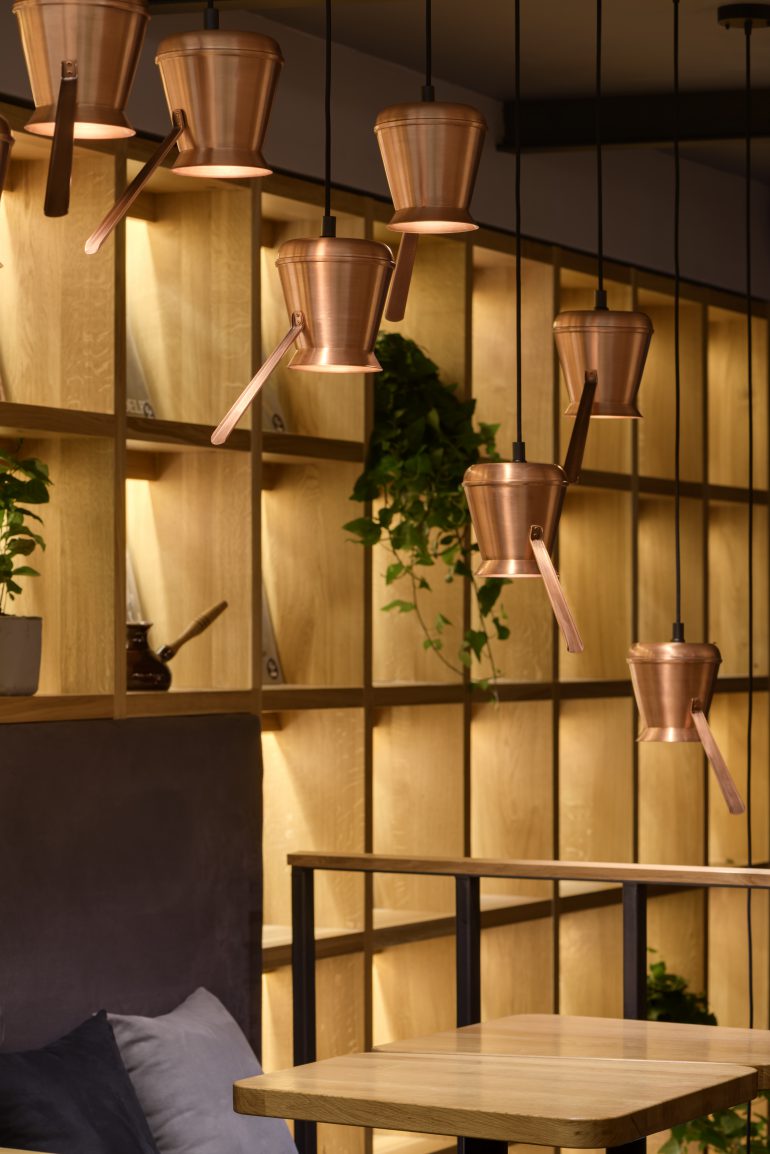