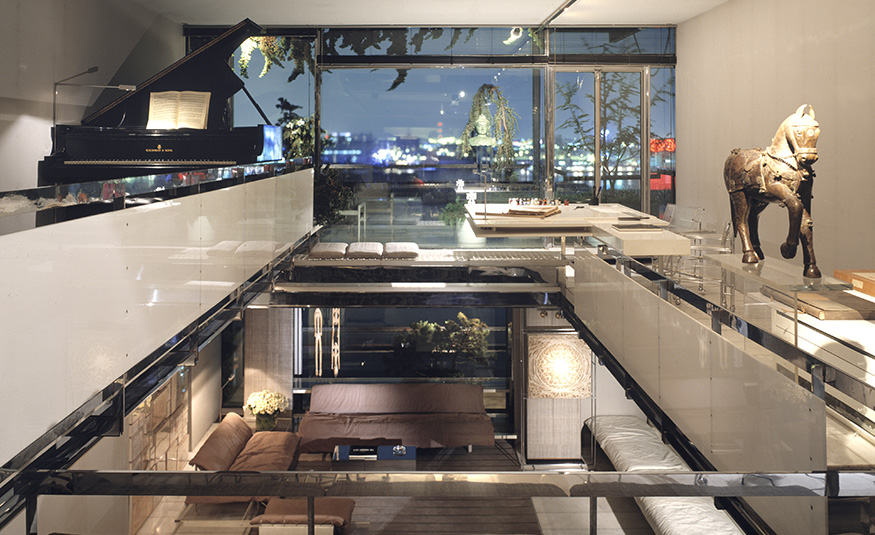 1977 marked the lowest point in New York’s urban crisis. Under cover of the disconcerting darkness caused by the blackout that hit the city on the nights of 13 and 14 July and driven by poverty and insecurity, hundreds of residents joined criminal gangs in acts of devastating random looting and more than a thousand fires destroyed entire neighbourhoods in the Bronx, Brooklyn and Queens. Just two years had passed since the famous Daily News front page headline featuring the phrase “Drop Dead!”, the harsh words with which, according to the press, President Ford refused to rescue the largest US metropolis from imminent bankruptcy.

Yet only in the previous decade, the city’s accounts were positive enough to consider an ambitious plan like that of the Lower Manhattan Expressway, the highly contested urban highway for which the Ford Foundation commissioned Paul Rudolph to provide a feasibility study. The latter, at the peak of his career as the powerful and respected head of Yale’s faculty of architecture, conceived a colossal mega-structure on several levels with a triangular format, a linear device incorporating infrastructures, services, residences and public space destined to plough through (and destroy, if it had ever been built) much of the SoHo and TriBeCa districts.

Towards the end of the 1970s, Rudolph experienced a crisis that was no less intense than that of the city where he lived and worked. A much-gossiped-about but never publicly acknowledged homosexual and the favourite candidate for the title of America’s most influential architect, he refused to temper his aesthetic principles and professional ethics in the ambiguous cauldron of ascending post-modernism and by now he had been relegated to the role of an outsider, an always authoritative but uncomfortable and marginalized voice.

So it was that in 1977, as his American clients diminished, he started building his own penthouse in the elegant Turtle Bay neighbourhood of Manhattan, just off the East River.
At that time, the city was ungovernable and prey to the sinister forces of the underworld that was infiltrating the island from the other boroughs via the inner suburbs of Harlem and Alphabet City. Rudolph’s house, cautiously “perched” on a mid-nineteenth century brownstone, is a palace of Sybaritic luxury which forgets the outside world on the one hand, and reproduces the complexity of its author’s urban visions on the other.

As with the Lower Manhattan Expressway, the design for the penthouse can really only be completely understood by looking at its individual sections. Only thus can one appreciate the articulation on four levels from different points of view, the truly monumental space of the full-height salon, the overlapping of the rooms open to the guests (to the south) and the night-time spaces (to the north) connected by a sequence of aerial walkways and the many overhanging terraces, of which the main one houses a secret hanging garden that is invisible from the road.

Rudolph built a labyrinth and to make it even more inaccessible he confused its geometries in a kaleidoscope of shiny, reflective, transparent surfaces. Steel and glass were the “industrial” materials glorified by modern architecture and whose orthodox use he learned during his studies with Walter Gropius at Harvard. In the penthouse, he frees them from the ideological value they had been saddled with and makes them the cornerstones in a masterful performance of spatial illusionism. The stairs are made of glass and do not have handrails, the shiny metal dematerializes the exposed beams while fragments of stained glass furtively reveal what is happening in the more private environments (even in the bathrooms!). Finally, the transparent bathtub bursts through the wall of the stately bathroom and hangs over the kitchen, revealing the nakedness of the unwise bather in a dizzying view from below.

The penthouse conforms neither to the traditional family image of the home, sweet home nor to the sophisticated elegance of case study modernist houses. Rather, this cavern-home is a stage without a backstage, a theatre with no backdrop or curtain where every visitor is the protagonist of a performance without intervals. The architect, his secret lover, his closest friends, institutional and casual guests: all of them are pawns in a sensual interplay that is ironic or very serious by turns and in which each continually oscillates between the role of voyeur and that of exhibitionist.