To provide the best possible service, we use cookies on this site. Continuing the navigation you consent to use them. Read more.
PROJECTS
·11 November 2019 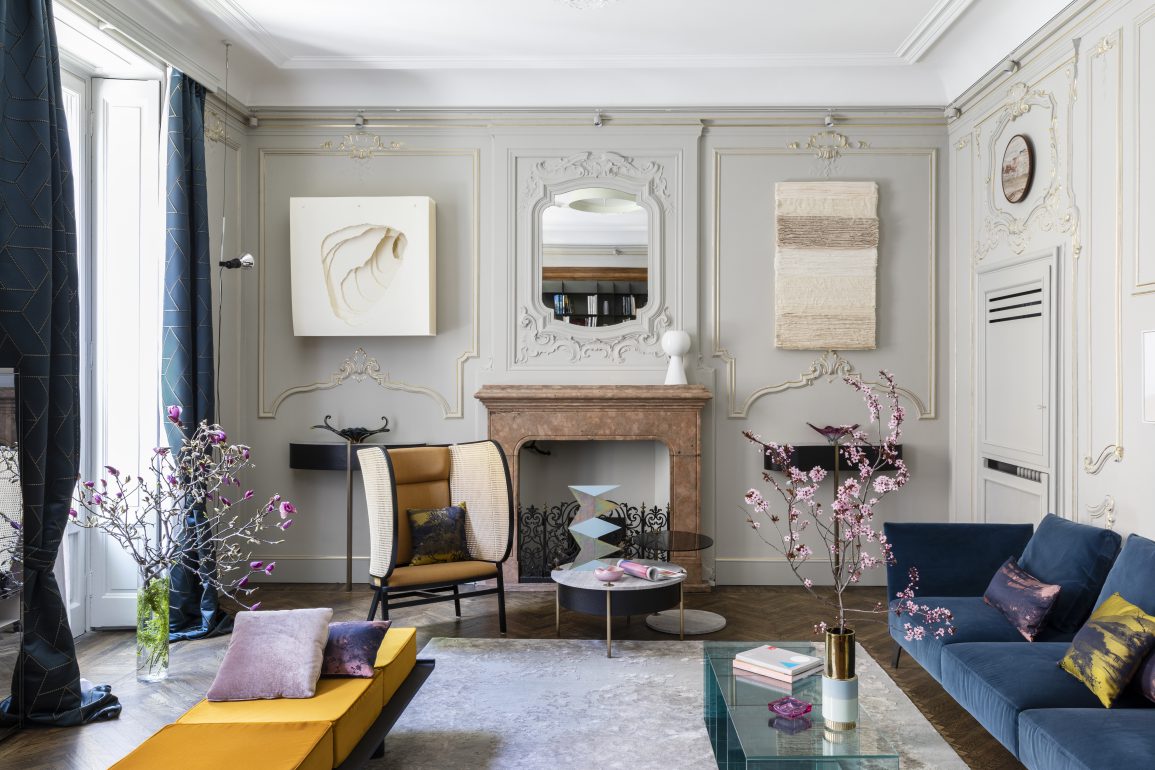 Can a project arise around the suggestion of a material? In this case this is what happened.

“During an event at the furniture fair, I was very impressed by the shades of grey untravertine from Iran. I immediately thought it was wonderful, because it combined the beauty of the stone, with its characteristic veins and the colour of the concrete. When I saw the empty spaces of the apartment in Via Ruffini, previously used as offices, I immediately thought of that marble to be used as the main element to cover the entire portion of the house that needed a complete renovation, as it had no walls, with a part dedicated to the toilets of the offices, therefore totally incompatible with the new destination of private home.”
The residence in which the architect Alessia Garibaldi decided to live, is located in a noble palace of the early twentieth century in Milan, a stone’s throw from Leonardo’s Last Supper in Piazza Santa Maria delle Grazie. The apartment of about 200 square meters has been divided into two separate units, respectively of 70 square meters and 130 square meters.
The latter was characterized by high ceilings and simple spaces, without internal partitions, except for an important hall with antechamber, characterized by the historical pre-existence of stucco on the walls, walnut frames, two showcases passing between the two rooms and a central fireplace in red marble. The historic part has been completely restored and enhanced, the old oak parquet has been patinated with a darker color, the walls painted in light gray for the living area and a darker color “mud” in the dining room. The old plaster frames were highlighted with handmade, well-calibrated gilding. In the dining room, the ultra-slim bookcase in dark bakelite designed by the architect contains two large mirrors that trace the previous pre-existence of the two doors that connected the old apartments.
The mirrors play a scenic role, widening and giving depth to the space as if the room ideally continued in the apartment behind. Two small black wooden consoles with marble tops, illuminated by the Foglio di Tobia Scarpa, have been attached to them, all reflected in an interesting perspective game. The rooms are dominated by symmetries starting from the large wooden frame that divides the dining room from the living room. The calendered glass cabinets pass through the two rooms and the furniture designed and manufactured specifically for these spaces play with and enhance the elegant atmosphere that you breathe, giving a feeling of consistency and temporal continuity, as if everything has always existed.
The contemporary part is immediately anticipated in the entrance hall, where an “open kitchen” unexpectedly welcomes the visitor. Travertine becomes the protagonist: a passing parallelepiped conceived as a sculpture, suspended and divided between the two environments by an extra clear glass wall. The cement on the walls blends with the flooring to create very intimate and familiar environments, with shades of colour ranging from grey to dove grey, illuminated by technical lights and suspended crystal bubbles. The room literally revolves around the back wall, completely covered in travertine left in its natural state, rich in the typical cracks of this material, which becomes a sculptural element.
The wall detached from the ceiling and floor plays on lightness. Thanks to the use of extra-clear glass on the final part, separated by bronze plates, the whole results in a light view, allowing you to appreciate the richness of the materials used. The travertine wall also creates an open area in which the walk-in closet has been obtained on the left and on the right the bathroom behind, the latter characterized by a large shower in travertine polished box.
The furniture designed by the architect in dark oak has rounded shapes and the brass literally passes through the volumes playing on the balance between the almost suspended masses, accompanied by the veins of the woods and marbles that run matching each other. From the photographs of Hans op de Beeck, Erwin Olaf, Gabriele Basilico, Claudio Gobbi and Nobuyoshi Araki we move on to the works of Mario Schifano, Angela Glajcar, Paolo Gonzato, Joël Andrianomearisoa, up to the explosion of colour of the tapestry by the African artist Abdoulaye Konaté.
The careful and technical lighting, designed together with Flos, allows you to appreciate the individual characteristics. 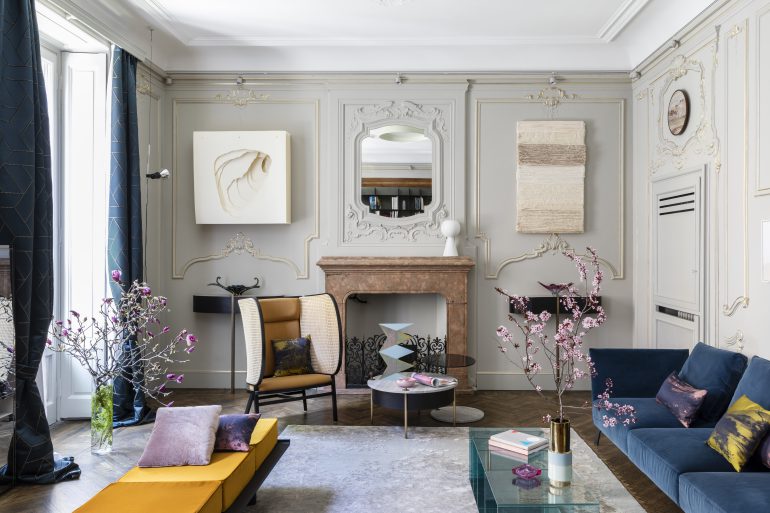 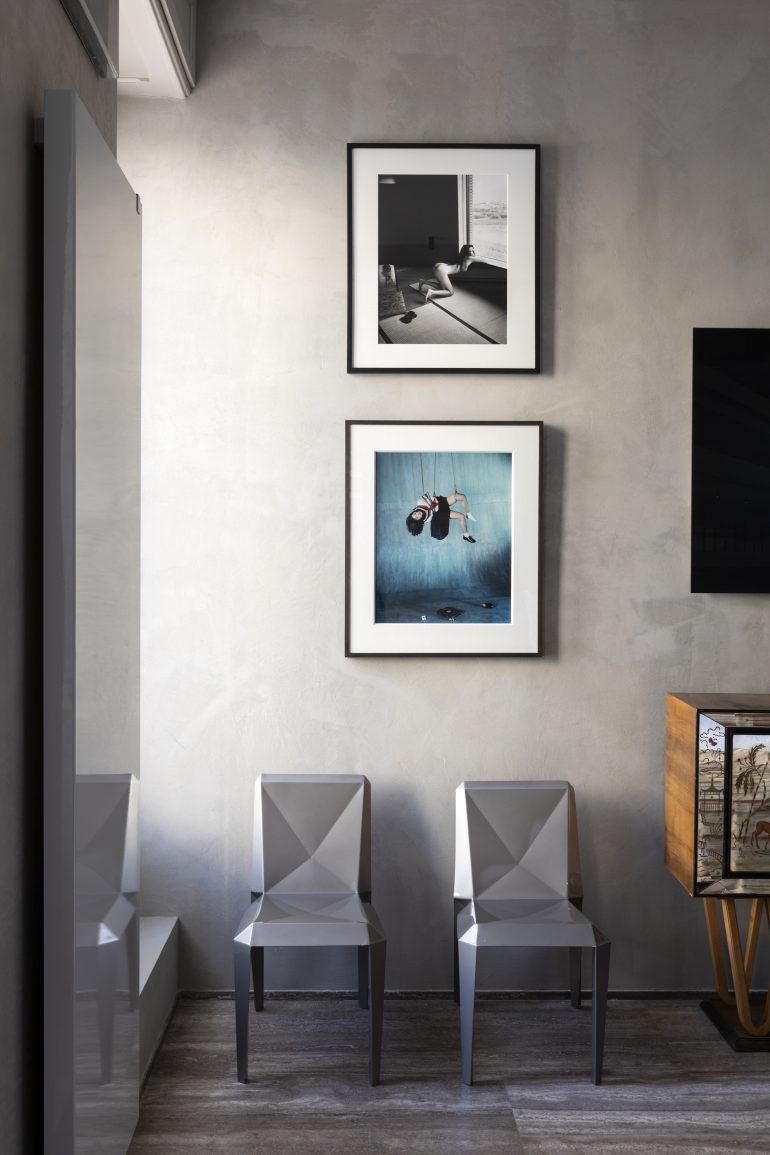 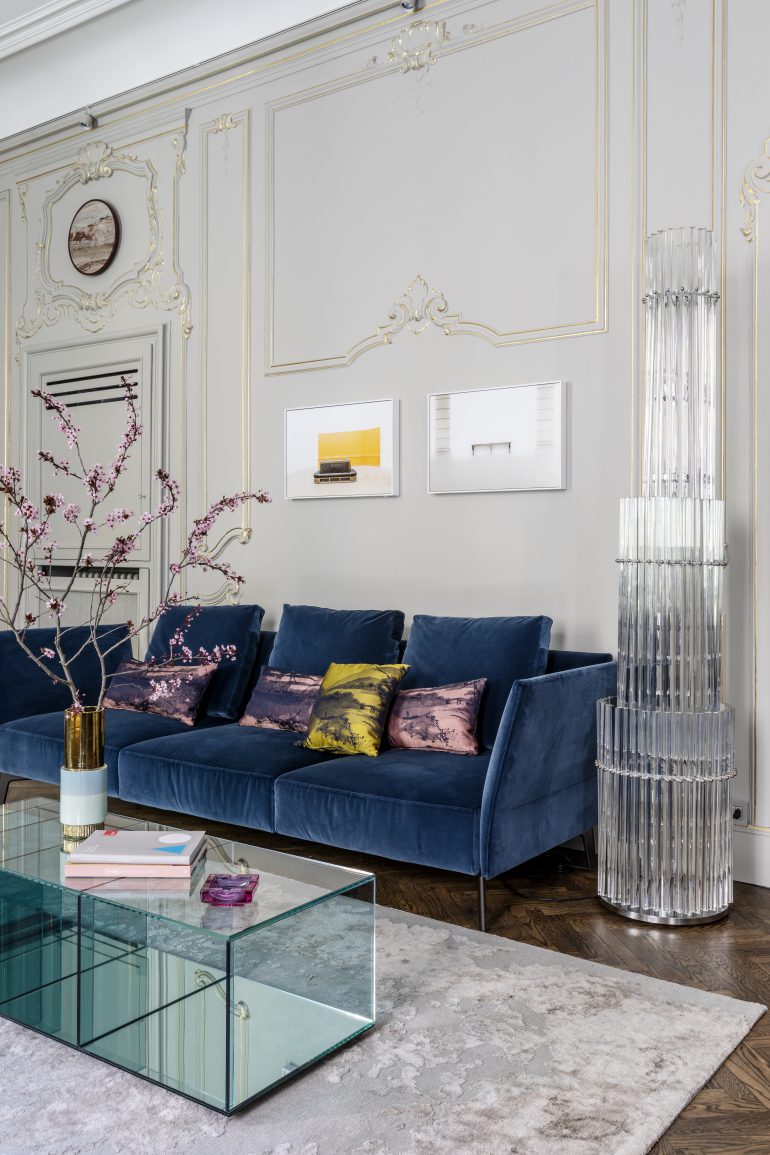 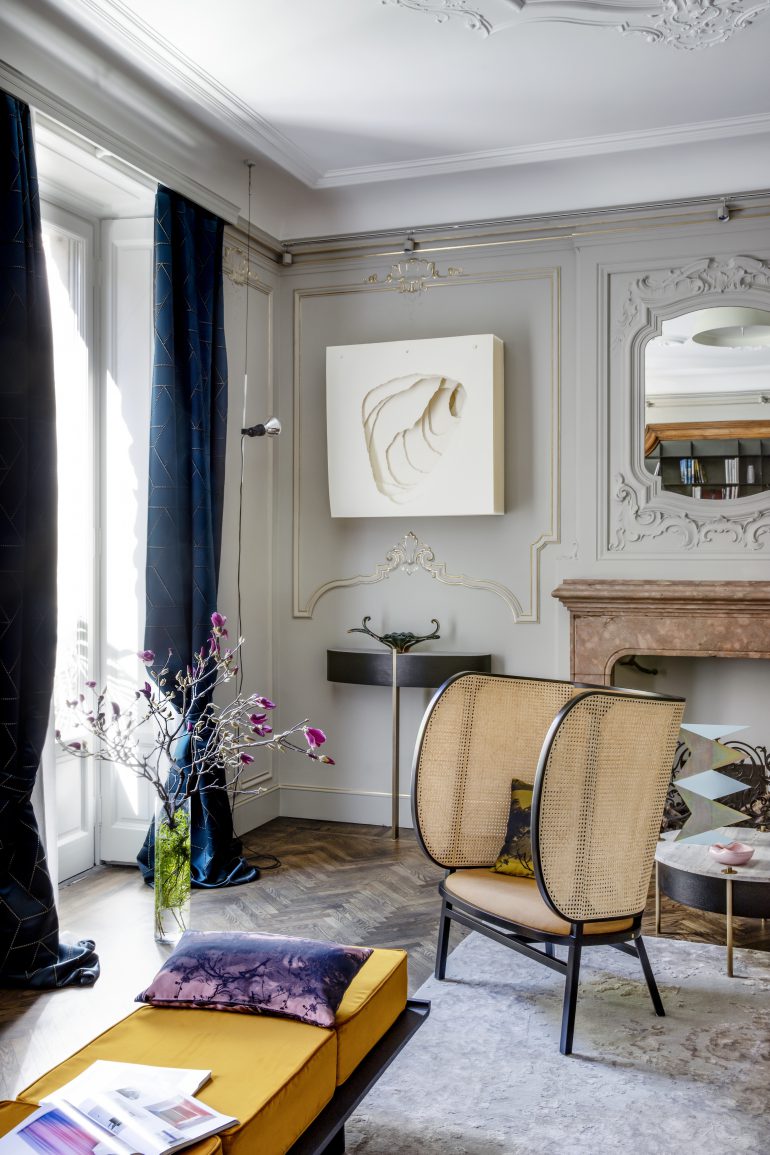 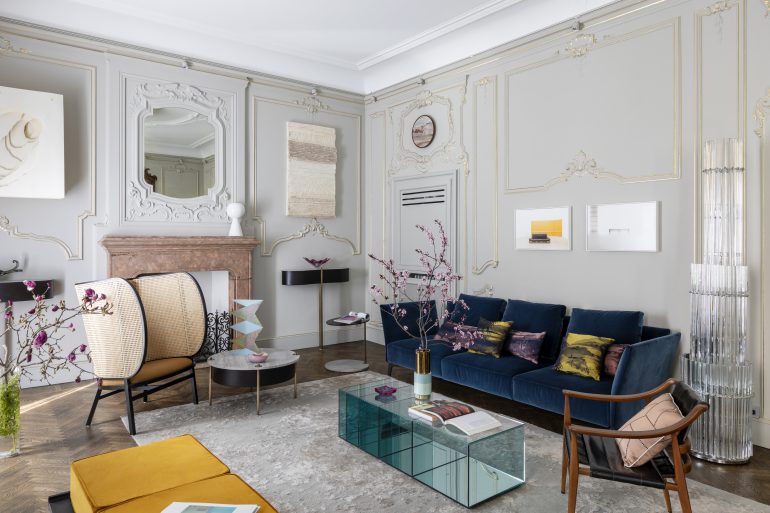 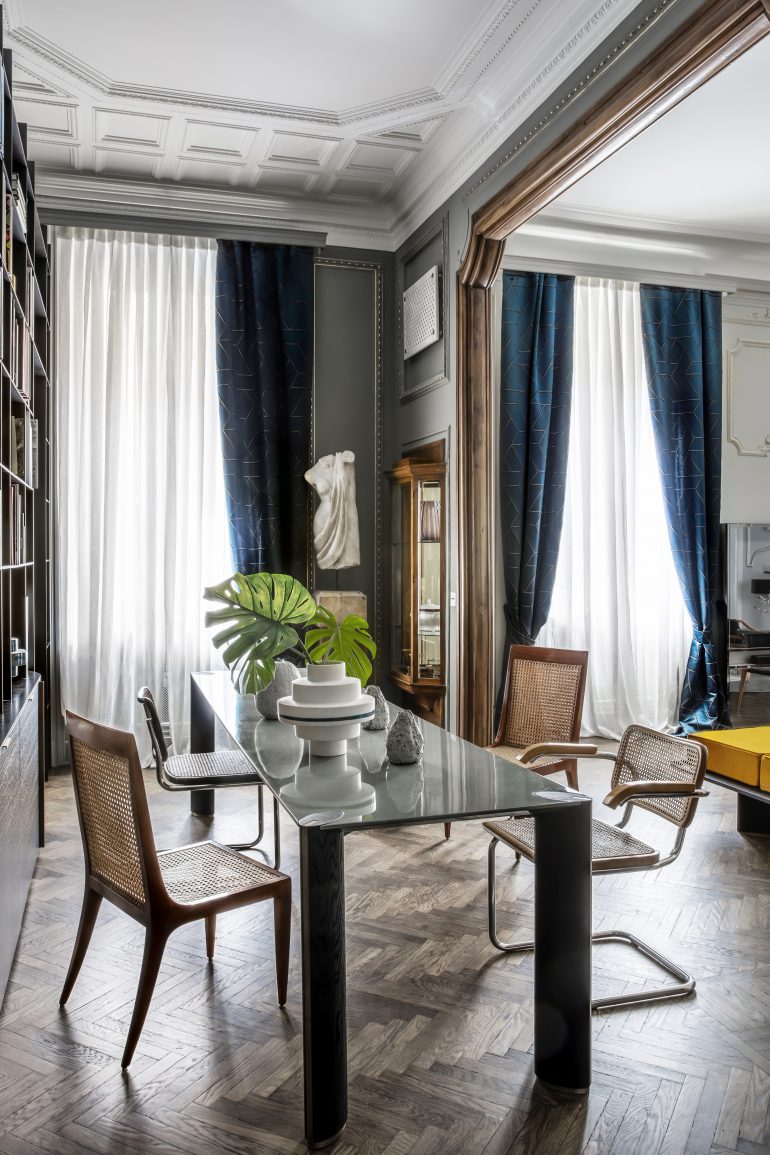 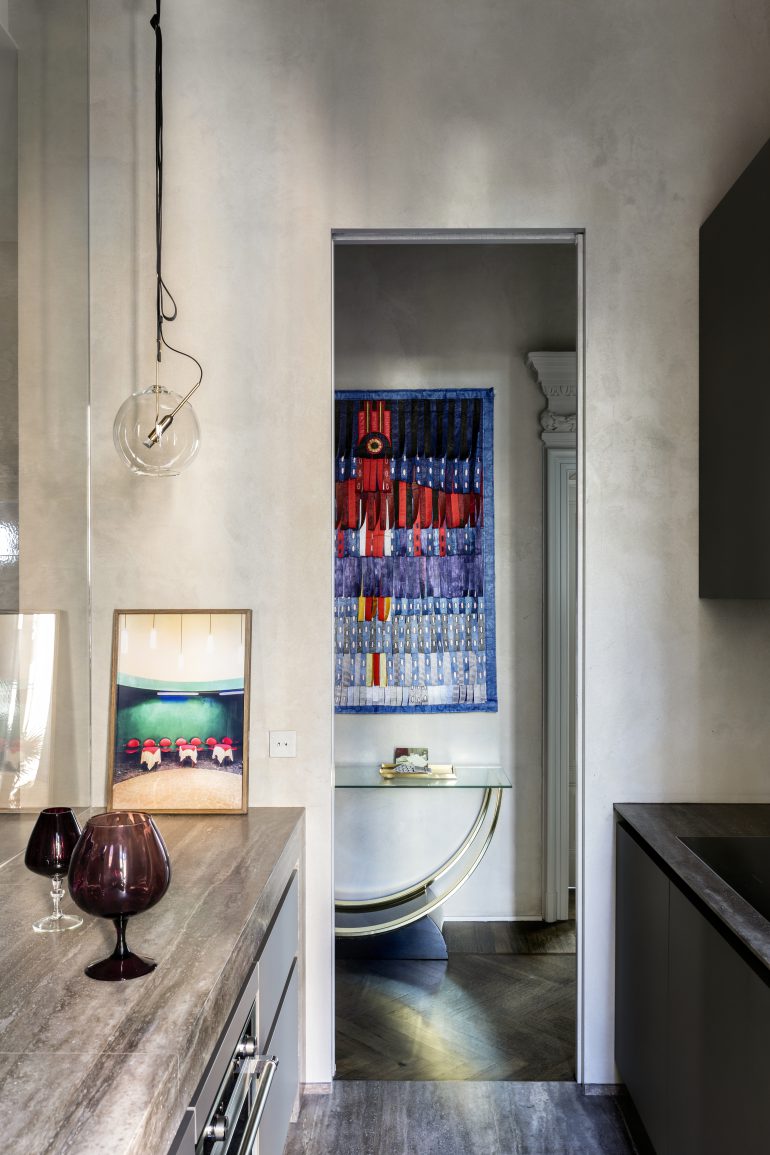 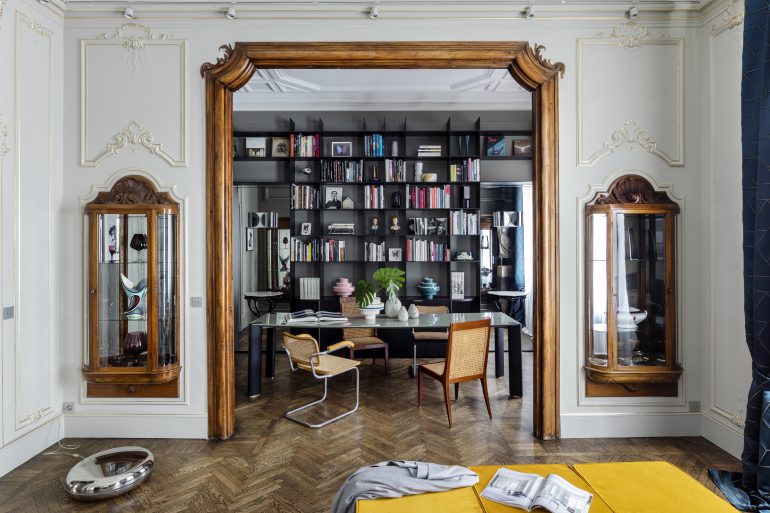 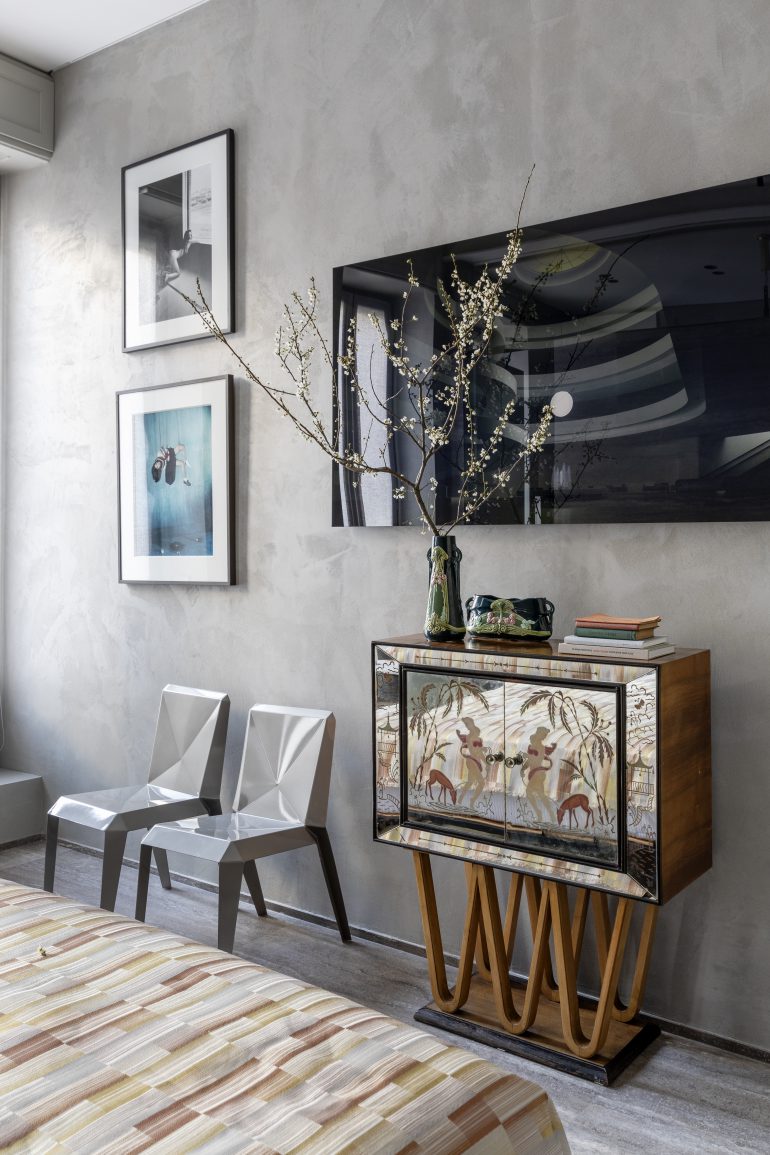 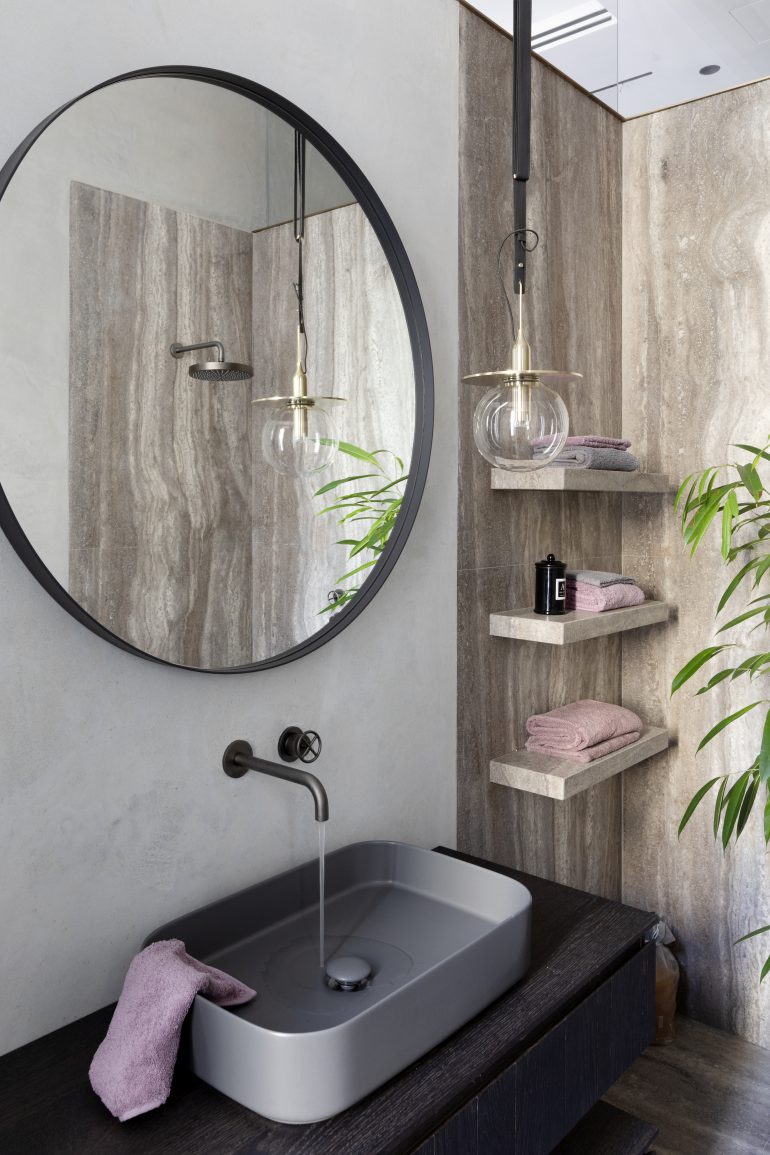 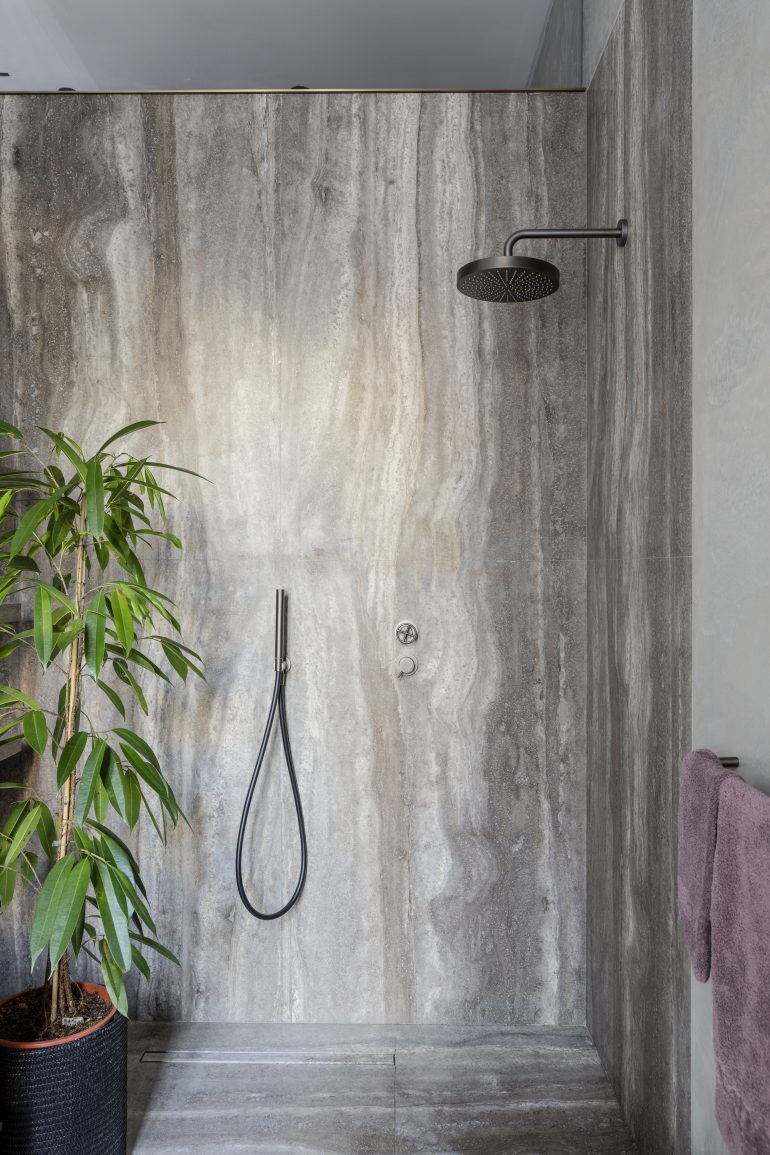