To provide the best possible service, we use cookies on this site. Continuing the navigation you consent to use them. Read more.
PROJECTS
·4 April 2019

The Caffè Fernanda is part of a larger project to redesign the Pinacoteca di Brera and its collection. It is named after Fernanda Wittgens, the gallery’s visionary director, who was responsible for its reopening in 1950, after the terrible bombings of ’43.

Located in the former main entrance, the café is conceived as part and parcel of the museum tour. More precisely, it echoes the new curation of the museum’s 38 rooms by director James Bradburne, carried out over the past 3 years. Hence, the project’s chromatic and material coherence with the gallery’s new layout, and its reinterpretation of the space’s 1950s architecture. The intense petrol blue of the walls chimes with the warm hues of the gallery rooms and sets off the artworks exhibited in the Café: Pietro Damini’s St. Bernard Converting the Duke of Aquitania, Bertel Thorvaldsen’s The Three Graces, the bust of Fernanda Wittgens by Marino Marini and her portrait by Attilio Rossi.

Adjustable LED projectors, mounted on rails that mimic the pattern of the pre-existent plaster beams, are the sole source of light, as befits the environment and the works.

The same brass, thinned even further, frames the large mirror, in which not only the bar’s bottles, but fragments of Thordvalsen’s Cupid and the Three Graces are reflected. The tables, too, are made of brass and walnut. A certain material coherence guarantees the space its harmony, allowing for an unencumbered appreciation of the works.

Lounging in the antique-pink and brass armchairs, one can admire Marini’s bust, whilst the tables by the bar offer a privileged view of both Attilio Rossi’s portrait and Francesco Hayez’s famous Kiss, located in the final room of the gallery. 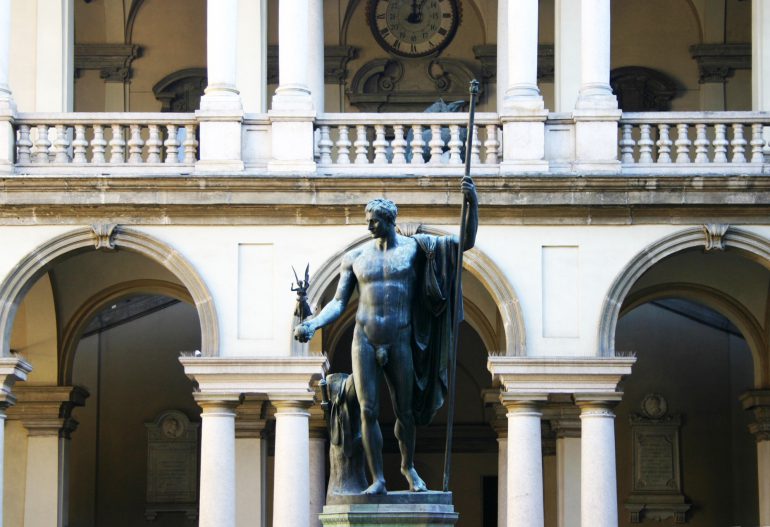 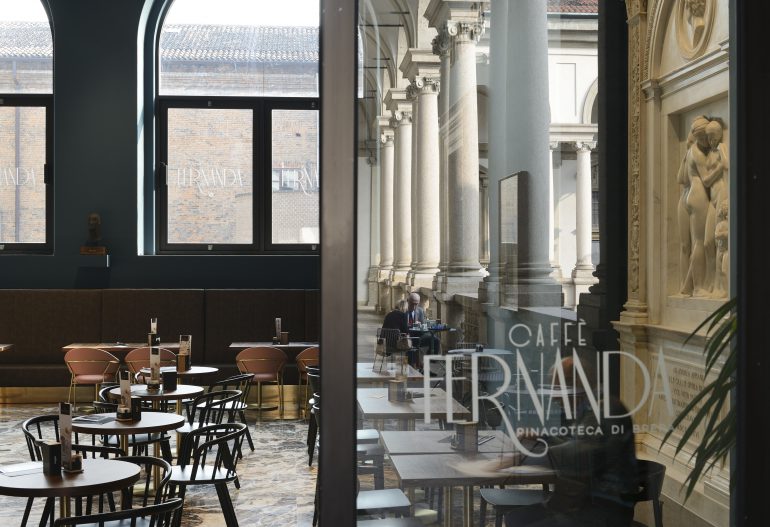 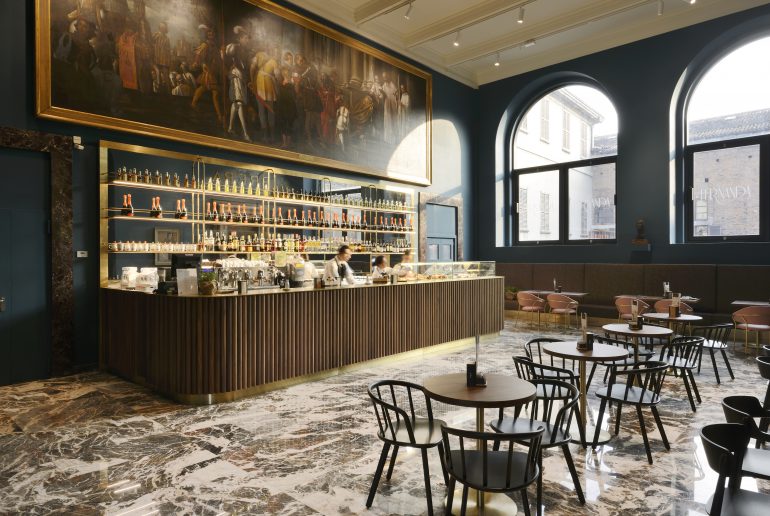 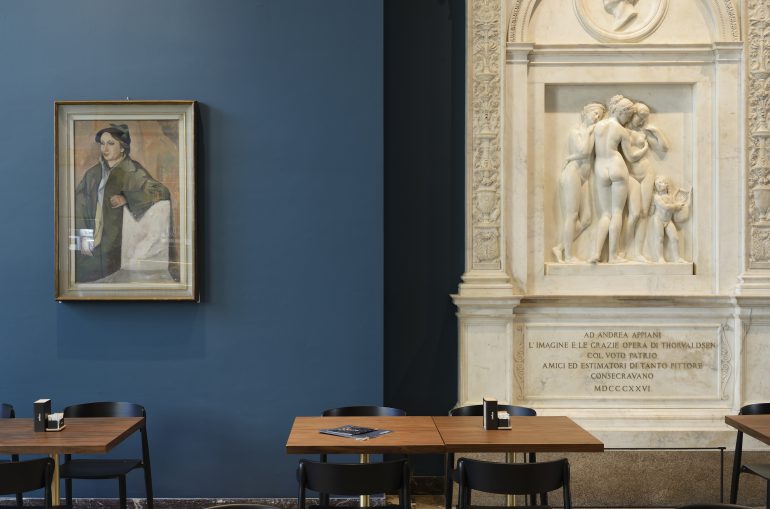 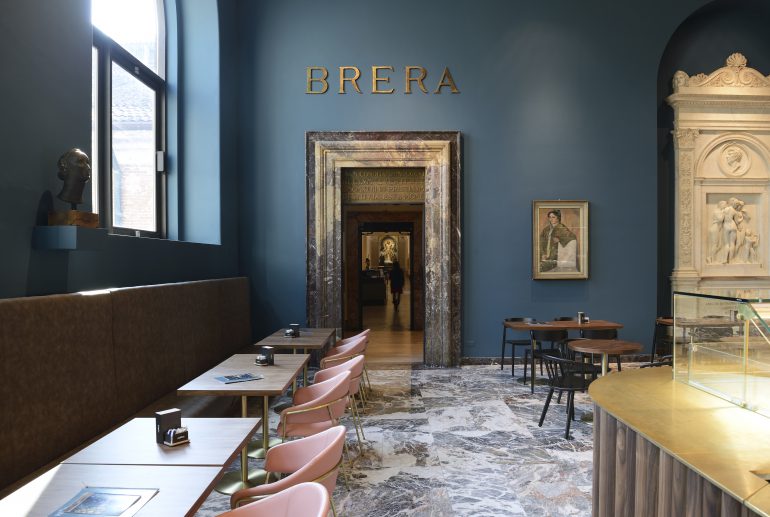 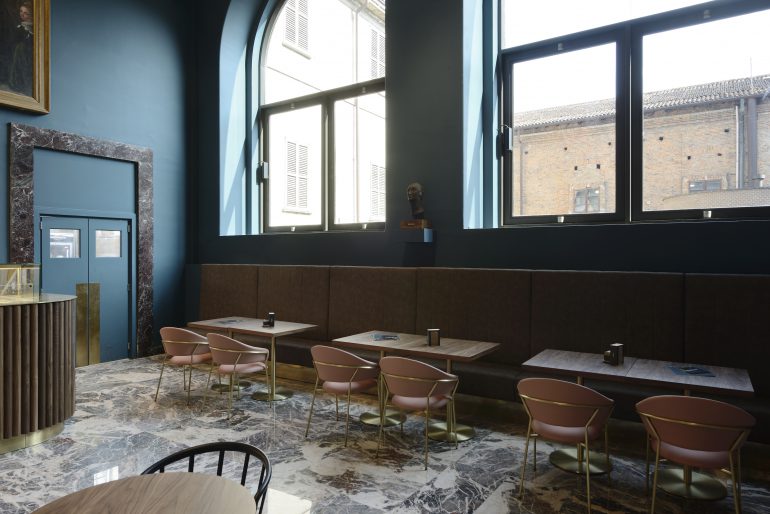 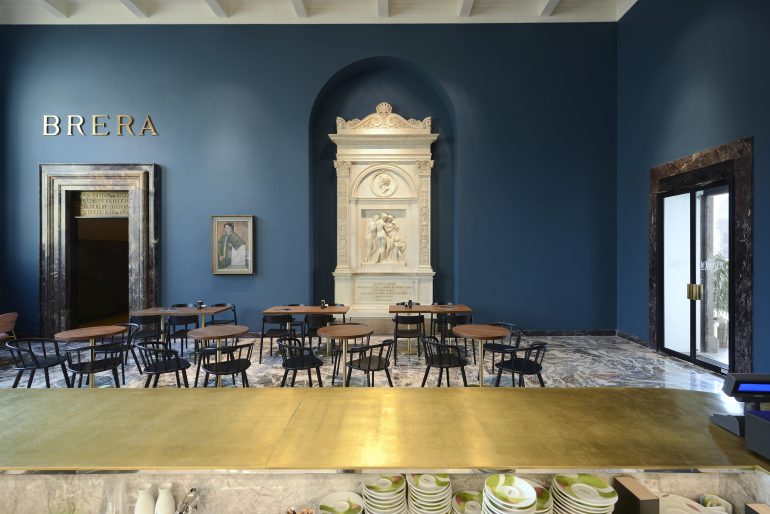 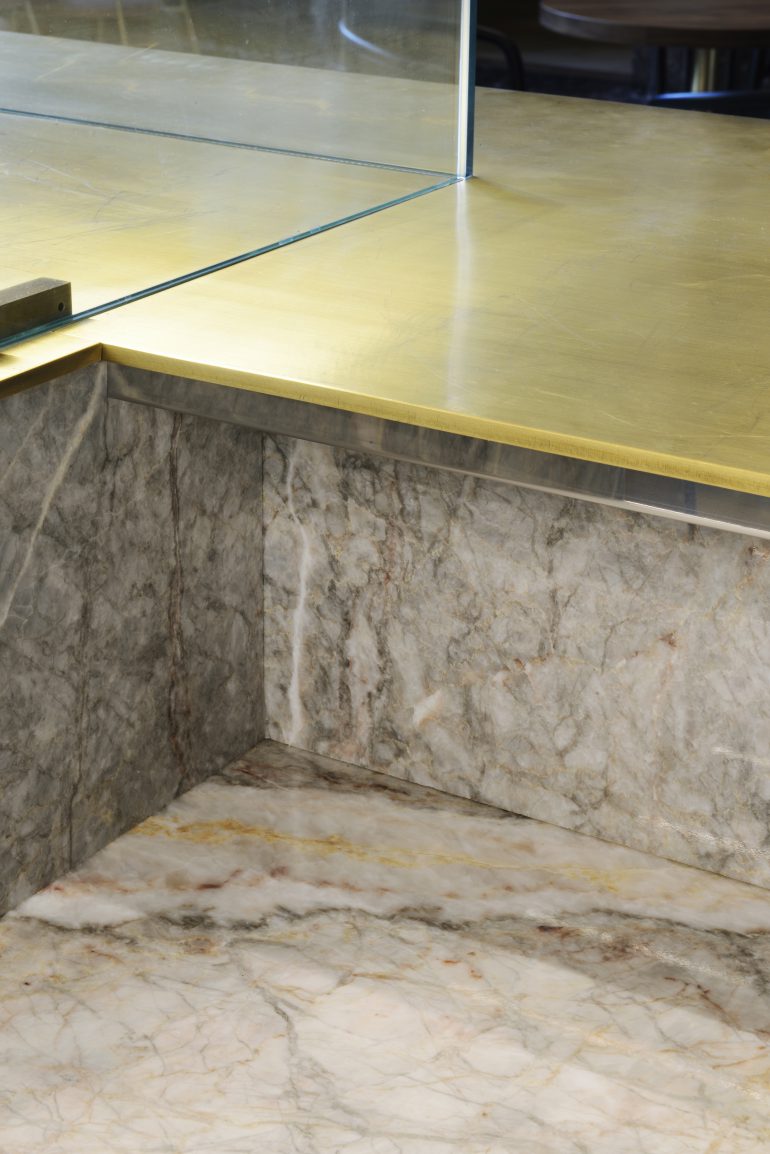 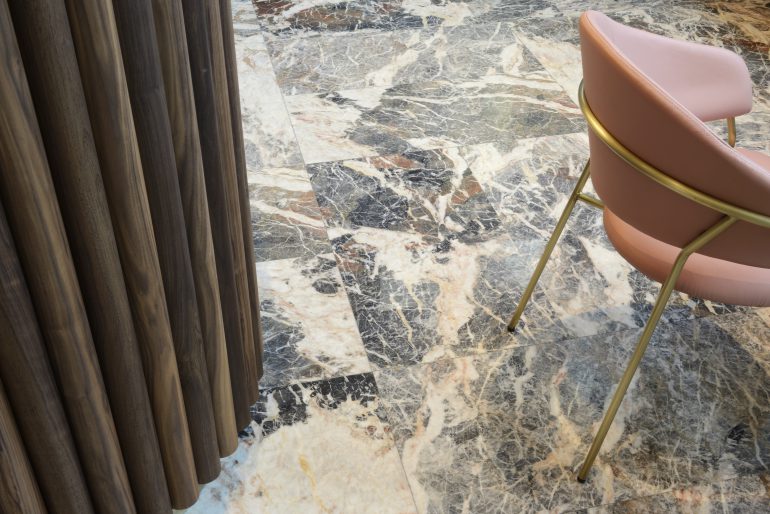 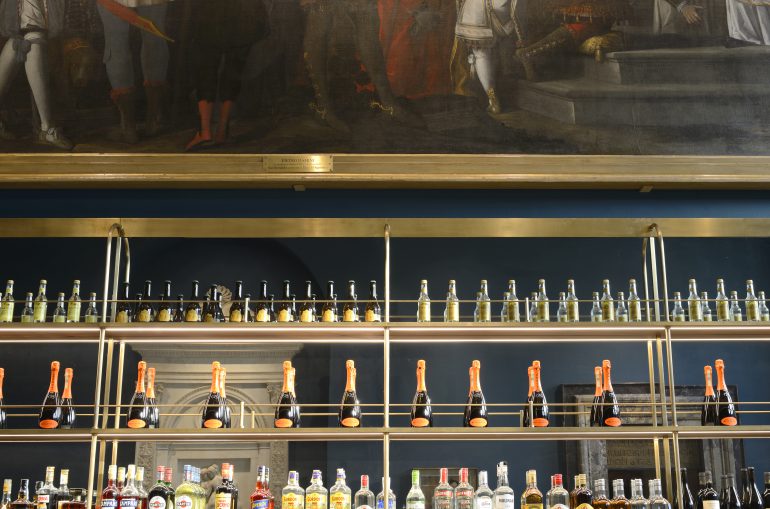 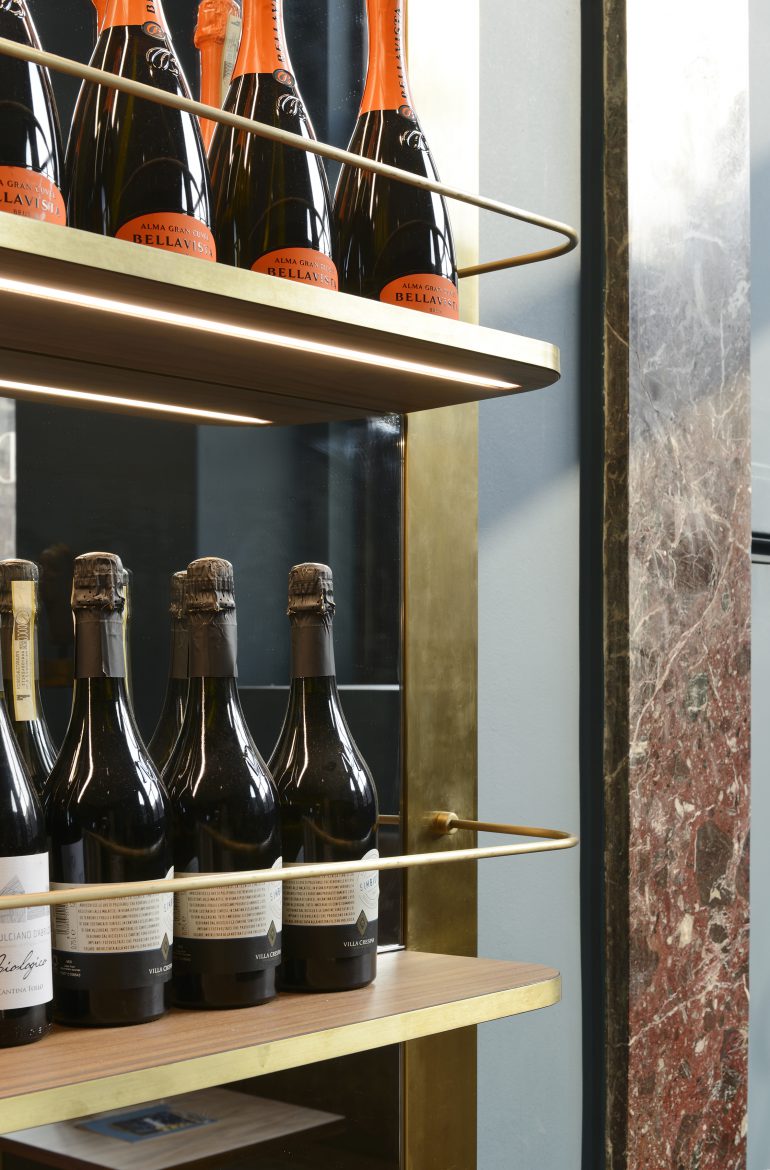 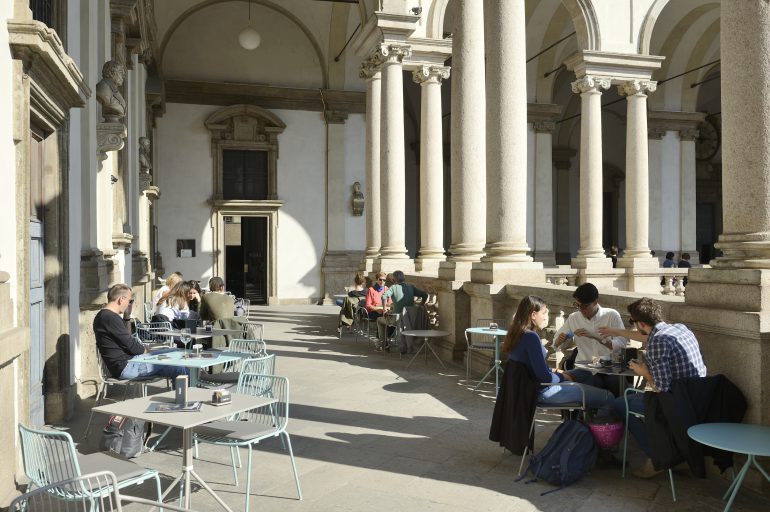