To provide the best possible service, we use cookies on this site. Continuing the navigation you consent to use them. Read more.
PROJECTS
·13 January 2021 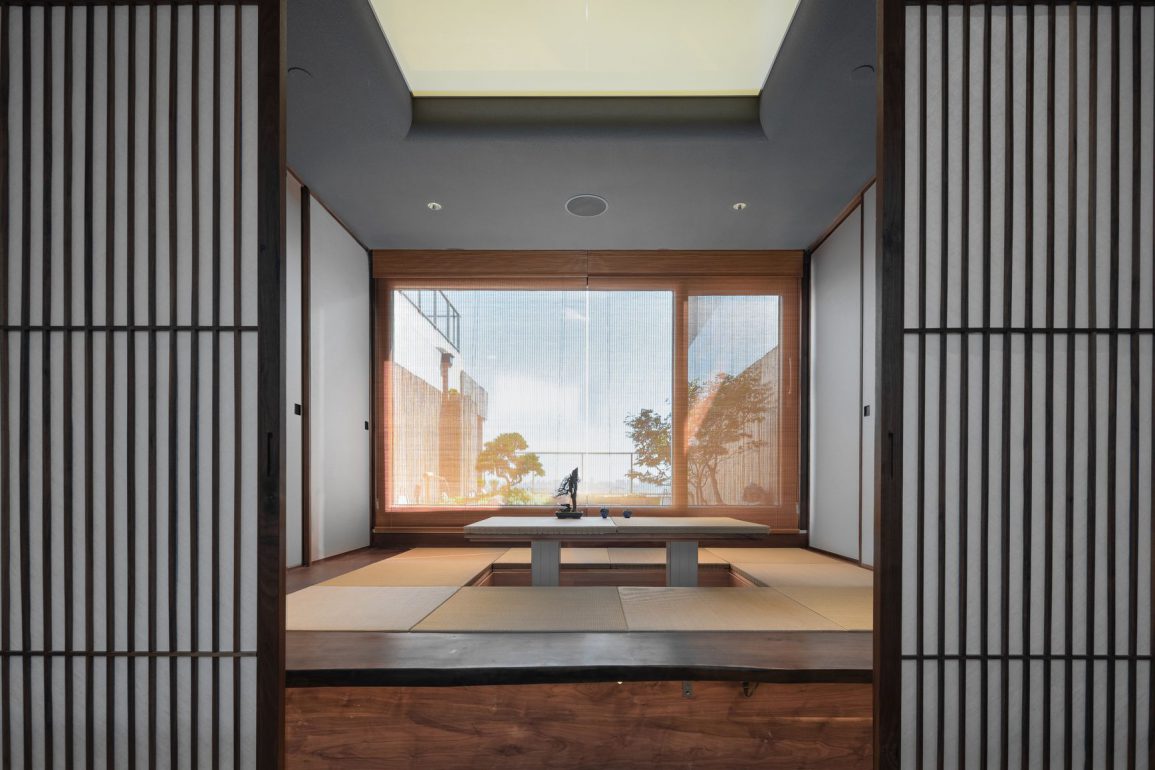 The project to renovate the top floor flat of a building on the west side of Beihai, renamed Yin’s House, was commissioned to designer Wang Daquan, who has managed to weave East and West, new city and old capital, tradition and contemporaneity, straightforward clarity and chaotic metaphor into one space. In developing the project, the designer had to revolutionise many traditional cultural elements and make them functional in the space.

The flat consists of an area of 300m2 and a Japanese courtyard located in the south-east and offers a wide view over the city of Beijing.
The building has a special structure that allows natural light to filter in and illuminate the spaces of the house, integrating the outdoor atmosphere with the indoor one.
Due to the building’s unique structure, the interior space becomes relatively open with sufficient lighting after the non-structural walls are removed. The construction method brings ever-changing natural light into the interior. Filtered by the spatial structure and material, and integrated with the layered landscape, the interior and exterior are closely connected.

Among the elements most closely linked to tradition is the tatami room, separated from the courtyard by a window, where the owners can enjoy a cup of tea in the sun. This place symbolises tranquillity and clarity of thought, an environment emphasised by plants and small streams of water.
Adjacent to the tea room is the corridor, divided by a sliding wall, which serves as a pathway between the entrance to the flat and the central rooms.
At the end of the corridor, the Chinese ink painting leads to the open functional area of the flat.
The living room and dining room are clearly separated, while the kitchen is flexibly incorporated into this area through a large glass partition.
Next to the living room, a door hidden in the wall divides the lounge area.
The bedrooms and main bathroom are distributed on either side of the corridor behind the door, which adopts a Japanese-style design and adds a more flexible space and an accessory function.
The flat is characterised mainly by grey and wood-coloured tones, while magenta and yellow elements become the most eye-catching focal points of the space.
The lines of the interior structure are soft and open, reflecting the simple lifestyle in a functional way. The arches mark out the profile of the rooms, leaving a large central space that recalls oriental charm.

The designer and the owner then chose the furniture together, paying close attention to detail and quality. These include FLOS floor lamps, B&B sofas and traditional Spanish dishes, which give the room a sense of internationality. 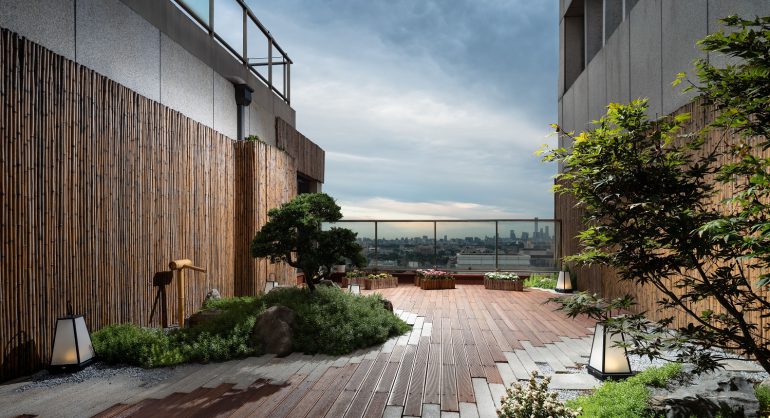 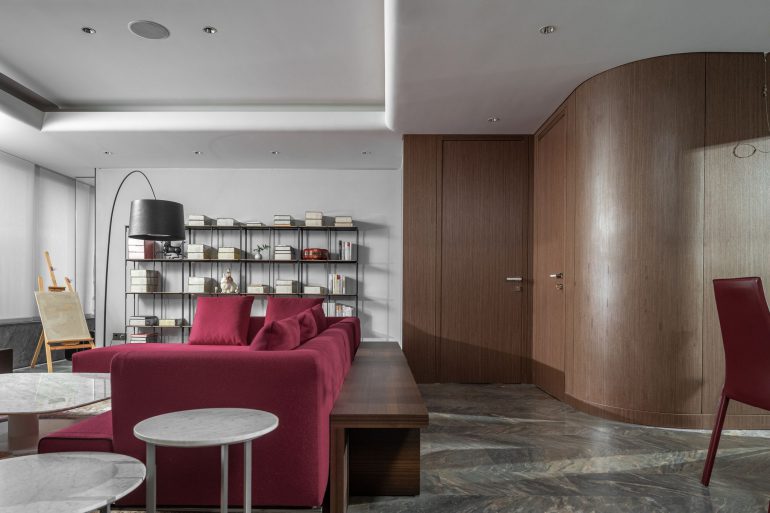 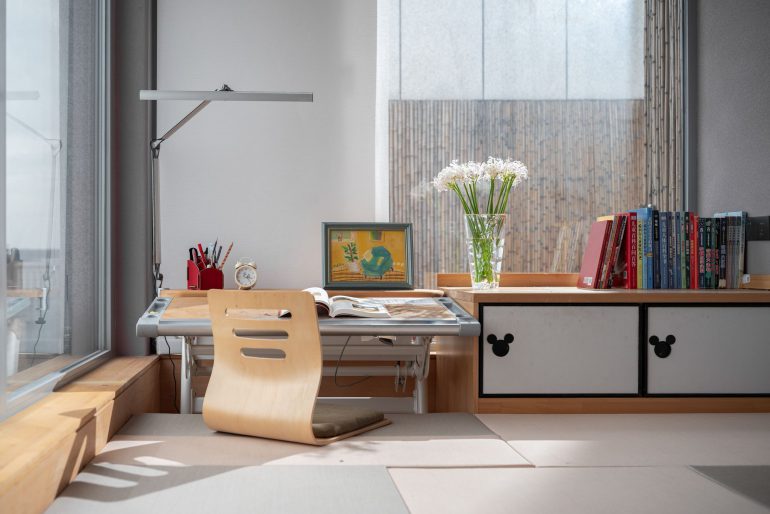 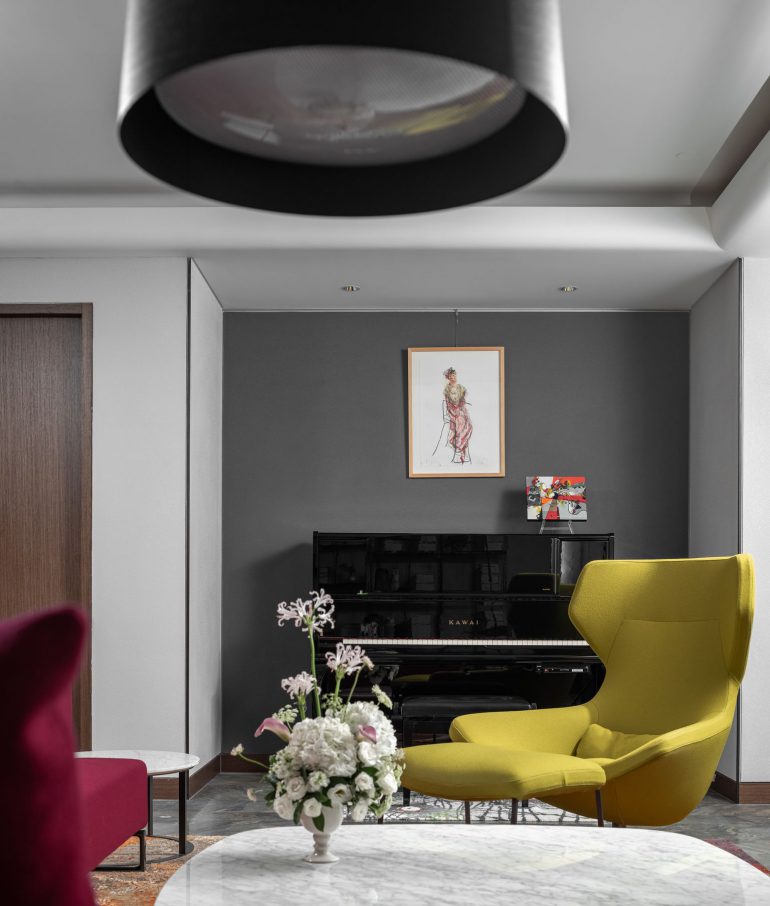 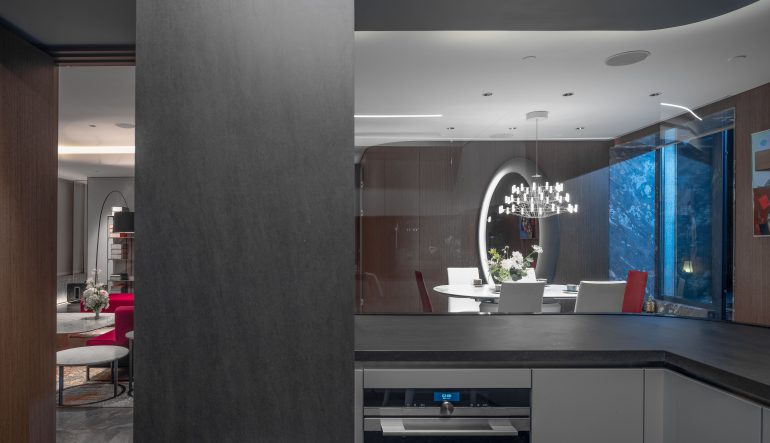