To provide the best possible service, we use cookies on this site. Continuing the navigation you consent to use them. Read more.
PROJECTS
·13 May 2019

Utopia, a Library and Academy for Performing Arts 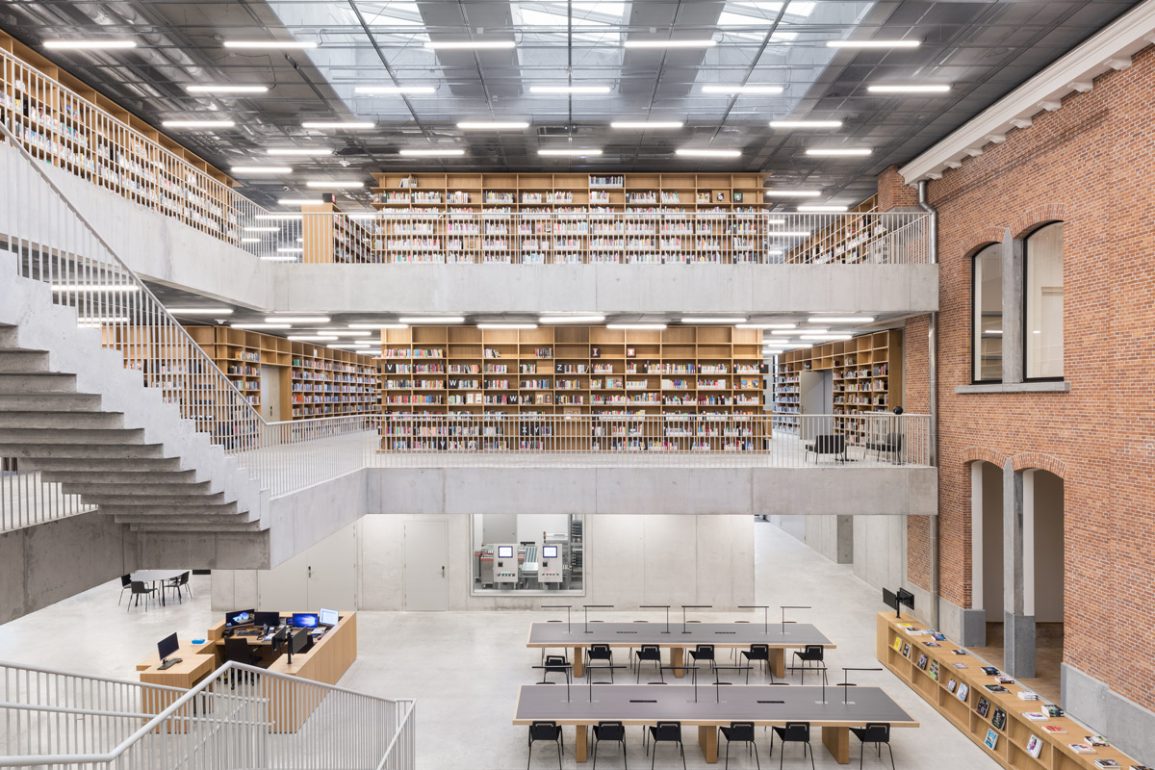 Utopia, the Library and Academy for Performing Arts, housed within a brand new building designed by Kaan Architecten, has opened its doors to the Flemish city of Aalst, following an open competition launched in 2015 by the City Council. The 8.000 square-meter brick structure incorporates a striking historic building from the second half of the Nineteenth century and rejuvenates the urban landscape while elegantly giving expression to the required functionality.

Taking its cue from Thomas More’s acclaimed book “Utopia”, first printed by prominent Aalst citizen Dirk Martens, the new building has been slotted into the urban fabric to enhance the characteristic irregular streets and intimate spaces of the city center, and to interact with them. Three new squares have been created alongside Esplanadestraat, Graanmarkt and Peperstraat.

The so-called Pupillenschool, a building from 1880 was formerly a school where children of soldiers were educated until the age of 16 when they could register for a regiment. It has been embedded into Kaan Architecten’s design and is now the cornerstone of the new building. Both outside and inside, the historic façades blend perfectly with the generous spaces, while the brickwork dialogues with light gray concrete elements.

Utopia, the city, and its residents are inextricably linked, and can gaze at each other through tall and wide openings, carefully sliced out of the brickwork. The entrance to the building is located on an intimate square between the reading café and the auditorium. Moving through the wide hall, the open interior landscape of the building unfolds from floor to ceiling, and cantilevered into the space are several thick concrete floors that appear to float. Hanging at varying heights, each level features bookshelves and reading tables, while looking into the atrium and towards the brick façade of the pre-existing building. Moreover, a 11.50 meter high bookcase stretches towards the ceiling, filled with books donated by each Aalst resident.

The concrete structures seem to be supported by books. The bookcases are pushed up against concrete discs which allow the floors to cantilever out without extra support. Mimicking the treads, the stairs zig-zag upwards, giving the staircase a sculptural presence at the periphery of the magnificent atrium and reading room. The ceilings have been minimalized to the point of being almost undetectable. All the technical systems are concealed behind a stretched metal-coloured mesh that softens the strong daylight and creates a pleasant atmosphere during the day. 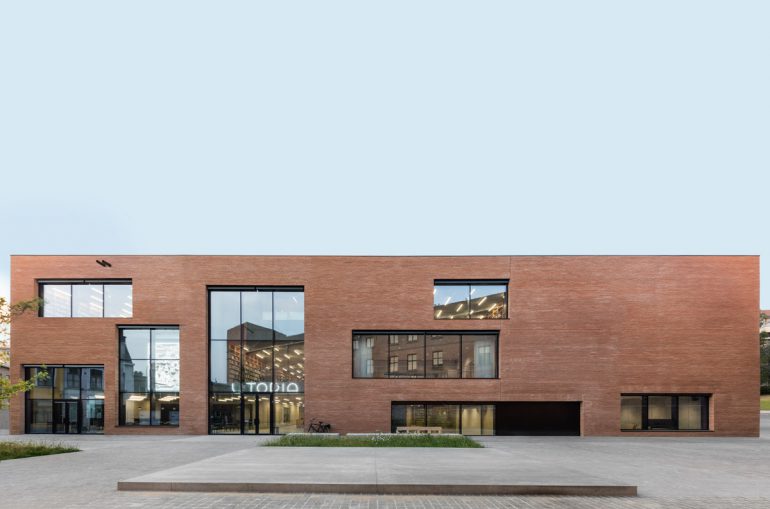 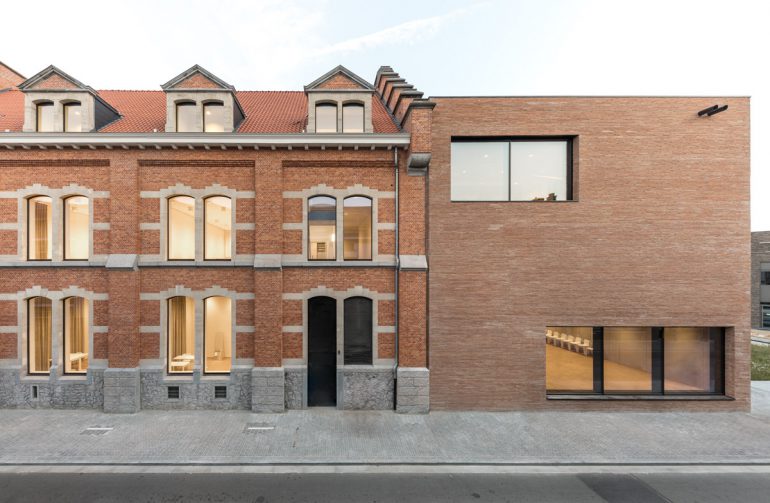 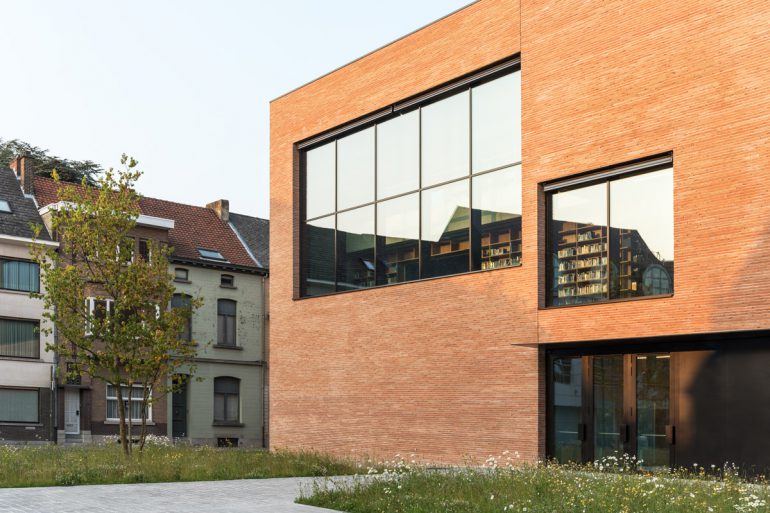 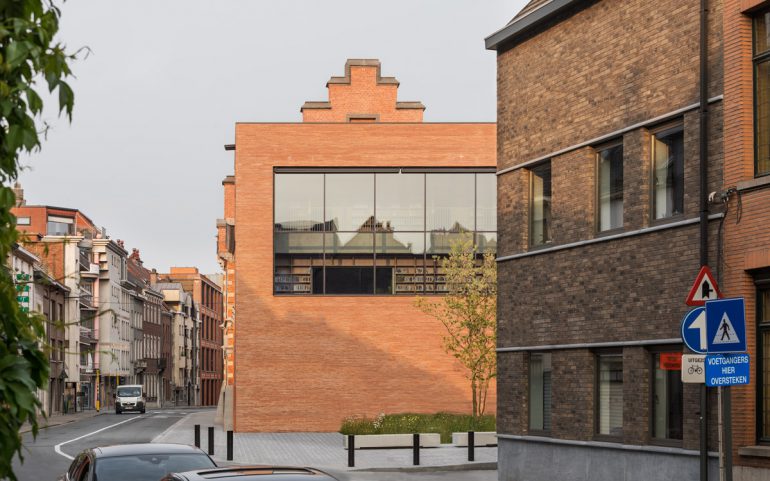 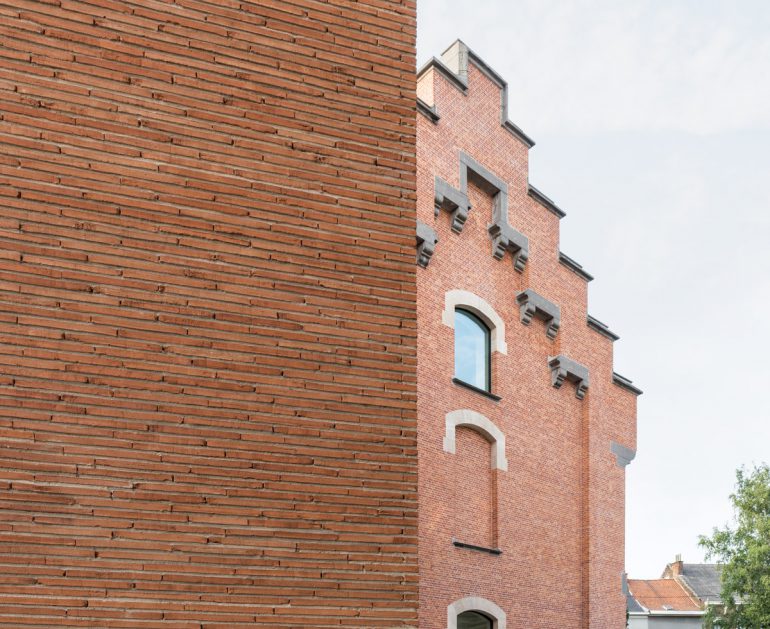 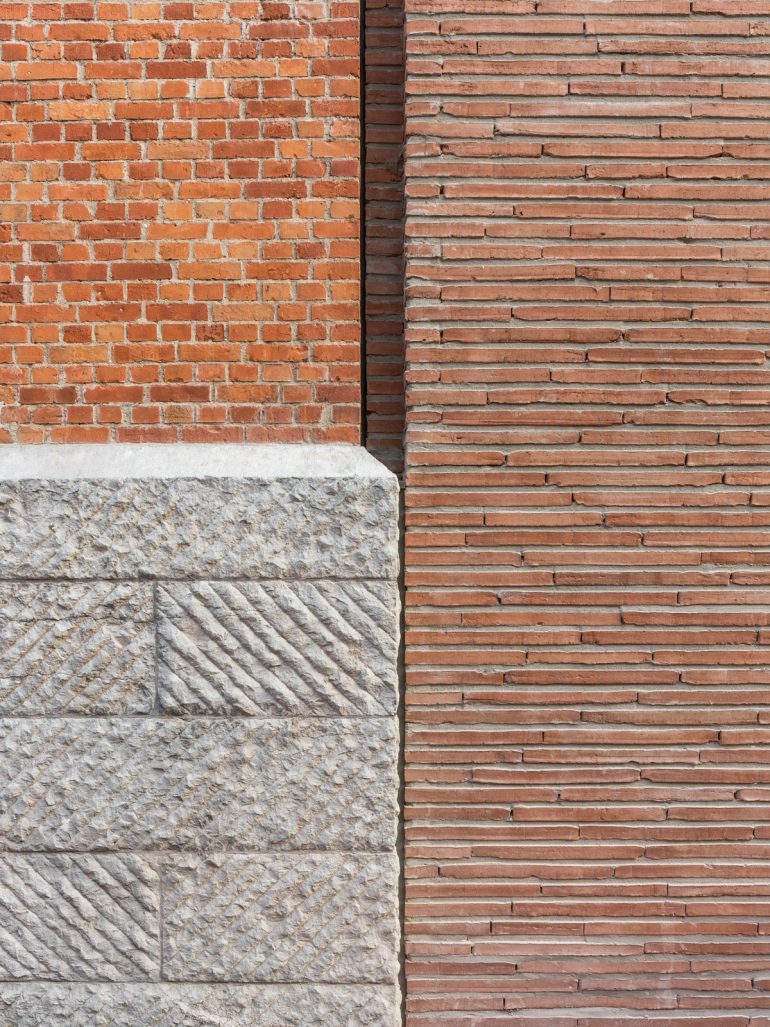 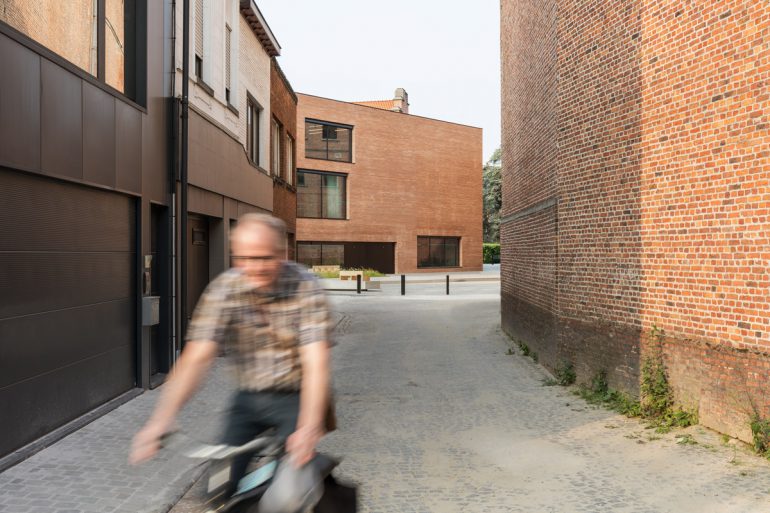 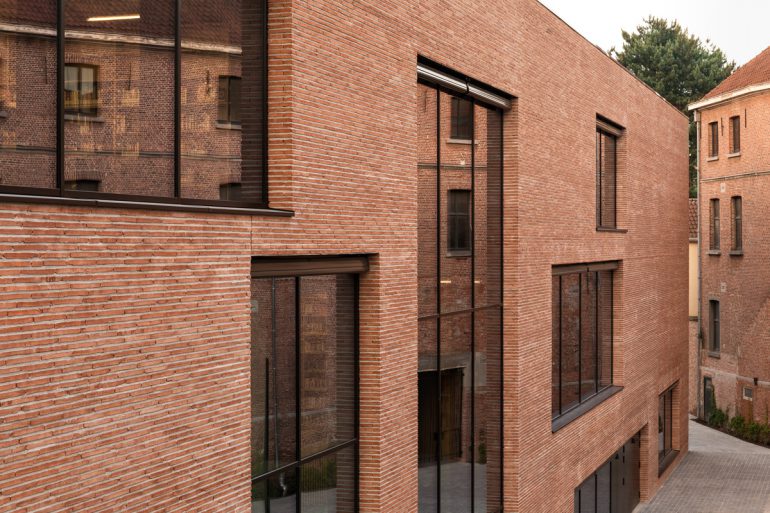 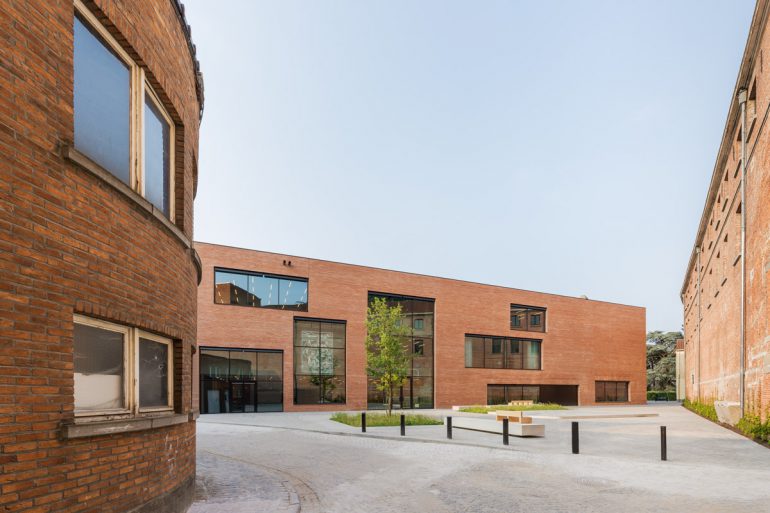 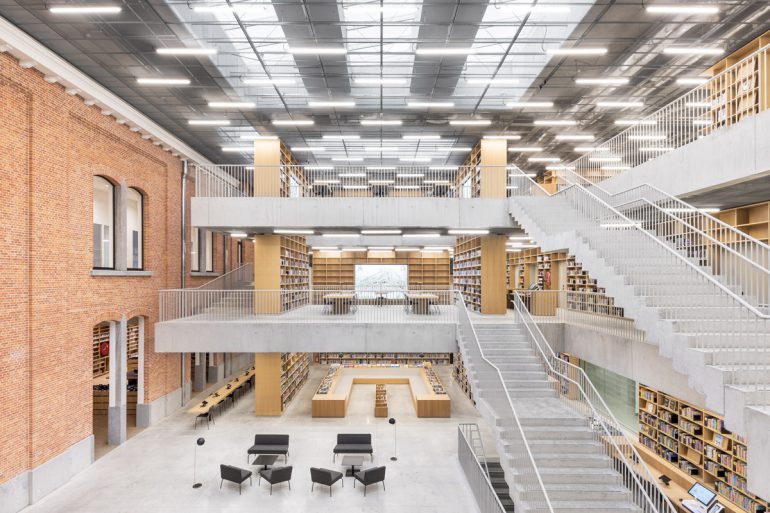 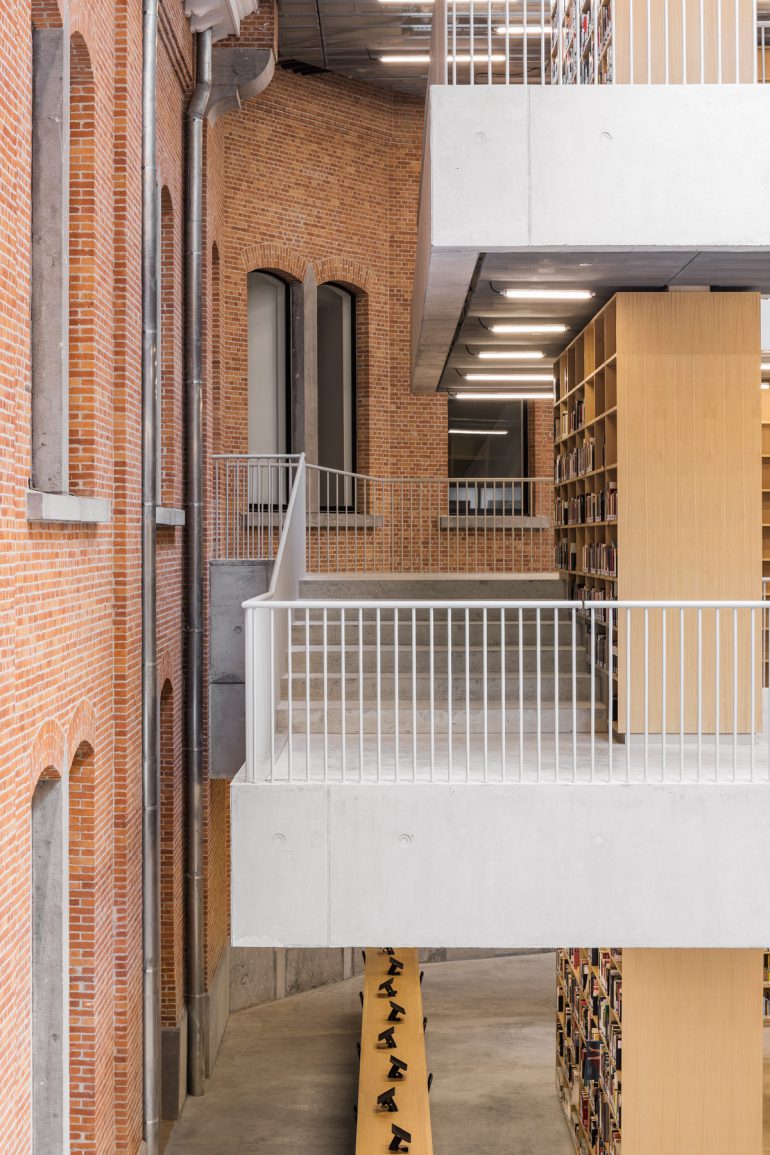 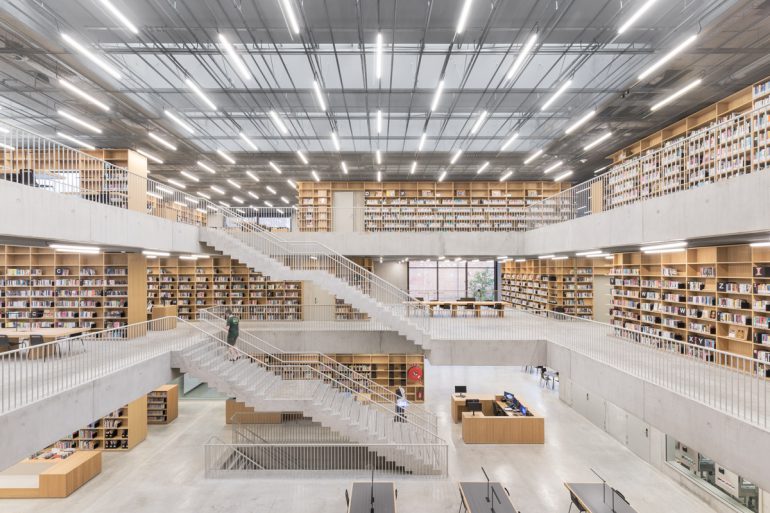 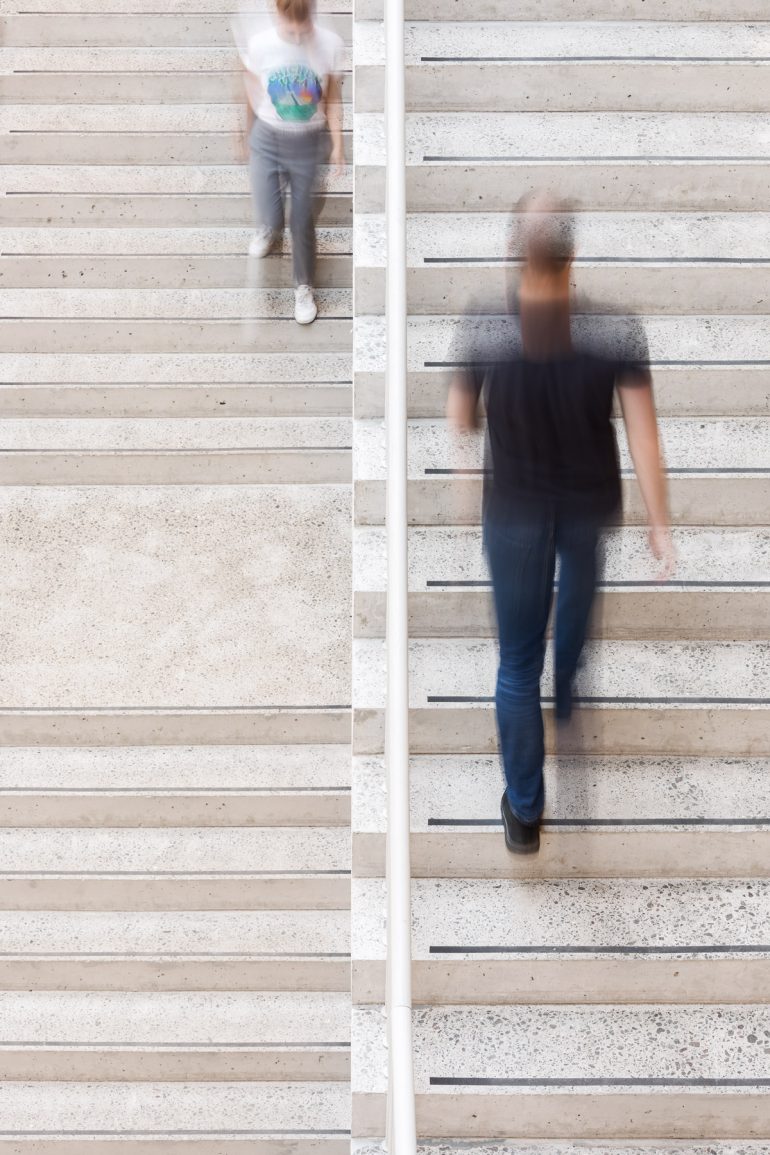 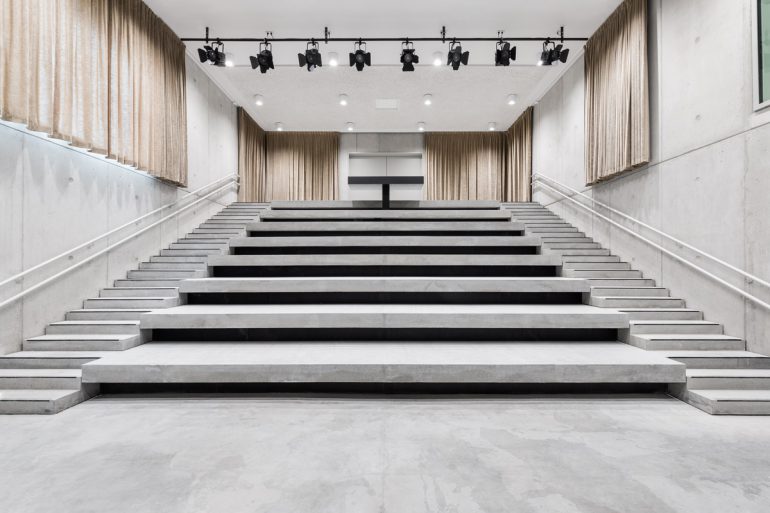 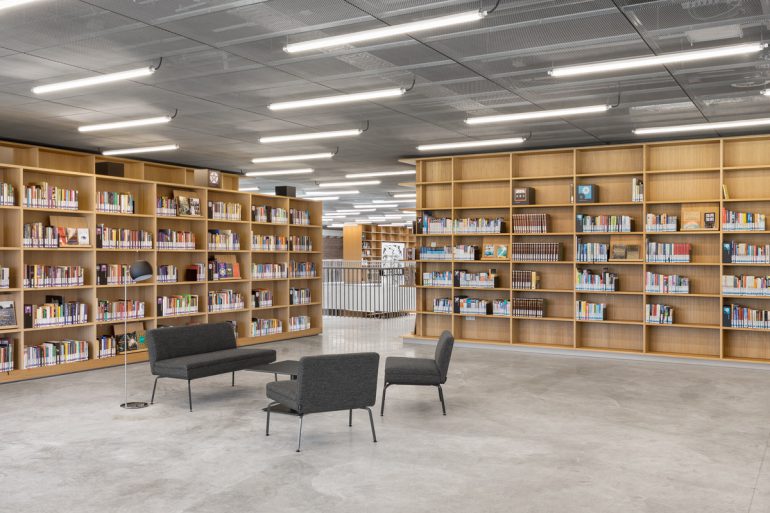 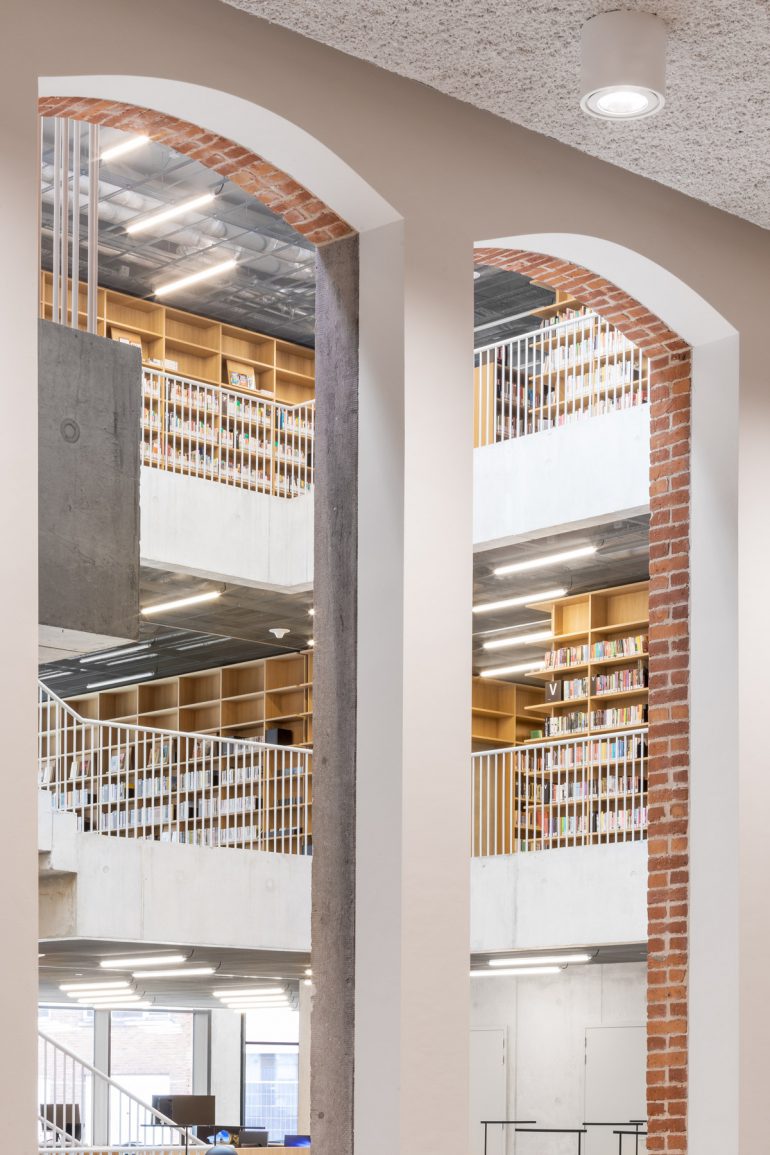 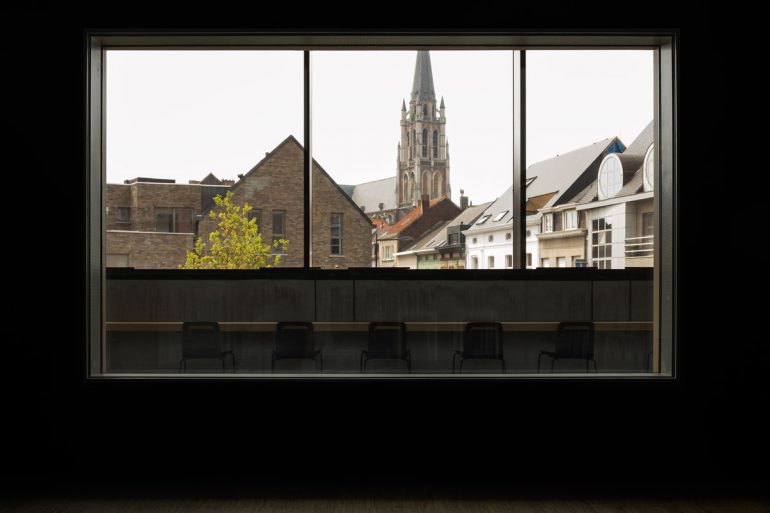 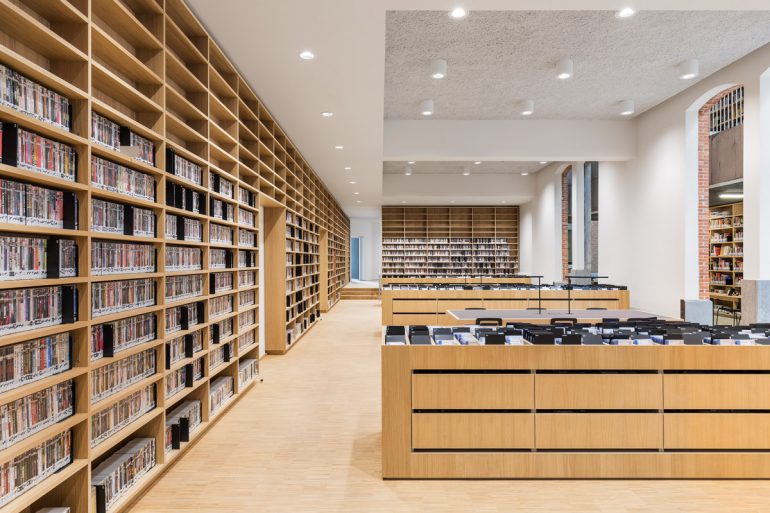 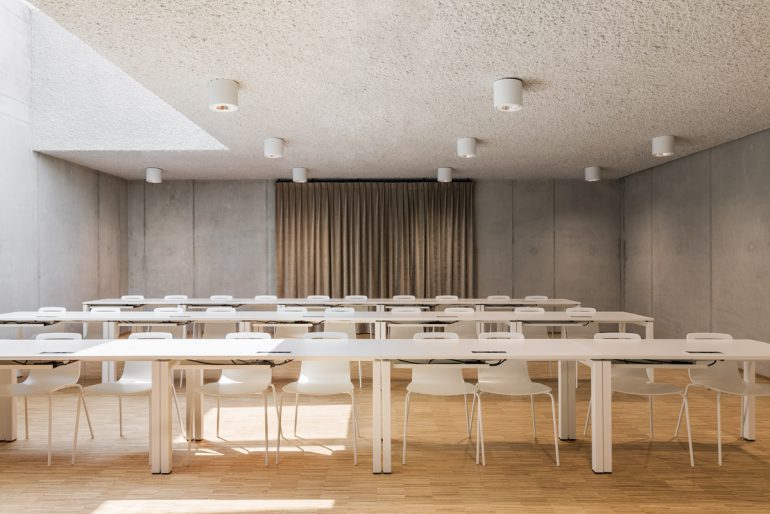 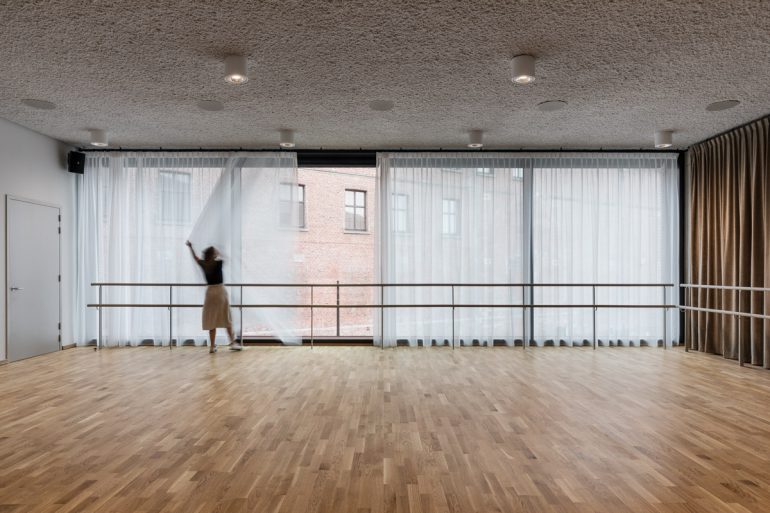 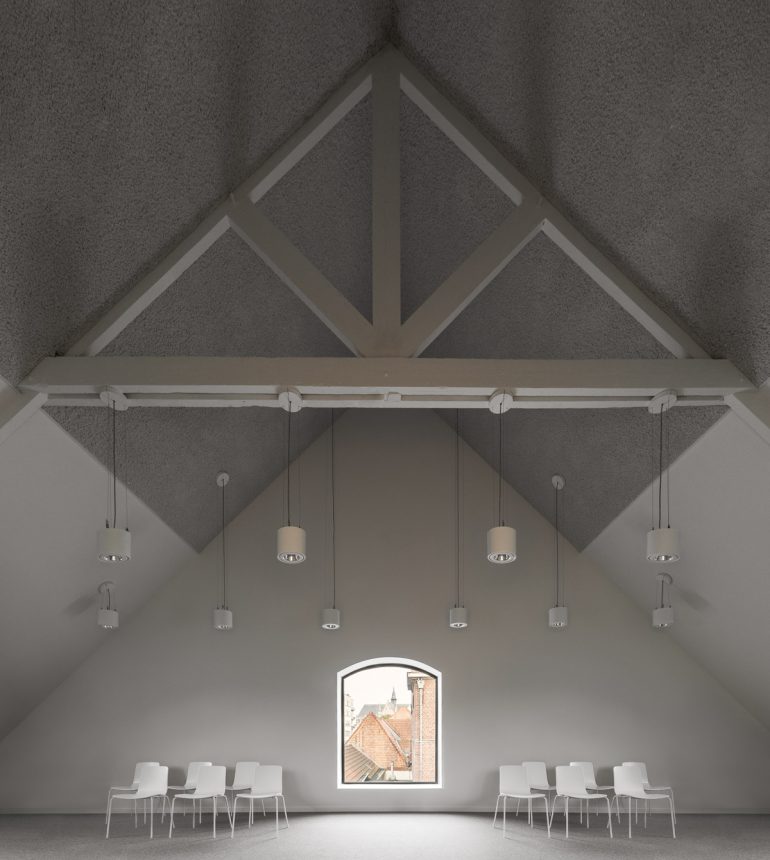 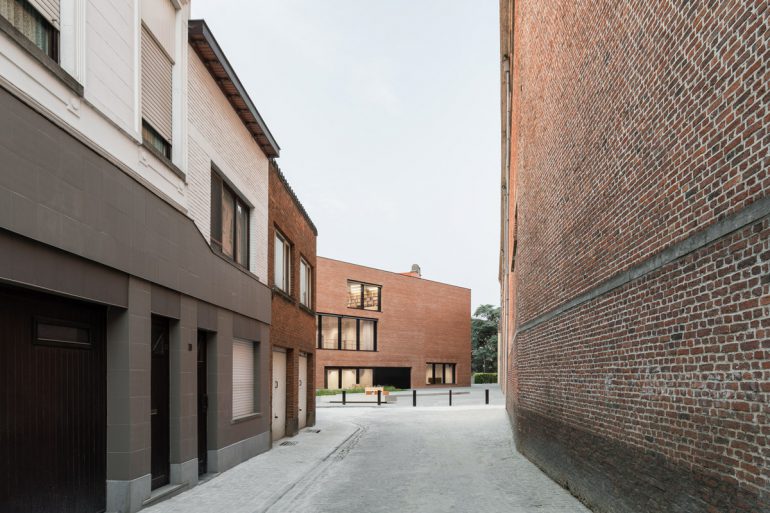 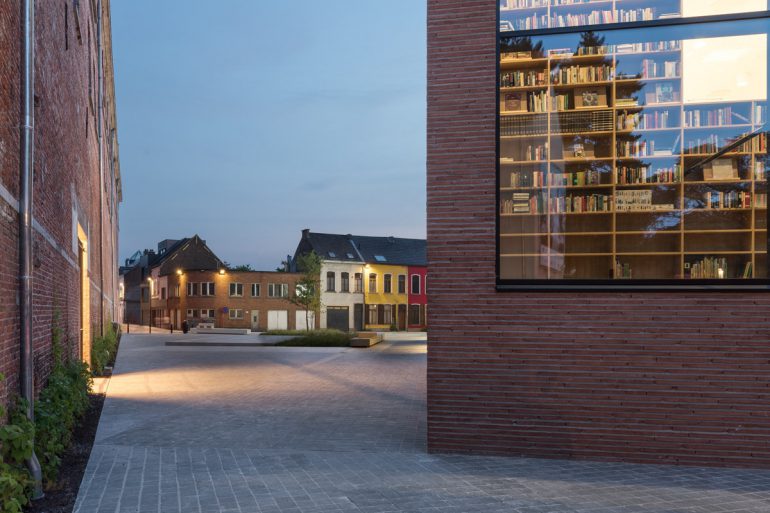 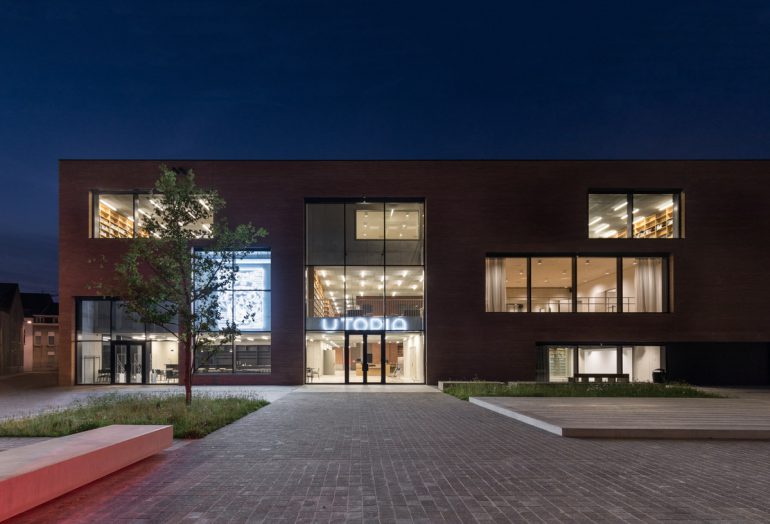