To provide the best possible service, we use cookies on this site. Continuing the navigation you consent to use them. Read more.
PROJECTS
·13 October 2019 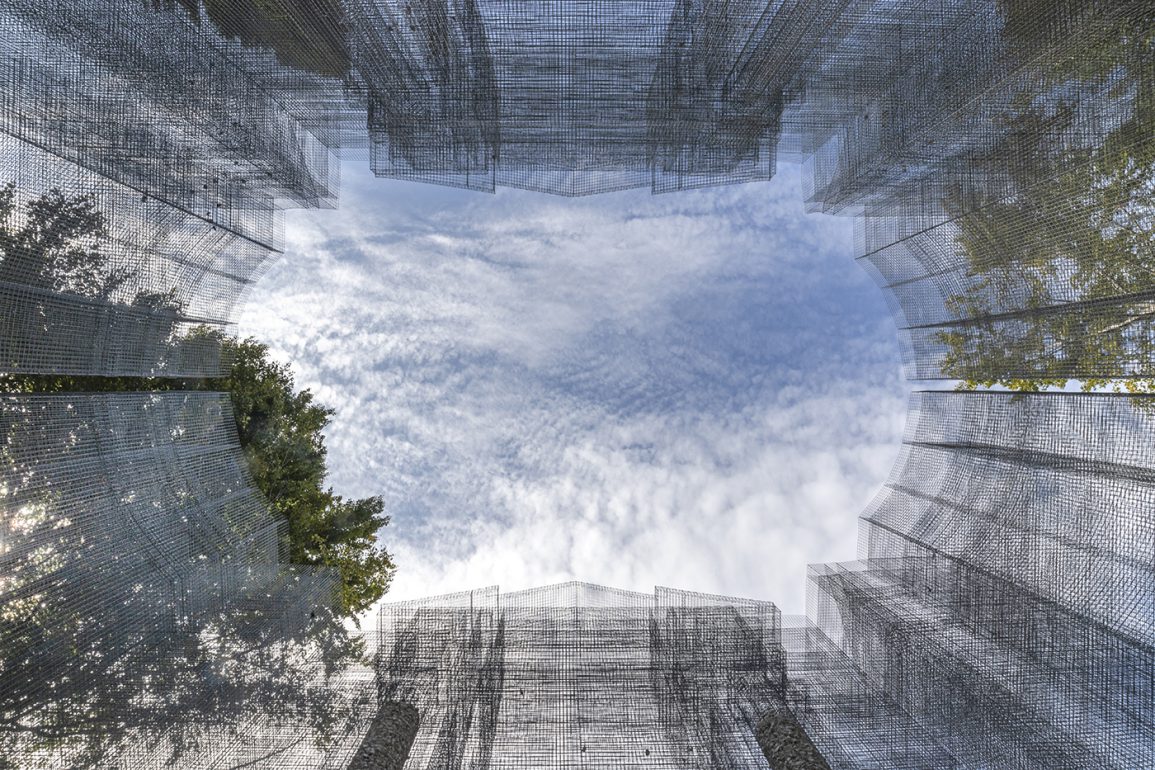 Edoardo Tresoldi has unveiled “Simbiosi”, his new site-specific artwork for Arte Sella sculpture park, the renowned open air museum in Italy’s Trentino Valley. For over thirty years, Arte Sella has intertwined Nature and Art thanks to artworks by internationally acclaimed artists and architects such as Eduardo Souto de Moura, Kengo Kuma, Michele De Lucchi, and Ettore Sottsass. Badly damaged by the last winter’s storm, Arte Sella has managed to reconstruct most of the artworks and paths, and to reopen to the public in last Spring.

“Simbiosi” is a turning point in the Italian artist’s evolution: for the first time, Tresoldi hybridizes the transparency of the Absent Matter, expressed through the wire mesh, with the materiality of local stones. Entirely open towards the sky and reaching a height of 5 meters, “Simbiosi” composes a space of rest and contemplation, a ruin suspended between architecture, nature and temporal dimension. The artwork seems to challenge the force of gravity, like a body in suspension that levitates between consciousness and unconsciousness, between the material and immaterial world. A living organism, permeable yet intimate: an emotional communication channel with nature.

Unlike the “conventional” ruin, defined by a process of organic deterioration, with “Simbiosi” a reconstrution takes place, following unusual rules of matter, where the artist’s design inserts itself in the ruin’s structure. Indeed, the Absent Matter here embodies the mental shape that tries to define and retain the weight of matter by giving it a rational form.
“Simbiosi” is an interpretation of the surrounding landscape through the intentional connections between architectural and natural elements, whose continuous exchange defines the aesthetics, meanings and logics of sculpture. The architectural archetypes, through which Tresoldi narrates the landscape’s elements, become here the channel through which they can be interpreted.

If Man’s attraction to the ruin, according to François René de Chateaubriand, arises from “une conformité secrète” between the destroyed monuments and the transience of our existence, here it is interpreted not as the expression of the idea of a winning humanity, like monumental architecture does, but rather one of human fragility.
“Simbiosi ” responds to the urge to analyze something you want to know. The artwork oscillates between earthly and spiritual dimensions; it embodies the primordial human vocation to merge with the natural element and, at the same time, to interpret it; the need to become part of the landscape and to represent it according to the codes that belong to it.

Sculpted by the surrounding landscape, “Simbiosi” lives and breathes in deep connection with Arte Sella park, which itself has undergone the transformative action of nature: the same hill where the installation is located would not have existed had the 2018 storm not taken place. Nature, growing slowly, will define a new, additional architecture: same as the other artworks, “Simbiosi” will become part of the Arte Sella fabric and will ultimately blend with the park. 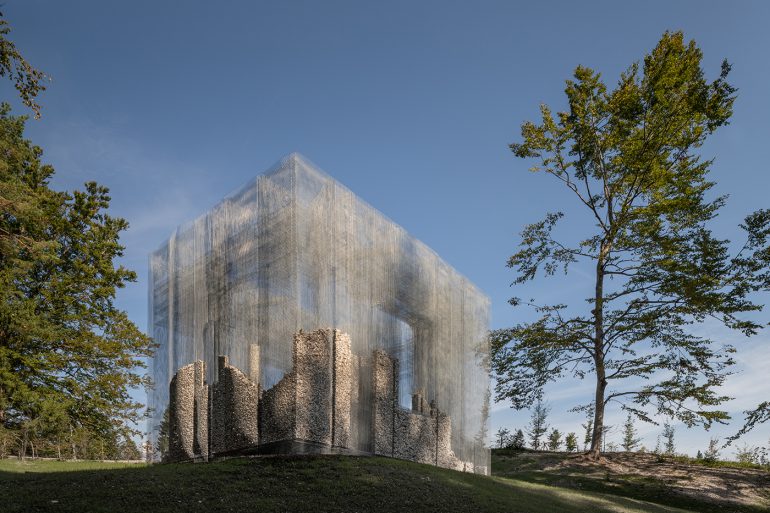 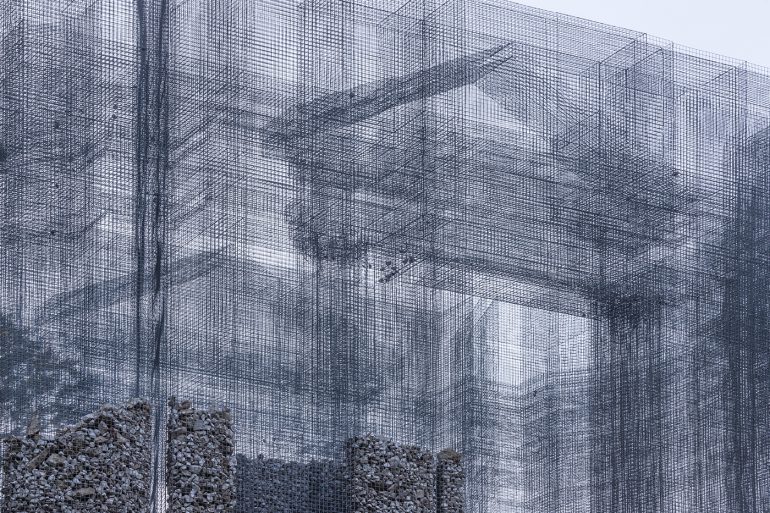 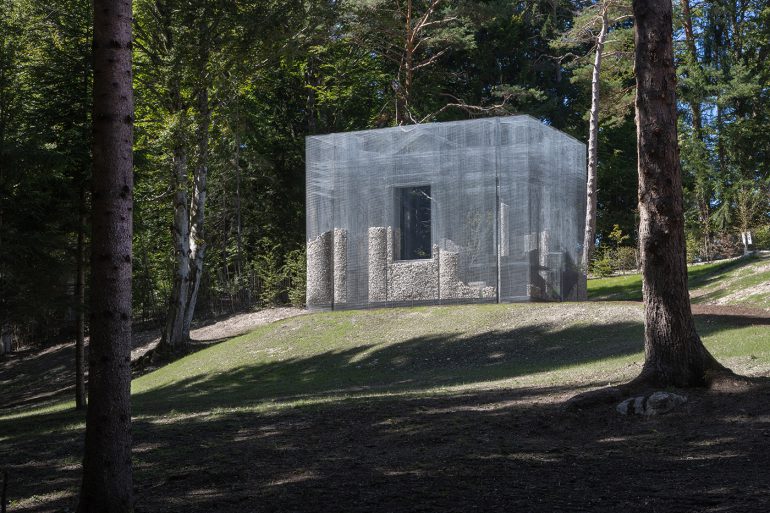 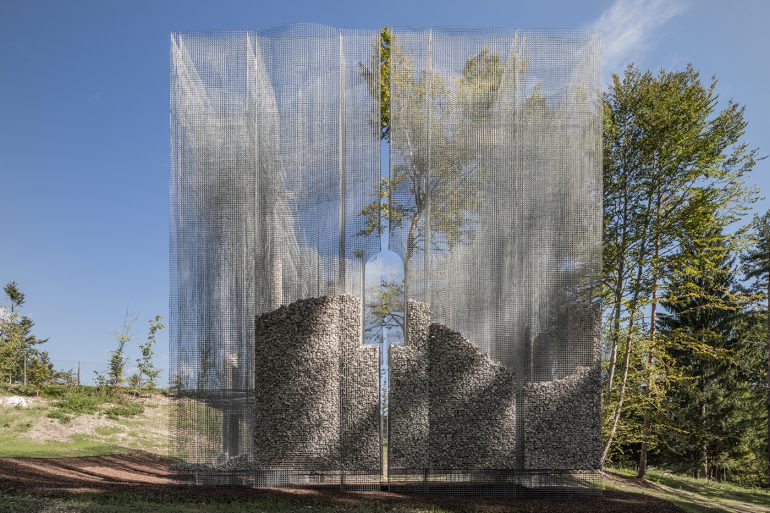 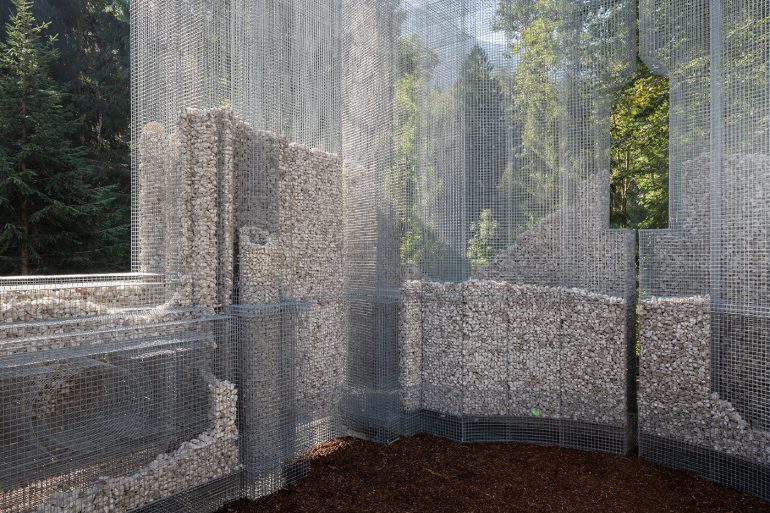 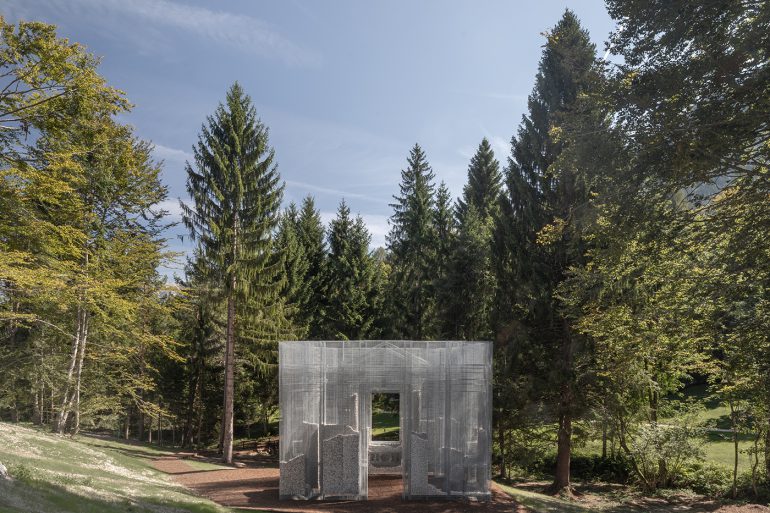 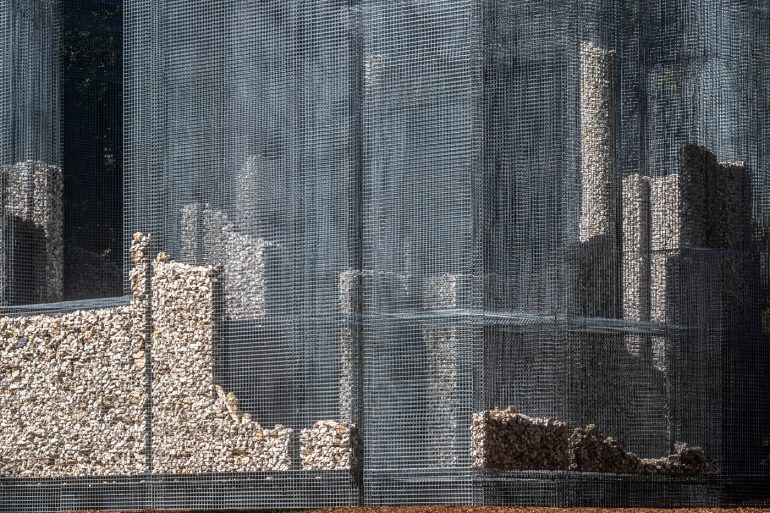 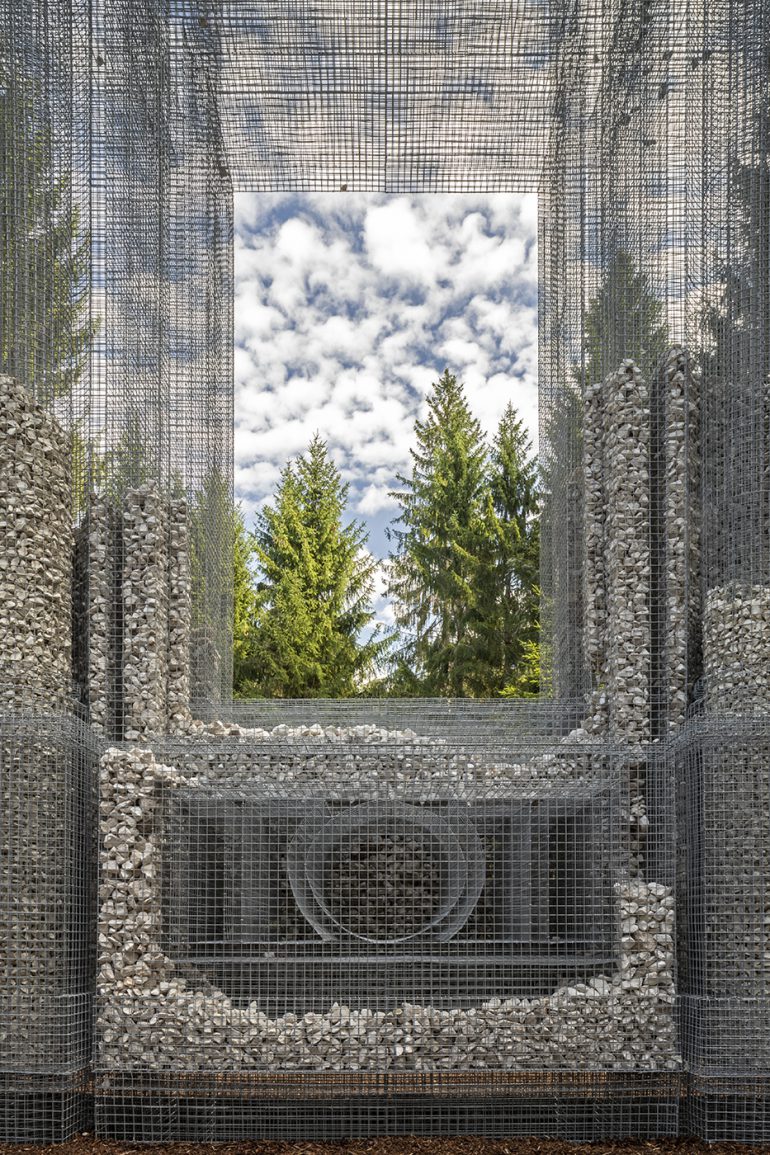 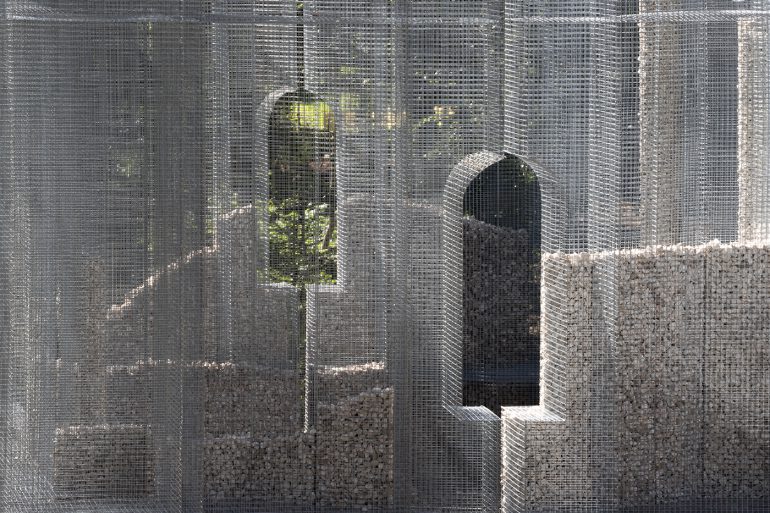 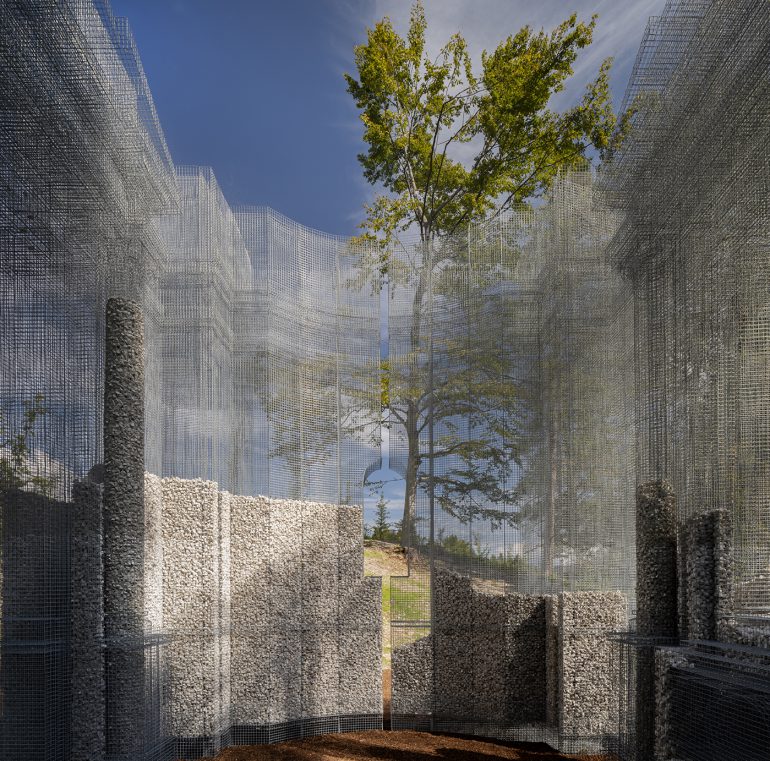 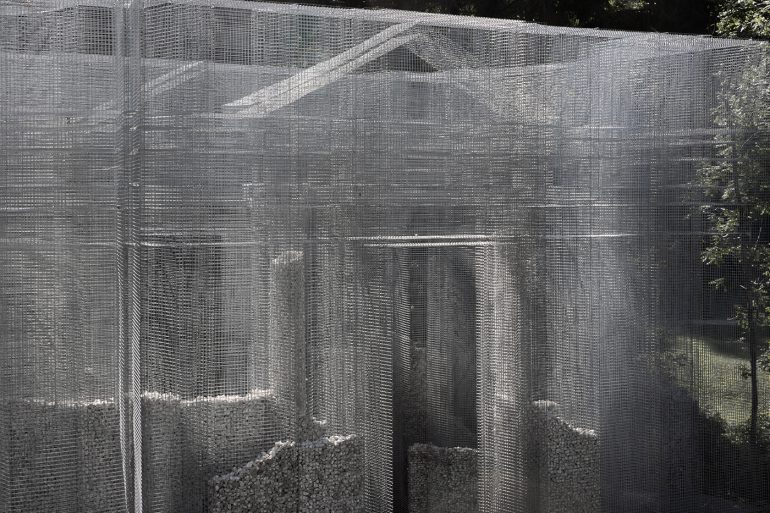