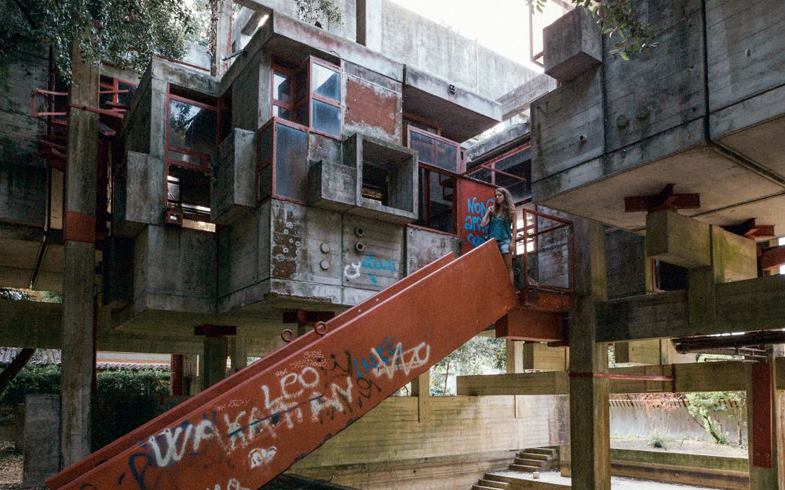 Fregene is a seaside village that exists on two different levels. The seaside bathing rituals are still observed in the shade of a centuries-old curtain of pine trees, originally planted by Pope Clement IX in the midseventeenth century to protect crops on the Maccarese plain from damaging salt-laden winds. At nearly thirty metres high, this thick and compact foliage has grown together and has woven itself into a single natural artefact. In fact it is considered so valuable that already back in 1920 the government declared the pinetum a National Monument. Silent and impassive, supported on colossal trunks that emerge as totems in the middle of the tracks and paths, the Fregene pine trees seem to belong to another dimension compared to the abstract geometries of the city below. Here, numerous summer houses and holiday homes fill the more or less regularly drawn up urban grid pattern and it is impossible to recognize Fregene today as that Capalbio forerunner where even in the early 1960s Fellini, Flaiano, Moravia and Lina Wertmüller sun-bathed in relative isolation, protected by the access charge to the pine forest that kept the tourist masses on the shores of Ostia and Torvaianica.
Fregene’s Belle Époque was shortlived: in a few years the arrival of Elia Federici (the famous Roman builder to whom we owe the immense block of ‘Federici palazzi’ in Una giornata particolare), the removal of the toll and the summer opening of the capital’s largest nightclubs marked the beginning of an era of massive numbers, building speculation and proliferation together with endless queues on the Aurelia (because even today there is still only the one bridge).
Towards the end of the 1960s, a family of architects designed a building which bridged the gap between the two Fregene. Giuseppe Perugini, his wife Uga de Plaisant and son Rainaldo transformed the construction of their holiday home into an opportunity for technical testing, free reflection on living spaces and dialogue with the context of the pine forest which the same Rainaldo Perugini, now a professor of architectural history, defined as a genuine “building set created on an urban scale”.
In actual fact the Perugini house is not one but three experimental houses. The main building is the Casa Albero, a fully modular system of frameworks and suspended sheets, forever unfinished due to being potentially replicable ad infinitum. The exposed reinforced concrete structures form a horizontal symmetry which is echoed in the reflections in the water at the base of the building and which could be repeated almost up to the top of the pine trees.
The interior is a single and kaleidoscopic space where the floors multiply and thanks to the special structural system, the glass can creep into and bully its way through the concrete surfaces, so much so as to deny the connection between horizontal and vertical.
The offsetting and height difference between the different modules ensure the privacy of the bedroom without the need for partition walls while the bathrooms are rounded capsules that emerge and project from the main body, the only exception in this Cartesian building composition.

The elevated Casa Albero, accessible by a single flight of stairs that was originally used as a drawbridge, is in the words of Rainaldo Perugini an “un-finishable house” and one which acts as a counterpoint to the “single unit house”, an enigmatic five metre diameter sphere designed to function as a self-contained housing module.
Inside it was to have contained a self-supporting structure (which was never built) that would have laid out the spaces and acted as support for a spherical satellite-toilet. At the opposite end of the garden, the “repeatable house” composed of three metre cubic modules, is a further variation on the concept of minimum housing. Unused and abandoned for many years, the Casa Albero will soon be converted into a museum and space for events. Suspended for now in time and in space, terribly glamorous with its forms and shapes balanced between constructivist references and extraterrestrial fascination, the Perugini’s experimental house remains above all the surviving fragment of a utopia, testimony to an alternative (anti-) urban vision in the Fregene pine woods that remains confined within a single plot of land. 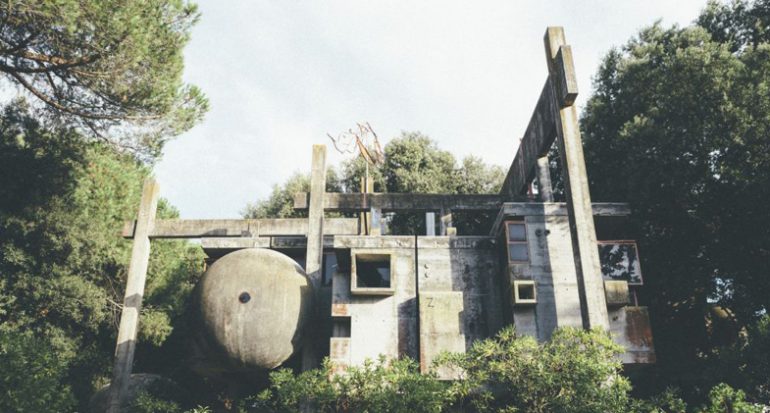 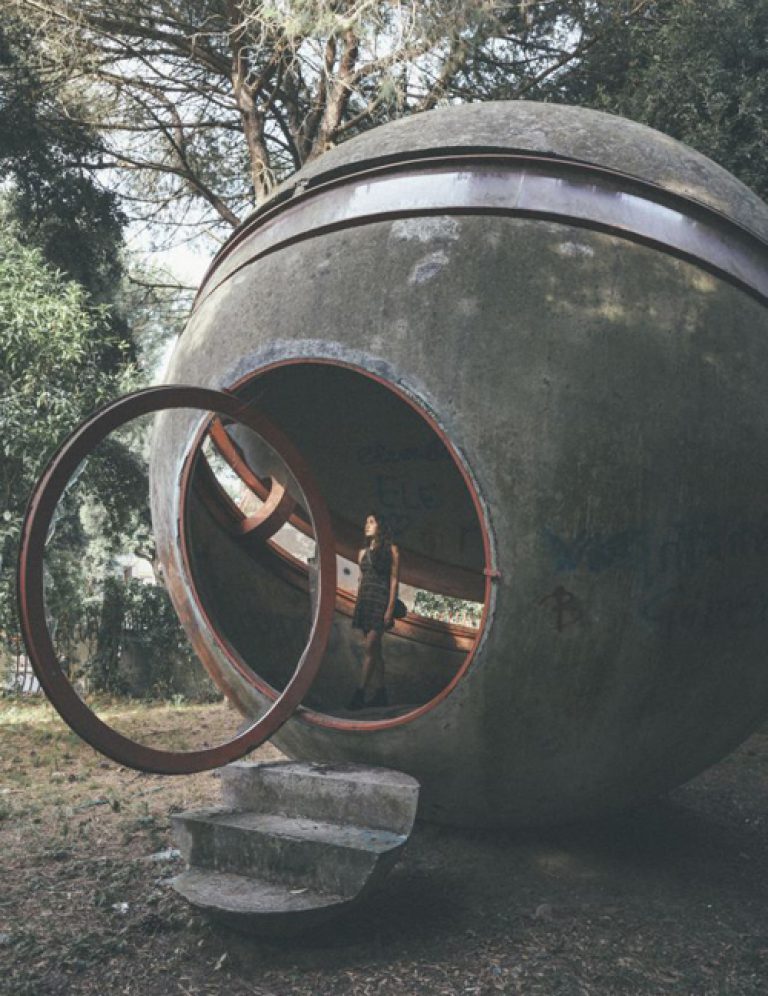 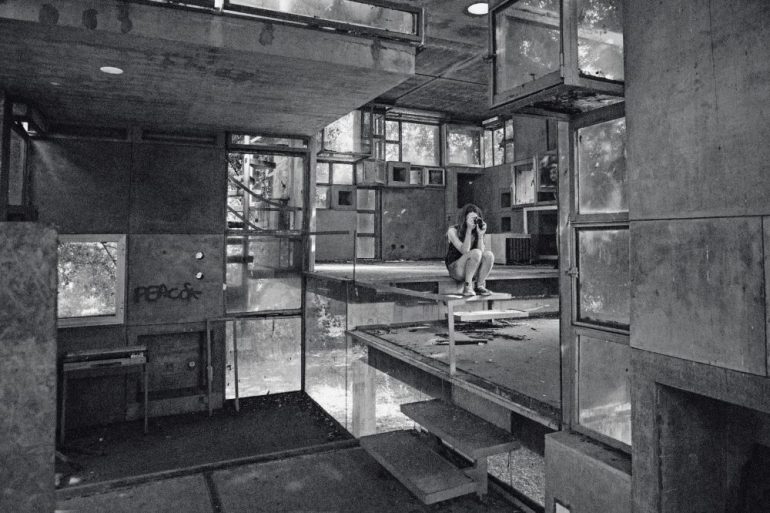 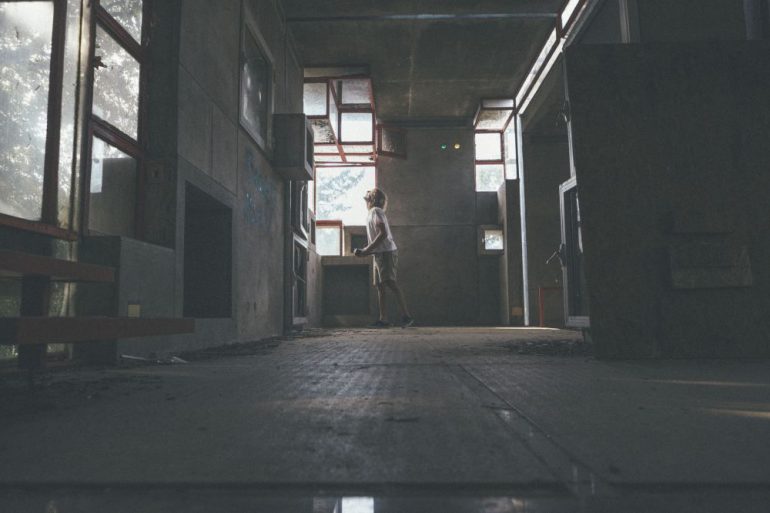 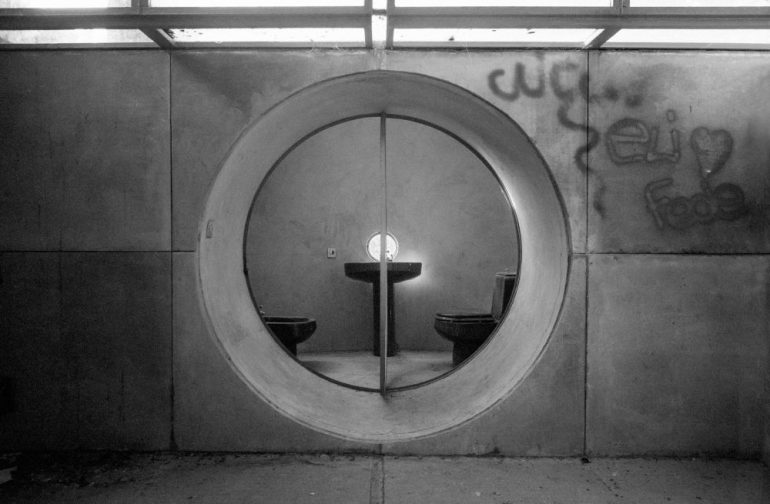 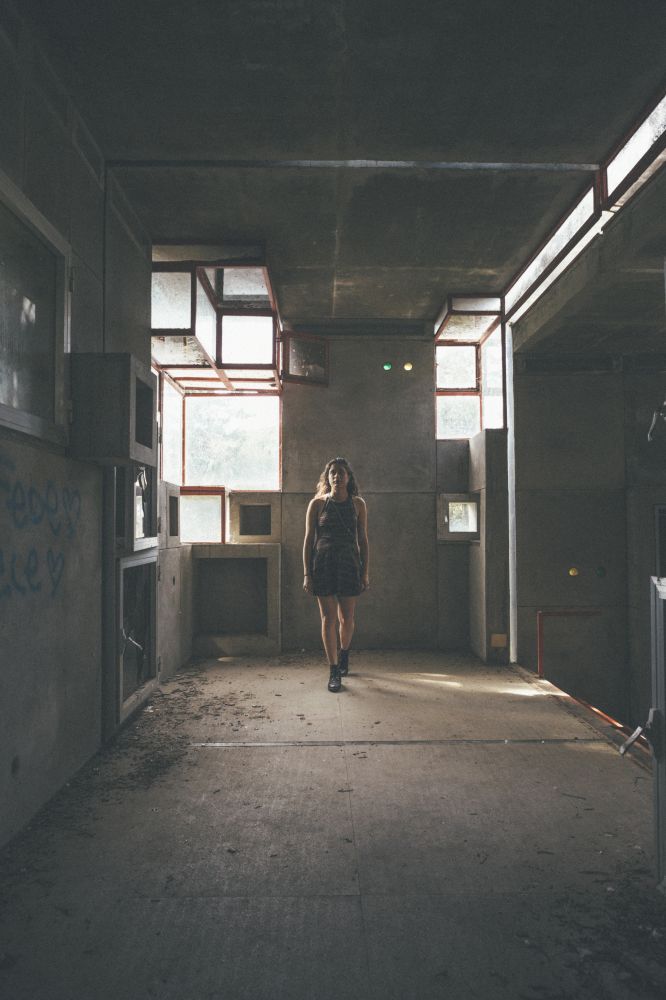 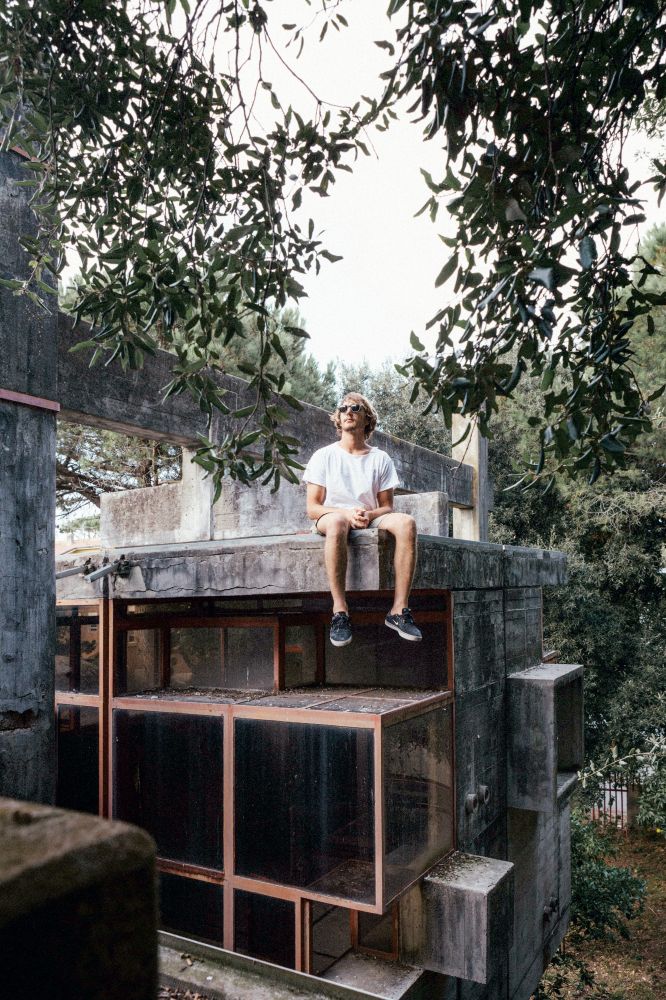 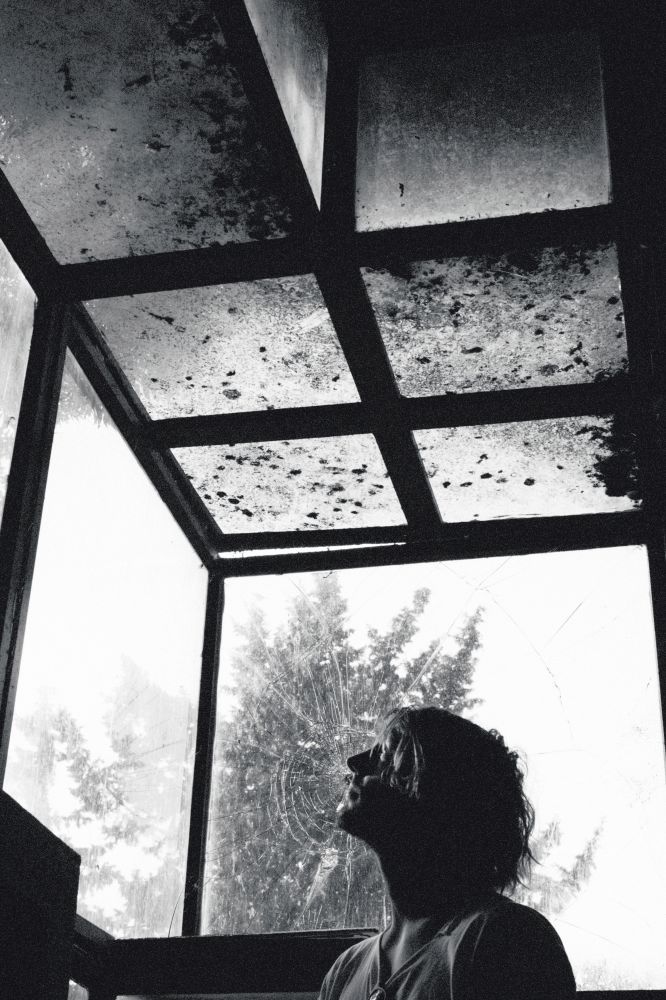 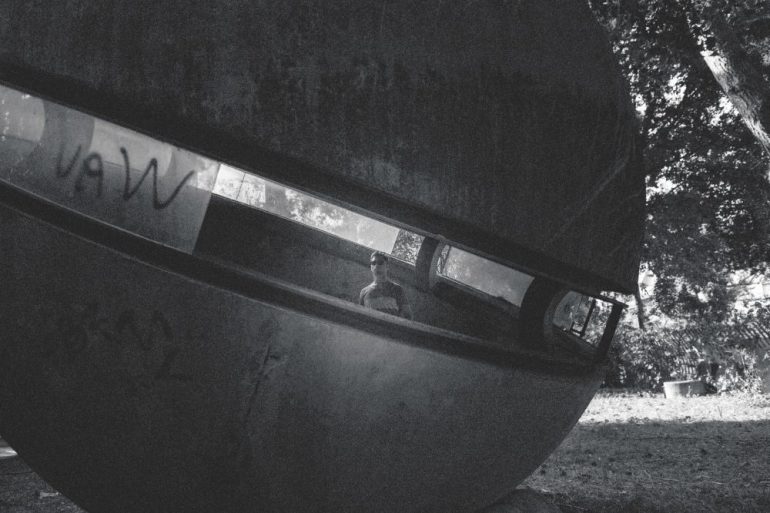 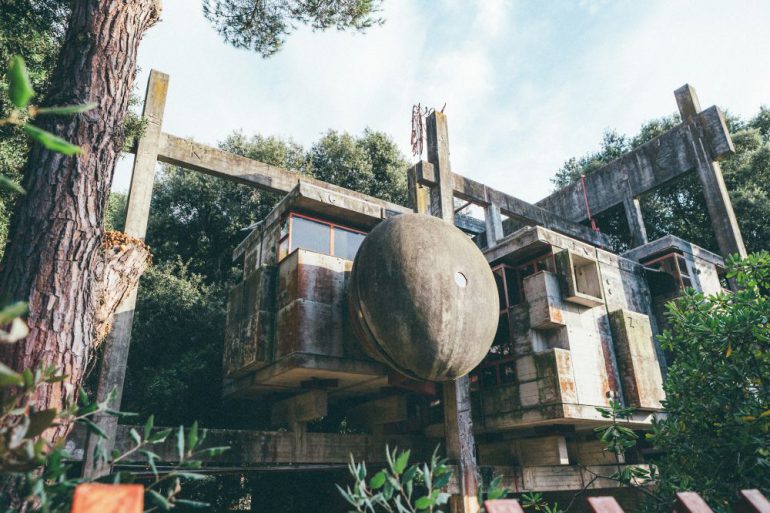