To provide the best possible service, we use cookies on this site. Continuing the navigation you consent to use them. Read more.
PROJECTS
·23 July 2018 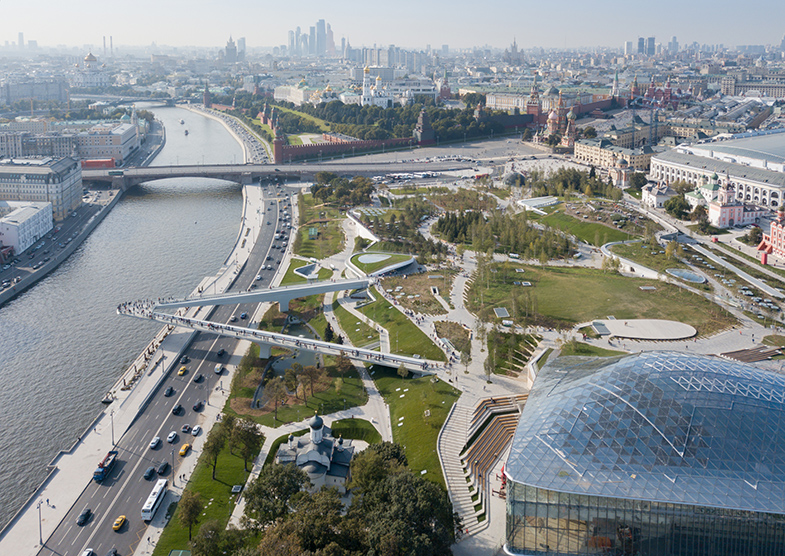 Designed by architects Diller Scofidio + Renfro, Citymakers and Hargreaves Associates, this new public space has been a big draw for Muscovites. Zaryadye Park has become one of the most important contemporary spaces in Moscow, exhibiting high-quality infrastructure and landscapes, as well as extraordinary views to the Kremlin and the Red Square.

Centrally located steps from St. Basil’s Cathedral, Red Square and the Kremlin, Zaryadye Park sits on a historically charged site saturated by Russia’s collective past and evolving aspirations. As a historic palimpsest, the 35-acre site has been populated by a Jewish enclave in the 1800’s, the foundations of a cancelled Stalinist skyscraper, and the Hotel Rossiya—the largest hotel in Europe until its demolition in 2007. For five years, this central piece of Moscow real estate—encompassing a quarter of downtown Moscow— remained fenced as plans to extend its use as a commercial center by Norman Foster were underway. In 2012, the City of Moscow and Chief Architect Sergey Kuznetsov organized a design competition to transform this historically privatized, commercial territory into a public park. An international design consortium led by Diller Scofidio + Renfro (DS+R) with Hargreaves Associates and Citymakers was selected out of ninety submissions representing 27 different countries.

As the first large scale park to be built in Moscow in the last fifty years, Zaryadye provides a public space that resists easy categorization. It is at once park, urban plaza, social space, cultural amenity, and recreational armature. To achieve this simultaneity, natural landscapes are overlaid on top of constructed environments, creating a series of elemental face-offs between the natural and the artificial, urban and rural, interior and exterior. The intertwining of landscape and hardscape creates a ‘Wild Urbanism,” introducing a new offering to compliment Moscow’s historically formal, symmetrical park spaces.

Characteristic elements of the historic district of Kitay-Gorod and the cobblestone paving of Red Square are combined with the lush gardens of the Kremlin to create a new park that is both urban and green. A custom stone paving system knits hardscape and landscape together— generating a blend rather than a border—encouraging visitors to meander freely. Zaryadye Park is the missing link that completes the collection of world-famous monuments and urban districts forming central Moscow.

Traversing between each corner of the park, visitors encounter terraces that recreate and celebrate four diverse, regional landscapes found in Russia: tundra, steppe, forest and wetland. These zones are organized in terraces that descend from northeast to southwest, with each layering over the next to create a total of 14,000 square meters of enclosed, programmed spaces integrated into the landscape: nature and architecture act as one. Visitors can enjoy a river overlook cantilevering 70 meters over Moscow River, media center, nature center, restaurant, market, two amphitheaters and a philharmonic concert hall (scheduled for completion in Spring 2018).

The sectional overlay also facilitates augmented microclimates that seek to extend the typically short park season. These passive climate-control strategies included calibrating the typography of one of the park’s landscaped hills and the amphitheater’s glass crust to leverage the natural buoyancy of warm air. As a result, wind is minimized, plants stay greener longer, and the temperature rises gradually as visitors ascend the slope.

Warmer air is retained during the colder months, while in the summer, motorized glass panels open to expel heat through the roof. These natural zones provide places of gathering, repose and observation, in concert with performance spaces and enclosed cultural pavilions. In addition to these programmed destinations, a series of vista points provide a frame for the cityscape to rediscover it anew. Each visitor’s experience is tailor made for them, by them. 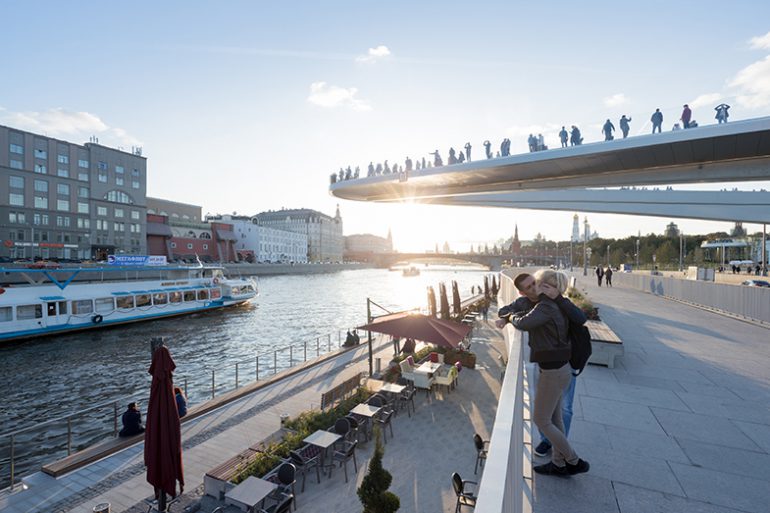 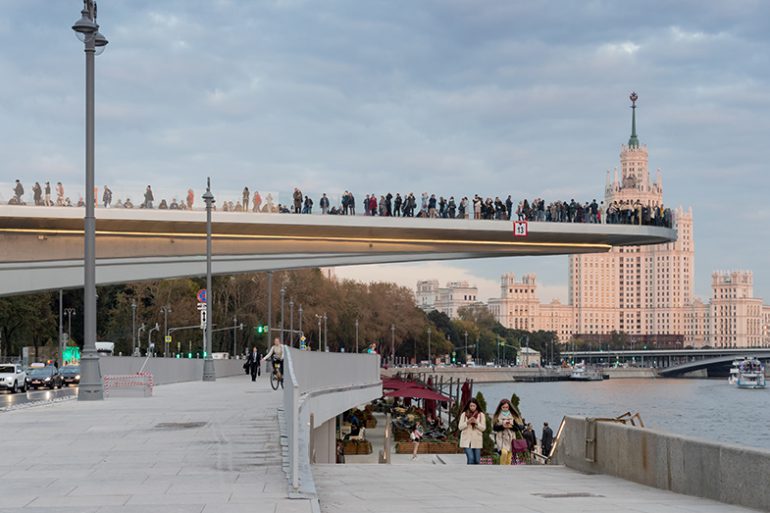 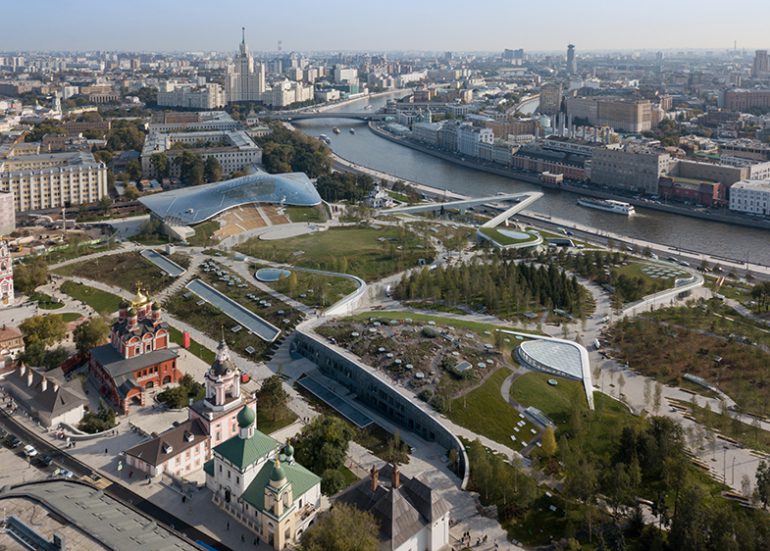 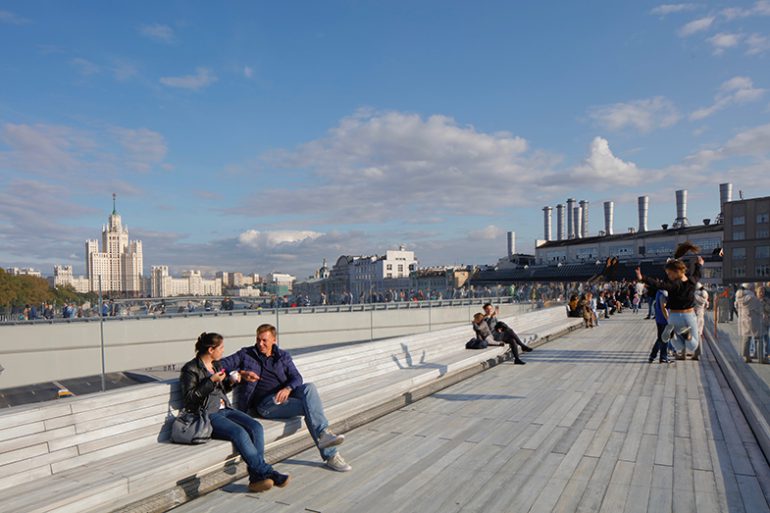 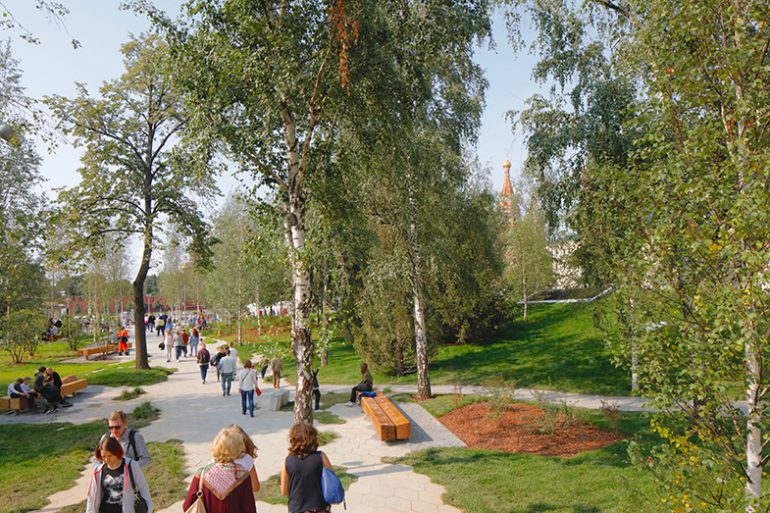 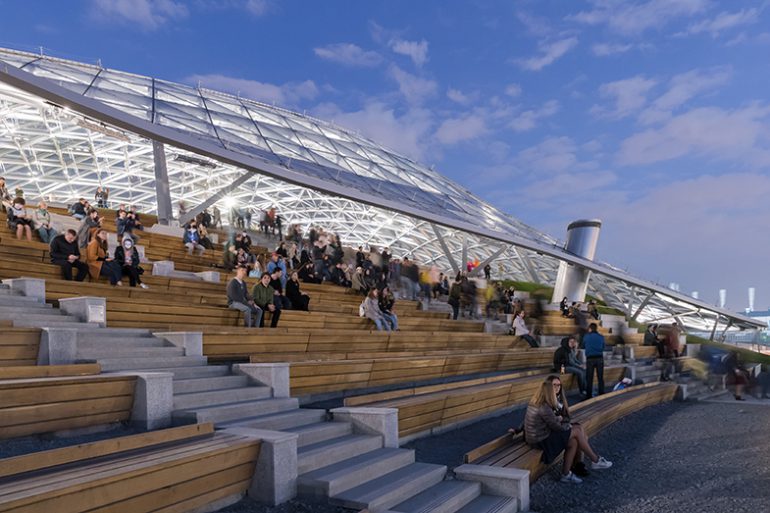 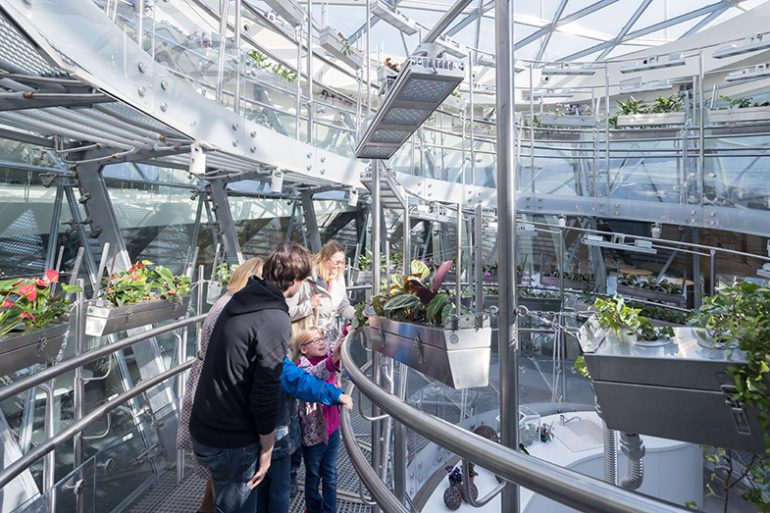 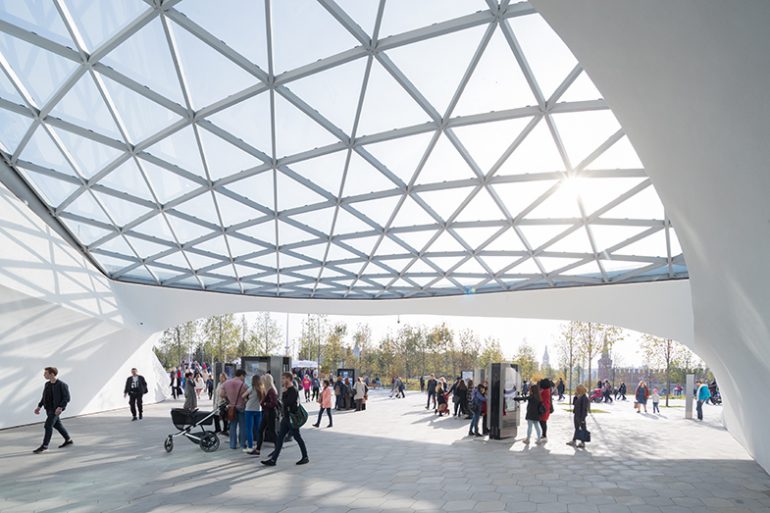 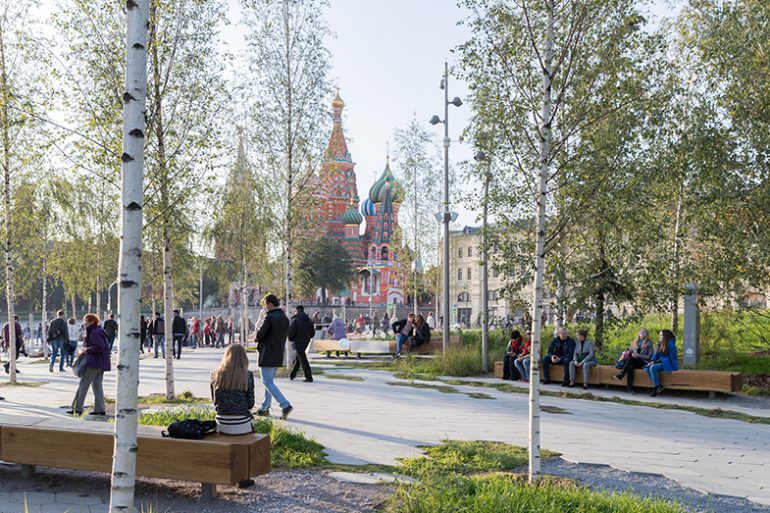 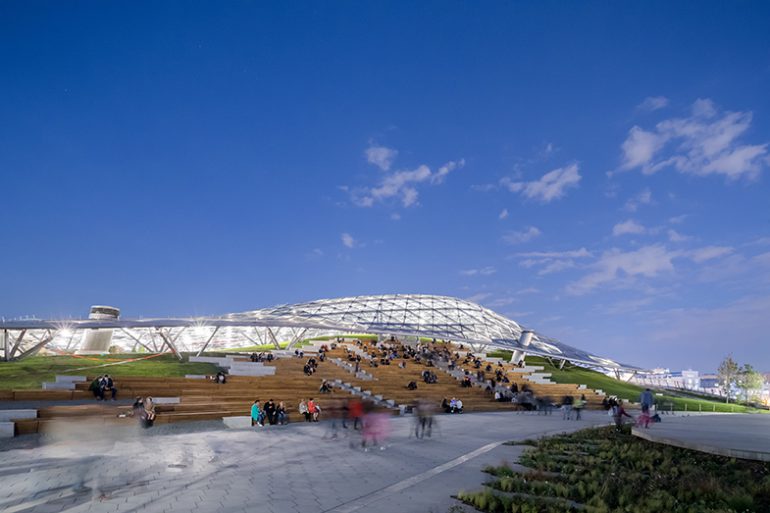