The Eleanor Boathouse by Studio Gang

“What is dynamism in architecture? When is a work defined as “dynamic”? Usually, the architect answers such questions with a type of architecture that interacts with water and it is right at that moment in which he or she finds the solution for the use of a stretch of riverfront thereby improving the health of the community that he or she provides an example of dynamic and above all sustainable architecture.
That was precisely Jeanne Gang – Studio Gang’s main objective during the design and the subsequent creation of the Eleanor Boathouse in the Bridgeport district of Chicago, which is made up of two buildings with a LEED Silver certification and which was open to the public on 4th December 2016.

The space came out of the idea of transforming the river’s north shore, giving it a new look in ecological and infrastructural terms so that it became a “collective” place. The dynamism of this architecture expresses itself fully in the rhythmic shape of the roof which recalls the regular rowing experiences that take place within the community while south-facing clerestory provides the warmth to the inside– home to rowing schools, clubs and organizations – during the colder months. The two buildings, which extend along both the East and West banks of the river, encompass two different collective forms of existence along with the idea of uniting them and allowing them to share with each other; instead to the South the green main façade, as well as providing natural ventilation during the summer, creates a skyline that invites the whole community to come and take part in a wide range of activities.
So, all we have to ask ourselves is if it is solely just the quest for the materials – zinc for the façades – along with the presence of ergonomic machines that make a place quite obviously comfortable, or whether it is so primarily thanks to the idea of being able to relive it, giving it memory and gratitude. Whatever the truth is, it is for sure that the technological and social transformation of an old industrial area is well capable of defining the ‘future’ of a neighbourhood.

BIOGRAPHY
STUDIO GANG IS AN ARCHITECTURE AND URBAN DESIGN PRACTICE BASED IN CHICAGO AND NEW YORK, LED BY AMERICAN ARCHITECT AND MACARTHUR FELLOW JEANNE GANG AND RECOGNIZED INTERNATIONALLY FOR A DESIGN PROCESS THAT FOREGROUNDS THE RELATIONSHIPS BETWEEN INDIVIDUALS, COMMUNITIES, AND ENVIRONMENTS. 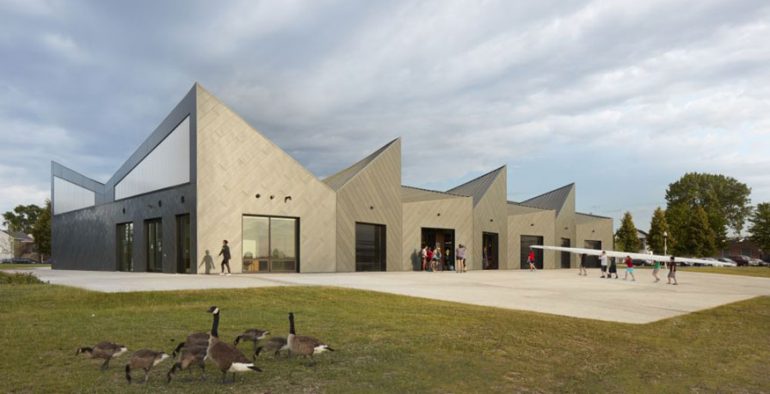