An obsession with quality! Interview with Giulia Molteni 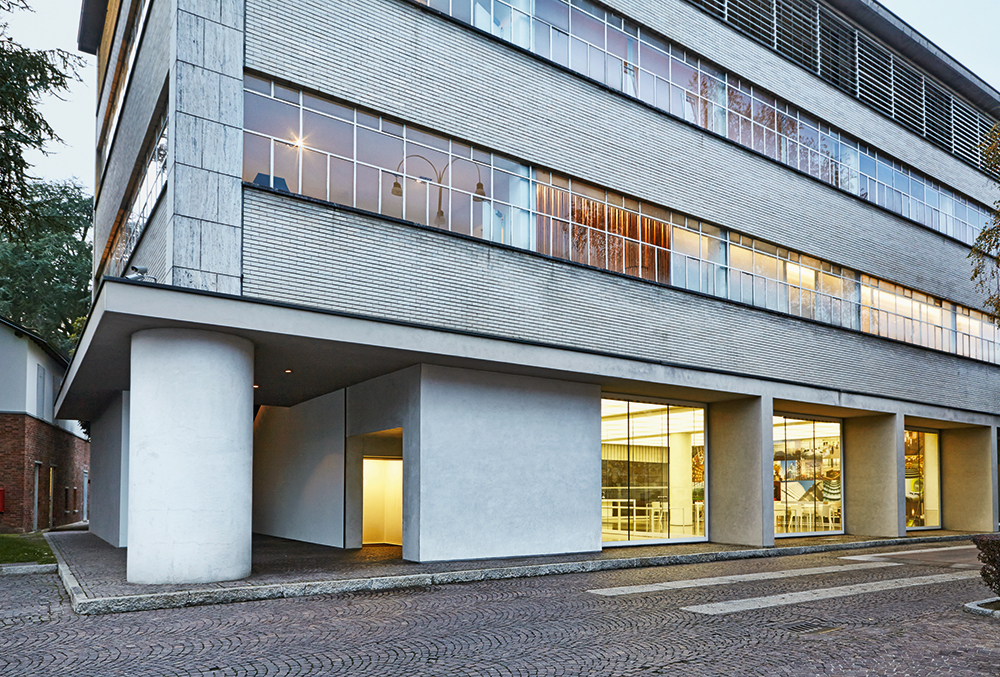 The celebration of 80 years of history and the inauguration of the Museum are important steps for Molteni which represents a “case history” in Italian design.
This is the story of a company closely linked to a family, to its founder Angelo Molteni, his four children Carlo, Piero, Luigi and Mariangela, and his grandchildren who are now the third generation of entrepreneurs.
The story started in 1934 with Angelo, “carpenter” in Giussano and his wife Giuseppina, a modern woman who had already started work after having completed “business studies” at school.
Giulia Molteni, Carlo’s daughter, says that his grandmother was the architect of his grandfather’s fortune, checking the accounts from the sidelines.
She was more sophisticated, while he was certainly enterprising and between them they started on this great adventure. The catalogue of the “80!” exhibition shows them together in 1941 in front of the factory gates.
“This history is also closely linked to the workforce and to industries spread around the area” Giulia continues“and despite our father’s initial resistance, the decision to establish a Museum is also a tribute to the shared work put in by a lot of people. Now he’s proud of this decision, but we had to struggle with his traditional reservations: he’s the king of understatement. We were brought up surrounded by prototypes, by interesting people and the beauty of homes designed by architects such as Afra and Tobia Scarpa, but we were also used to keeping our feet on the ground and the constant warning not to get too big for our boots, yet a tribute to the founder of the company and the route he followed was in order so we decided to entrust Jasper Morrison with organizing the display and selecting the pieces for the museum so as to have a more independent and outside approach.”
The Museum is located in the space that was once used for drying veneers on the top floor of the company’s historical building in Giussano, renovated by Luca Meda and Aldo Rossi.
Behind the building that houses the museum there are more than 160,000 metres of production area.
When you visit it you walk a lot, through tidy departments and quiet people concentrating on their work. Here the goal of quality seems to have been transmitted to workers and production lines. The factory has been designed in detail to express performance. The obsession with quality has become the house rule.
“Our company is based on substance, it has followed an old school industrial model which has first and foremost always given precedence to well-made products. Regardless of trends, the image of the “Molteni Home” has been consistently created over time as a reliable haven for harmony. We’ve tried to keep focused on the quality of Made in Italy by developing a value system around this goal that is congenial to us as Italians: that of a safe place and the family.

The houses that we imagine for “living in” with our products are real houses, inhabited. This starting point has always triggered the quest for technical innovation starting with functionality. We continuously invest in research: in the organization of production, product knowledge and communication”.
The journey started in the 1930s when the company was engaged in production for third parties. In the early postwar period Molteni was already a significant producer, but industrial scale growth came with the introduction of wood processing machinery imported from Germany in the 1950s along with a vocation for mass production.
This production grew significantly but remained in the field of “style” furniture even though the prototypes of modern furniture were created thanks to Werner Blaser, Yasuhiko Itho, Donato D’Urbino and Giancarlo De Carli.
In 1961 Angelo Molteni was among the 14 founders of the first Salone del Mobile with Cassina, Montina and Gavina but it wasn’t until the legendary ‘68 that “style” production was abandoned in favour of the new modularity introduced by designers like Tito Agnoli and Angelo Mangiarotti.
This watershed was represented by “Iris”, an original 1968 design by Luca Meda which opened a new chapter in Molteni’s history and ushered in a working relationship marked by friendship and generosity. Through Meda a partnership with Aldo Rossi was established and the results were distinguished by an elegant production style which continued for more than two decades. This included timeless products such as the “505” container from 1972, the “Teatro” chair in 1982, the “Milan” chair in 1987, the “7 times 7” programme in 1988 and the “Piroscafo” system in 1991. At the same time Unifor developed in the contract sector along with development of the brand’s internationalization process which had started in 1975 with supply of the “Modulo 3” design to IBM. The kitchen sector brand Dada (bought from Garavaglia) expanded, as happened with Citterio in the wall and divider sector, in partnership since 1969 and acquired in 2014.
“The sequence of acquisitions came about as a result of Angelo’s wish to allocate a company to each child, thus there are four companies at the heart of the group: Molteni, Unifor, Dada and Citterio to which Vitra and Artek distribution for Italy and Australia should be added. Development has been entrusted to children and grandchildren with specific tasks and roles for each. The group produces a turnover of €250m with more than 800 employees.”

Giulia Molteni also talks about the latest challenges: the creation of an upholstery sector starting in 2004, growth abroad for Molteni in the domestic sector as had happened with Unifor years earlier in the office sector and the opening up of management. “The entry of our generation into the company took place at a difficult time, coinciding with the economic crisis, but my brothers and I have refused to throw in the towel.”
“My brother Giovanni deals with products and production, I take care of marketing and communications. Our task is to open up to change by extending and expanding our experiences outside the company and abroad. The market is mature and increasingly appreciates Italian taste and style. In the wake of this awareness and through the cultivation of partnerships with designers such as Jean Nouvel, Foster+Partners, Hannes Wettstein, Patricia Urquiola, Ron Gilad and Vincent Vam Duysem we can make inroads into foreign markets. We have recently opened direct sales branded outlets in London, New York and Tokyo after the one in Paris in 1979 increased communication. Production is growing by 30% and our reliability in the contract sector is also expanding. Our father is always here, looking at products and we enjoy a constructive dialogue.”
Carlo Molteni joins us and listens for a bit, agrees to pose for a photo and then hurries off, clearly busy. The products and his factory demand his attention. The obsession with quality does not allow him to get distracted for too long. 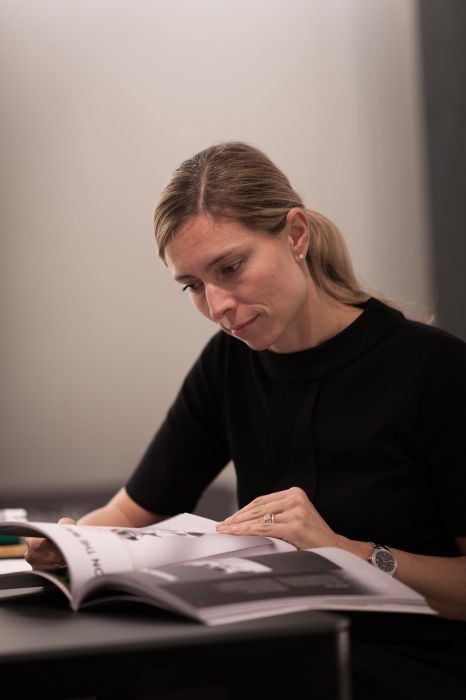 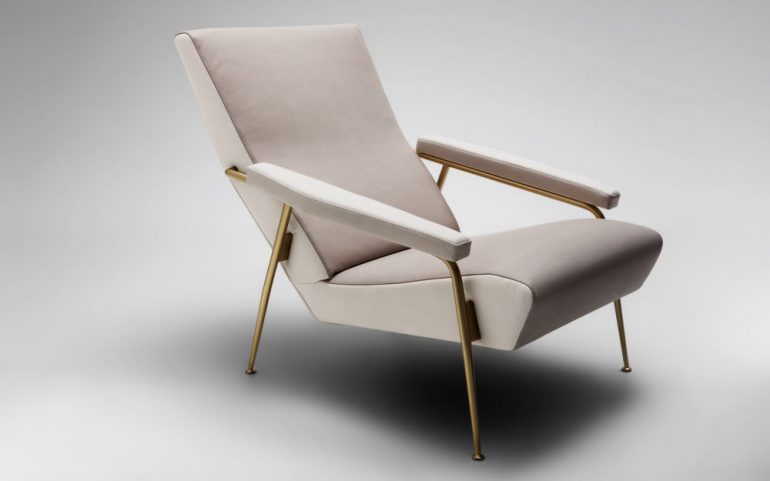 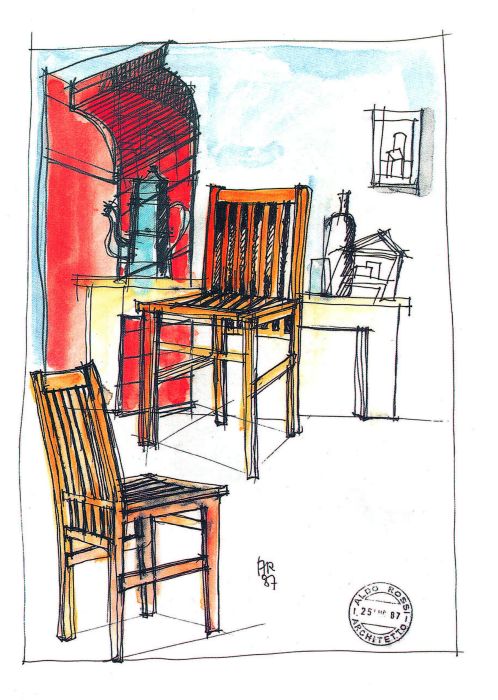 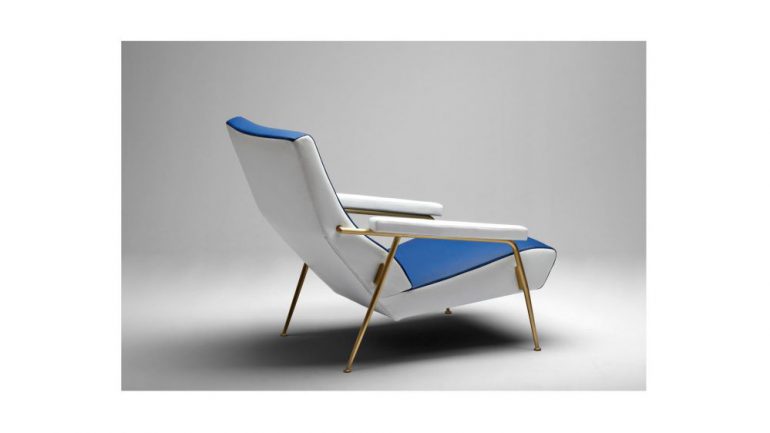 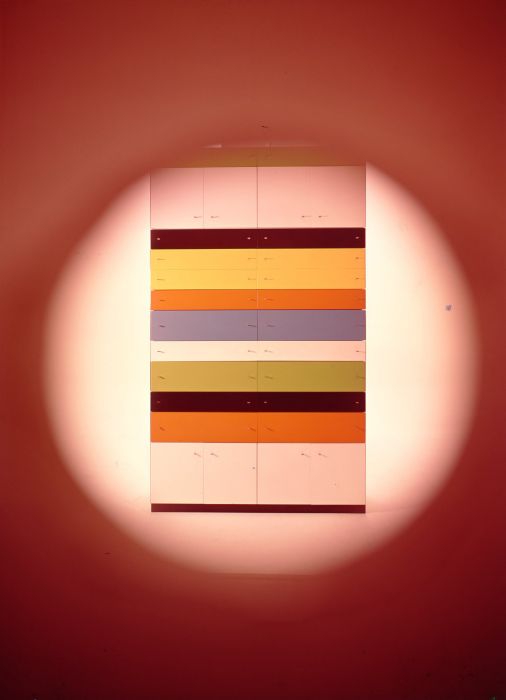 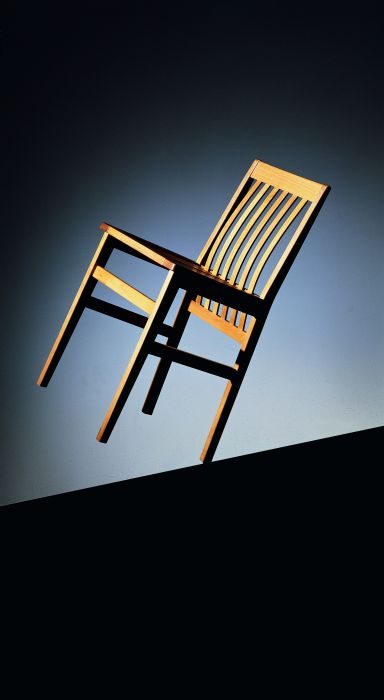 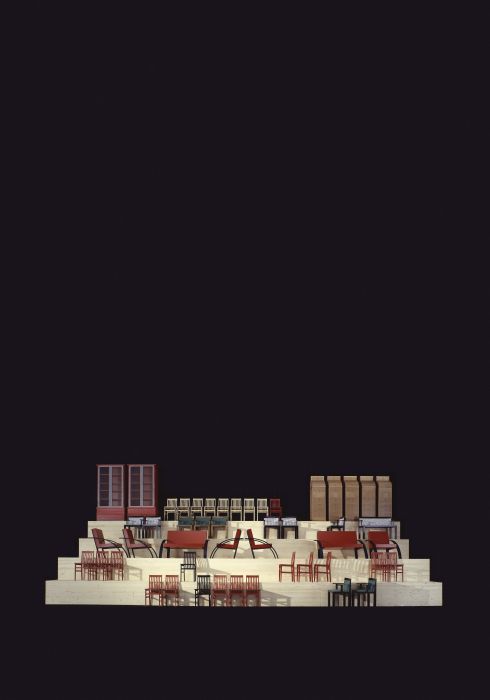 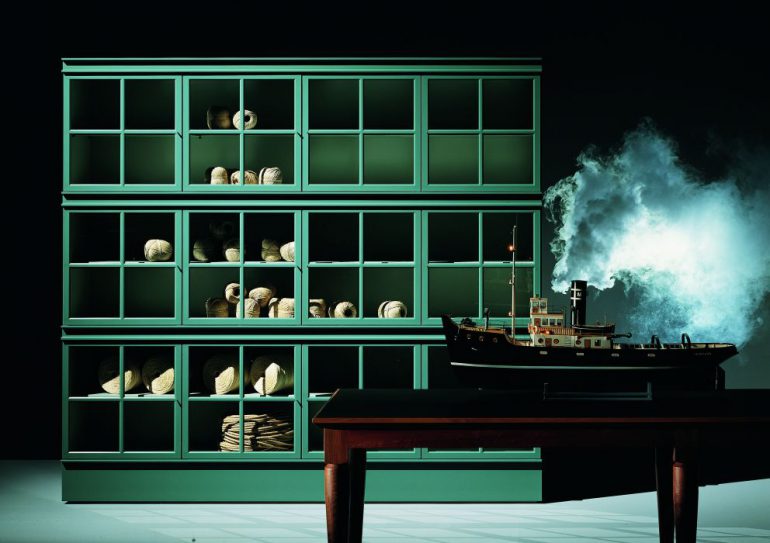 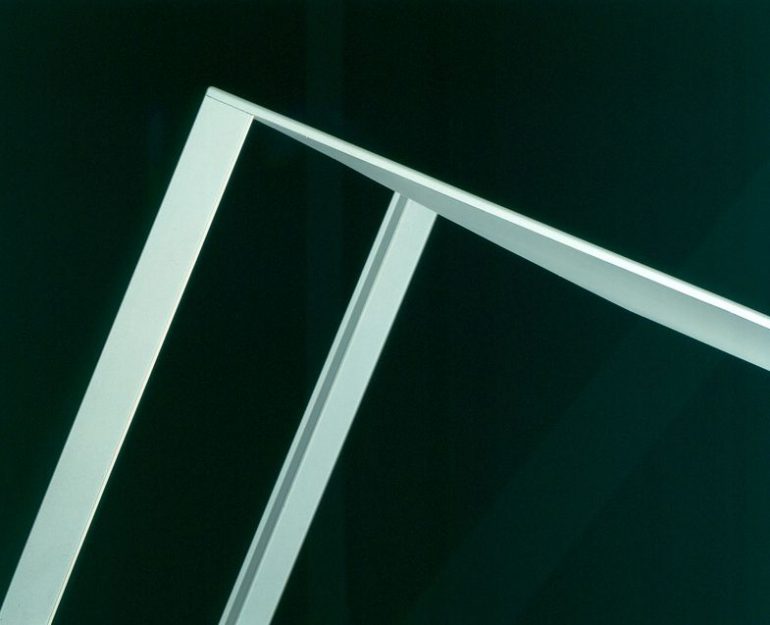 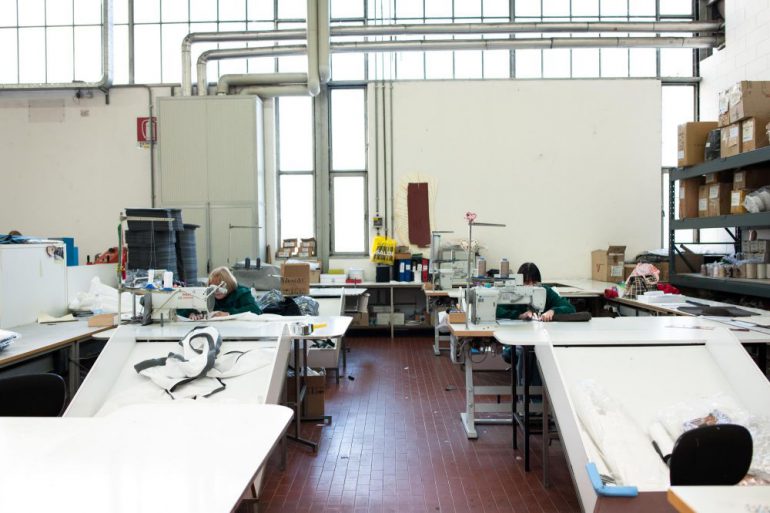 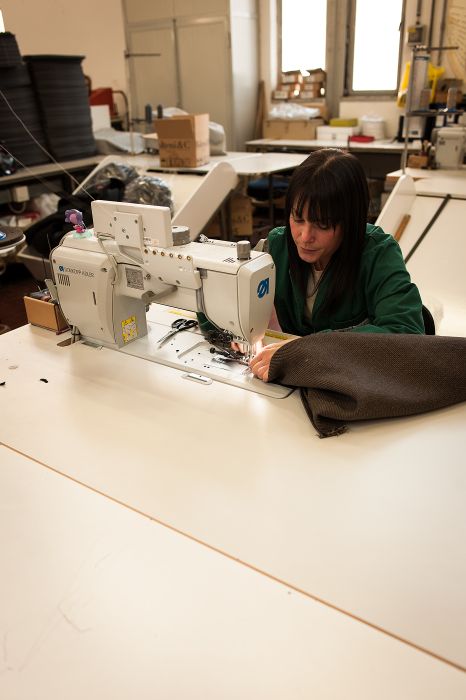 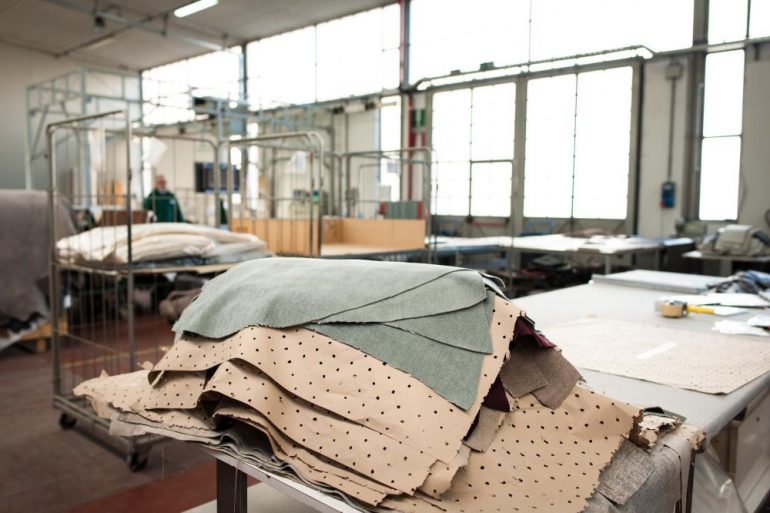 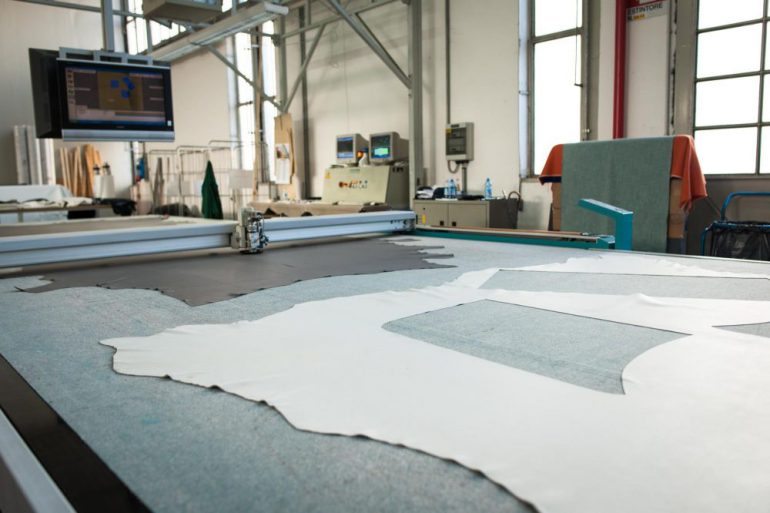 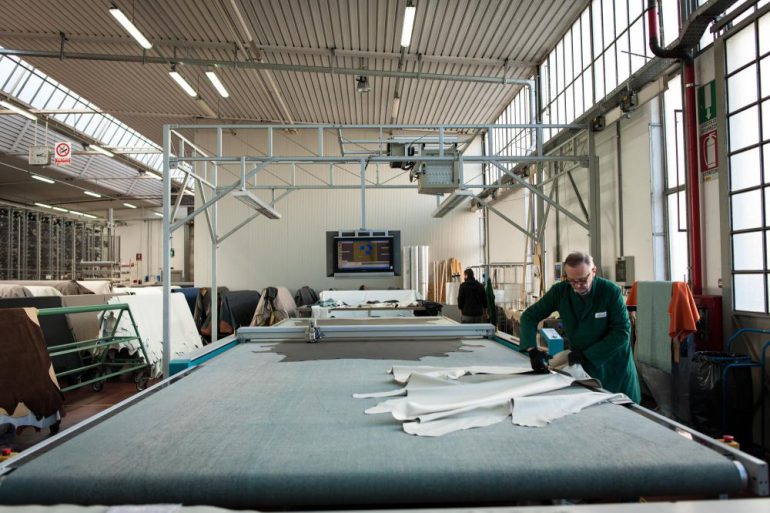