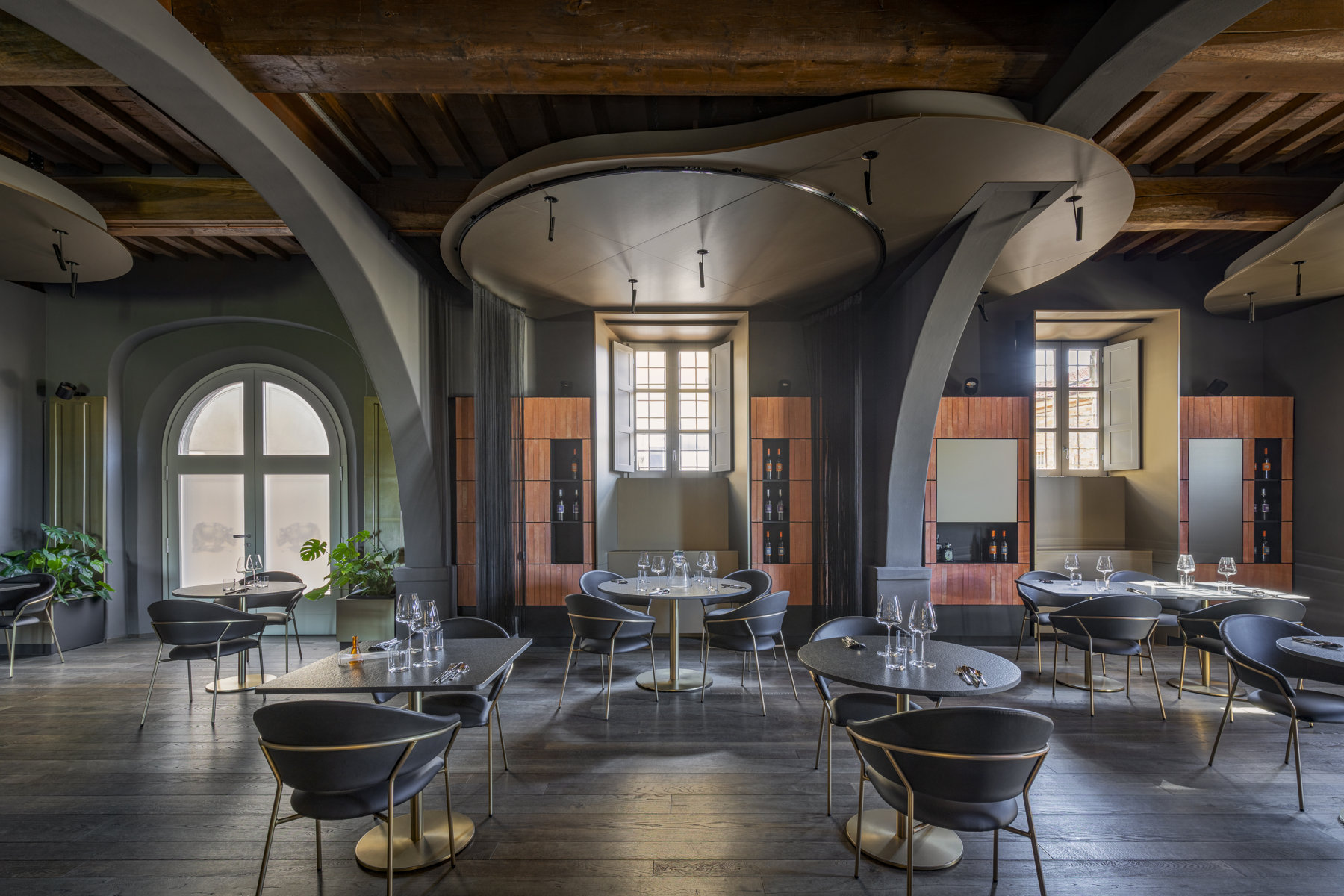 lamatilde – a Turin-based interior design studio – reconfirms its collaboration with Cinzia and Antonino Cannavacciuolo: after LAQUA Countryside in Ticciano and the restyling of Relais Villa Crespi on Lake Orta, the studio designs the new LAQUA Vineyard, the fourth Resort of the LAQUA collection, in the small village of Casanova, between Pisa and Volterra.

The LAQUA Vineyard project translates the Cannavacciuolo Group’s passion for hospitality into a new and welcoming Resort in the heart of Tuscany, overlooking the spectacular panorama of local vineyards, within a hamlet that originally housed a theater.
A careful renovation and search for the perfect dialogue between ancient and contemporary, results in the creation of the Cannavacciuolo Vineyard Restaurant, recently awarded 1 Michelin Star, within the Resort and the restyling of the 6 apartments that evoke a concept of ‘home’.
The project is meant to be a tribute to the never-ending love story between cuisine and wine. In fact, the visual identity conceived by the studio recalls this association and the protagonists of the place – the Rhinoceros of La Spinetta Winery, and the Moon, borrowed from the golden buttons of the Cannavacciuolo brand.

In the same structure where the restaurant is located are 6 apartments, all different but characterized by pure lines and intimate, cozy atmospheres. Each room thus takes on a name of its own, inspired by mythological love stories: Cupid, Aphrodite, Narcissus, Eurydice, Dionysus, Penelope. lamatilde worked on the pre-existing rooms with graphics, colors and decorative objects consistent with the concept.

The design approach chosen by the studio for the realization of Cannavacciuolo Vineyard Restaurant involves a continuous interplay between contemporary elements and tradition, which is not hidden or overpowered but highlighted and enhanced.
The walls, which were originally characterized by an irregular pattern, are made linear by the insertion of furnishings and counter walls, thus balancing the visual impact of the spatial scanning.
The same approach is adopted in the design of the ceilings, where both the regularity of the arches and the classical and strongly characterizing personality of the restored ceilings are harmonized by the insertion of claddings with soft and fluid forms, which entertain a delicate relationship of veiling/unveiling of the traditional ceilings, enhancing each other in contrast.

For the ceiling coverings, lamatilde opted for golden shades that serve the function of reflecting and diffusing the outside light, giving the Restaurant’s atmosphere a warmer and more scenic connotation.
The original building, in fact, because of its theatrical connotation provided very dark settings. In addition, the only pre-existing window that allows the view of the spectacular panorama of the surrounding vineyards and countryside is highlighted by the corridor characterized by an accelerated perspective that amplifies the visual convergence towards the outside, giving more depth to the environment.
All of the set-up elements echo the theatrical environment in a recognizable way. In particular, the two counters, placed at opposite ends of the main hall, recall two stages, one dedicated to culinary art and the other to wine: two visual fires that mark the first coordinates of “stage” space for customers and guests.
For more information visit www.matilde.it. 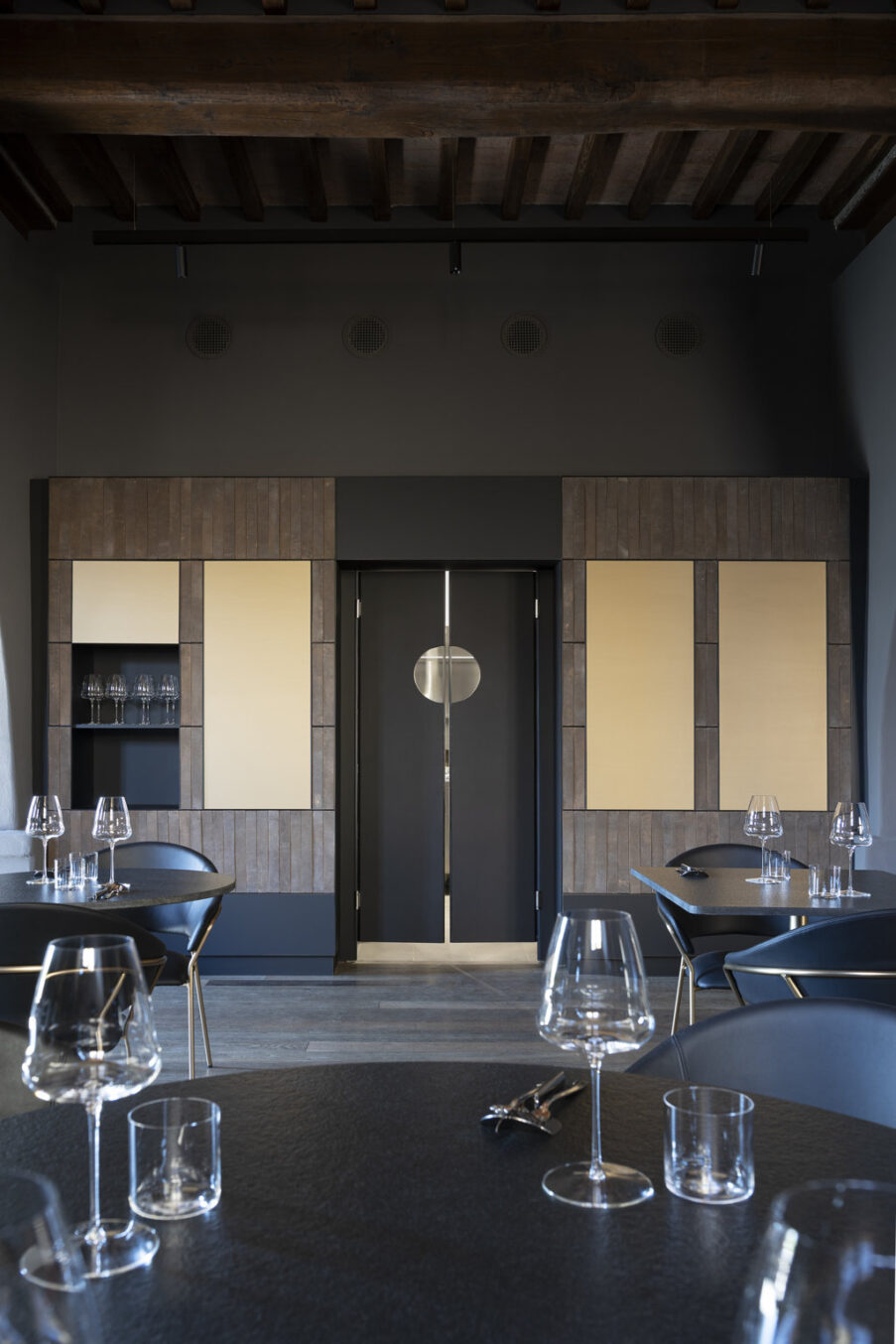 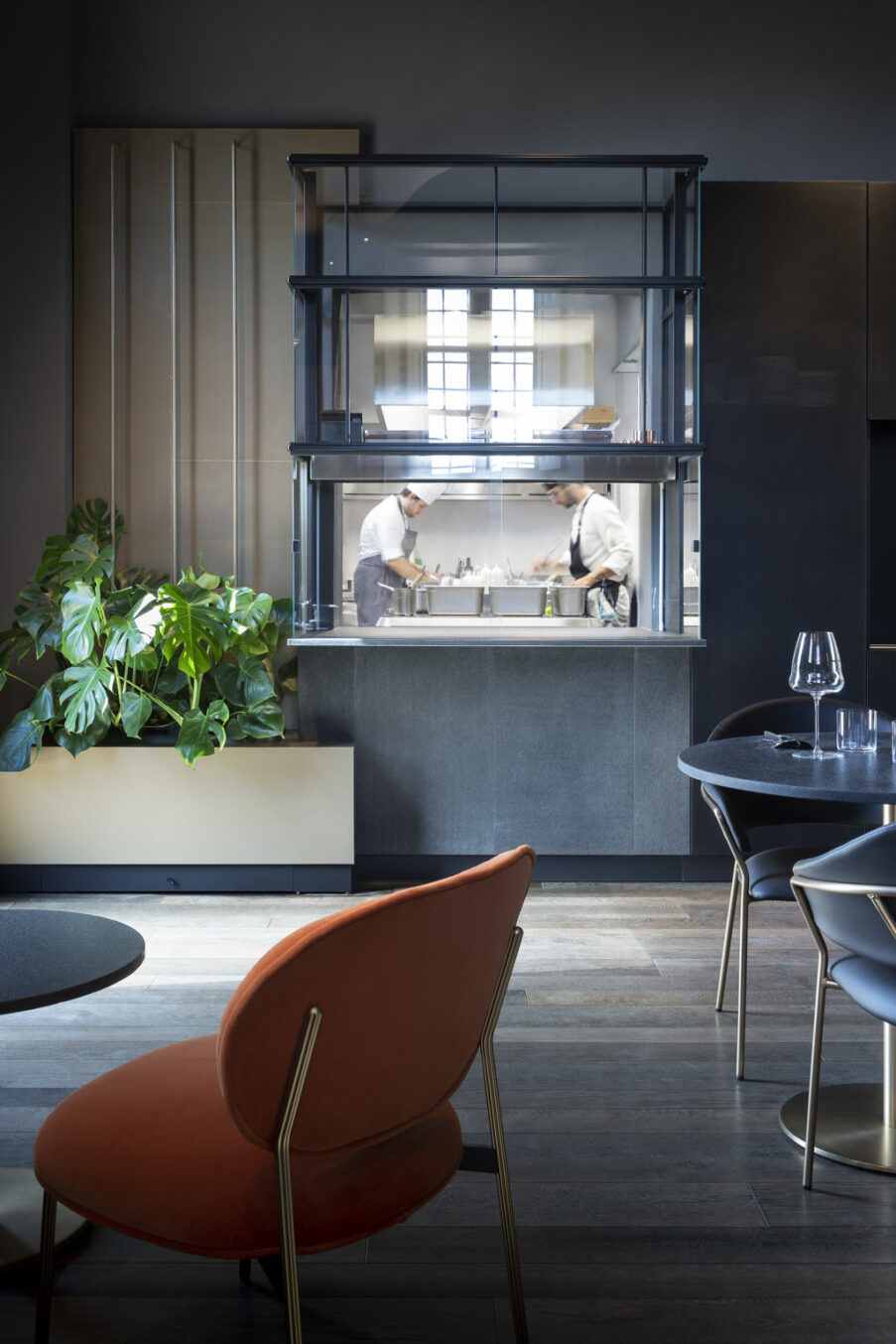 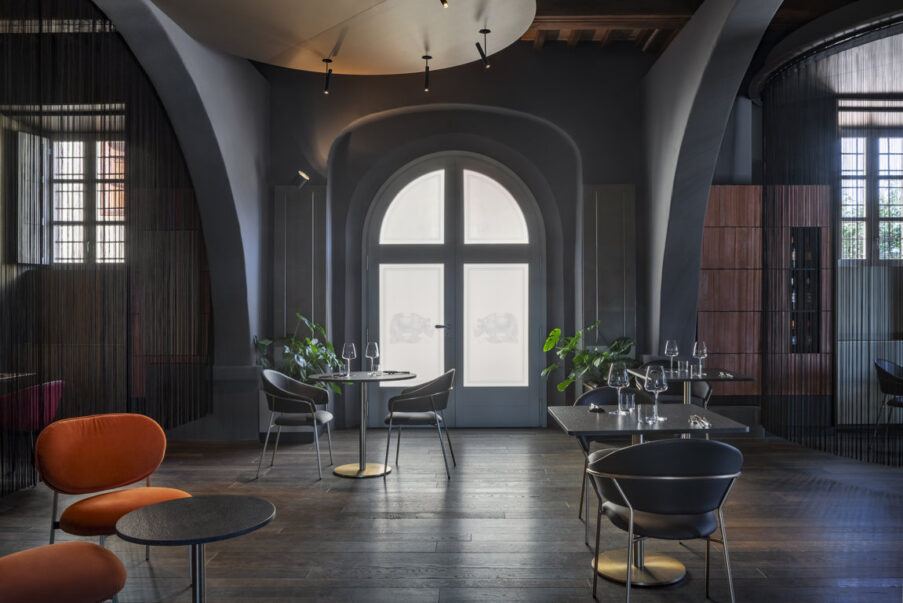 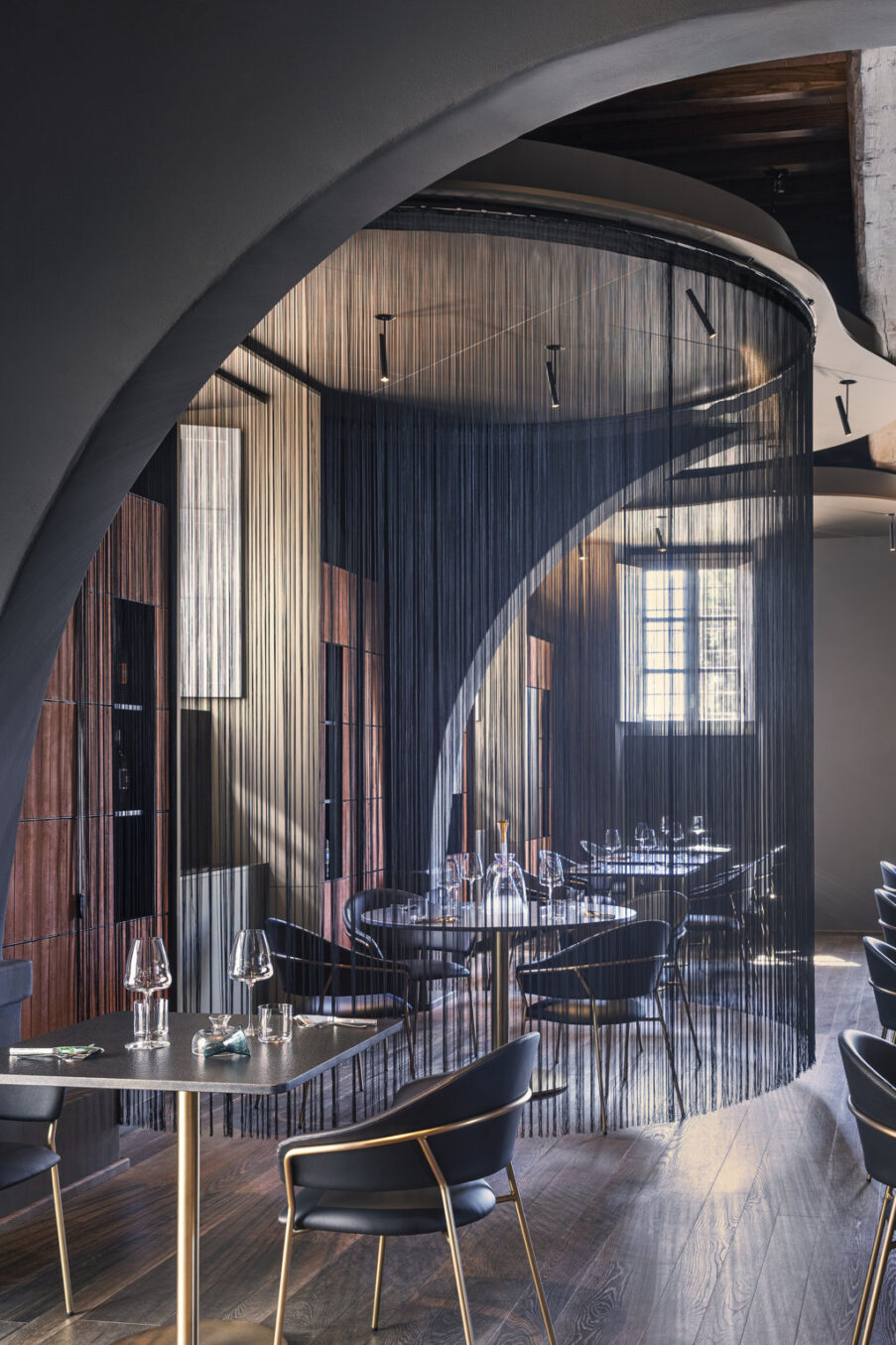 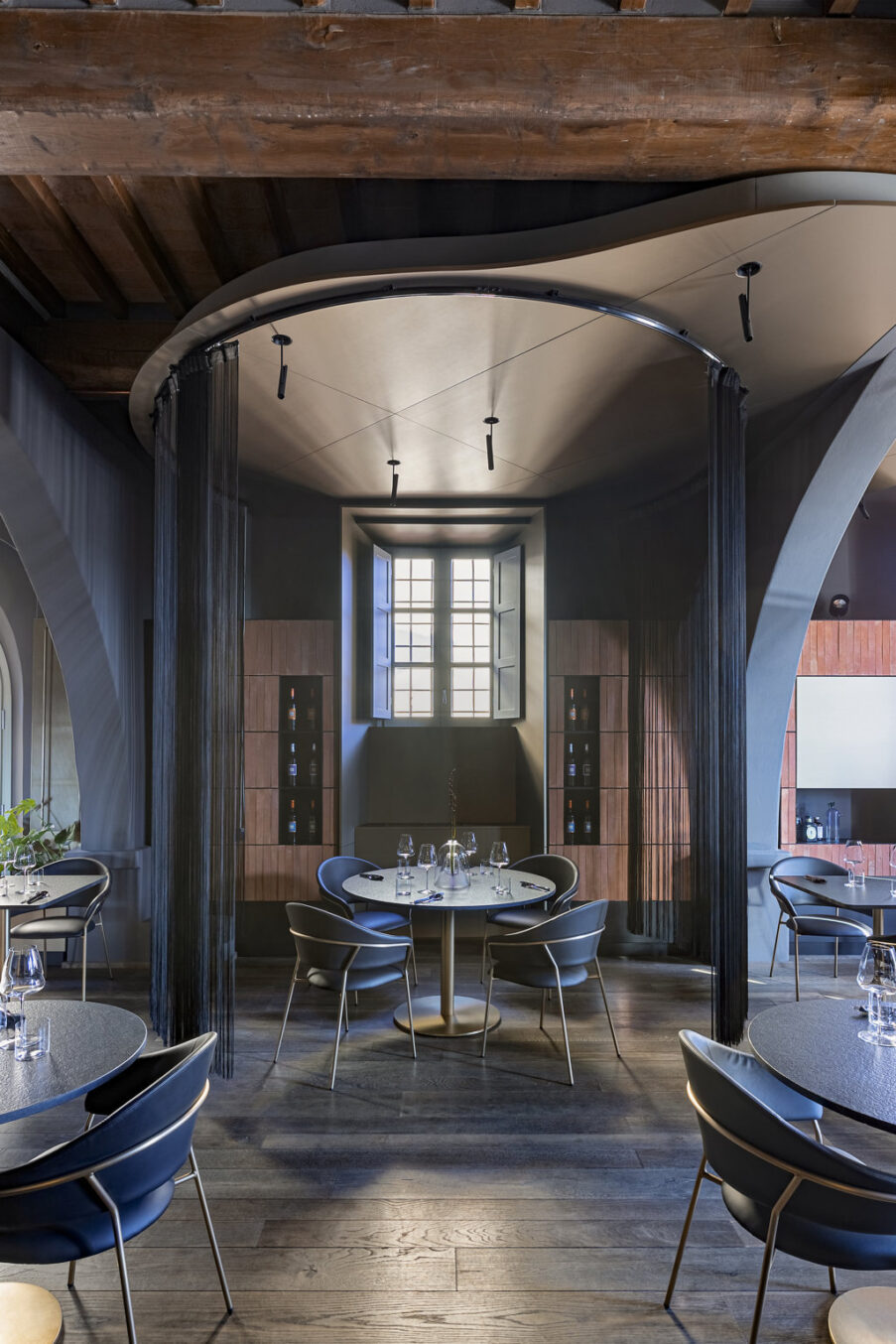 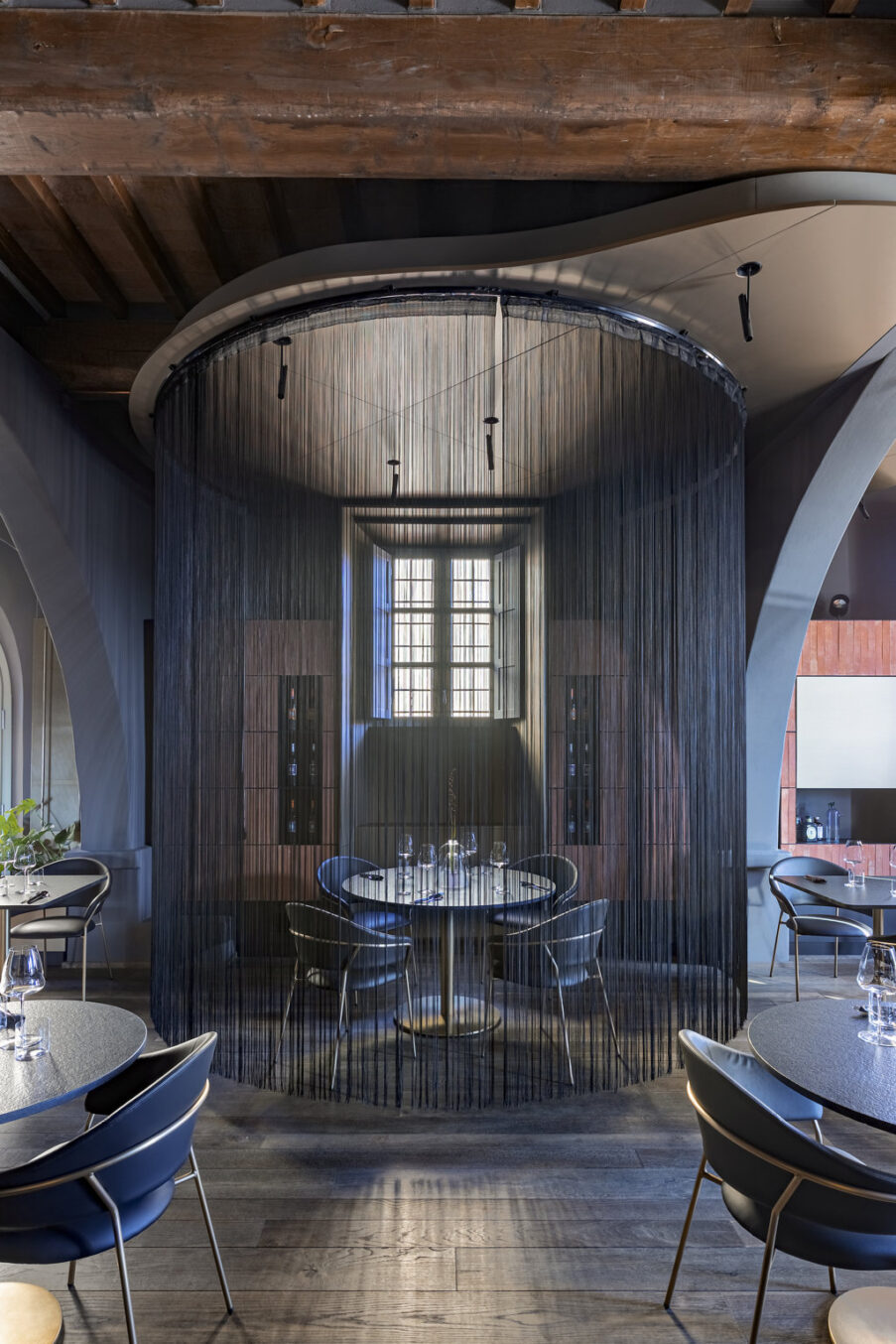 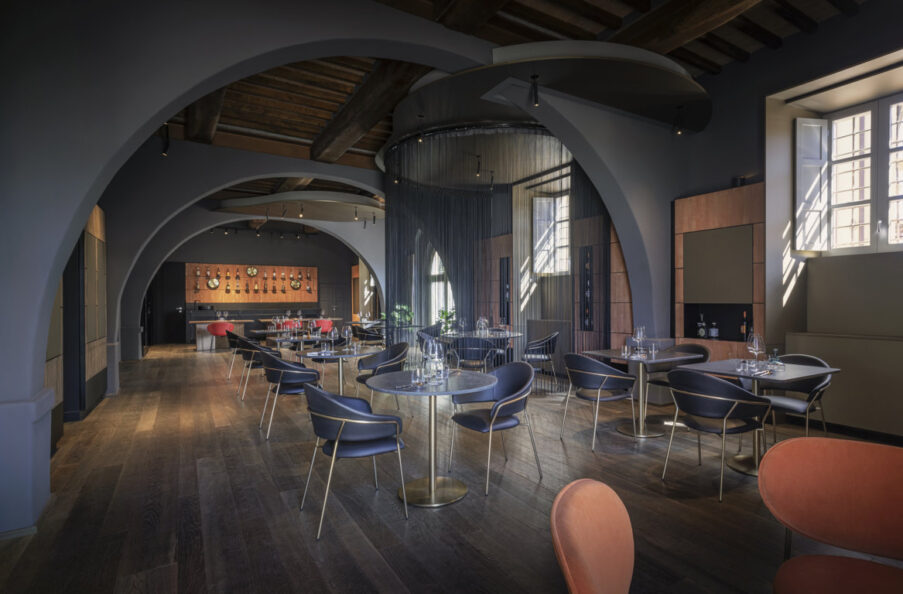 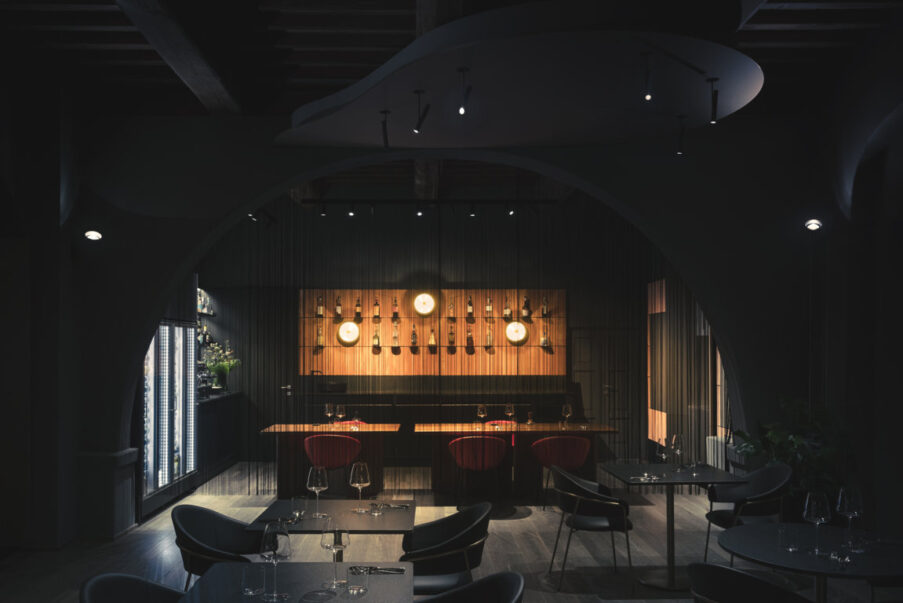 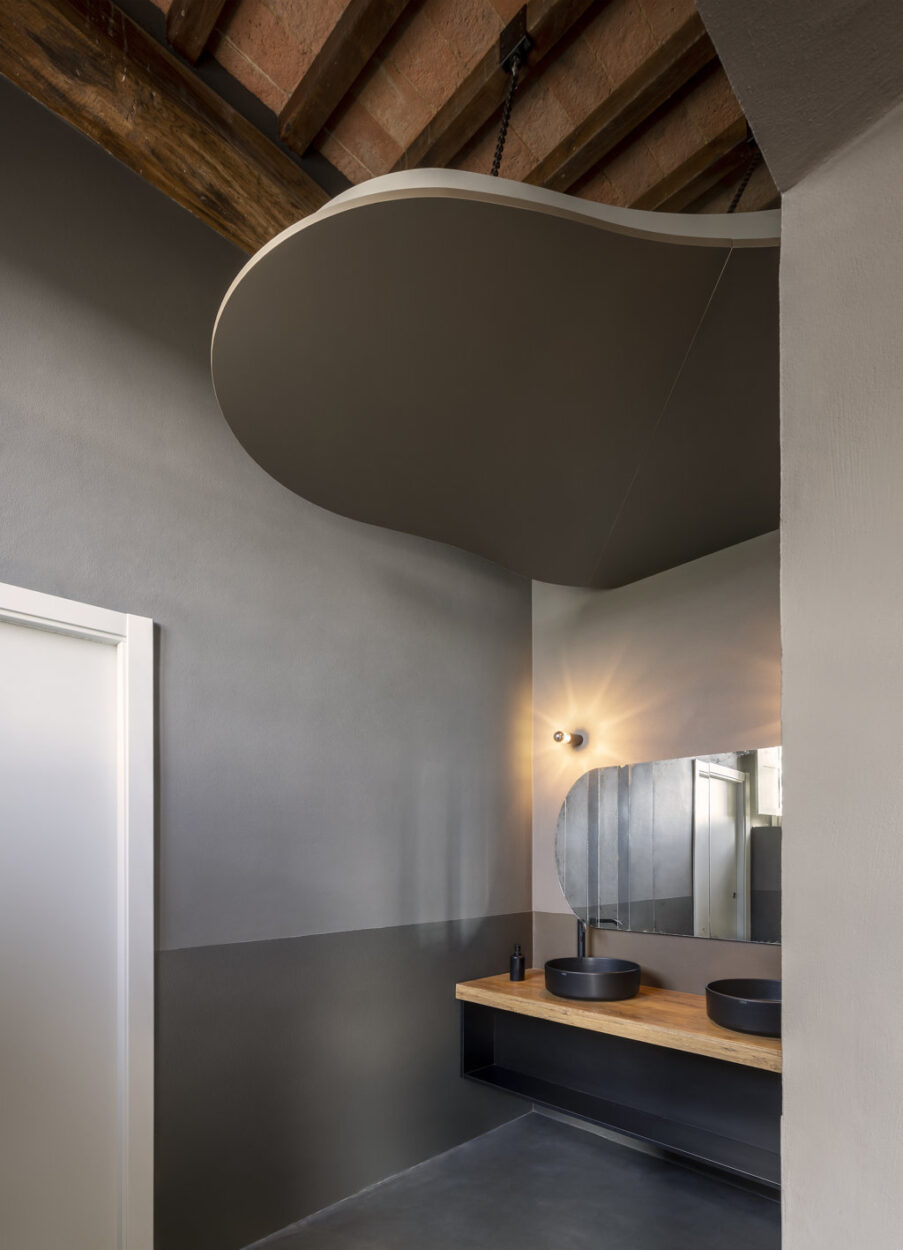 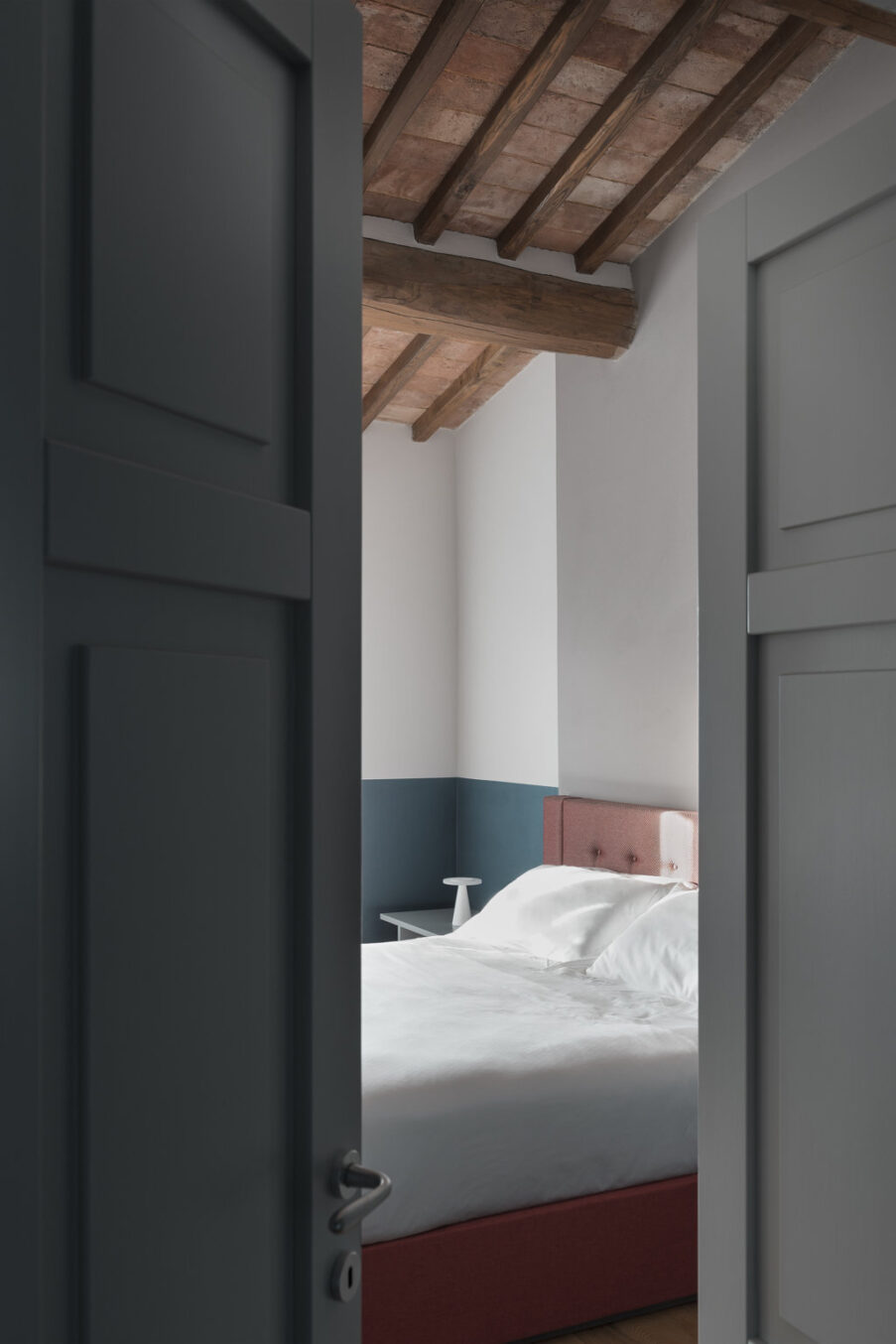