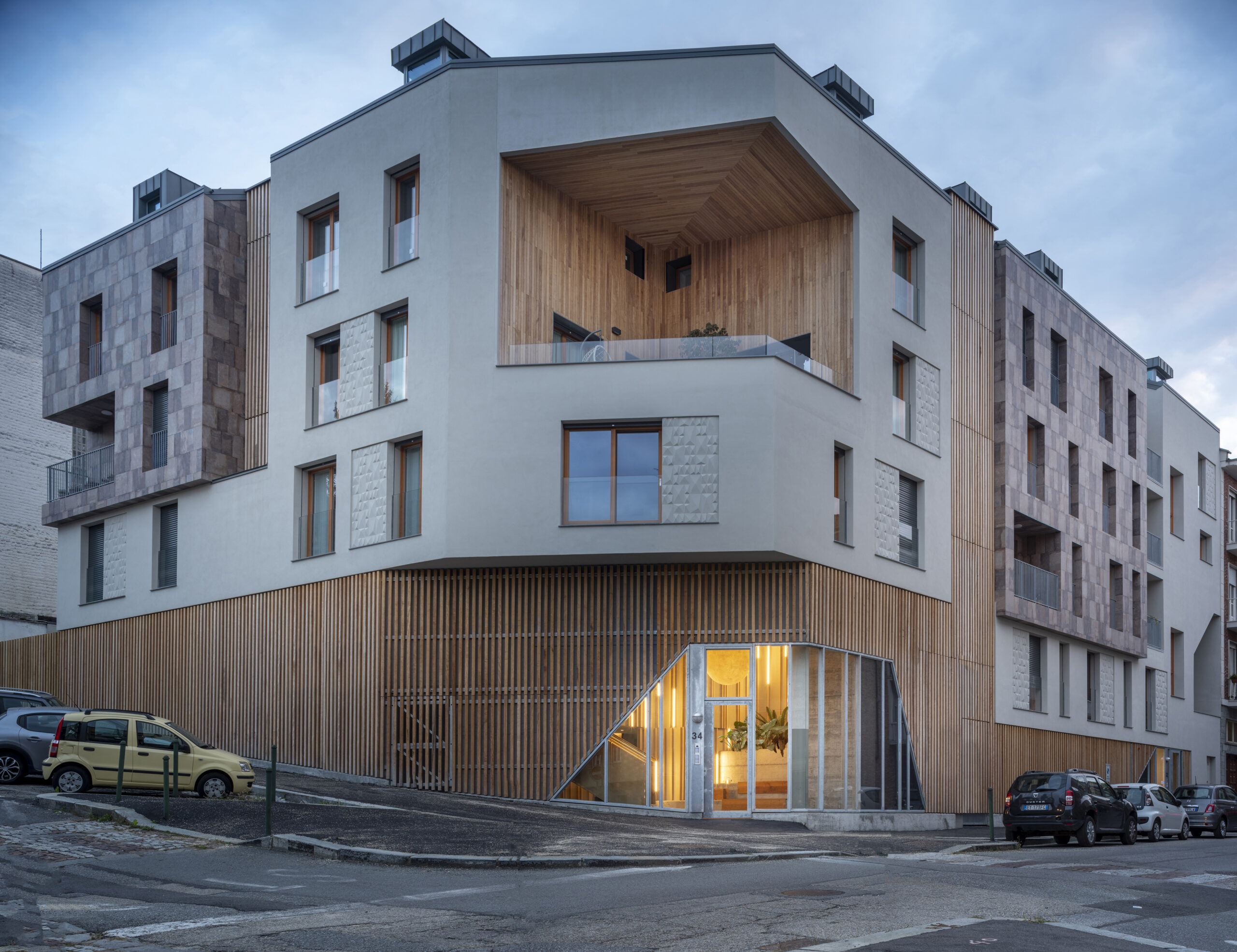 House on stilts in Turin

A series of single-family homes are lined up on the slope of a hill, bringing the atmosphere of San Francisco’s grand boulevards to Turin as well. +Studio Architetti | Filippo Orlando with Mediapolis Engineering has just completed the transformation of a corner lot, formerly used as a car park, into a new residential complex, with an unusual language for Piedmont’s capital city, alternating exposed concrete, steel, raw wood strips and glass. Preserving the two underground levels of the existing garage, the project reconstructs the missing piece in the building curtain. Articulated in a corner volume of four above-ground storeys with a pitched roof and dormer windows, the new building, with its alternation of materials and full and empty spaces, looks to the deconstructivist architecture of the west-coast. The basement is a reinterpretation of the surrounding buildings of the 1950s, in which the building was often raised off the ground by a pilotis floor: the flats are therefore “suspended”, resting on and fitting into the wooden slats of the light, transparent basement.

The project thus outlines a house “on stilts” with a simple, luminous design which, with a skilful play of staggered levels, adapts to the slope of the hillside. The corner lot is characterised by two distinct façades. The urban façade, facing north and west, is hybrid and vertically marked by different elements. The edges of the plot and the central corner block are reminiscent of the pre-hill urban fabric, characterised by detached houses. These volumes are covered with rough plaster and play with the staggered openings and the alternation of full and empty spaces obtained by subtraction, culminating in the corner loggia on two levels. The protruding bow-windowed volumes, on the other hand, dialogue with the elegant 1950s residential architecture of the context, in the scanning of the terraces enclosed by metal rod railings and in the use of porcelain stoneware modulated in shades of purple red.

The entrance on the corner is marked by a clear cut in the wooden planking that opens onto a double-height hall, a scenographic chronotope that through a series of oculi leads to the common areas and the inner garden.  The façade facing the courtyard, facing south and east, is an enfilade of large continuous balconies with a regular pattern in galvanised steel and cement slabs. Conceived as a true extension of the interior space, they open onto the green hillside and the new interior garden, forming the backdrop to the balconies. The courtyard is designed as a communal space, containing functions for collective use: a garden, seating and a children’s play area. The Via Lomellina project renews the urban imaginary by proposing a new way of living with large common living spaces, which has won over a heterogeneous group of families in search of a new sense of community. 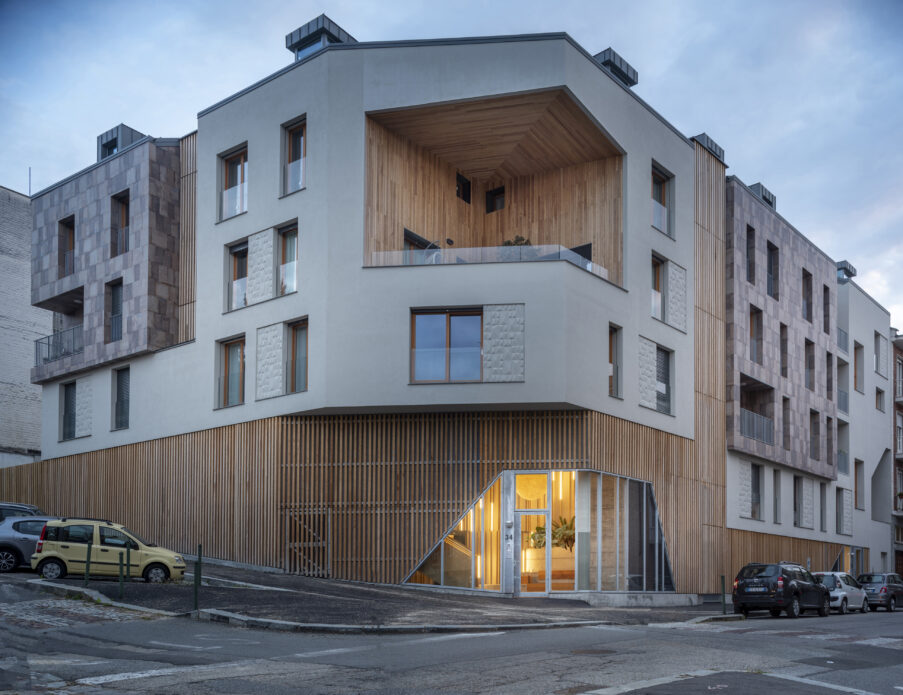 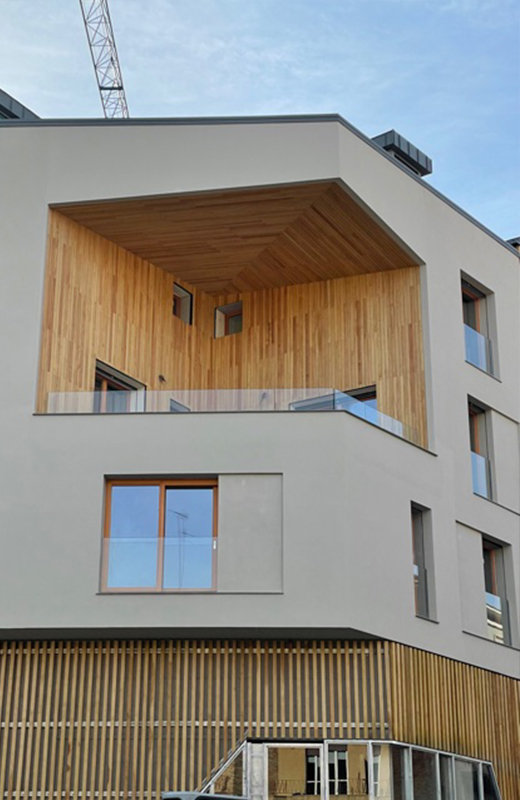 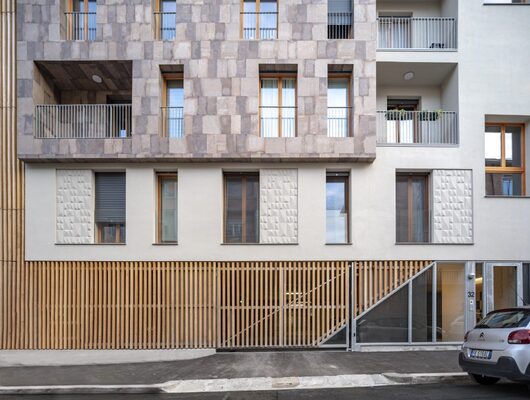 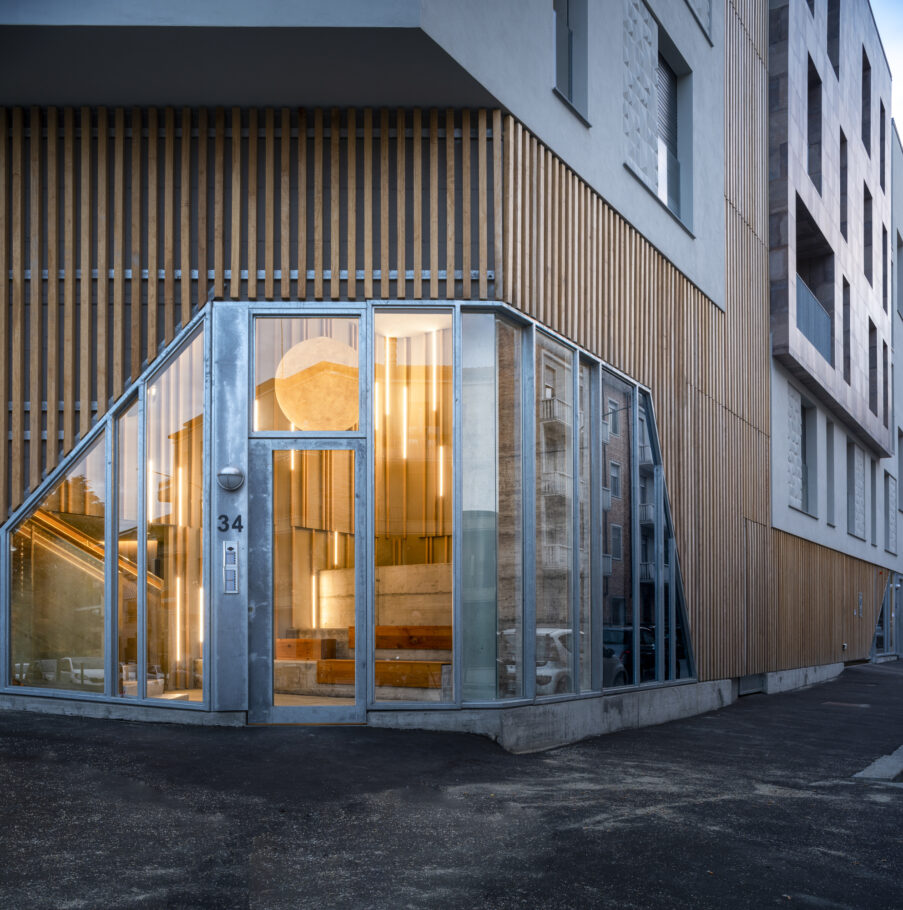 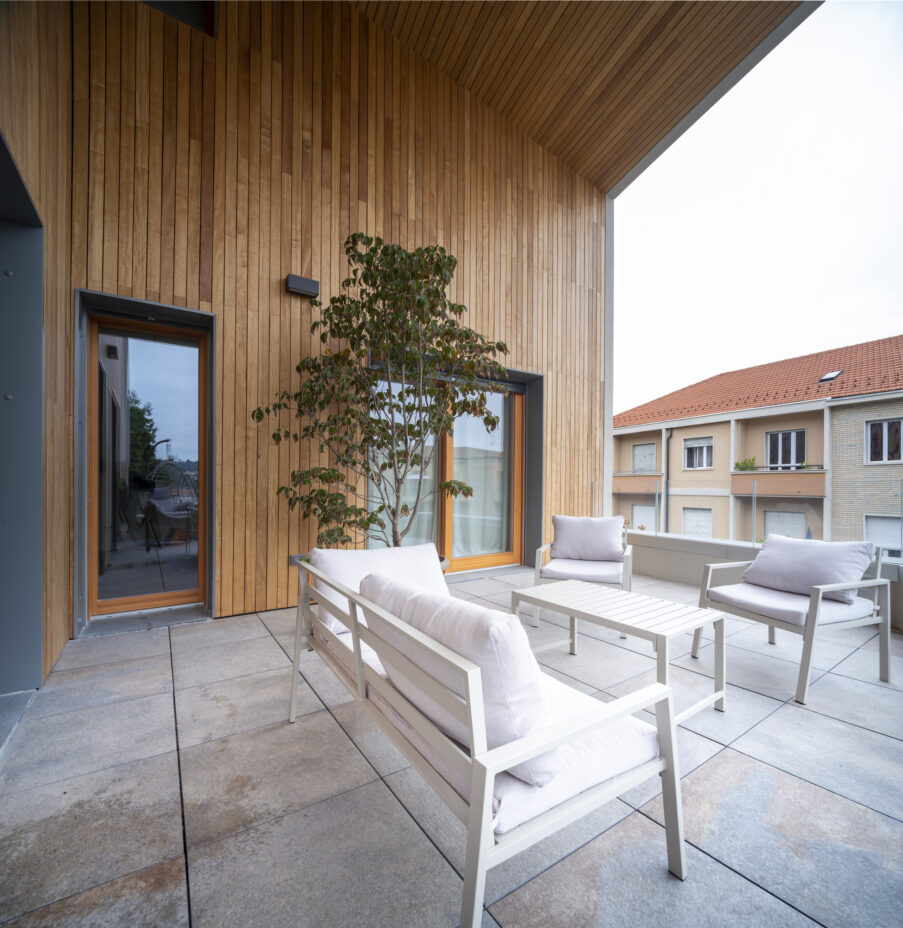 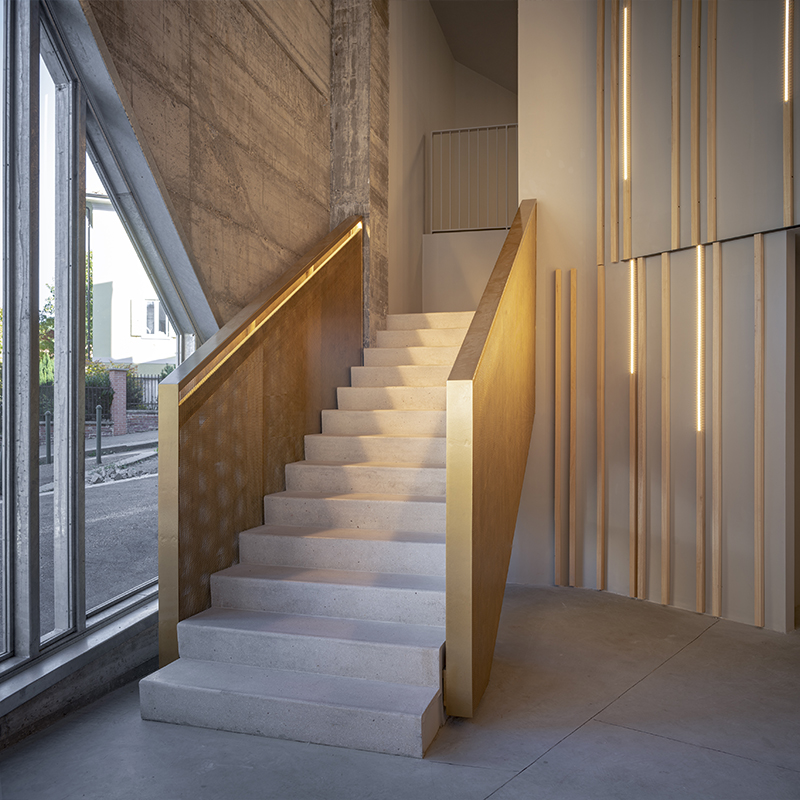 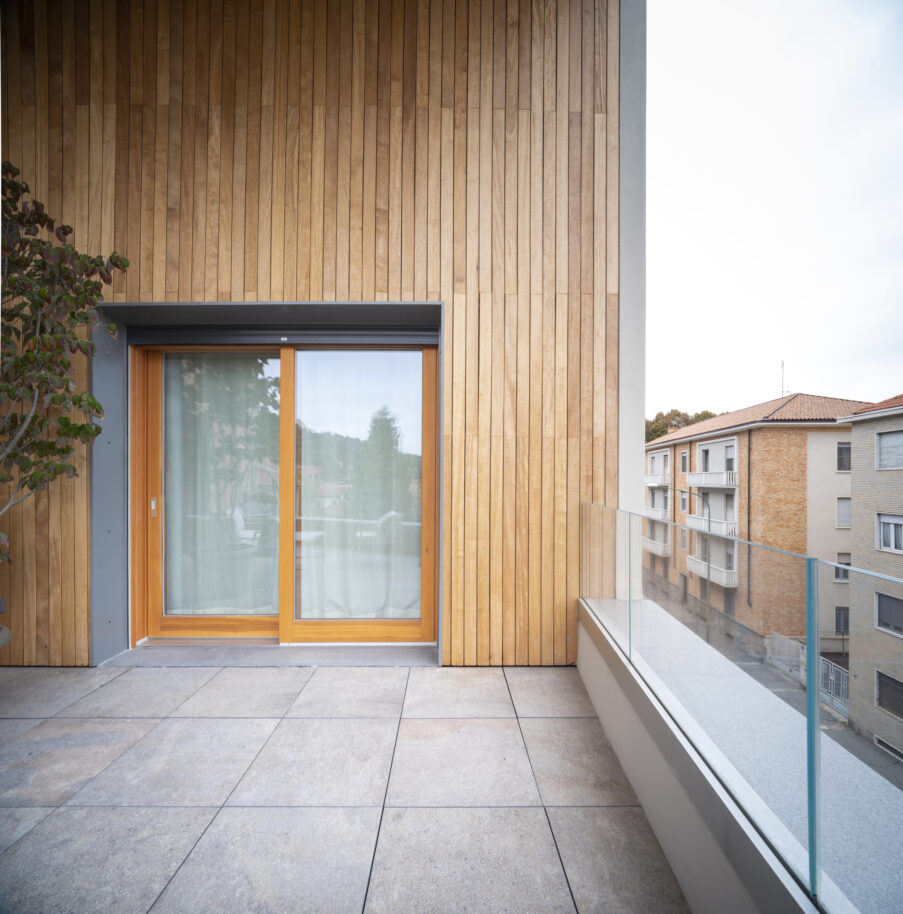