Home in the Orchard by Ramone Steve Studio 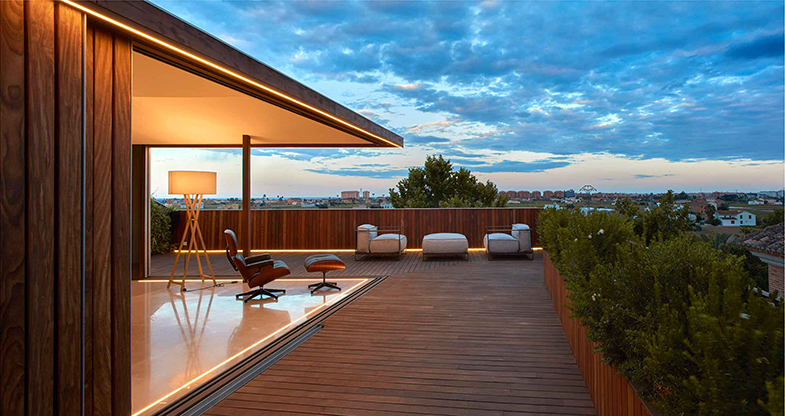 This Home in the Orchard by Ramone Steve Studio is located in the village of Alboraya, in the border area between the urban grid and a great extension of a vegetable and tiger nut garden. It is a house between medians located on the corner of a residential block and therefore enjoys the convenience of urban housing and at the same time, it has its broad views over the orchard that fades into the horizon.

To resolve this project it is proposed a clean and geometric surrounding, white and abstract to which, will be applied some perforations that generate the openings of the house. These subtractions reveal a wooden interior of great warmth that contrasts with the purity of the rest of the facade.
The splatters of wood marked the accesses, both the pedestrian and vehicular, the balconies of the kitchen and the living room and large terrace- vantage point that crown the housing. The rest of the gaps are closed with motorized planks of white krion on its outer face which when opened, show the interior of the wood.

The facade is the result of the combination of a few large white cloths of krion, some splayed arched of IROKO wood, and the slats, which, according to their position, texture and materiality varies. All these elements are arranged within a sealing system that binds the whole.
The divisions of the facades and the combination of materials and textures create a fixture that reminds of the typical subdivisions of the vegetable garden.

A hipped roof to reinforce the surrounding abstract of the house prolongs the nature of the facade.
To the cover of the assembly is subtracted two volumes that make up the terrace and the patio.

It proposes a house closely linked to the landscape thanks to the creation of spaces intended for contemplation.
From the large window of the living room and from the terrace you get a panoramic view over the orchard that fades into the horizon.

The nature of the project is characterized by its multi-colorism. On a white canvas are highlighted some areas of wood and dark stone that marked the subtractions that are applied to the volume.
The light areas are materialized with white krion in the, a pavement of large format in a tone of sand and walls and ceilings painted in white. The dark areas are covered with panels of IROKO wood in walls, ceilings and cabinets and a dark brown stone on the pavement. The furniture is always coordinated with the tone of the space it occupies.

The house consists of three floors with an attic at the surface and a basement.
Access is through one of the splayed wooden openings. On the ground floor, you will find the area of access, a garage, and a guest bedroom. On the first floor are the bedrooms and on the second is the living room. This layout enables the common areas to have higher and distant views on the orchard.
In the attic, there is a small studio and a terrace on the perimeter of the facade.

Since its foundation, this home has been designed with sustainability criteria and has been awarded the energy A certification
The housing is supplied by a system of wells of geothermal energy. In one of the slopes of the deck is placed a plate of a vacuum tube that provides supply to the elevator for low consumption, that connects the housing vertically.
The air conditioning is resolved through underfloor heating combined with air conditioning. It has been taken into account that each room has natural cross-ventilation. In addition, there is a ventilation system that controls the humidity from the air and it is constantly renewed from taking outside air.

The façade openings are protected by a system of motorized and steerable planks. In the he large glazed surfaces, a double glass has been arranged with thermal and acoustic insulation with solar control. In addition, the housing has a surrounding of ten centimeters of rock wool, which ensures a high thermal insulation.
All the lighting is dimmable led integrated in the architecture, so that the power consumption is very low.
The whole house is controlled by a management system of home automation, from the airconditioning and under floor heating to the degree of intensity of the illumination of the housing. 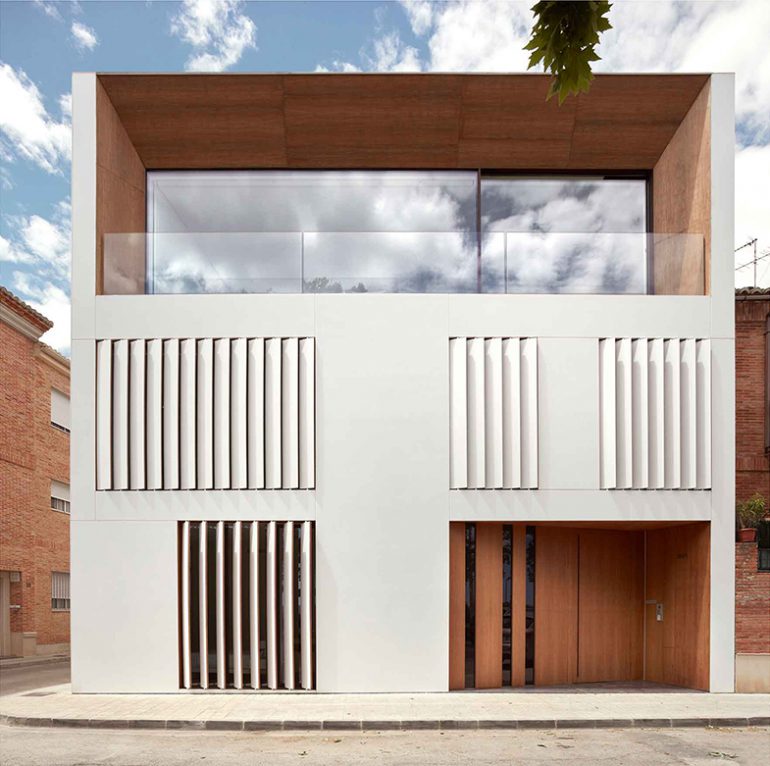 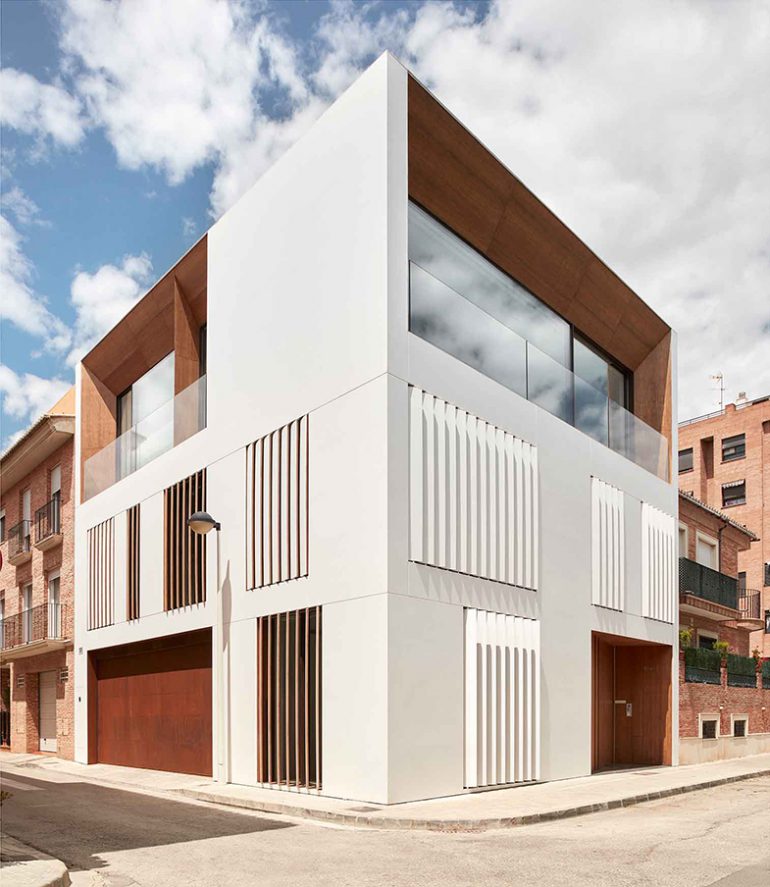 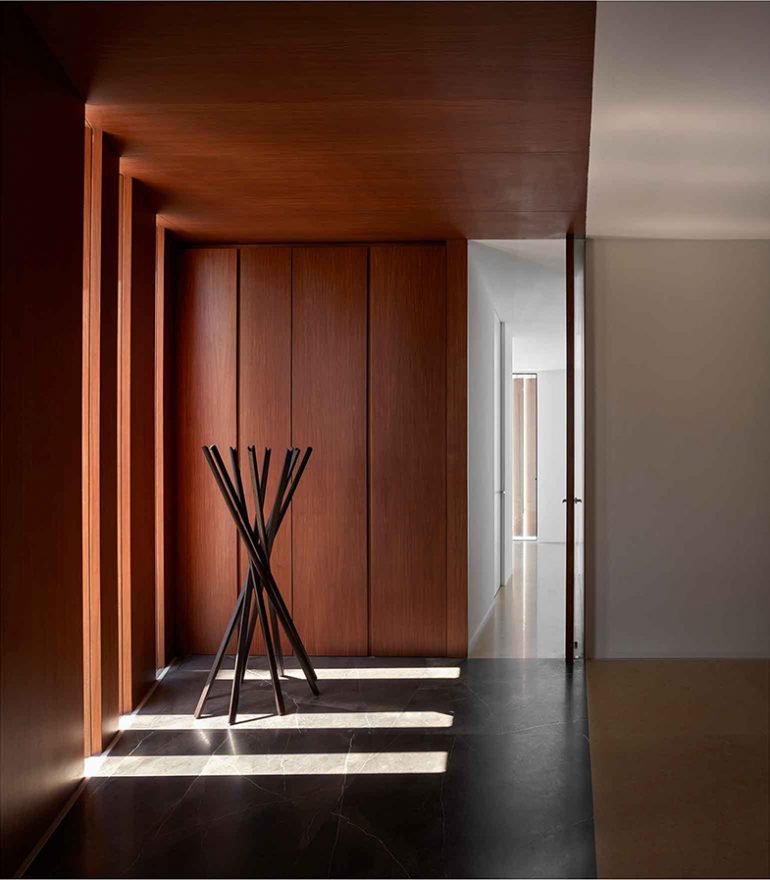 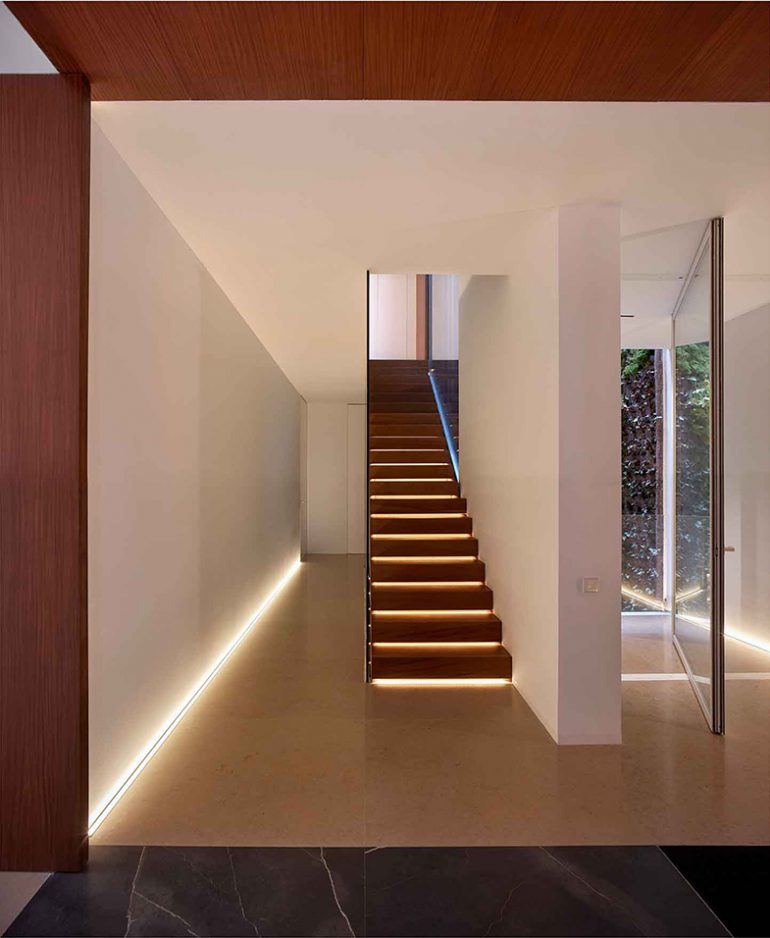 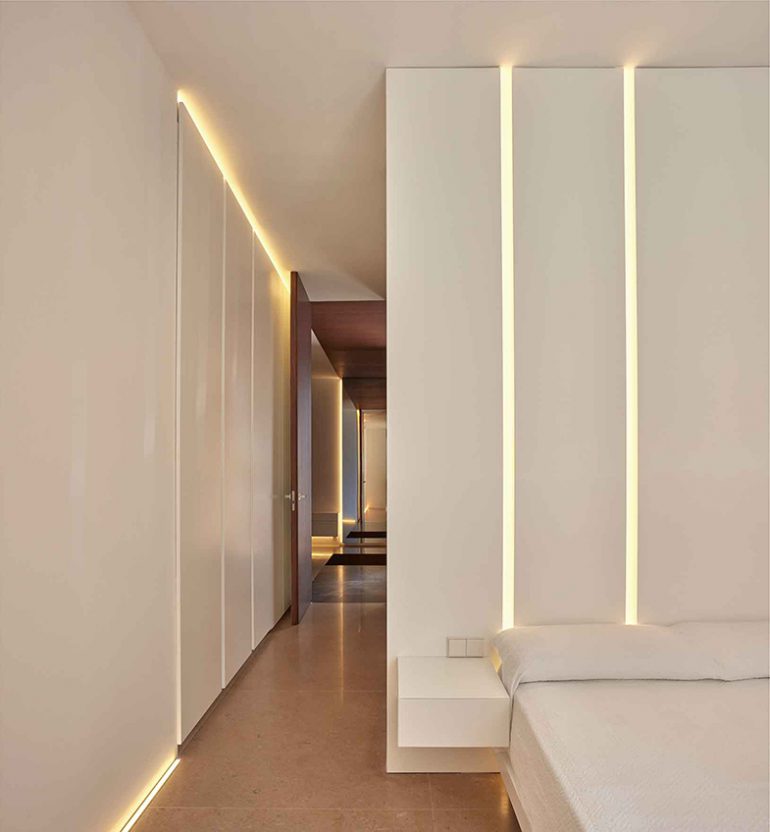 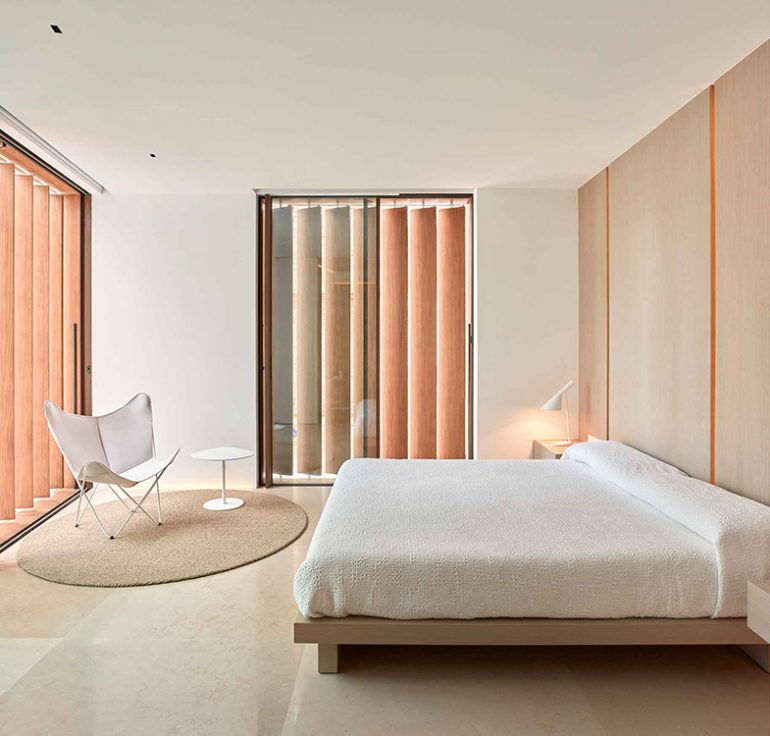 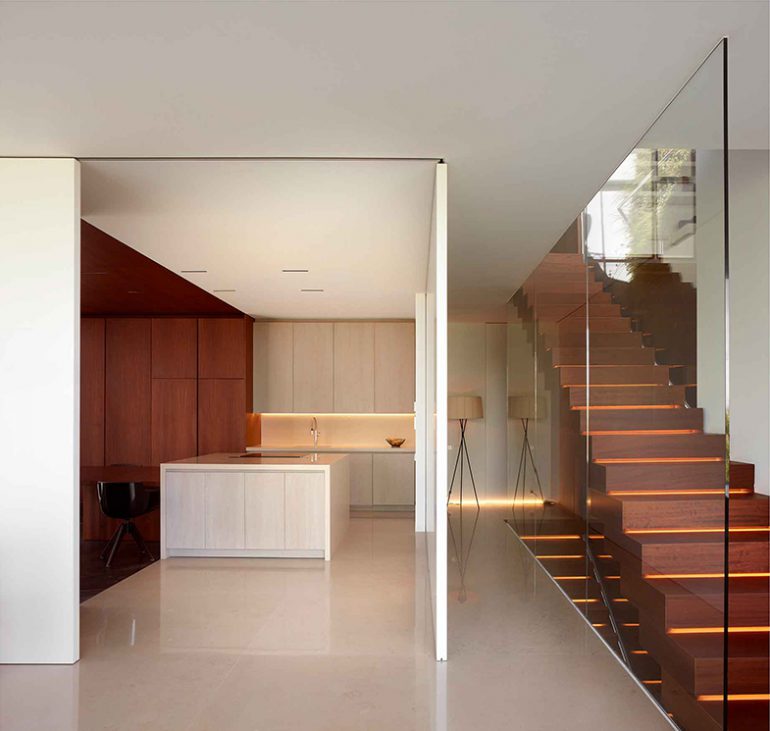 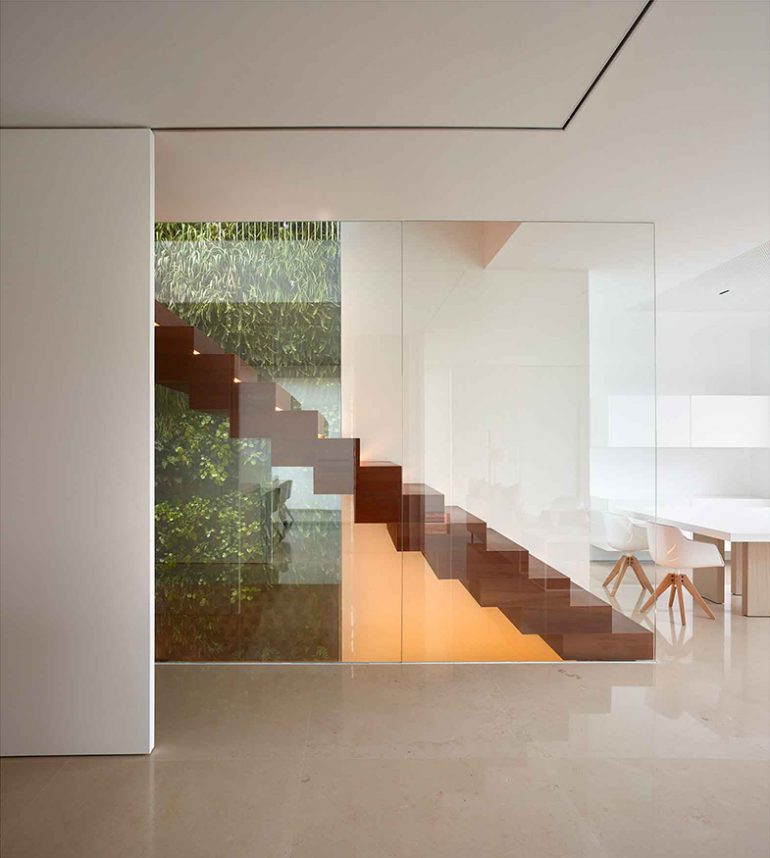 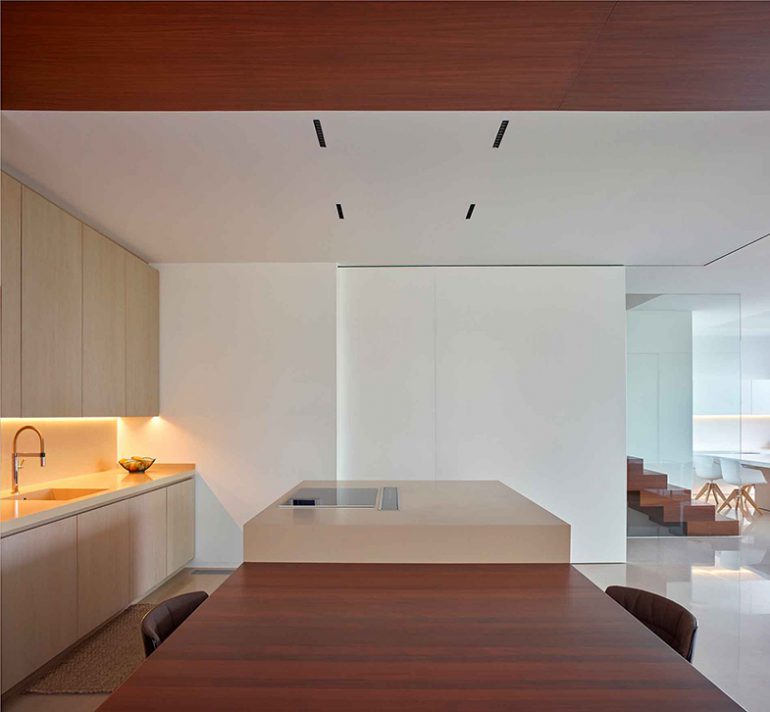 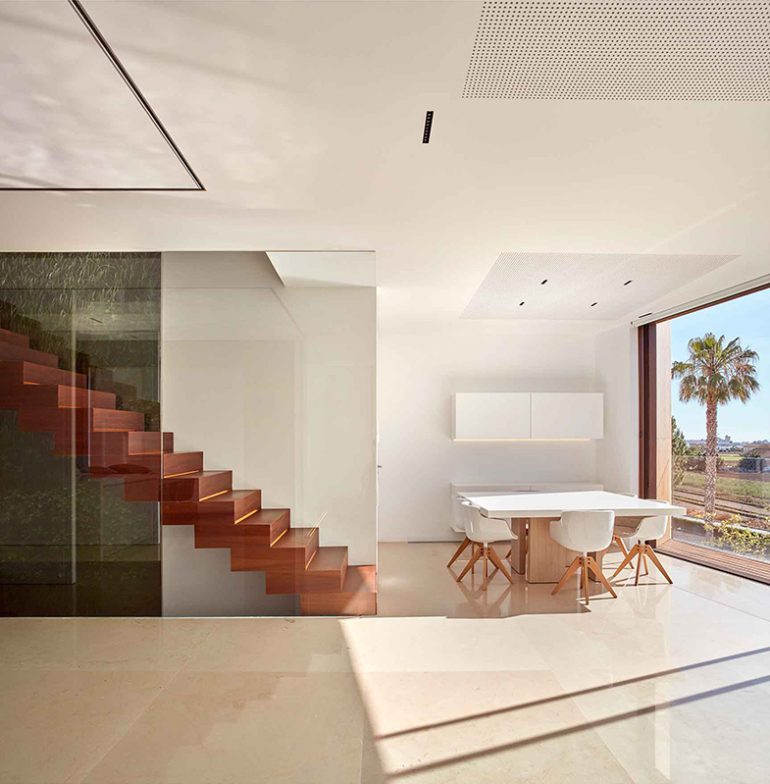 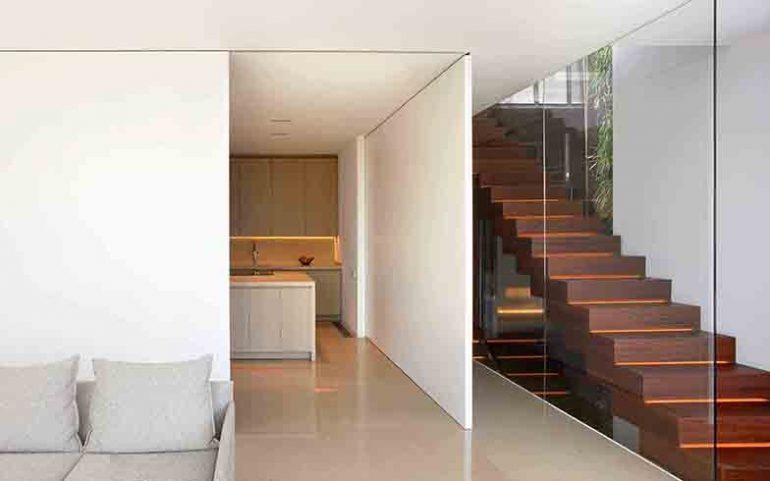 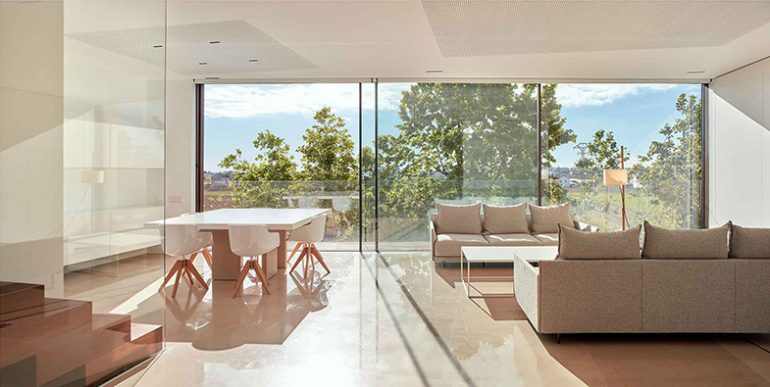