To provide the best possible service, we use cookies on this site. Continuing the navigation you consent to use them. Read more.
PROJECTS
·7 December 2020 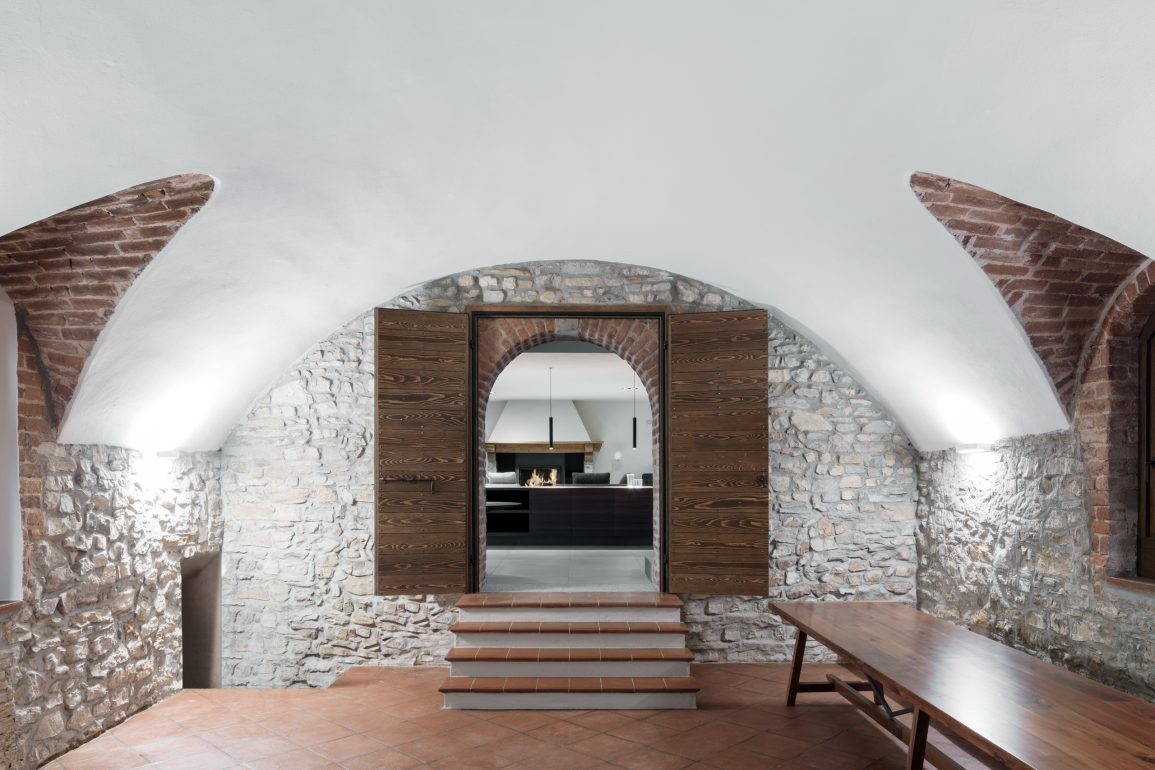 The project developed by the a25 architectural studio focused on the renovation of a warehouse with an adjacent phenyl of a historic building in Montevecchia, Brianza.
This area morphology and the terraces that help enhancing the local wine production, was the main feature that inspired the renovation towards the union between the living comfort offered by the new technological systems and the surrounding landscape.

The working process began with the design of three interconnected spaces.
The old vaulted cellar, previously used to transform the must and preserve the wine, and the storage area with the portico underwent minor maintenance work, such as the renovation of the floors where the old mixed limestone and molera stone masonry has been highlighted.
The third contiguous space is the warehouse with the phenyl, divided on two levels, which thanks to a complete renovation is now the fulcrum of the living space.
On the ground floor of the structure are the entrance and the kitchen, on a slightly higher level we find the living room and a toilet.
The bedrooms and toilets have been placed on the upper floor, which has a direct view of the double height space.
In the house have been inserted materials that are part of the traditional rural architecture of the place: stone, which we find in the flooring, rough plaster for the internal walls and wood for the flooring of the upper floor and the furniture.

The furnishings are studied and designed to measure as devices that increase the relationship between the different areas.
The kitchen and living room have furniture aligned on the raised step, defining a connection with the adjacent spaces while having different functions. The arch between the cellar and the entrance and the first step of the staircase leading to the upper floor are decorated in bush-hammered stone, thus becoming the element that defines the passage between one space and another.
The general shape of the shell remains almost unchanged, focusing rather on the enhancement of the material.

The Brianza-based architectural studio a25 that contributed to the creation of this project was founded in 2018 by Francesco and Paolo Manzoni. Their skills range from urban architecture to interior design and urban planning.
In 2019 it was one of the firms selected to represent the nation with the “Padiglione agricolo Bressanella” project at the International architectural Piranesi Award, while in 2020 they won the BigSEE Architecture Award in the Public and commercial architecture category. 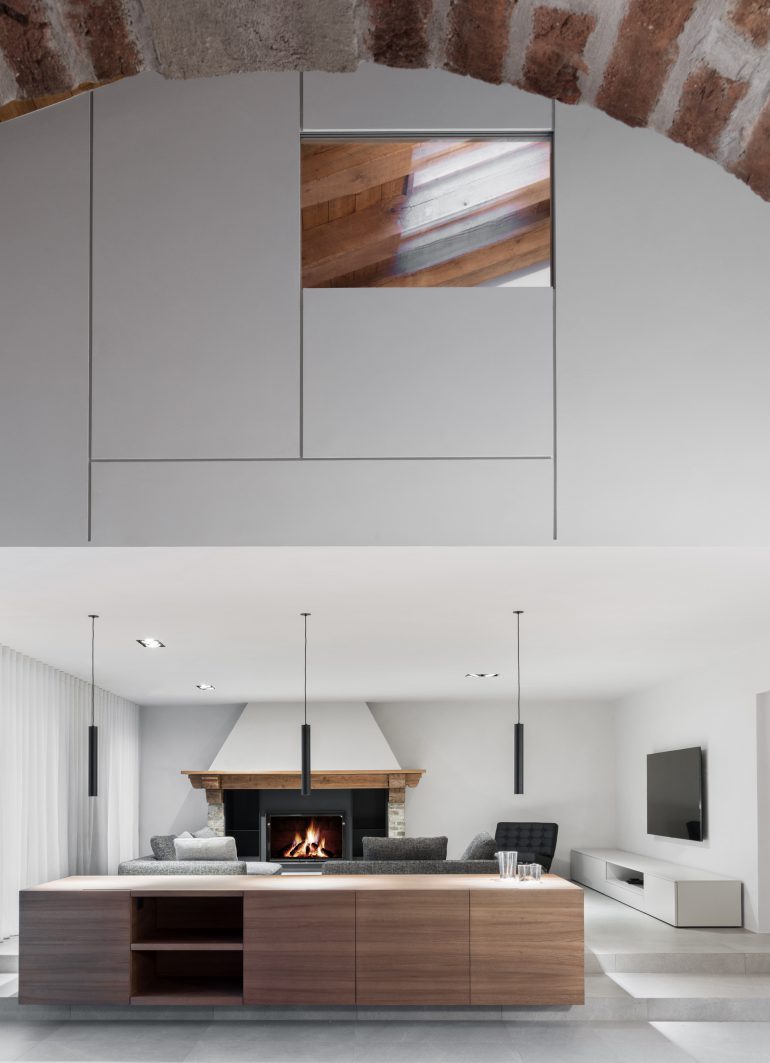 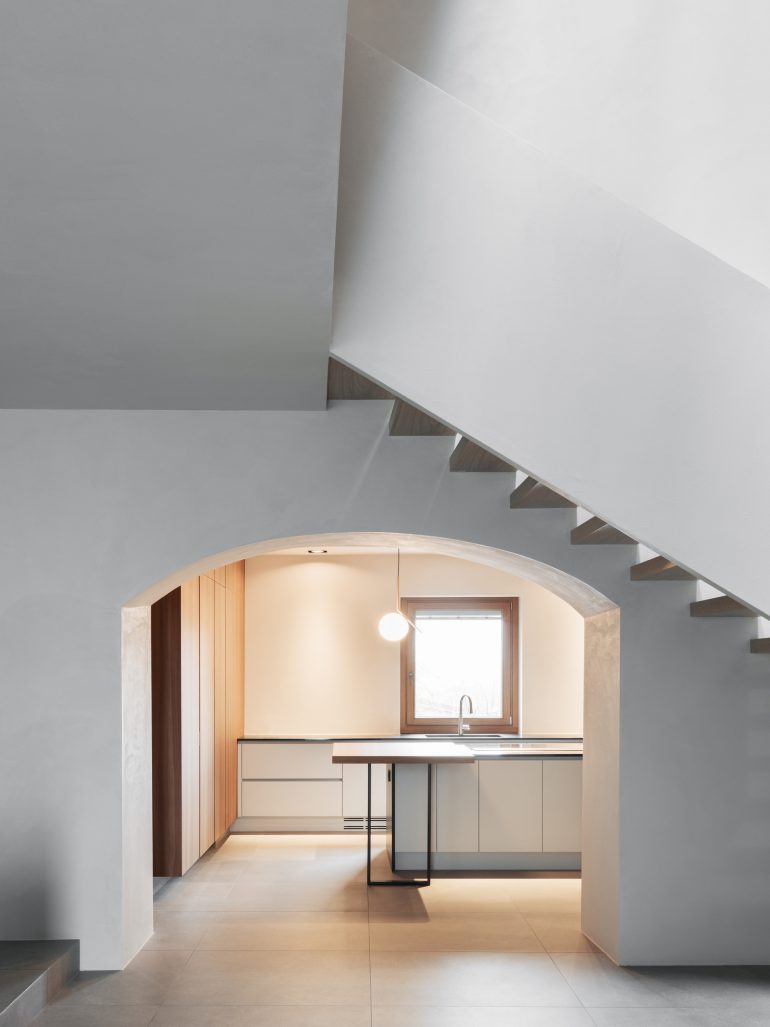 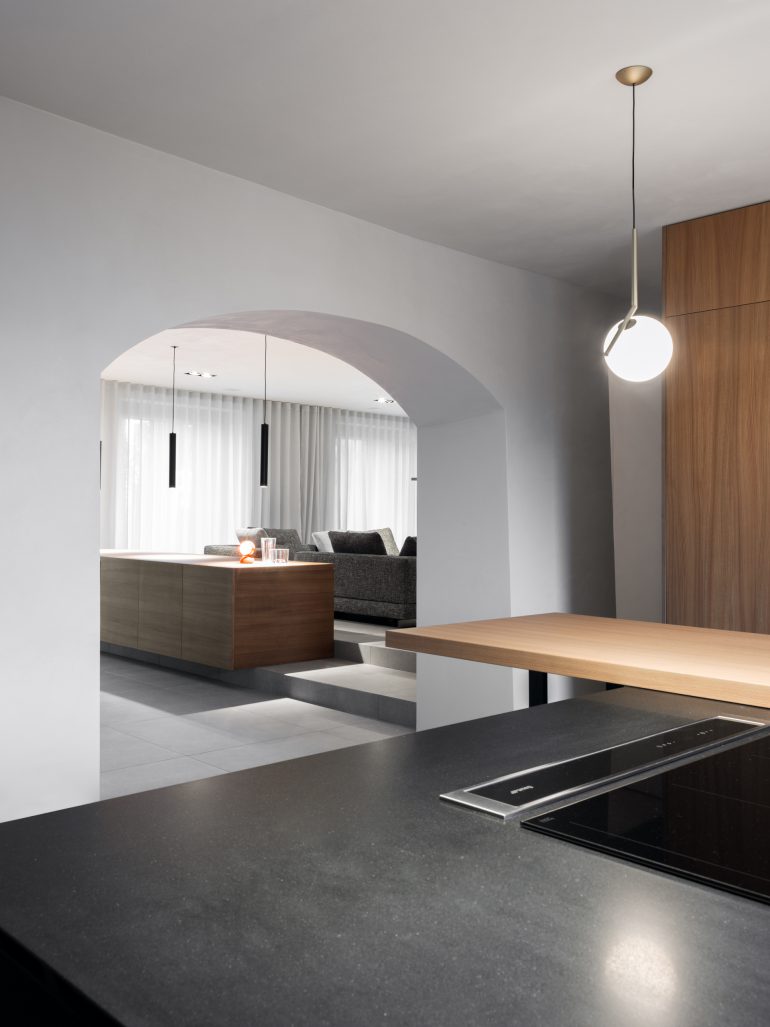 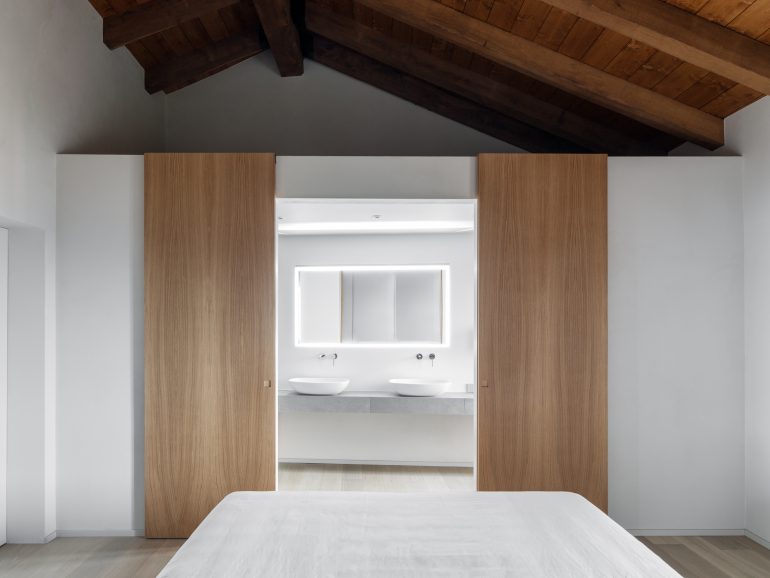 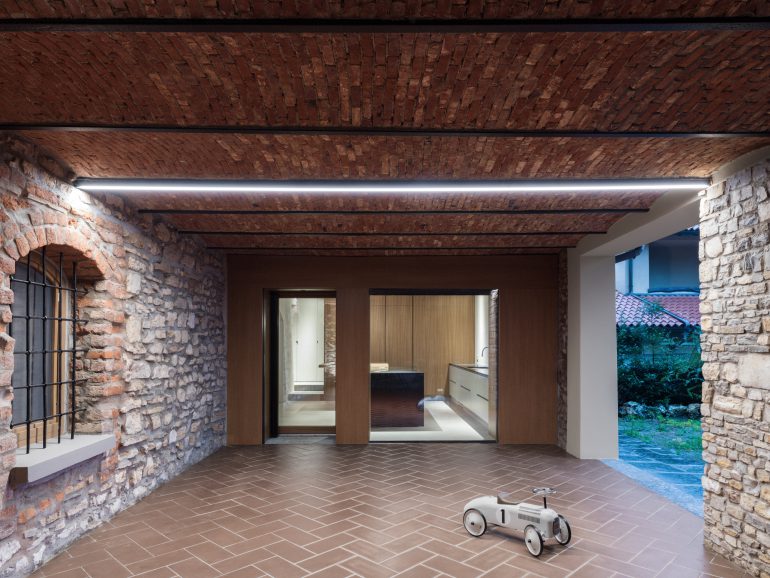 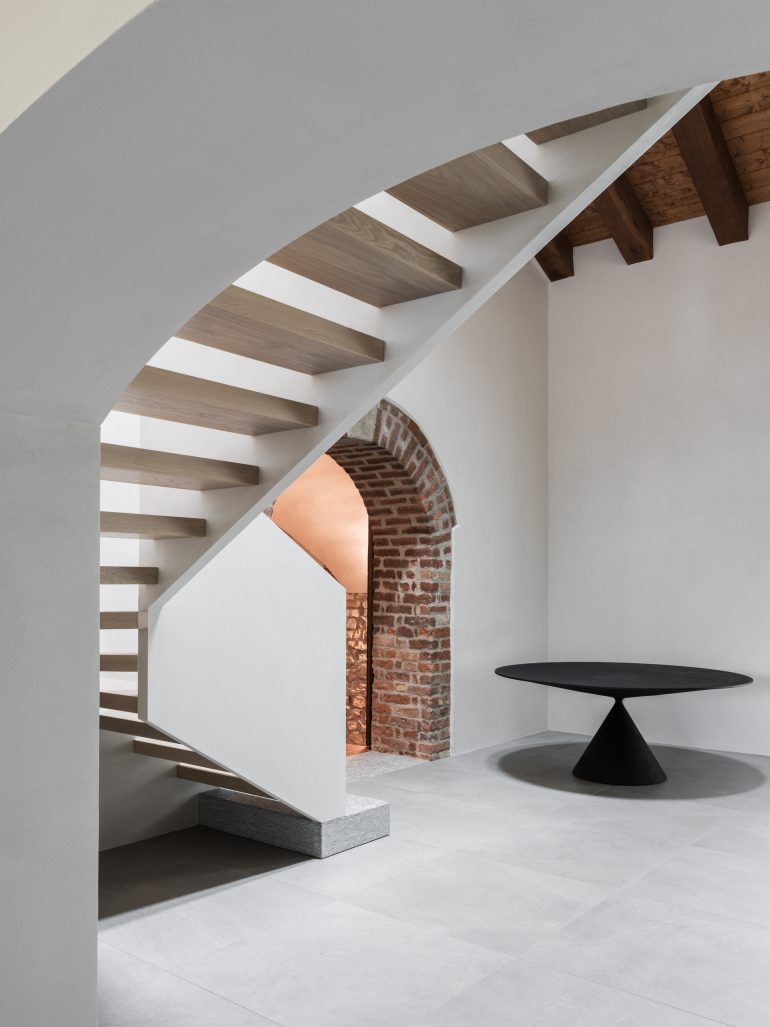 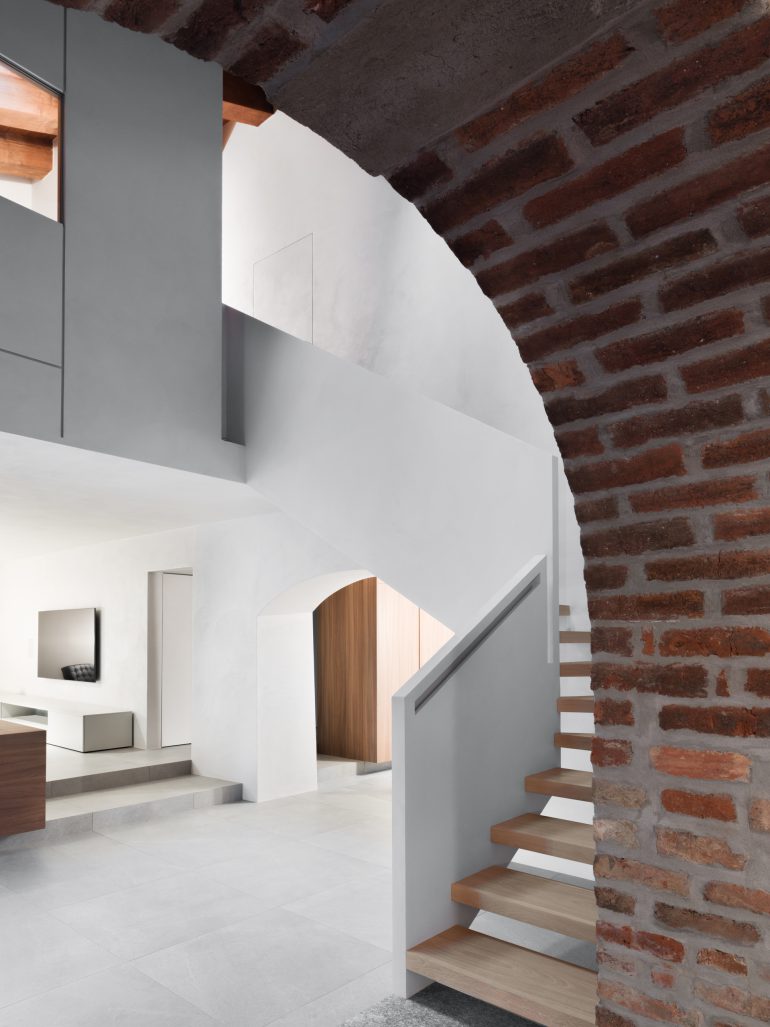