To provide the best possible service, we use cookies on this site. Continuing the navigation you consent to use them. Read more.
PROJECTS
·29 January 2018 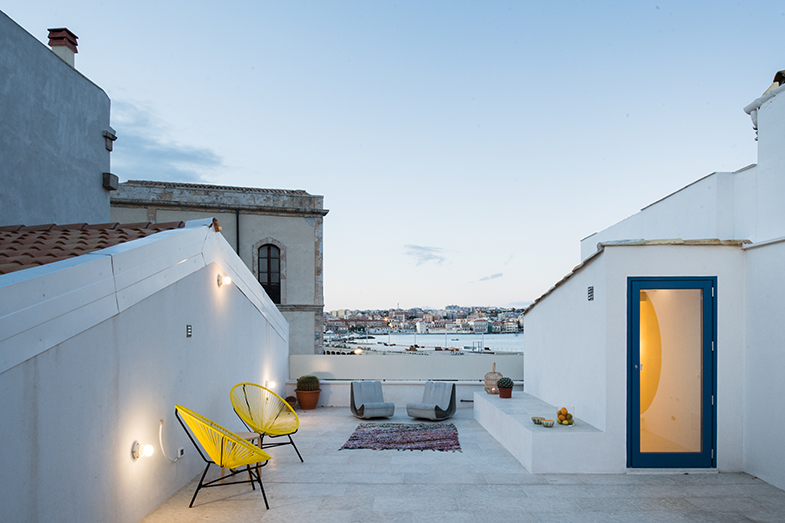 Facing the Ionian Sea, this former fishermen’s house by Moncada Rangel was transformed into a diptych house of one or two units depending on the number of guests.
The idea behind the restauration project was to maintain the eclectic use of materials and to bring back the original layout. “When we took out the stucco of the interior walls, we found out that the house has been built gradually, room-by- room and not as a whole project. The fishermen family that lived here was gradually growing throw time, and so did the house.” the architects explain.

The materials chosen resemble the sea and its ever-changing color. The palette of materials creates a blue polychrome materiality, that vibrates when exposed to the bright natural light.
In the main dwelling unit, facing a smal private courtyard, cement tiles were used to pave the floor, bringing to mind the typical meditterraneum homes with an irregular weavy pattern, slightly changing almost by mistake.
The only newly built wall is a giant calacatta arabescato marble slab, dividing the toilet from the alcove bedroom, as an object trouvé founded in a nearby old church and reused.

In the second unit or secondary bedroom, walls are covered by ceramic tiles, made and painted by hand by local artisans, with an inspired pattern by Ellsworth Kelly work, simulating the sea. The white painted wooden floor refers to the old boats that one you can see from the window. The wood has also an irregular surface and has no refinement
on the surface with the trace of the cutting process.
A wall mirror is reflecting the sea view from the window, creating an enlargement-illusion of the space.
When you arrive to the terrace, coming from the sunrise colored metal staircase, the view to the sea is overwhelming.
All the horizontal surfaces are covered with the same sandy limestone used in the nearby castle as a virtual extension of the “Forte San Giovannello” pedestrian path.
Its far wall is punctuated with handcrafted tiles from Caltagirone in an organic wave pattern inspired again by Ellsworth Kelly shapes.
An open-air shower marked by a giant red circle indicates the direction of the sunrise. 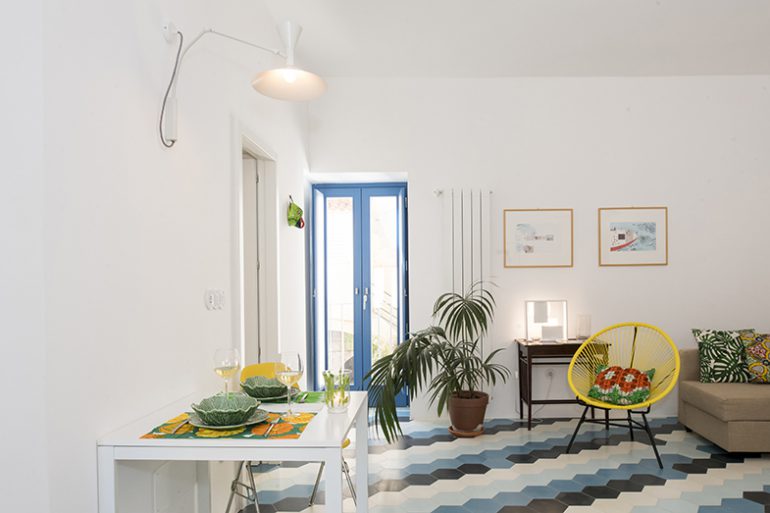 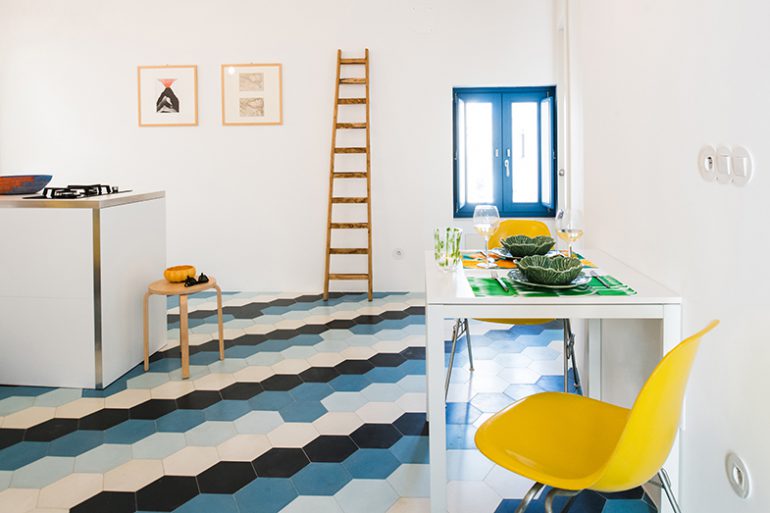 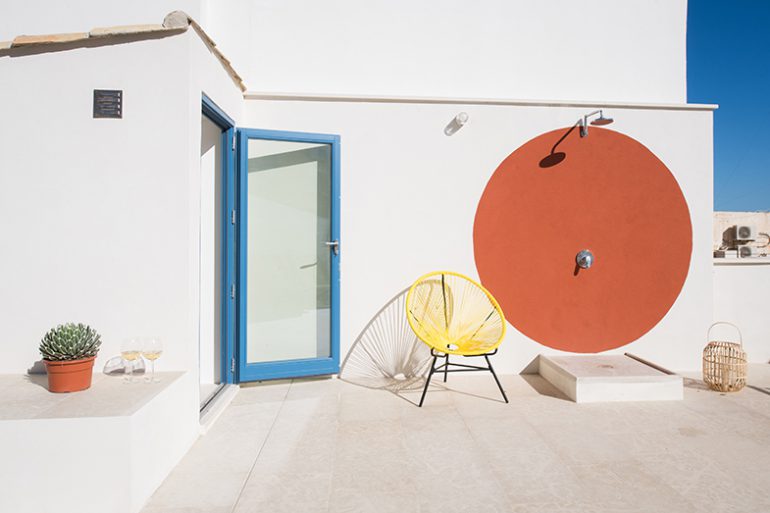 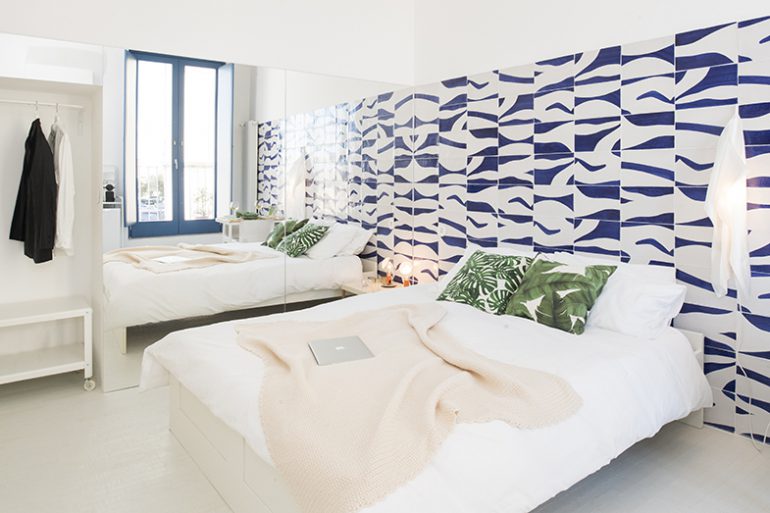 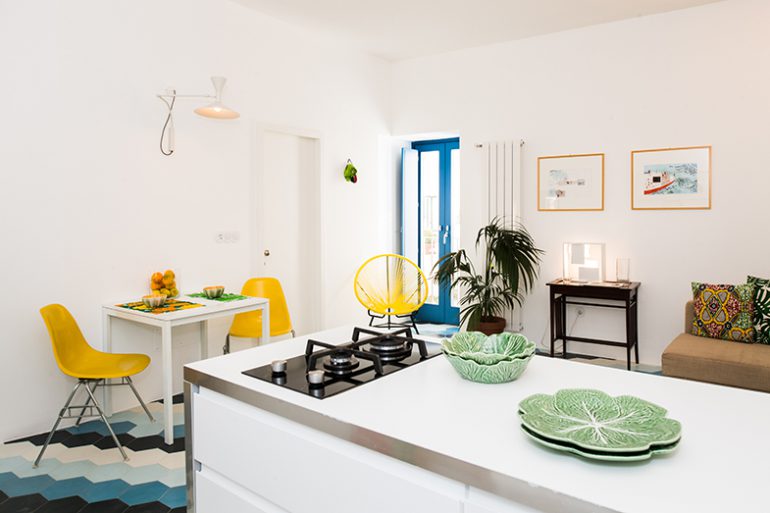 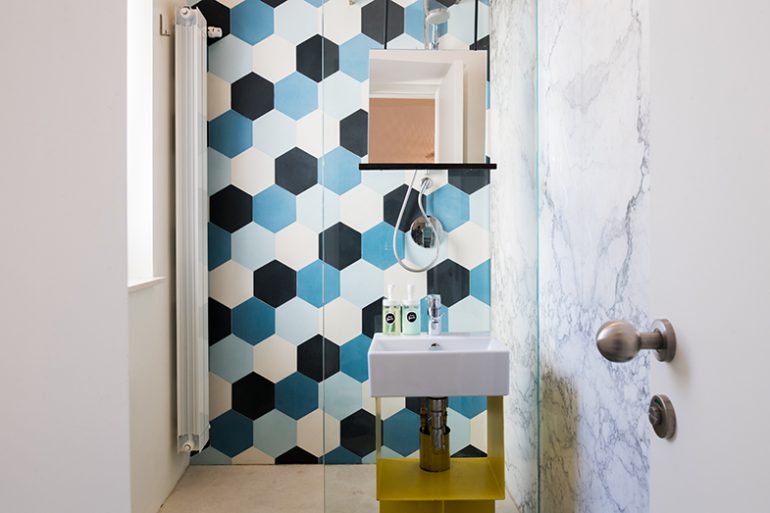 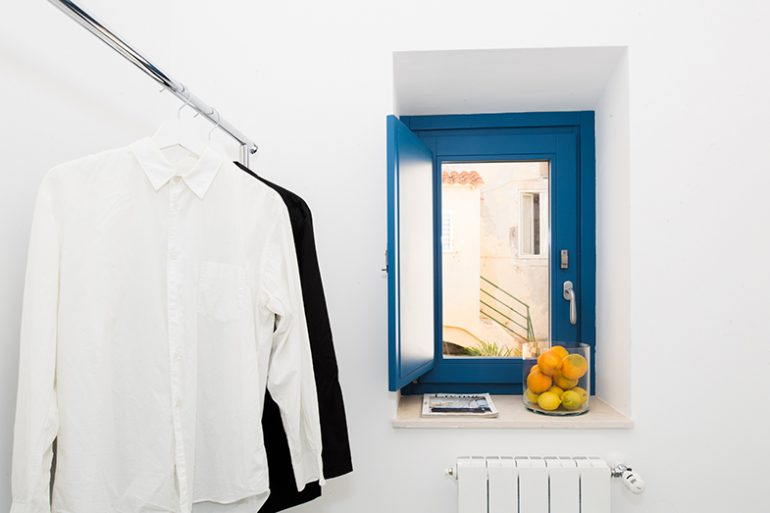 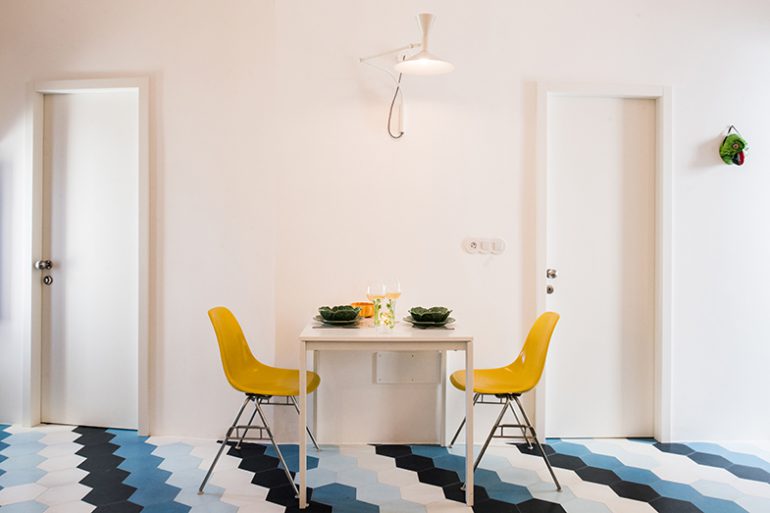 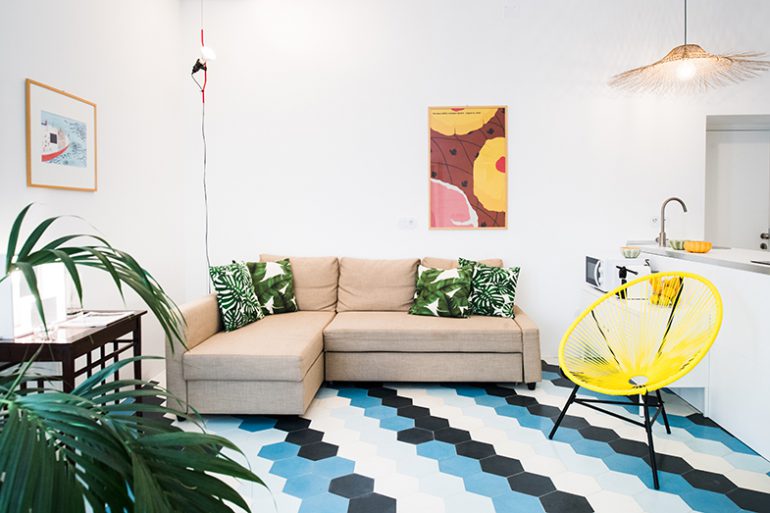 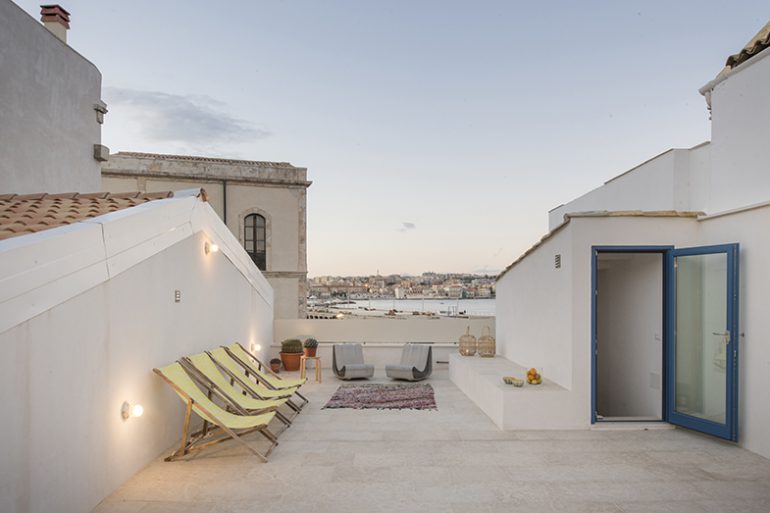 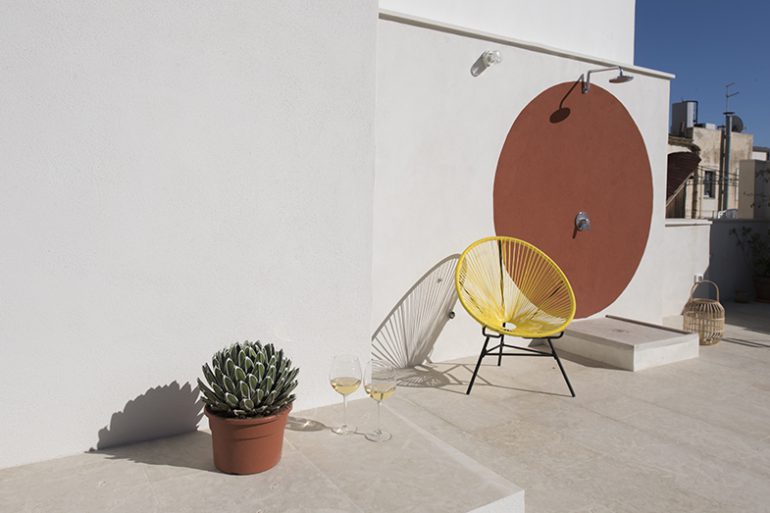 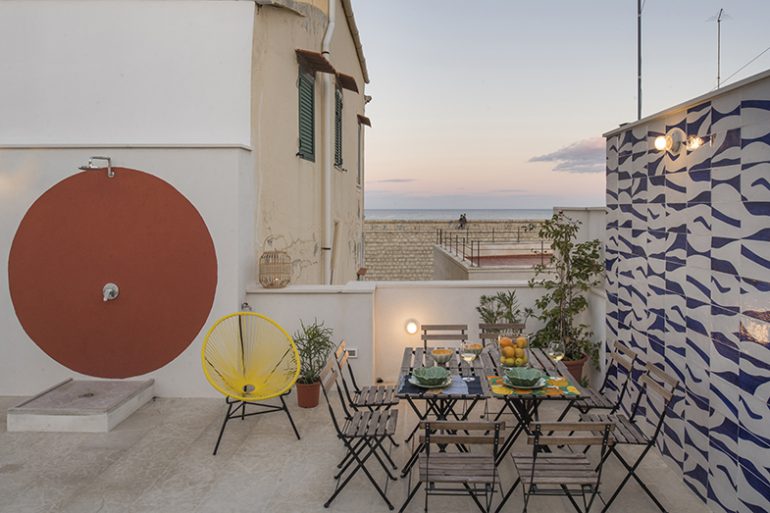 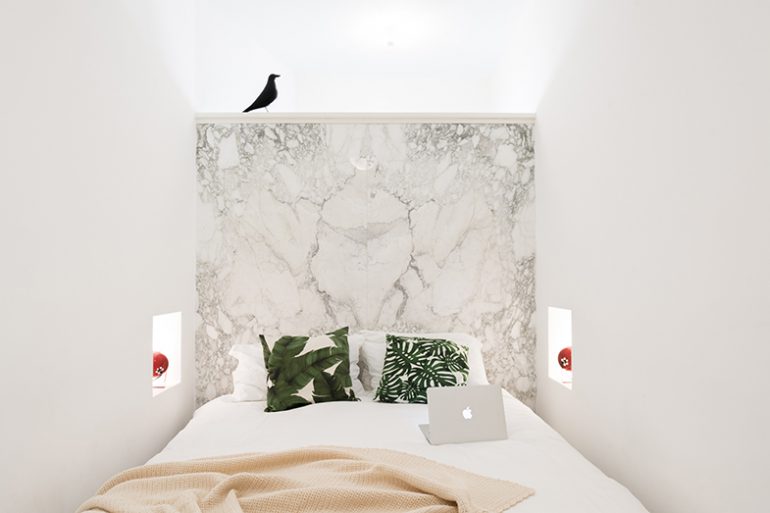 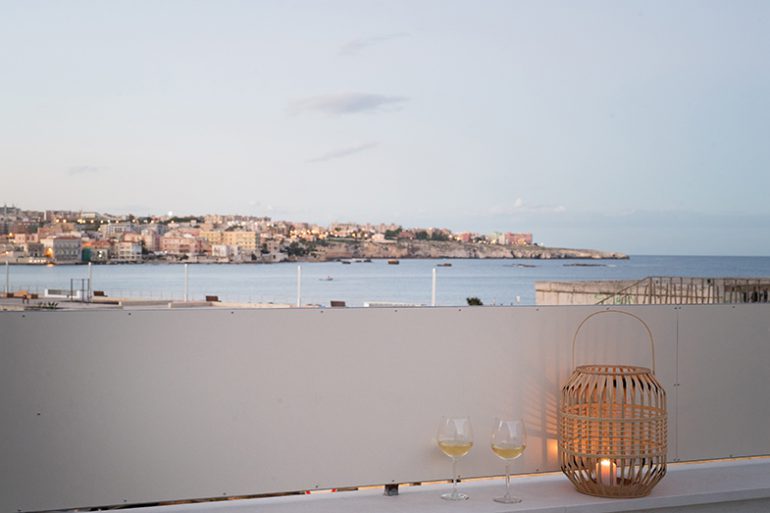 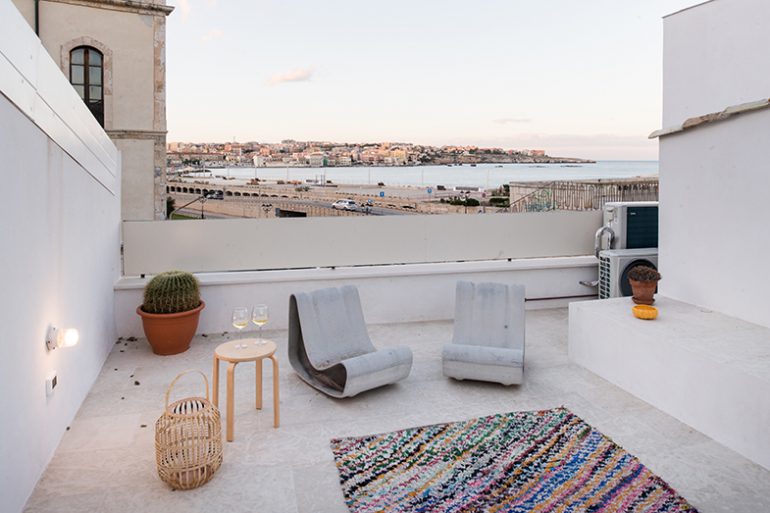