To provide the best possible service, we use cookies on this site. Continuing the navigation you consent to use them. Read more.
PROJECTS
·17 January 2022 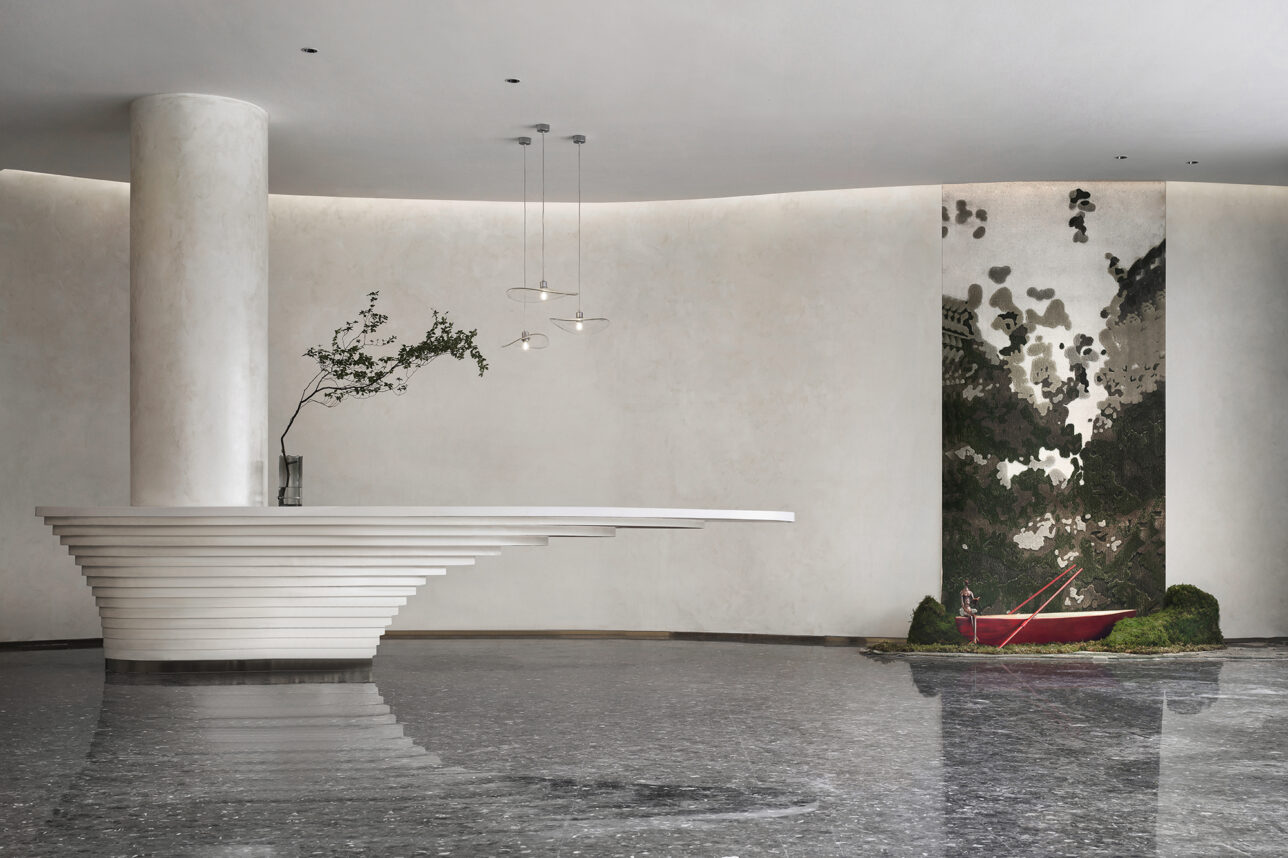 In the city of Neijiang, also known as the Sweet City, the Future Ark Sales Center stands next to the winding Tuojiang River, which flows through the city nourishing the local people and making Neijiang a modern business-friendly city. In particular, The city is regarded as the spatial carrier of various resources, the most important factor of space appreciation has now become the share of natural resources. the Future Ark Sales Center refines Neijiang’s cultural and historical symbols from the temporal dimension to awaken the city’s unique cultural memory. In the East, great attention is paid to neutrality and introversion, in this case these cultural principles were adopted as the aesthetic cornerstones of the design. A pathway slowly leads into the reception lobby of the sales center, which shortens the movement and echoes with the natural landscape, contrasting with the elegance and high sense of interior space, and guiding people to enter this lobby taken as the internal and external transformation and emotional production space. White has always occupied a very important position in oriental art. The artistic principle of Zhang Daqian’s Chinese paintings also follows the traces of nature. This design embodied this two-dimensional art form in a three-dimensional space, making the atmosphere more pure, allowing visitors to visually focus on the exhibition area, it seems intangible but meaningful, silent but sound.

Echoing the Tuojiang River just a few steps away, the design adopted an aerodynamic treatment to soften the original architectural form, making the interface lines smooth and sinuous. The large blank area creates an even sense of flow as the wall extends and guides the conversion of moving lines. The original 29 non-removable columns in the space are connected in series in a flexible and effective way. Between the irregularities, the design creates an order that flows naturally. From the perspective of the overall layout, the regular construction of the space revolves around 4 large empty areas, the lobby, the exhibition area, the spiral staircase and the atrium landscape. The corrugated steel plate on the ceiling turns into the reflection of the bright water of Tuojiang River. Various installations are kept inside, creating a concentrated display of culture and collective memory, still continue the regular visual rhythm. Different materials and shapes were combined to suit the conditional and functional needs of different areas but also had a deeper value. The solid wood layered in the exhibition area abstractly expresses the concept of modern skyscrapers, echoing the architectural patterns of the exhibition area but at the same time representing a traditional oriental building material.

Fishing nets and fishing boats are drawn on the side of the trading area, symbolizing the traditional scene of “Thousands of boats pass by like the wind” was recorded by the ancients. Now it has become the gene of local culture and is activated at this time. The spiral staircase is the most attractive connection between the upper and lower floors of the project. Circulating from the ground, it is light and artistic. On the one hand, it plays an important functional role as a line of movement. On the other hand, it acts as the centerpiece of the space with its red artistic sculpture. Under the atmosphere of the white space, it gives people desire and imagination. The children’s area is located in a relatively independent corner of the space. In this space full of childish and artistic atmosphere, the colors of the space are rich and vivid, but still smooth, delicate and neat. This is the result of the moderation of modern art, and it is also a reflection on the search for relaxation and entertainment in modern life. The original intention of the project is to satisfy and enhance the spiritual needs of daily thinking, aesthetic, cultural and even philosophical of Neijiang residential life by complicating the emotions of visitors into an aesthetic experience that leads to consumption inadvertently and unconsciously. 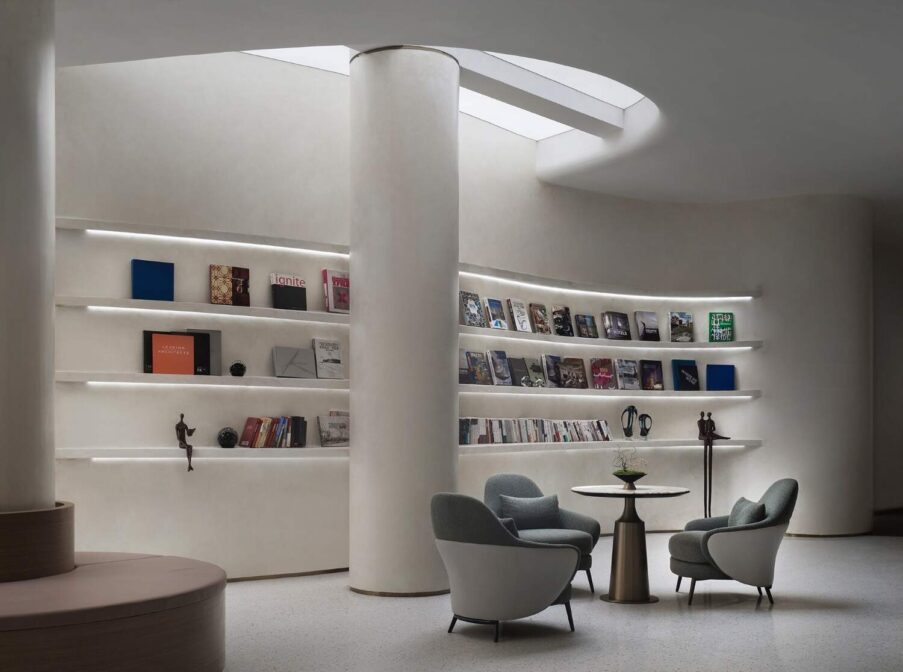 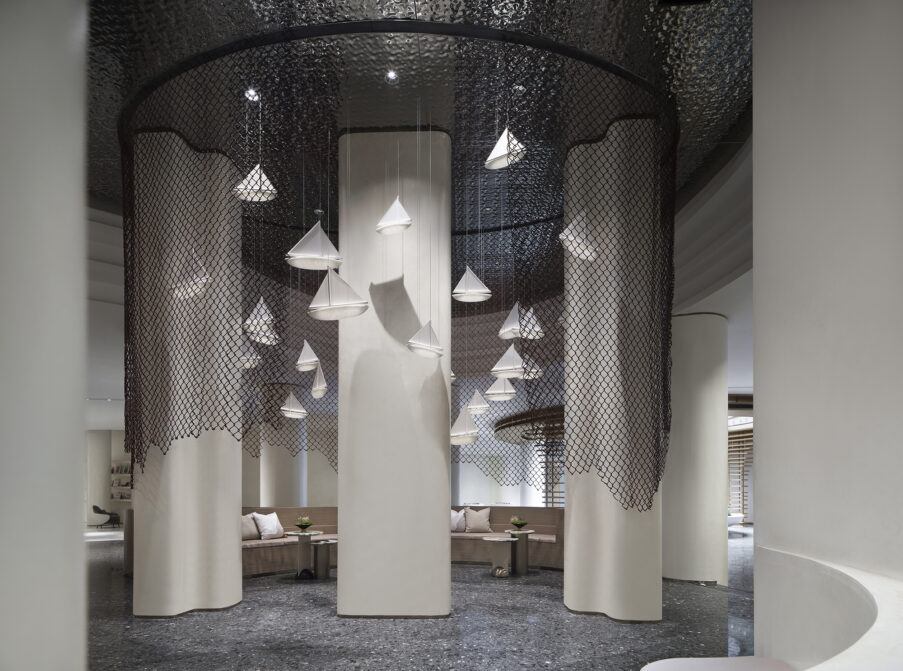 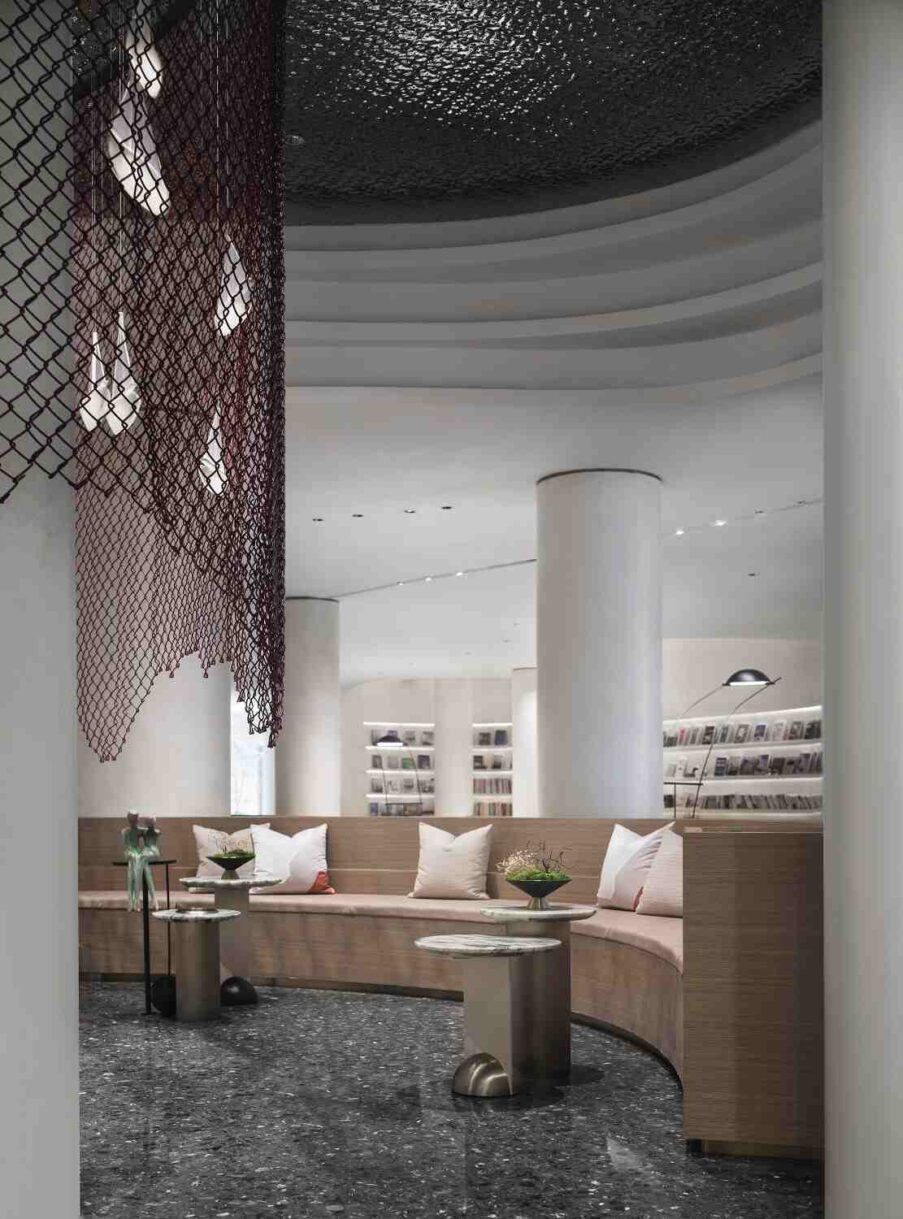 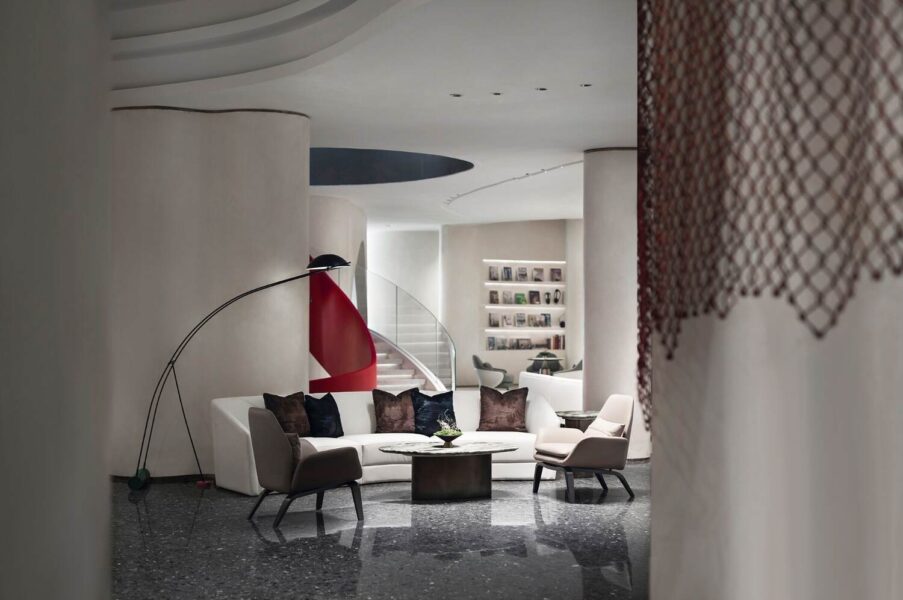 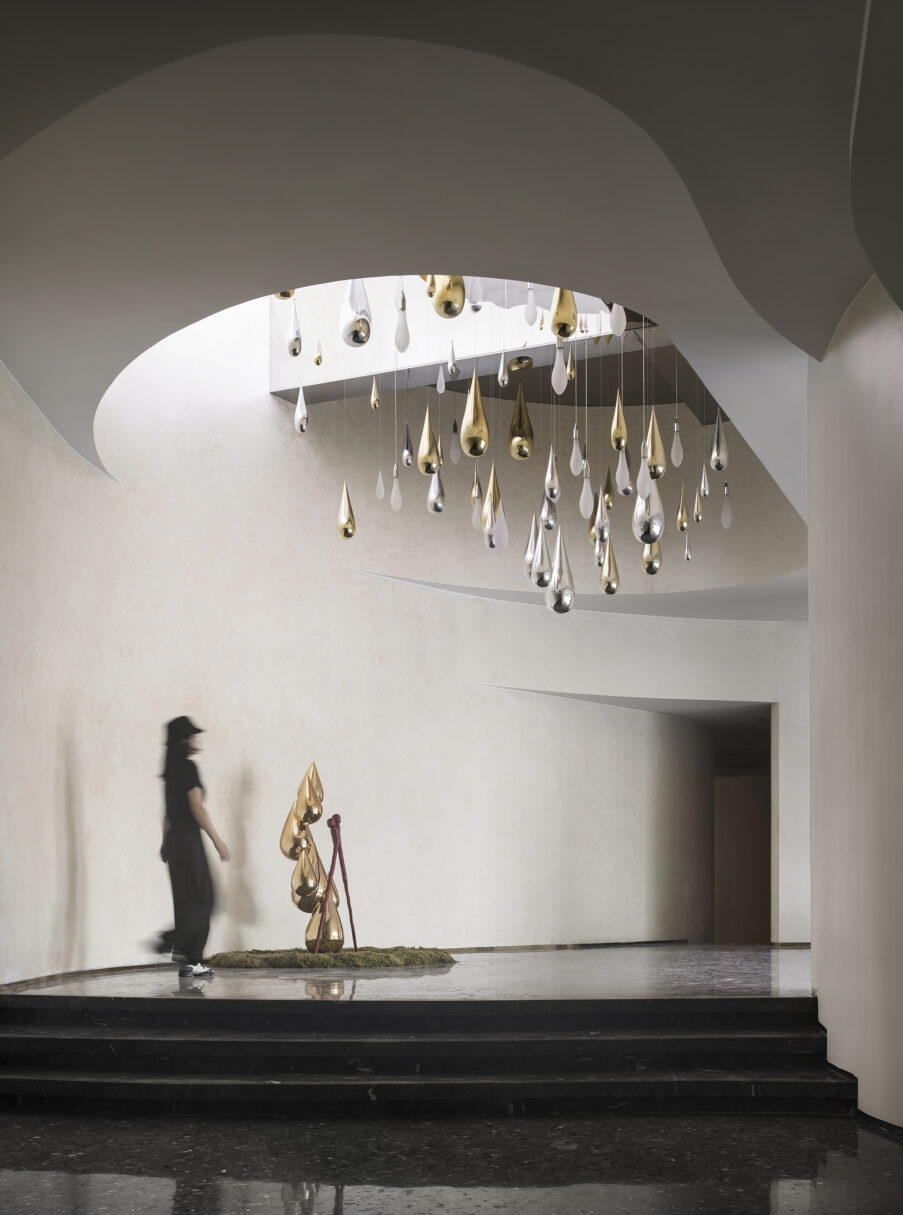 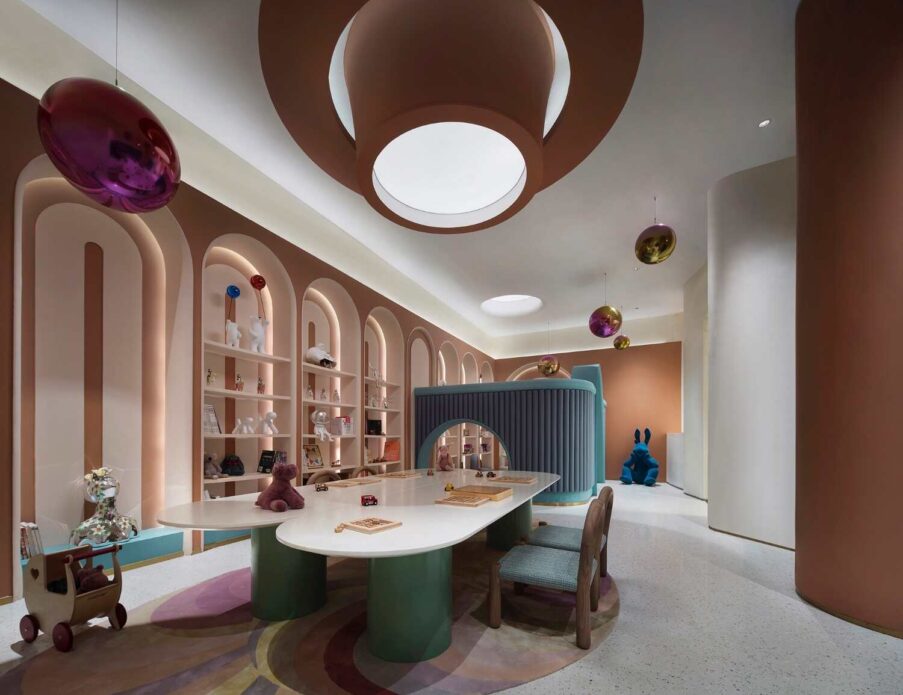 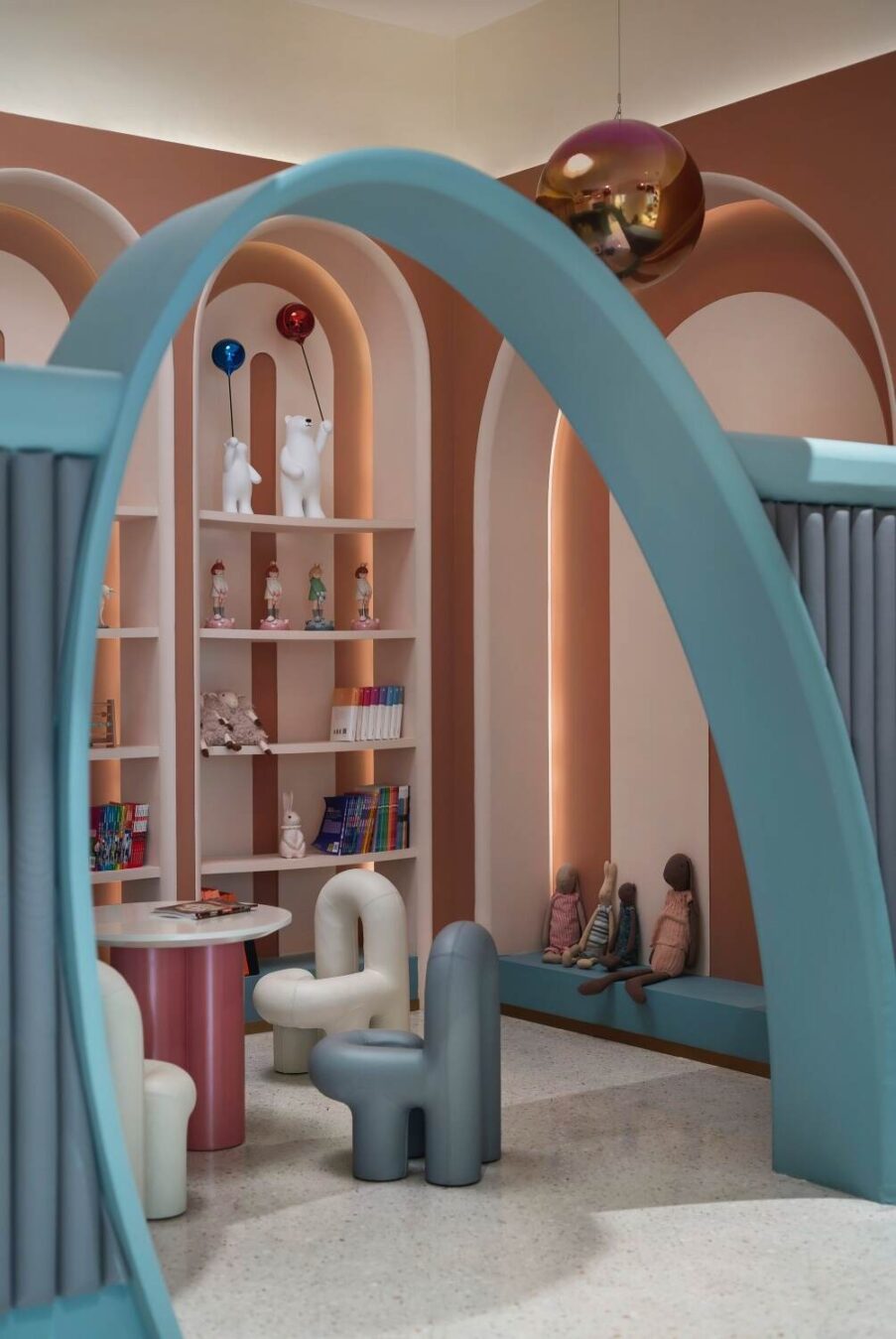 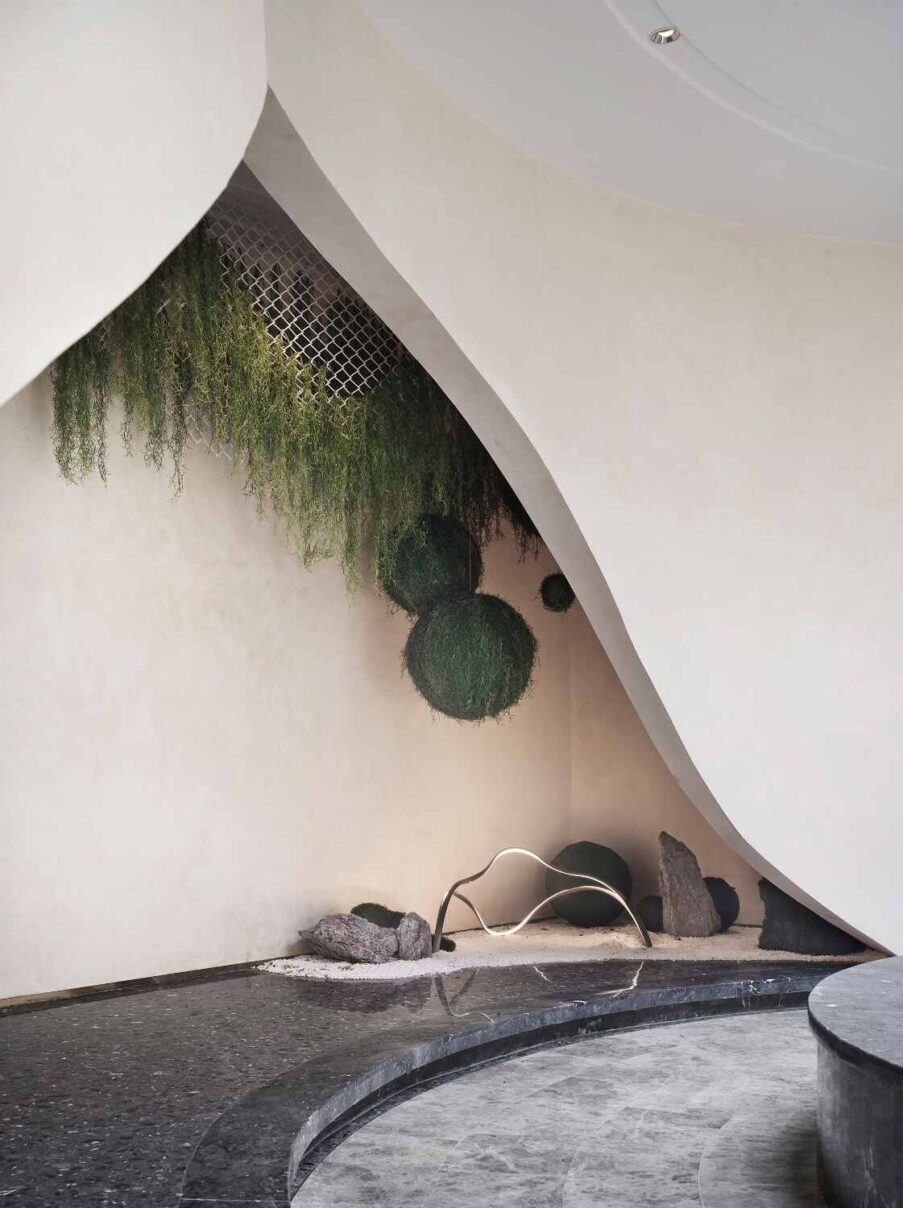 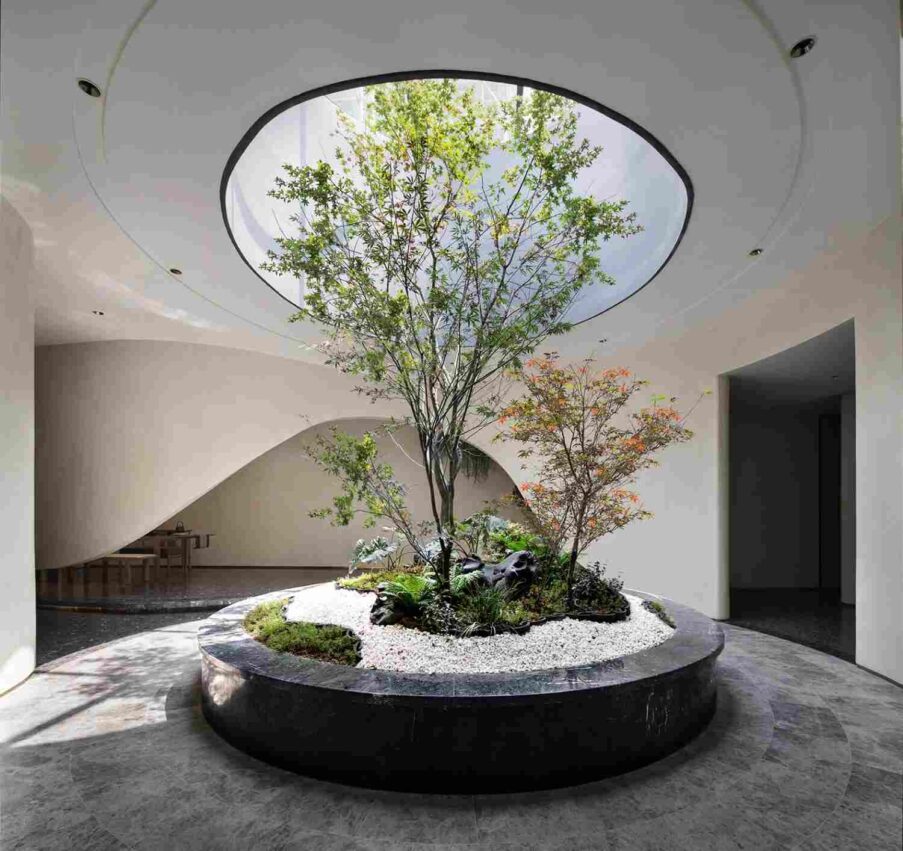