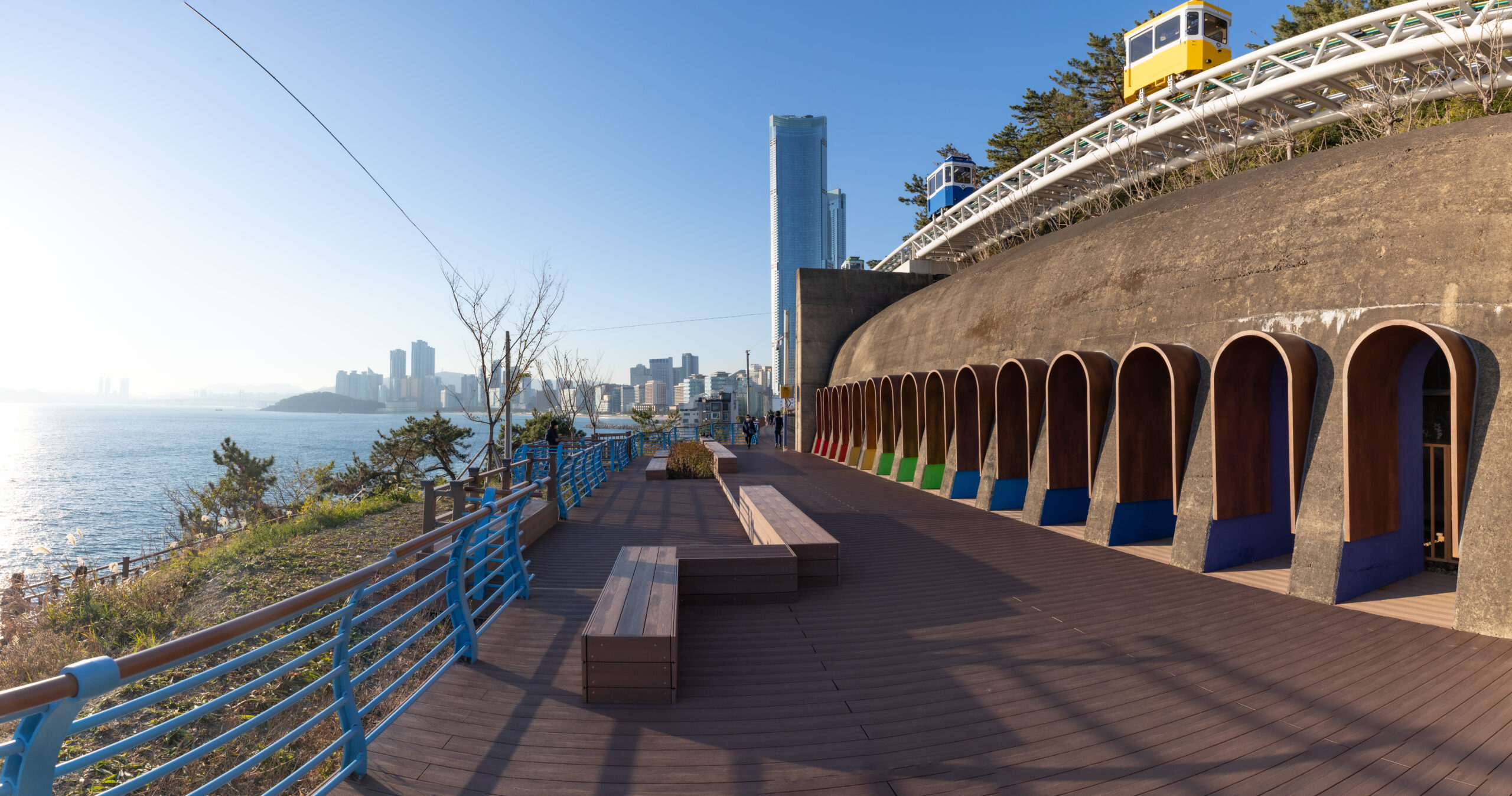 Busan through the Blue Line Park

The Blue Line Park has been opened in Busan, an urban park that gives the city a natural, recreational and narrative space, enriched by installations that amplify the experience. The Migliore + Servetto studio was commissioned to provide artistic direction and design of the pedestrian paths, visual identity and wayfinding, working on several levels to restore the relationship between the inhabitants and the abandoned coastal area. The route of the Blue Line Park starts in the ultra-modern district of Haeundae and is divided into three main phases: the first is Mipo Station, the starting station, at the foot of the Haeundae skyscrapers; the route then winds its way along a rocky peninsula on the sea until it reaches Cheongsapo, a typical fishing village jutting out into the coast with its small port; finally, it arrives at the historic Songjeong Station, a Busan seaside resort with sandy beaches popular with families and young surfers.

The project first addressed the relationship between the new route and the densely urbanised context of Haeundae, starting at the entrance to Mipo. This initial segment acts as a transitional space from urban chaos to a slower dimension that invites people to enjoy walking, leisure and contemplation of coastal views. The entrance is flanked by a system of corten steel benches with fluid forms, followed by an open space punctuated by six imposing metal arches reminiscent of the train tracks that mark the passage to the station. Next to it are small boxes that can house small businesses or workshops for local craftsmen. The flooring of the entrance path is made of stone and resin in two colours, brick red and white, outlining a floor graphic with large white waves on a red background. The walls that accompany the first section of the path are flanked by the newly planted green areas and are designed to connect harmoniously with the retaining walls of the traditional houses in this area. This is another element that links the context to its history. Approximately 450 metres from Mipo station the route encounters a concrete tunnel that was part of the old railway.

Here the “Rainbow Tunnel” installation has added chromatic dynamism to the visits: the coloured glass allows the train passengers to see the sea through a continuous chromatic mutation. The Dalmaji Tunnel is also located at a vantage point, enjoying a spectacular view of Busan and its skyline of skyscrapers. The orientation information system in the Blue Line Park was designed by Migliore + Servetto Architects as a kind of artificial nature that is introduced along the route in a flexible and precise way. The bundles of yellow stalks, smaller in scale than the access elements, become reference points for information thanks to the circular drop-shaped elements, of different sizes depending on the type of information, which clearly orient visitors. The overall vision and the precise solutions adopted by Migliore + Servetto for Blue Line Park reflect the most advanced research in the design of urban recreational areas, which are increasingly necessary to rethink the liveability of metropolises but which do not erase the past, but on the contrary reinterpret and enhance it. 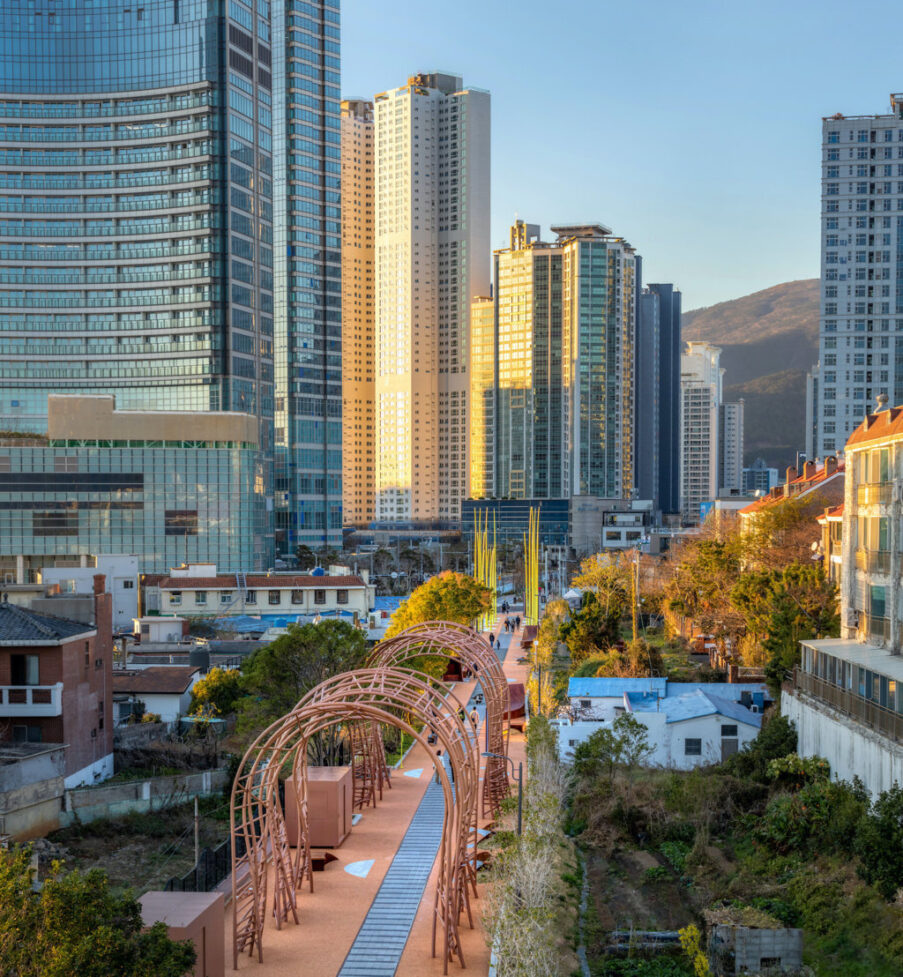 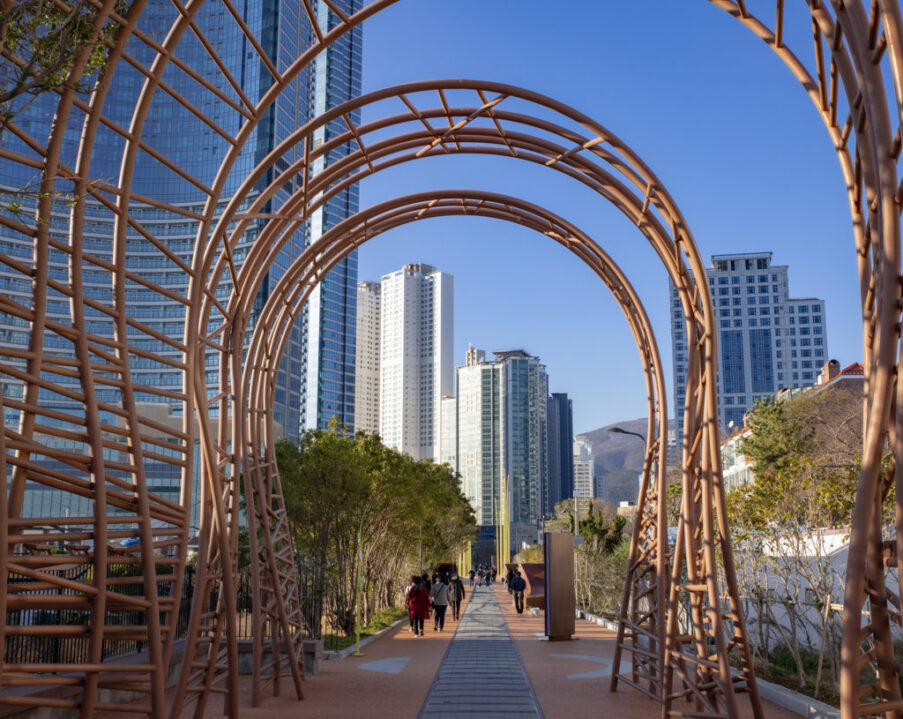 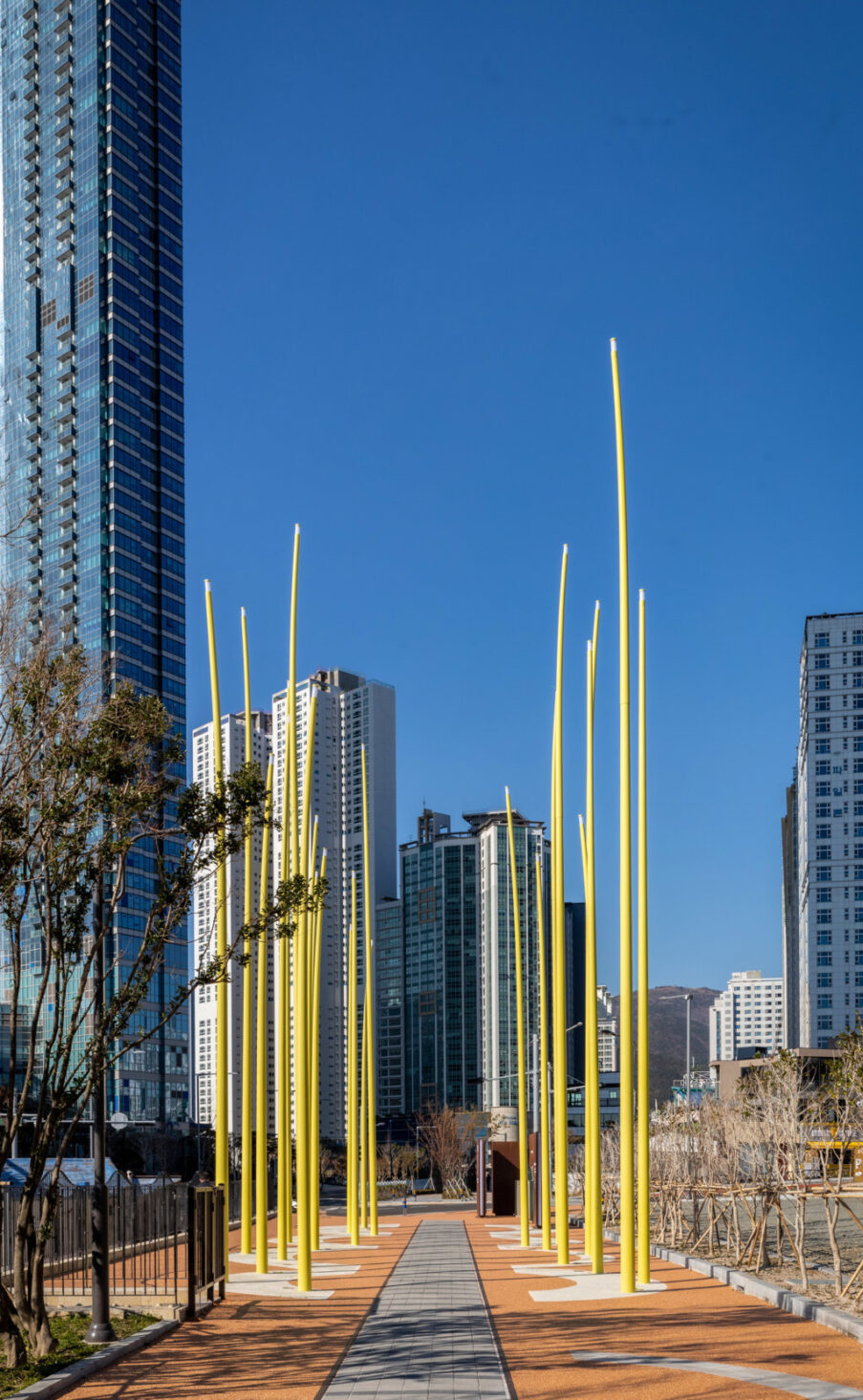 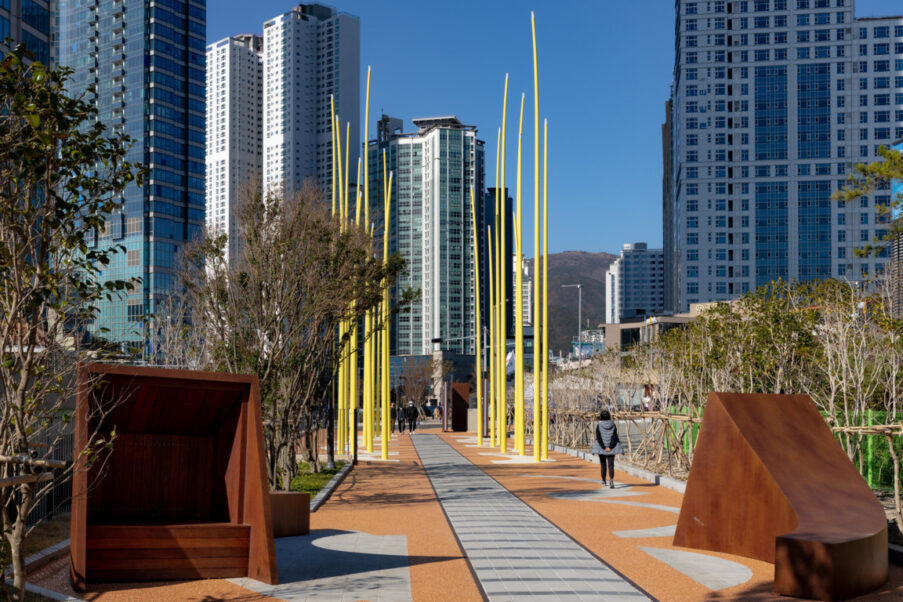 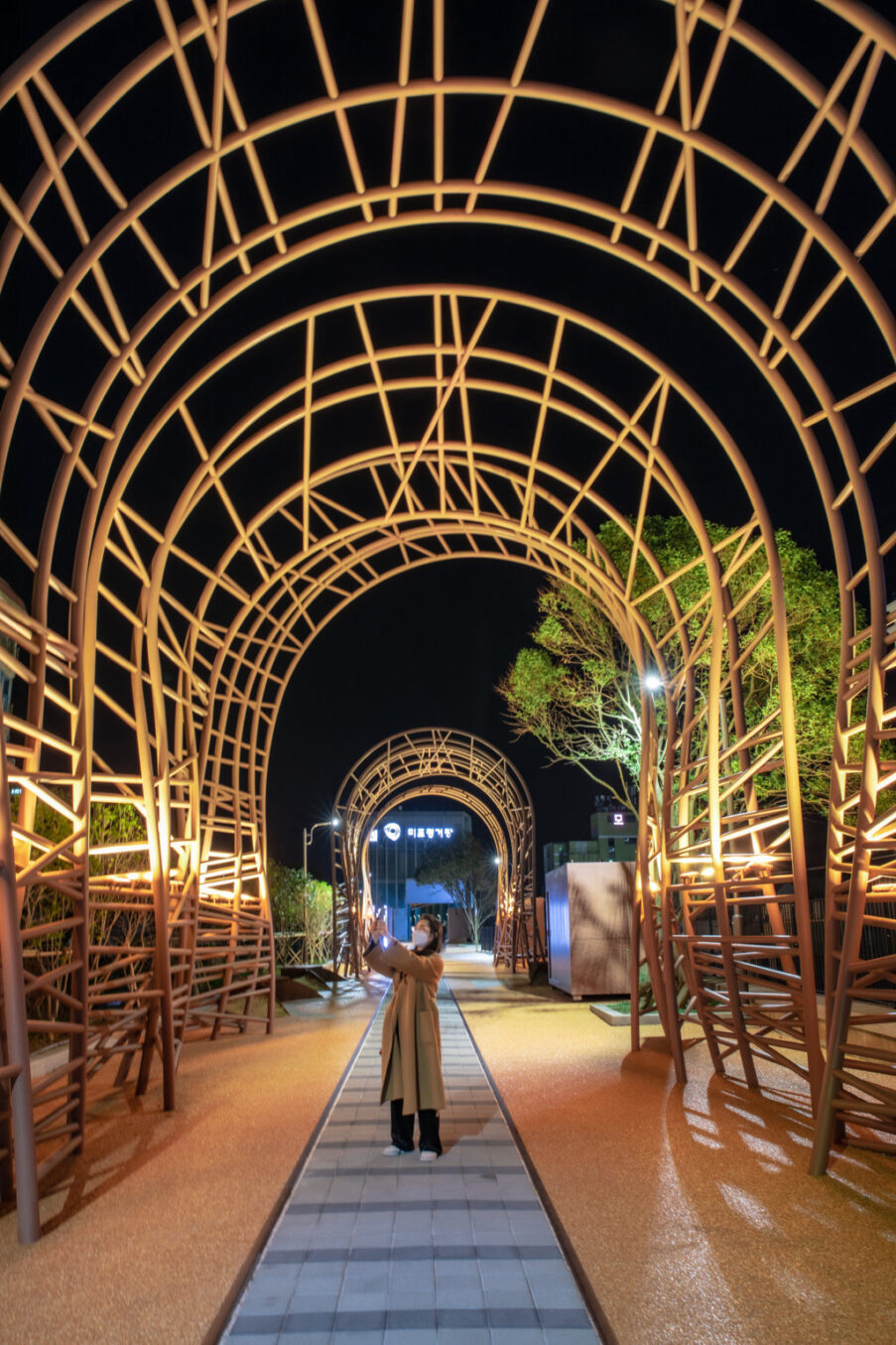 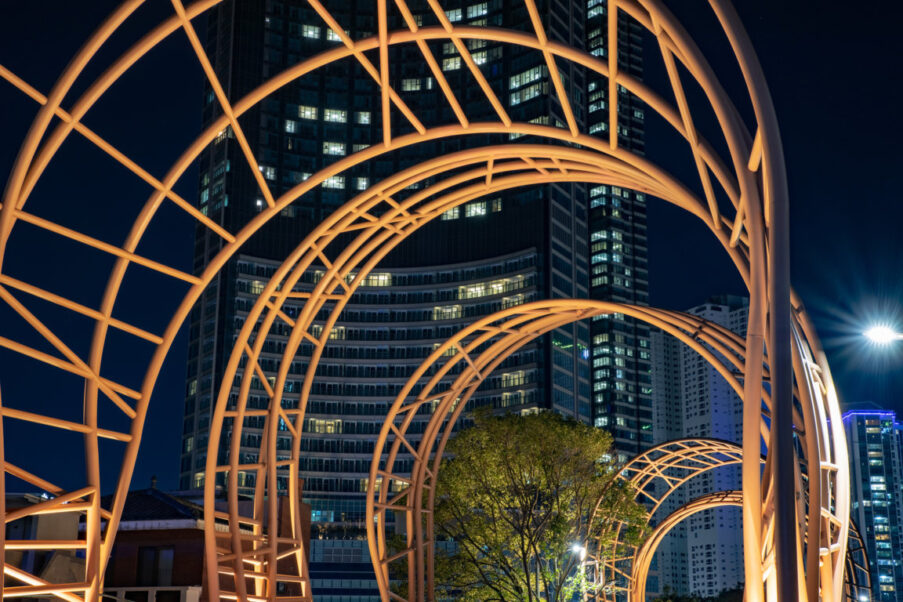 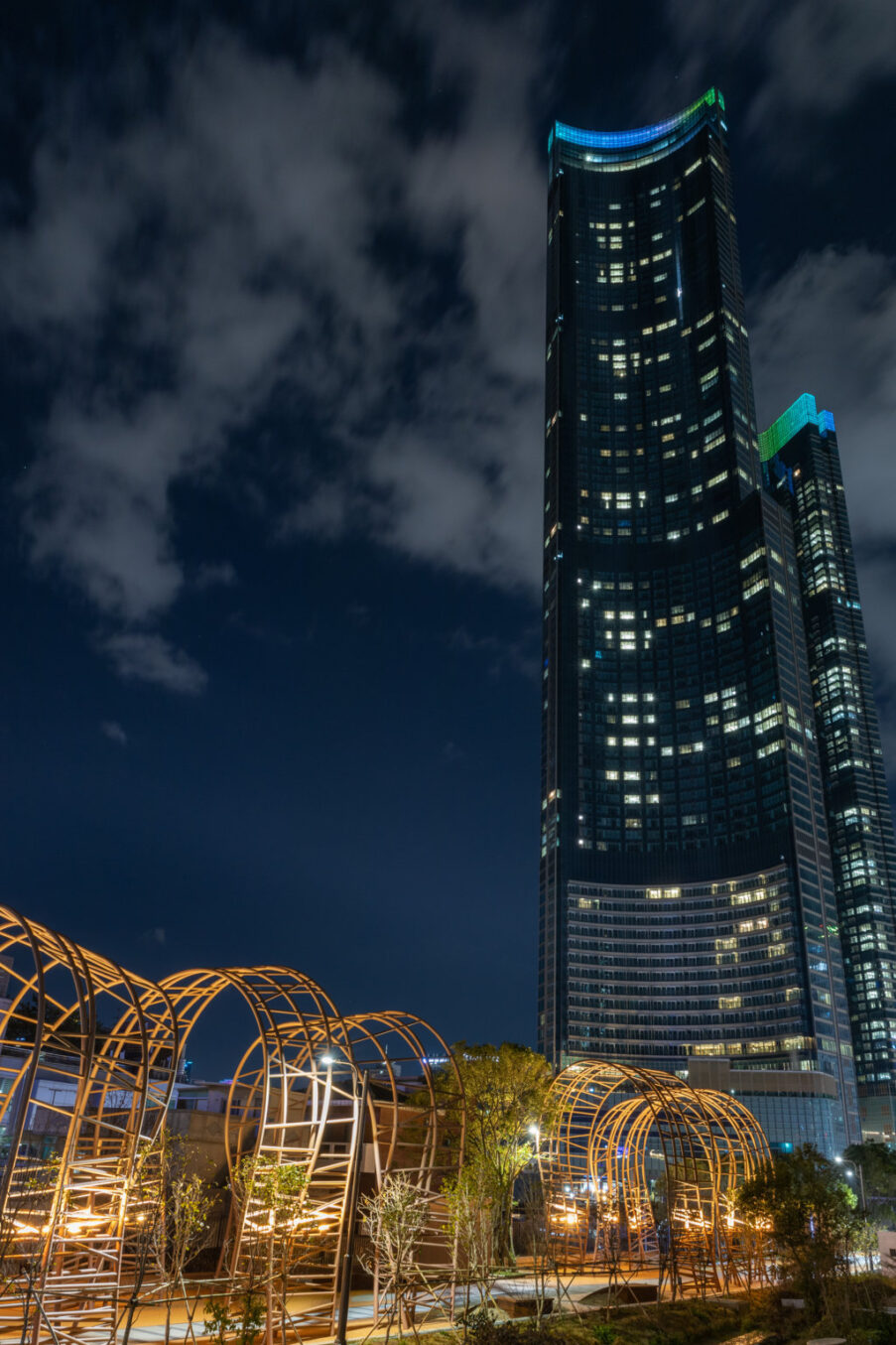 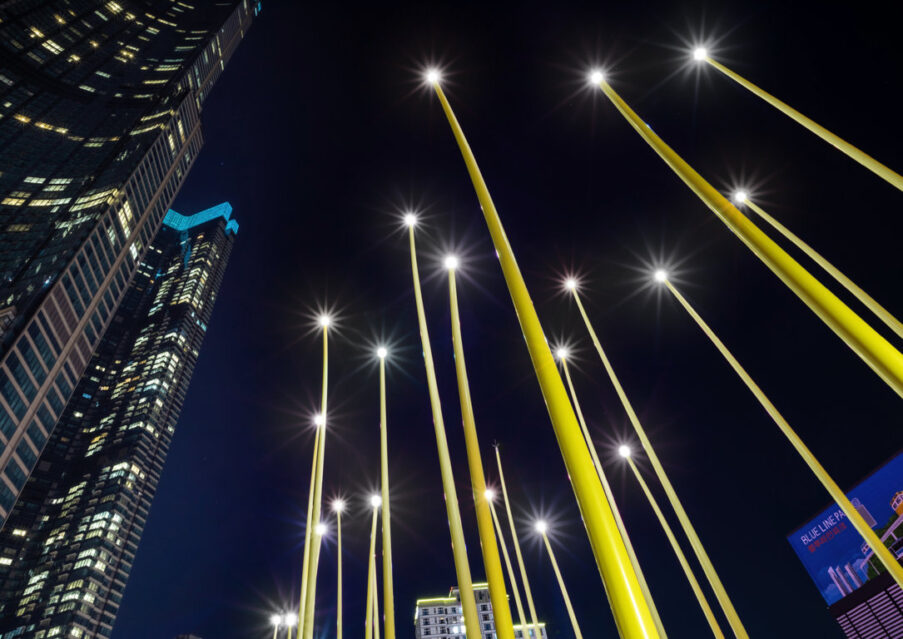 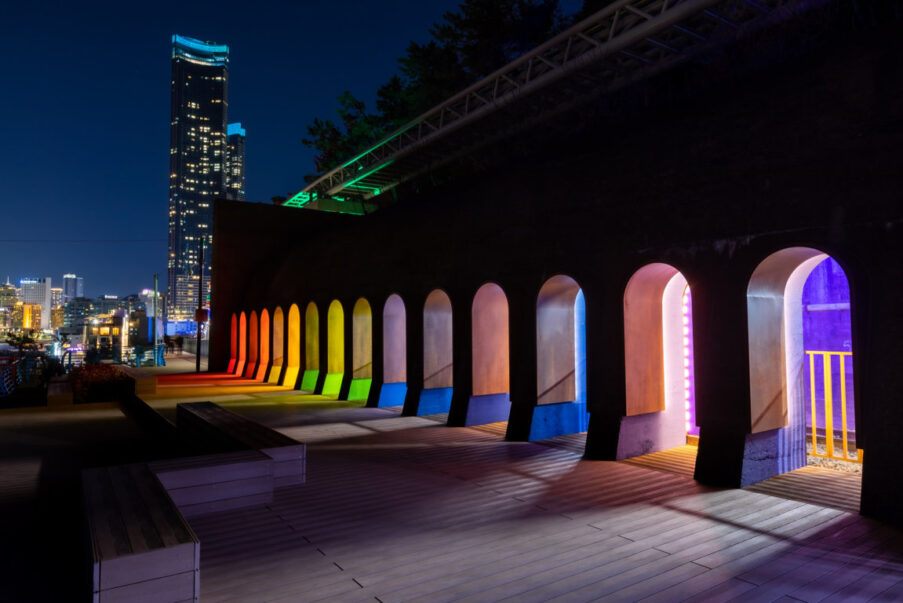 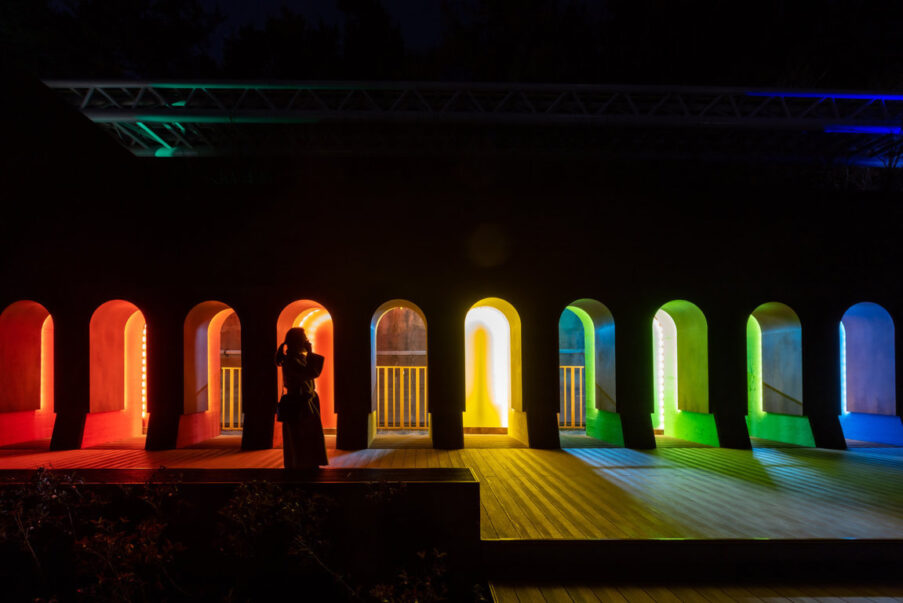