To provide the best possible service, we use cookies on this site. Continuing the navigation you consent to use them. Read more.
PROJECTS
·11 December 2020 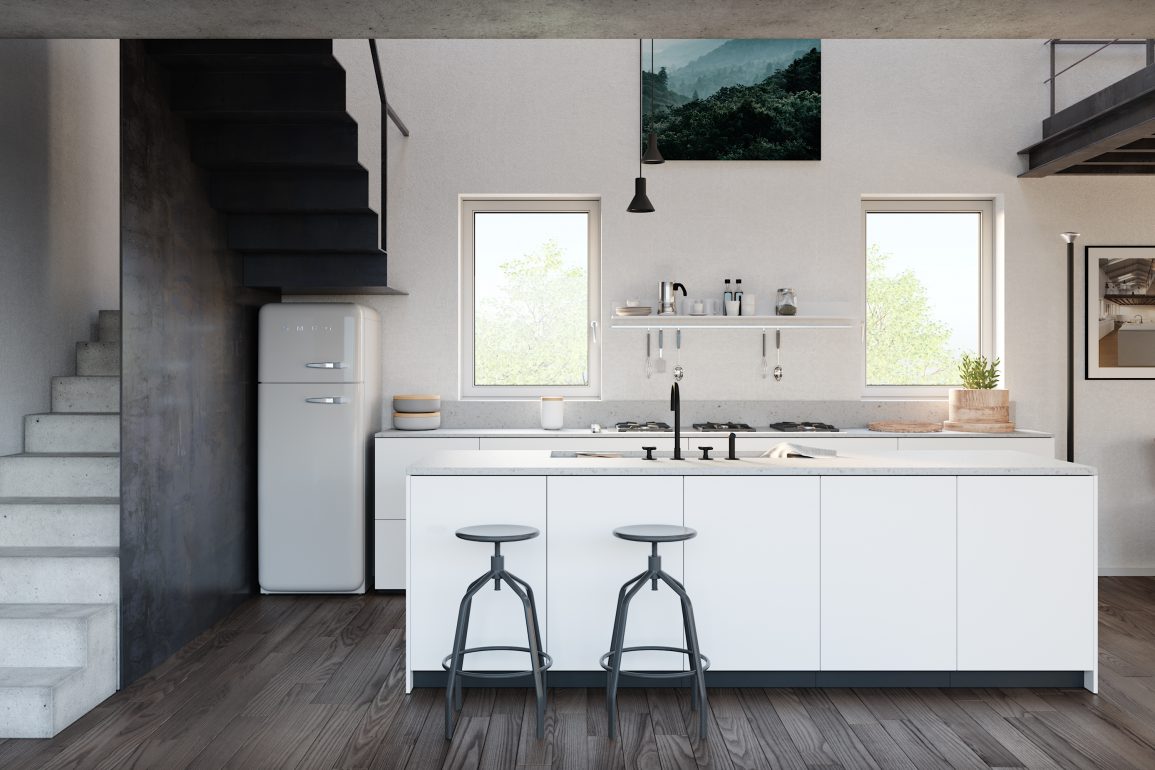 Part of the renovation process of an independent building in the centre of San Fermo della Battaglia (Como) included the development of a project dedicated to one of the four residential units of the structure. This task was overseen by A+B2 architettura, which was able to exploit the space, volumes and light, characterised by natural, raw materials and the brightness of white.

The flat on which the studio worked is arranged on several levels, with linear, well-defined forms.
The entrance is positioned at double height from which you access a lower space, made with a black ceiling in natural iron at sight. Continuing on, we arrive at a second space in the living area, again at double height and created thanks to a light glass extension with a loggia. On this same floor there is also the kitchen, the dining area, a small sitting room, a guest room, the bathroom and a service room.
This arrangement positions the central area of the house enclosed between the lower loft entrance and the walkway connected to the upper floor, which divides the spaces by an iron sheet 5 metres high and 1 centimetre thick.

Spatial perception is emphasised by a reinforced concrete walkway, made as a single 6.5 metre block that seems to float in space, defining the upper floor, serving as a link and subdivision of the rooms.
The sleeping areas, which are more closed and private, are differentiated from the living areas, where the open-space style prevails. In fact, the master bedroom on the second floor is inserted at the head of the building and separated by a wall, while the relaxation area is obtained from a completely open space.

The absence of a ridge beam gives the exposed roof a contemporary, minimalist character, while plays of light and shadow are emphasised by the presence of skylights and hanging lights that reach double height, allowing the living area to be illuminated by ambient light.

Details of light and brightness of white, spatial cleanliness, in strong contrast with rougher natural elements, such as iron and cement, give peculiarities to this living project.
The starting point has been interpreted as a clean, white box, inside which decisive elements have been inserted with an arrangement that enhances the division of spaces.

Fabio Andreani, Federico Bianchi and Pietro Giotto Balzarotti are the three architects from the Academy of Architecture in Mendrisio who founded studio A+B2 architettura.
Their projects touch on areas of different scales such as accommodation, residential construction, interior and product design.
Their style stands out for its minimalist and consistent character in the various projects, for its essential lines, quality materials and use of neutral colours. Moreover, the careful study of space and lighting make their architecture decisive, sober and rigorous, internationally appreciated. 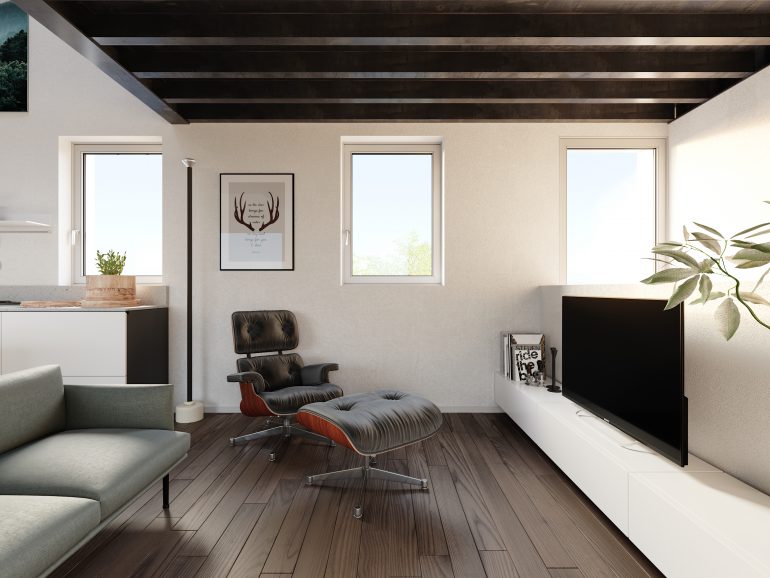 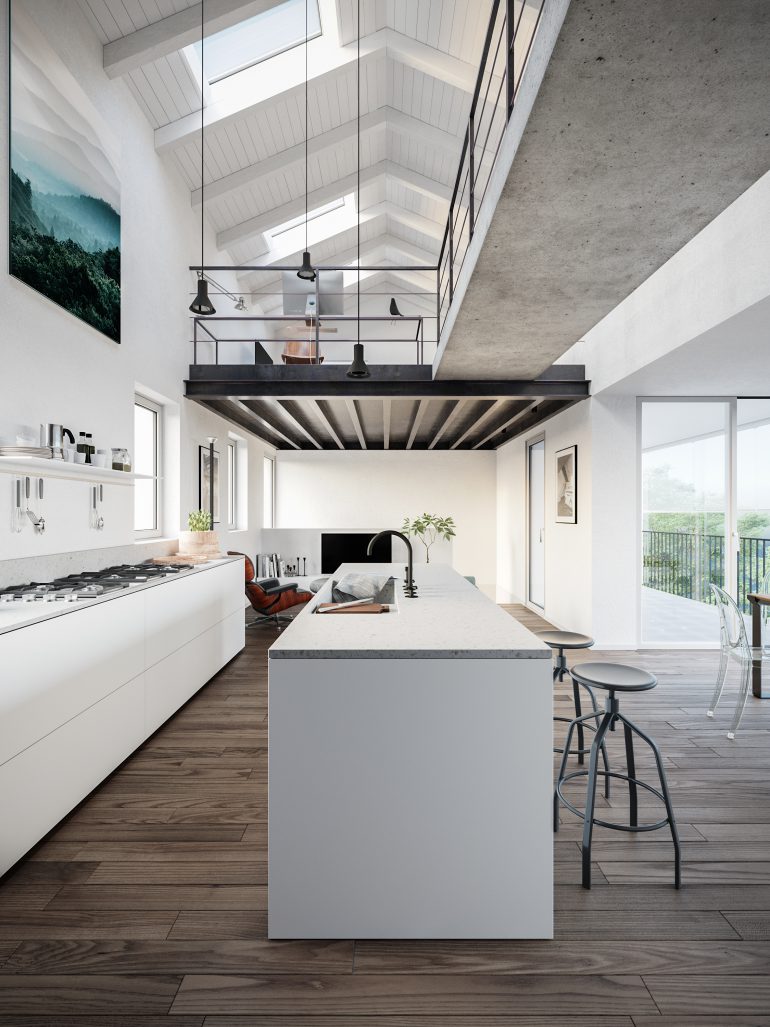 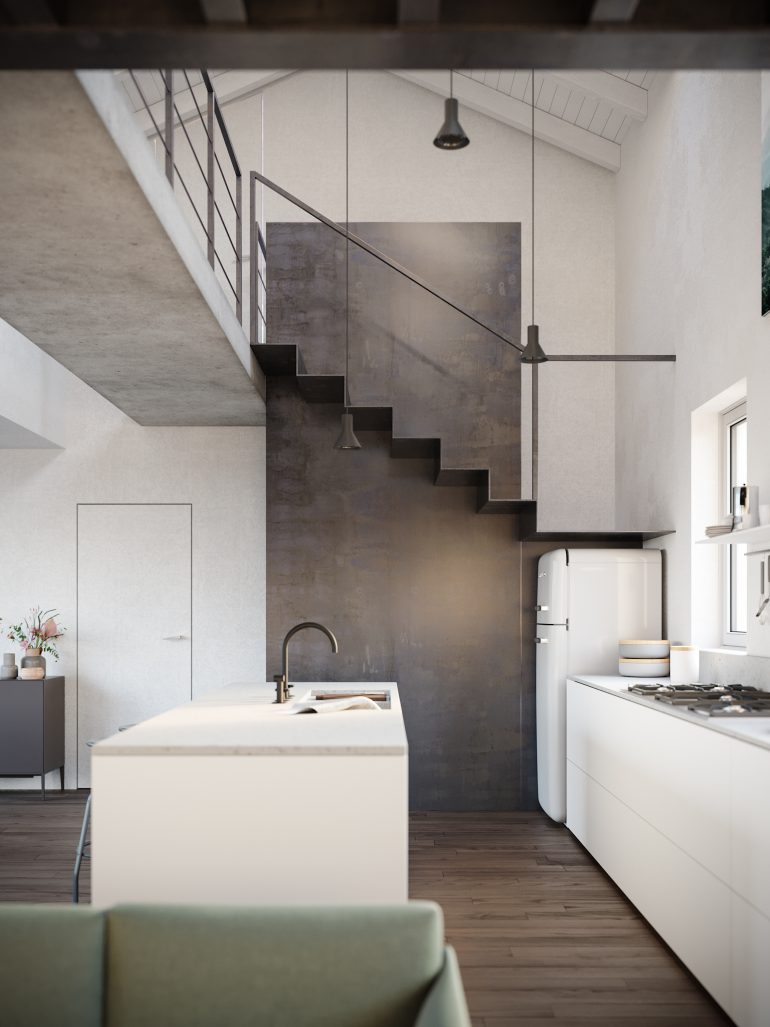 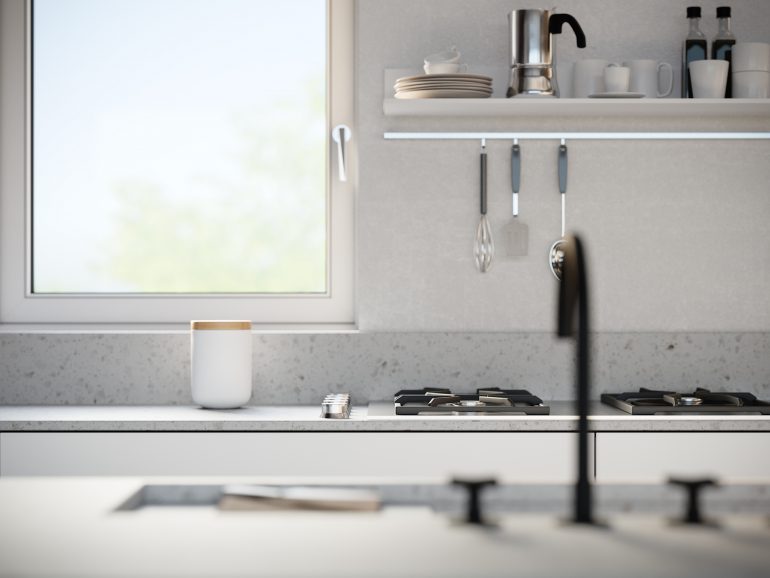 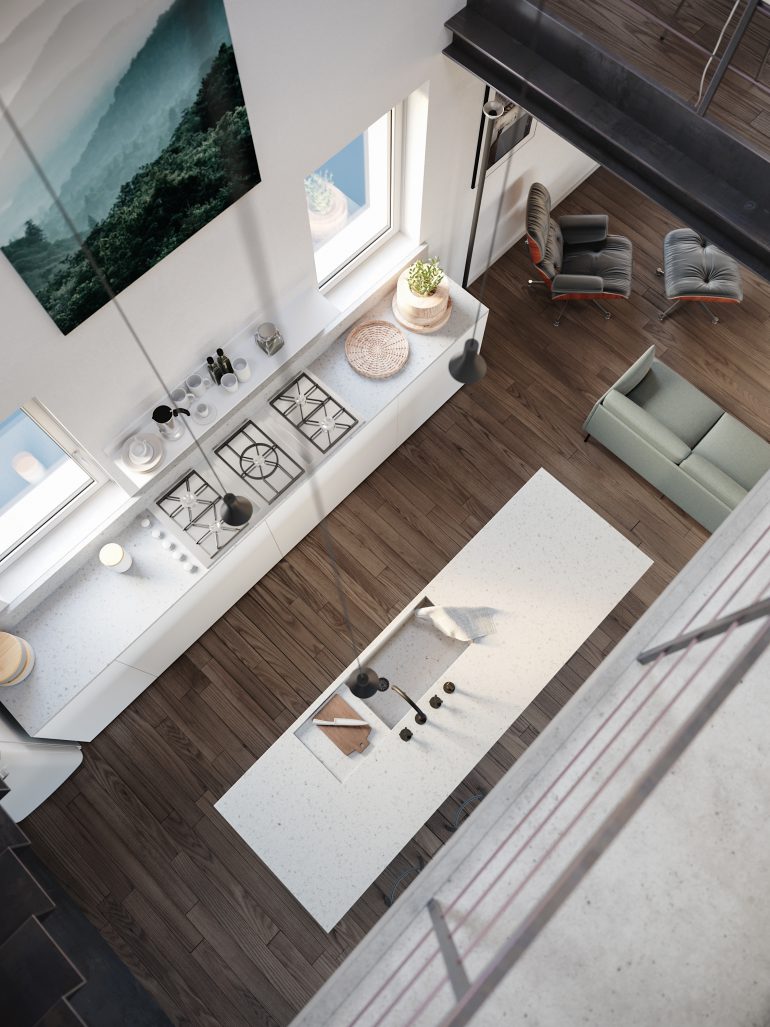 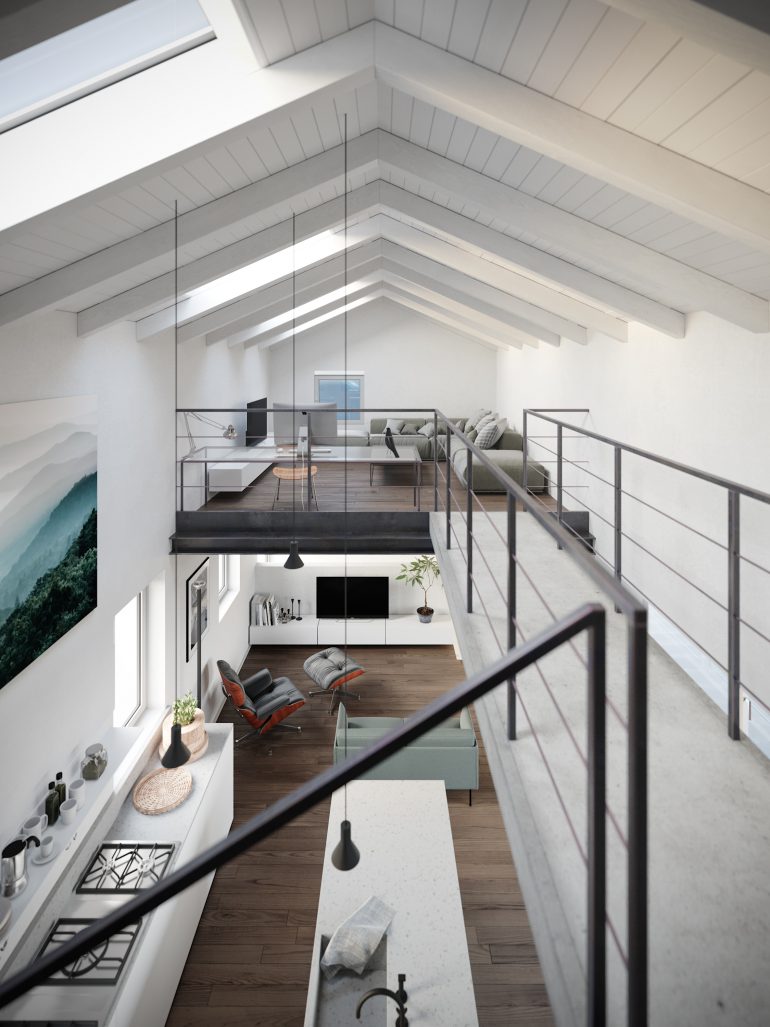 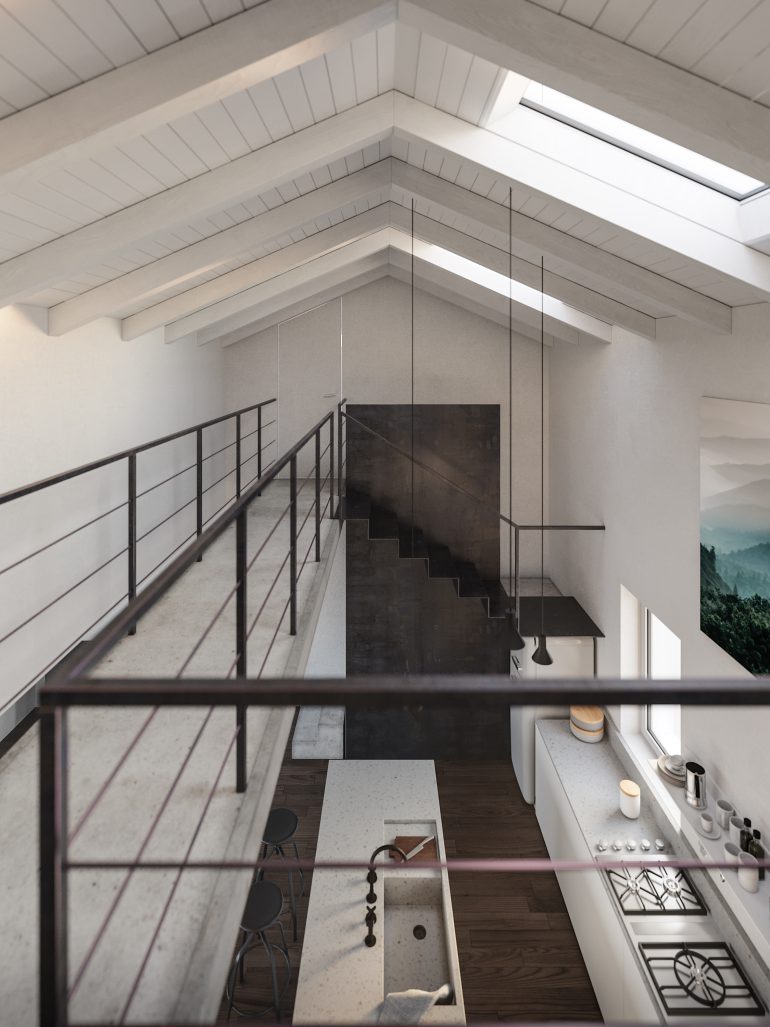